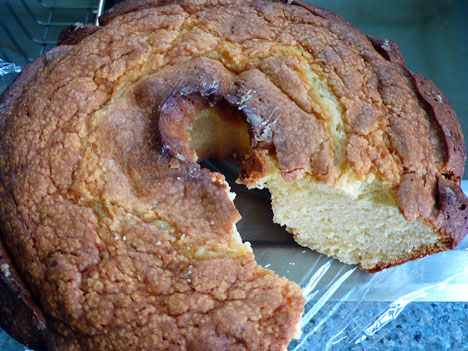 our knitting class christmas party is today and i volunteered to bring dessert. now, we’re not a fancy group in general, but for the christmas party we do things a little differently—we meet at someone else’s house, we bring yummy finger foods and have a small gift exchange. there may even be imbibing. so, you know, i want to make a nice impression.

in keeping with the holiday, i decided that an eggnog cake would be just the thing and went in search of a recipe. we used to make one at home when i was a kid, that was featured in holiday ads for some food company or other, during the 60s or 70s. i couldn’t locate that recipe but i found this one, which sounded great.

i borrowed a bundt pan from the neighbors and got started early yesterday afternoon. there is a lot of beating in that recipe—to the tune of about 20 minutes total, i think—but it’s definitely worth the work; by the time it goes into the pan, the batter is velvety smooth and the resulting cake texture is absolutely sublime (it’s a pound cake type)

creamy, moist, and yet . . . light. it could use more nutmeg than the recipe calls for, but that’s quibbling really.
sooo—what’s the problem and why is that cake being eaten at home??? 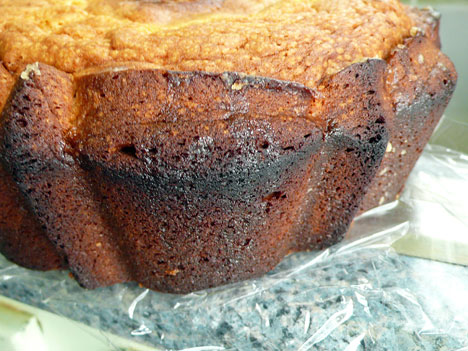 this is NOT the recipe’s fault. sigh.
i think my %!#*&@^ oven is on the blink again. grrr.
i had a vague suspicion that i should check it out, when when i baked some fish the other night that took WAY longer than usual to cook.
but i forgot.

then yesterday, i put the cake in and waited. and waited. and waited.
the stipulated cooking time came and went, but the top and center of the cake were still liquid. when they were finally cooked and the cake had cooled a few minutes, i unsheathed it from the pan to find that the bottom and outside edges were charred.

that’s what happened the last time the oven went.

david suggested i try one more time, using a recipe that always turns out well, so i proceeded to make my apple cake, which is also festive and pretty enough to bring to a party. this time we put our old thermometer in the oven with the cake to see if the temperature was regulating properly. 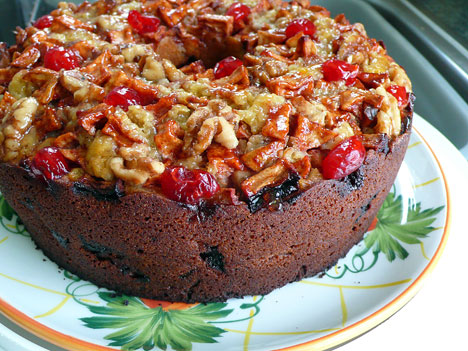 the temperature actually varied widely over the course of the cooking time (NOT good). and the upshot was about the same—i had to leave the cake in the oven a lot longer than usual for the top and inside to bake through, leaving the bottom and outside somewhat, er, over-browned. 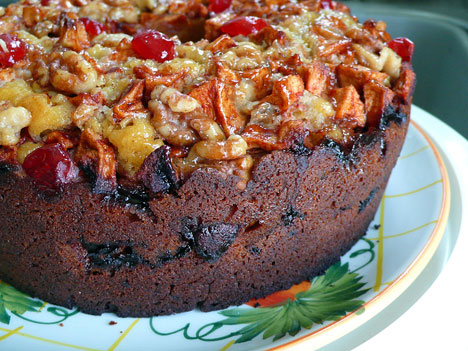 not as bad as the first cake, which was truly black-bottomed. but not good.

the top though, is a glittering jewel of a thing—and just might redeem me 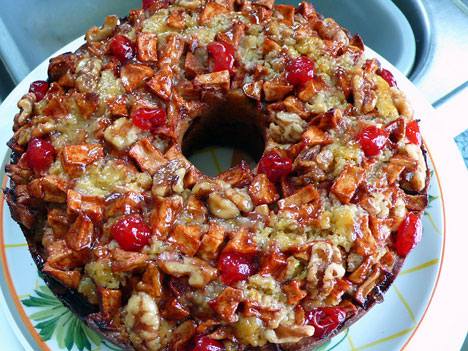 david thinks i should bring it and tell everyone to eat all but the bottom edge, haha. and you know what? as we are a very forgiving group, i think i’m going to do it—i know the cake is delicious; it’s always a hit. and it’s not like baking another thing is going to be any more successful.

the thing is this: i am a perfectly competent baker, capable of making an excellent cake. yet, every time i bake for this particular group of people, something goes wrong. i have bad baking karma when it comes to them. so they have never been treated to my best baking efforts and i feel bad bringing yet another dessert piled high with apologies for the state it’s in.

on the other hand, things could be worse.
everyone gathered there today is a fortunate person—we each have a good, warm place to call home, a secure (for the moment) living, plenty to eat, a little cash to spend on yarn when we like, and enough leisure time to meet and make merry on a pre-christmas monday afternoon.

plus i have killer gifts for everyone, heh.
so now that i’ve talked that out with you, i’m going to let it go and let it be—i’ve got other holiday concerns to obsess about, after all.

besides, just when i thought things couldn’t get more depressing in the kitchen, i saw this and was reminded that rainbows do sometimes appear in the unlikeliest of places 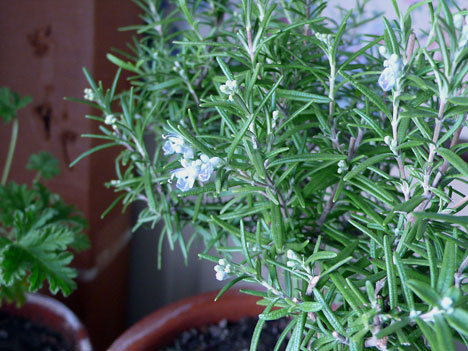 looks like we haven’t seen the last of my garden after all—my rosemary plant is covered with buds and tiny blooms!

now, i’ve heard that rosemary sometimes blooms, but it’s never happened to me.
i feel girlishly tickled pink about it. this plant has lived in a pot since it came home from the nursery in may. to amuse myself, i kept it pruned into a (more or less) round topiary shape 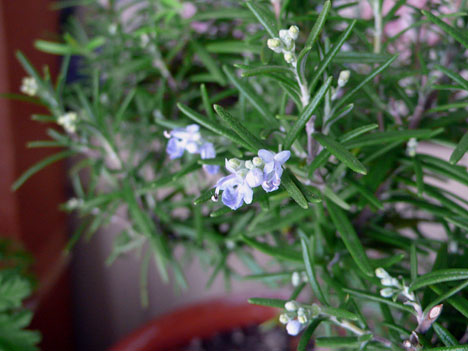 i don’t know if the constant pruning helped or not, but whatever the reason, i’m enjoying the chance to see it.

i even have matching buttons to celebrate, haha 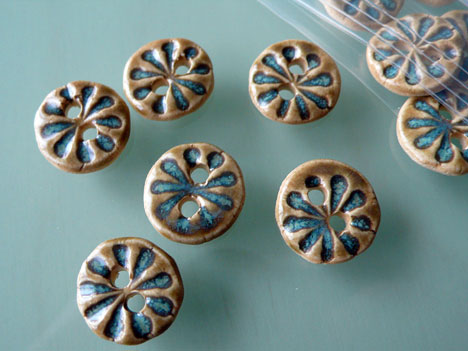 i ordered these from jennie the potter when i saw her at rhinebeck and they arrived the other day. i just love them—they will be perfect for a handspun sweater in a natural color.

we’re trying to get all the gifts boxed and organized to go out in the mail; still waiting on a couple of last minute mail-order items to go into them. the boy’s jackets are done and ready to go 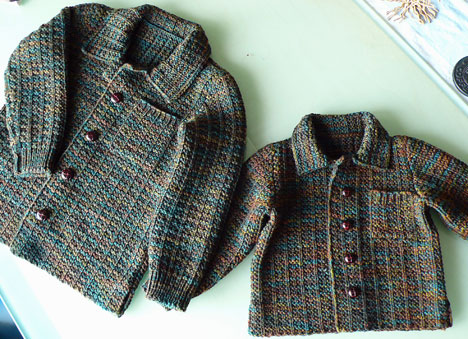 i think they turned out adorable—they are my best christmas knitting this year. focusing on just a couple of items was a good idea. we’ll wrap these up with a couple of toys and a picture of uncle david in HIS whitfield jacket and i’m pretty sure amad will be over the moon with that gift. 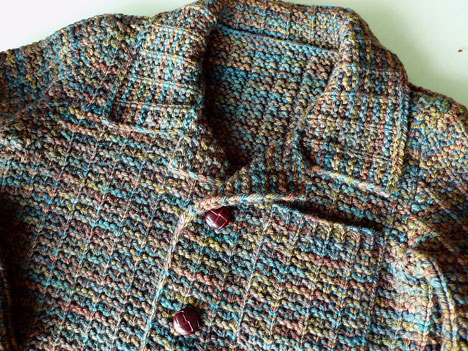 i opted for a single pocket without a flap for these, mainly because i was afraid of running out of yarn, but also to streamline the look and cut down on fussiness for the knitter. i think these are a good solution—pocket enough to be manly, but not so much that it gets heavy.

these jackets will work well for the mild, shorter winters they have in las vegas and be wearable into the spring as well as next fall. amad will love that his jacket matches his baby brother’s, too. 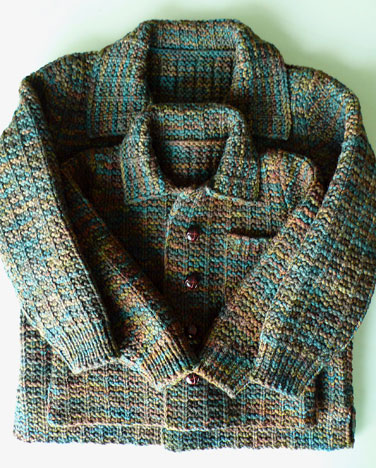 micah won’t know the difference, but some day, he may wear the bigger one when amad grows out of it. i’ll knit a third one for their cousin in NYC for his january birthday. and write up the pattern to send for sizing right after christmas.

other than finishing those up, i have not been working on a wide variety of objects as usual. i’ve been focusing ALL my attention on my super secret gift project—the S-W-E-A-T-E-R for you know who (i just love how easy it is to hide things on the blog, haha). 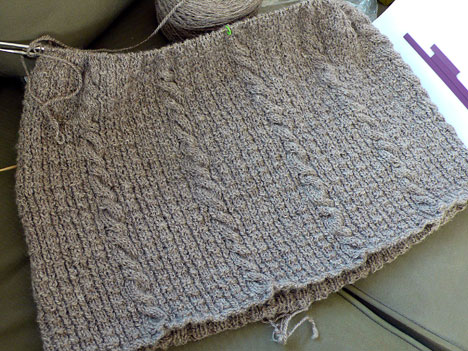 i’m almost to the underarms on the body, about two inches to go there. this has been the biggest share of the knitting—that’s 290 sts around.
it could be worse—i’m really fortunate that the recipient is not all that long in the torso or arms. otherwise, i’d be knitting til new year’s . . .

i’m also almost done with one of the sleeves

i would say i’m about halfway through this project, with five days to go. i plan on spending a lot more time knitting this week than last, so preliminarily, i think i have a good chance of finishing in time. i’m not sure yet, but i’m hopeful.

ok, now, it’s time for me to get ready to go to that christmas party i was telling y’all about—the sleeve is coming along and if we both behave ourselves, it might get finished by the time i head back home.

here’s hoping that your own christmas preparations are going well and if not, that whatever hangups you are experiencing are small ones.