the truth is, i have knit on many different types of needles, and i don’t have one particular favorite. for me, the perfect needle is the one that does a certain job really well. that could be a plastic toy needle if it’s all i have at hand.

i learned to knit on susan bates-type aluminum and plastic needles because that’s what we had, and they worked just fine, though the aluminum never felt great in my hands. i have quite a collection of the beloved short ones from childhood and from thrift stores (i love the plastic ones in all colors). even some i found in france. and then i have a veritable museum of long aluminum ones on which i knit many sweaters through my teens and 20s.

i didn’t even see a wooden needle til the 80s; i think my first siting were those beautiful brittany sculptures that double as a desk accessory! i have a pair or two, but i find them awkward to knit with.

i discovered addi turbos first at a little 10-cent store on court street in brooklyn some time around 1988. they were $7.50, which was just an outrageous sum at the time, but i desperately needed a size 6, so i bought them. the next morning i was at the door when they opened and bought the only other 3 pair they had, thus dessimating my grocery budget for that week (i had a $350 floorthrough apartment too, but those days are gone forever). but these addi’s are still in my stable and going strong.

i love addi’s for most wool knitting—yarn just glides over the surface and i can zip right along. the more slippery the better, and i even love those blunt tips; i hate when needles snag in between the plies of the wool. these generally are my needles of choice; i own a LARGE number of pairs, and mulitples of most sizes (the WIPS, you see).

(addi[cts] note: check out jeff wonderland—just sayin’.)
my greatest pleasure was this week when my friend debbie discovered addis herself—let’s just say that her response was worthy of a booth at the back of an “adult” bookshop.

for socks, i prefer my inox gray metal needles above all others, though i sometimes use wood ones to take advantage of that .25mm difference in diameter that they offer. again, the more slippery the better.

once i started seriously lace knitting, and using finer yarns with different fibers (don’t ask when—i honestly can’t remember, but it was before 1991), i realized that i was working too hard to keep the stitches on my addis.
i cast about looking for a new solution. wood circulars were a rare commodity then, but somehow i stumbled across susanne’s ebony needles, and a new love blossomed in my life. i bought one pair (they were like $12, a SERIOUS investment at the time) of size 7s. i loved them so much that i tailored all my shawl knitting to the size 7 needles.

then this year, it occurred to me that i might be able to treat myself to some more sizes—you know, as a reinvestment into my pattern business. they don’t come in a full range of sizes, but i got what they had under size 7. once these needles are broken in, they become more and more burnished as they are used, and they are lovely.
i also checked out the rosewoods while i was at it, having never owned a pair, and being curious because some people really love rosewood. and, i wanted some in a lighter wood (my eyesight fails me sometimes now).

well, that experiment wasn’t such a success. where the ebony needles have a beautiful, tight grain that never snags (in my experience), the rosewoods were frought with quality issues and i had to send several pairs back.

which brings me to my point (AH! she has a point here . . .). since i was returning some, and thus had a credit, and since the vendor also sells the much-touted, but normally-out-of-my-price-range colonial rosewood circulars, i took the plunge and asked for those as a replacement. and today, they arrived!

i know, big anticlimax, right? but such is porn—it has to have buildup and letdown, or the real climax just won’t be fulfilling . . .

hand-forged needles from CELTIC SWAN. you might remembert that i mentioned i was trading the mermaid socks 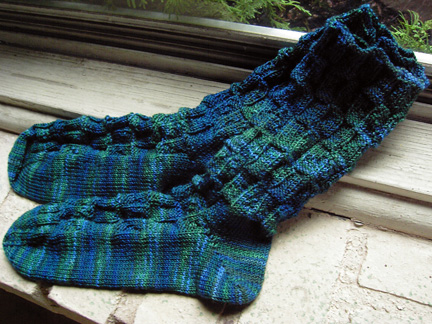 for some needles? i know some of you were concerned about the trade-off there, but now you can see what the deal was—pretty nice, eh? i’m gonna try these out later tonight or tomorrow and let you know, but wendy says she loves hers, and i trust her opinion (she got the silver; these are the brass). they feel a bit heavy, but not as heavy as the dreaded knitpicks ones, and the grooves should help counter the heaviness by keeping the stitches on.

14 thoughts on “please needle me”