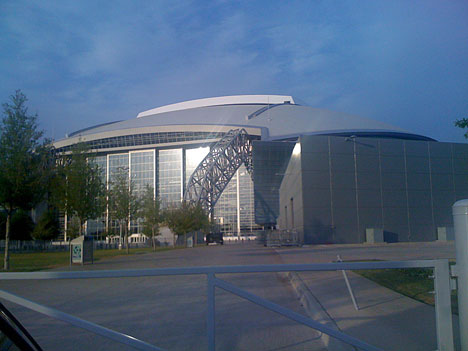 i am SO not a football fan or even knowledgeable about the sport (i know—for shame!), but even i was impressed with the dallas cowboys stadium.

but before i get going on a whole long post about dallas, i bet you all want to know who the kollage budding apple giveaway, right? 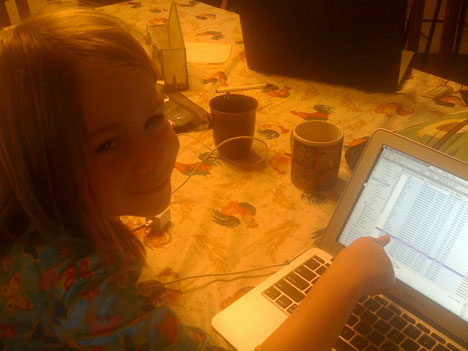 well, my niece mary is sitting right here next to me (because she’s home “sick” from school), and i was able to interest her in “helping” me out by picking the winner while i whirled the email list of comments (it’s totally fair and random, since she’s much more interested in looking at the camera than at the list. and tina, just so you know, she’s now completely addicted to pocket frogs, which is all your fault).

anyway, she put her finger on a comment by . . . . maria h!
congratulations maria; i know you’ll enjoy this kit (maria has knit many many knitspot shawls and i missed seeing this year’s efforts at sock camp, as she was not able to make it this year). 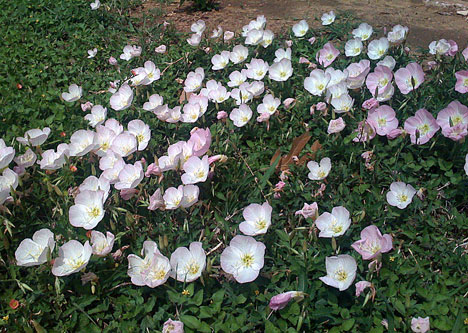 ok, now let’s take a little tour of dallas . . .
i arrived last tuesday evening to some awesomely lovely weather—balmy, breezy, and sunny. i succumbed to a good night’s sleep and a later-than-usual wake time at the incredibly comfy hotel in which i was booked for the week. once refreshed, it was off to the shabby sheep for my first day of classes. 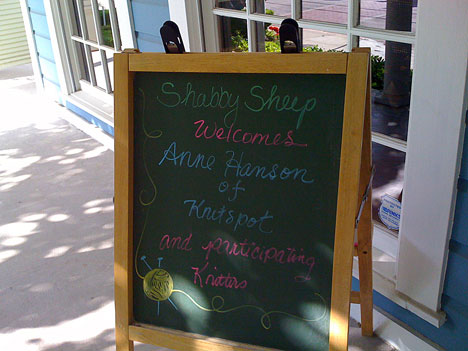 the shabby sheep is an incredibly cute and well-appointed yarn boutique and knitting workshop located in the heart of the charming historic district next to downtown dallas.

with plenty of nooks and crannies to explore both in the shop and in the surrounding neighboorhood, it’s the perfect destination shop for a day out with knitting friends.

owner ronda van dyk has filled the shop with a delicious range of yarns and fibers, notions, tools, patterns, and books. there is an interesting class and event schedule, as well as weekly knitting nights, attended by regulars and drops-in guests alike. 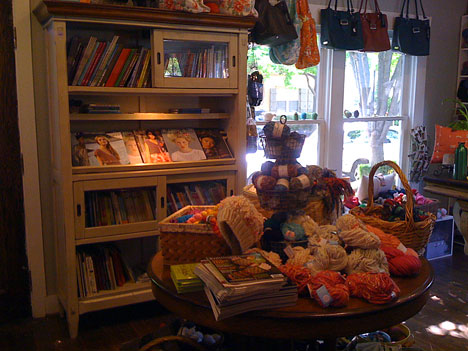 i was to spend two full days teaching lace and sweater fitness classes, as well as a lecture to go along with the trunk show one evening. 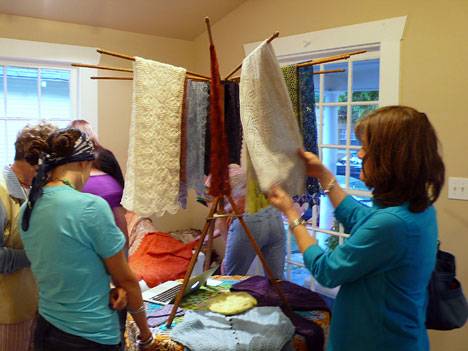 we had a lovely evening, talking about design, yarn, and shawls; everyone had a chance to look at some samples up close and personal, which is so different than seeing them in photographs. 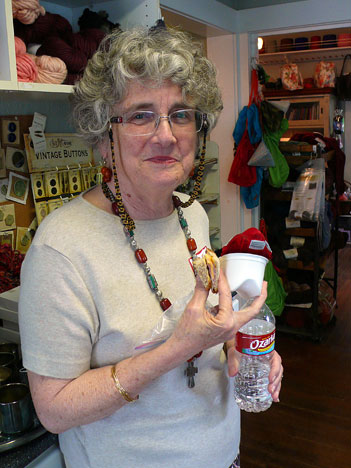 leahe, who works at the shop, came to every class AND the trunk show AND she brought her daughter along for the evening presentation; she was so helpful too; i really enjoyed getting to know her. 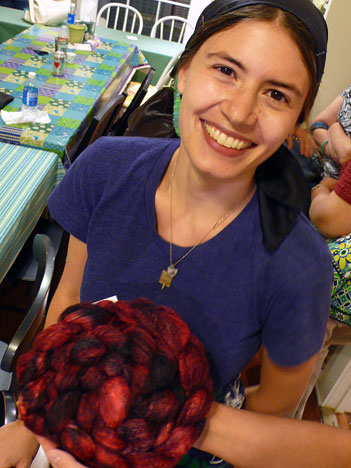 and then there was maria, who i finally got to meet in person, after a couple of months of trading emails as she arranged my class schedule. maria brought her beautiful fibers along, too, which she dyes by hand with her partner ceylon to sell in her etsy shop, two if by hand. they offer a yummy assortment of fiber blends and colorways; each dyer has her own distinct “voice”. 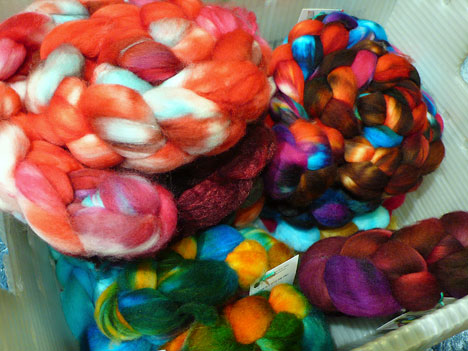 (when mary saw this photo, she shouted, “WOW, those are REALLY pretty”. she doesn’t even spin . . . . yet. but she may have potential, whaddaya think?) 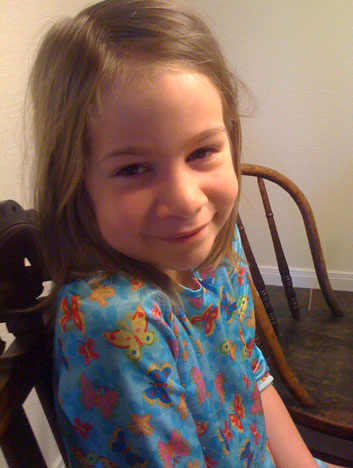 i may have succumbed to a couple of special bumps at the fiber show this weekend . . . even though i do not need more fiber.

my days and evenings in dallas were completely booked from morning to night, but i still managed to get a little knitting work done 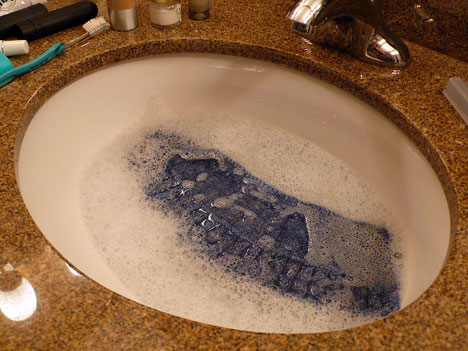 i soaked and blocked my eliza neckwarmer before i left my room on the first day and by the time i got home that night, it was dry. the next morning i added the buttons while i drank my coffee 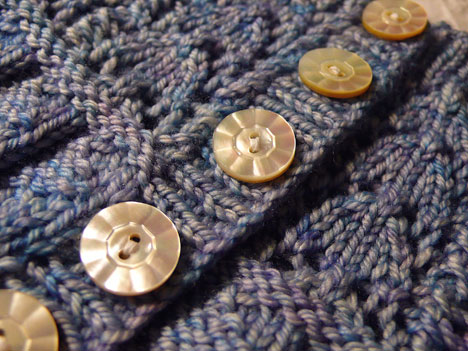 karolyn helped me pick them out during our visit to churchmouse yarns in seattle—we were both smitten with the adorable pleated rims to match the pleated hem of the piece. plus, they have a hint of pink in the shell, to go with the hints of pink in the yarn.

lovely! now i need to finish up the pattern so agnes can test knit the matching rectangle scarf. i’m hoping to do that tomorrow. 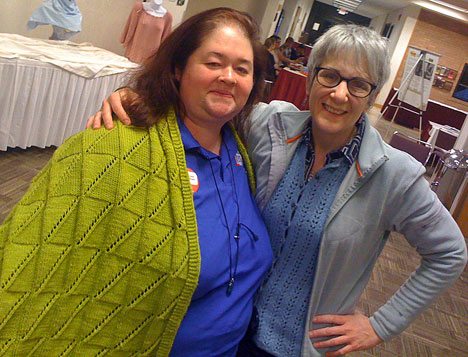 next on my dallas itinerary was to spend the weekend teaching at the DFW fiber fest. that’s liz, who is on the board of directors, wearing her gorgeous hypoteneuse wrap. 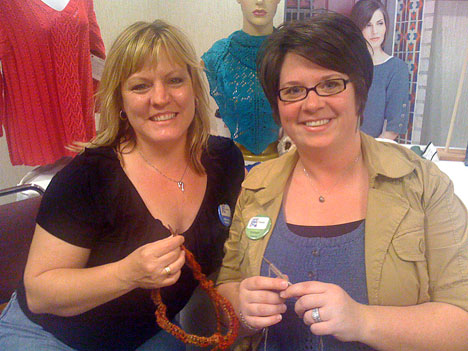 my classroom was right across the hall from the kollage booth, where erica spent the weekend introducing knitters to the lovely kollage offerings. rebecca here was already familiar with crochet and spinning, but learned to knit on friday, thanks to erica and a little downtime between activities—look at her go! 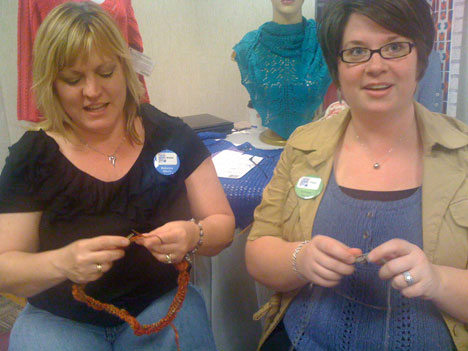 it was especially fortuitous that she won a skein of yarn as a door prize at the friday night keynote talk; she cast on the next day for a nice squishy cowl . . .

on saturday at lunchtime, we took a break to explore downtown grapevine for locations to shoot with a flat stanley that erica had in tow 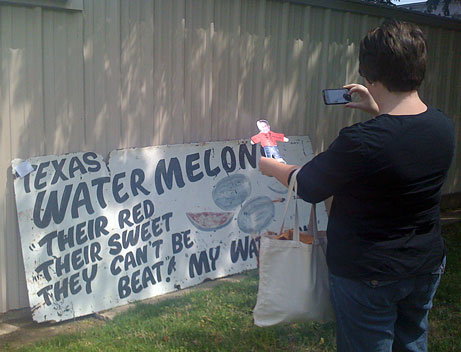 while she took pictures of the kid, i took some of the burgeoning rose bushes i saw everywhere 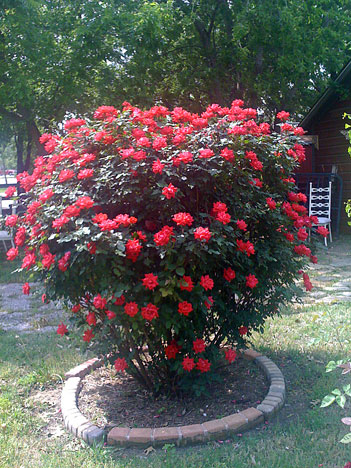 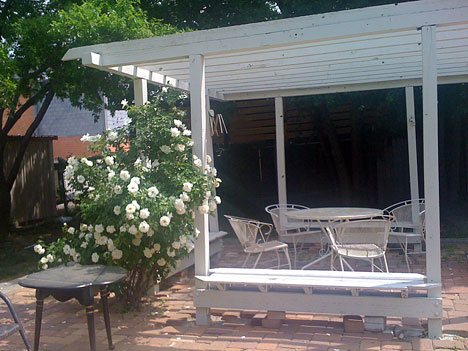 aren’t they something else?? we won’t see any at home until june . . . 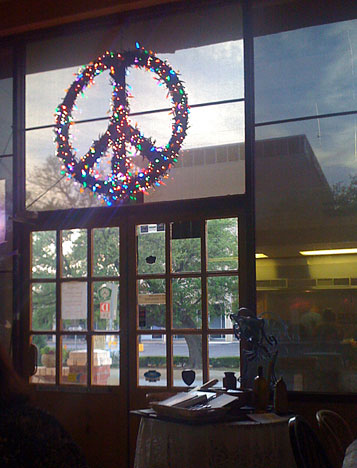 later that evening we were treated to a special outing at an area eatery that is truly like no other—potager cafe in arlington.

saturday’s menu had two meat entrees and a number of various vegetable dishes, served up in courses according to the diner’s whim. 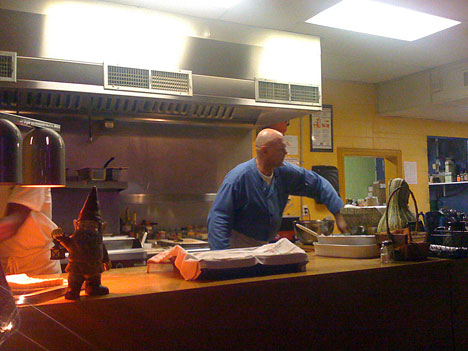 this is a little hidey-hole of a restaurant that is becoming very popular with locals and with good reason—this is the best food i’ve eaten out in ages; maybe in years. 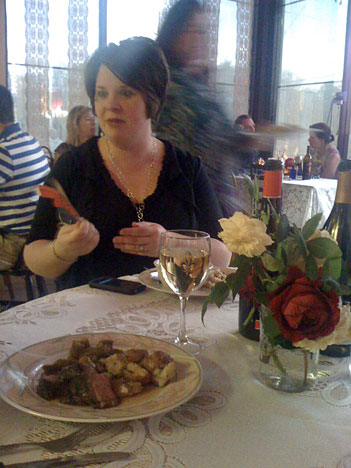 dinner ended with a strong cup of well-made espresso and a luscious dessert of fresh strawberries over short pastry. 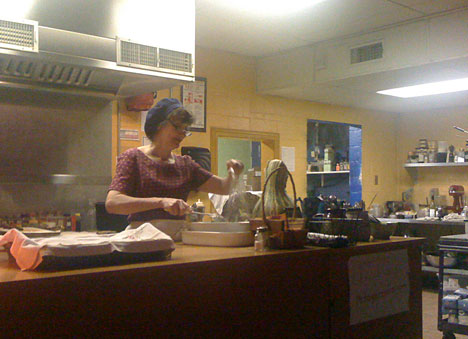 everything was so good, we didn’t even think about taking out our knitting.
what a great way to wrap up our weekend with the DFW community 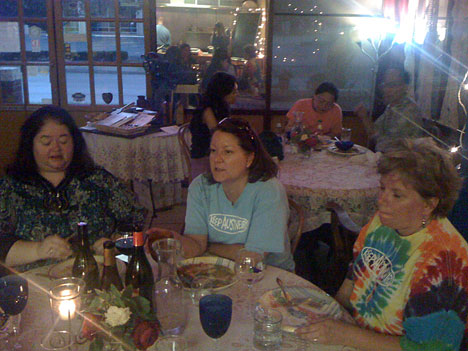 david flew in yesterday and met me at the festival, where he got to take a look around, talk to some other fiber enthusiasts, and work on his own knitting in the lounge for bit while i finished up my class.

then we piled all my stuff into the car and headed for austin, where i will be teaching next at hill country weavers—but not til the weekend. for the next few days, we’re going to relax, enjoy our family time, and catch up on a little work (but not too much!).

more later . . . we still have a pattern to release that we haven’t gotten to yet! tune in tomorrow to check it out . . .

24 thoughts on “where the sun shines”