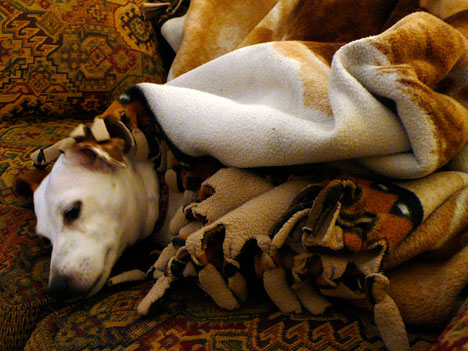 junebug cracks me up—she’s taken over ownership of the sofa blanket. when she wants to watch TV, she carefully arranges it all just so into a nest. then at night, she rolls up in it so she’s completely covered, like a cowboy. except she’s on the sofa, of course, haha.

we’ve been taking it easy here in austin; maybe not really lazy (i’ve done a lot of catching up on work, for instance), but not exactly painting the town red either, haha. i can’t believe we’re more than halfway through the week already and i’ll be getting back on the teaching horse tomorrow for a fun weekend at hill country weavers. where does the time go?

i gotta be honest; we’ve hardly left the house except to go for walks and do the usual family stuff. we tried to go downtown yesterday to see an art show, but got caught in a nasty traffic snarl and ended up heading home as soon as we got there, so we could make it to daniel’s football game. 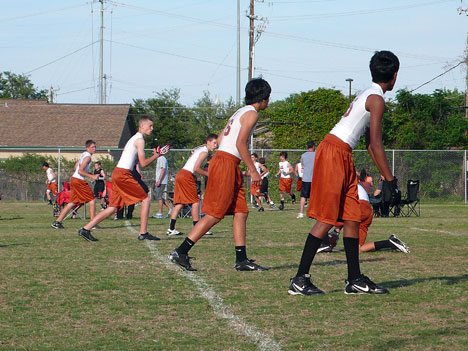 which was a ton of fun—he plays in this 7-n-7 league which is designed for middle school kids to learn the plays without engaging in full contact football (so it’s more focused on footwork and strategy). he’s number 14. 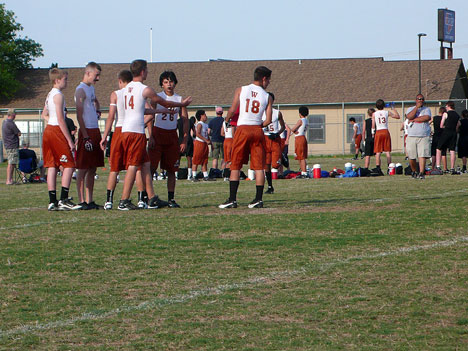 but of course, the fun part is many-faceted; watching one of our family play sports is a novelty for us (we are enthusiastic about getting out there to move and try, but notoriously uncoordinated and uncompetitive and therefore, not very good at games, haha). but daniel’s different—he takes to all sports like a duck to water and he’s very, very talented. 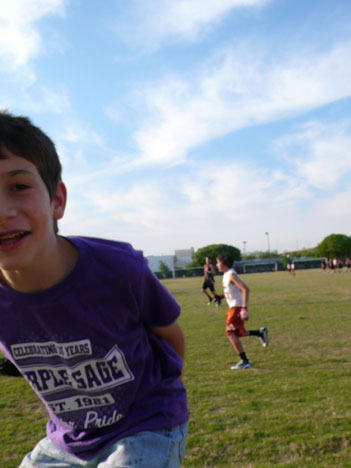 and we make a sizable peanut gallery combined, so we all piled out there to enjoy the stupendous spring evening, watch the games, and root for our team. 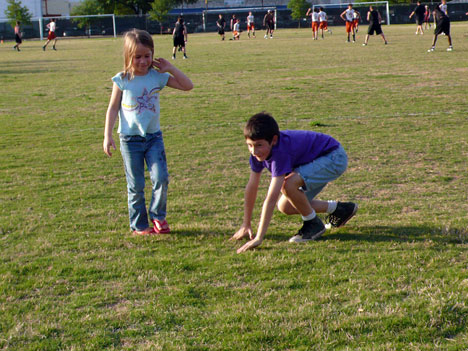 mary, aaron, and andrew took advantage of the wide open space to entertain us with tumbling acts (or more accurately, some wrestling feats). 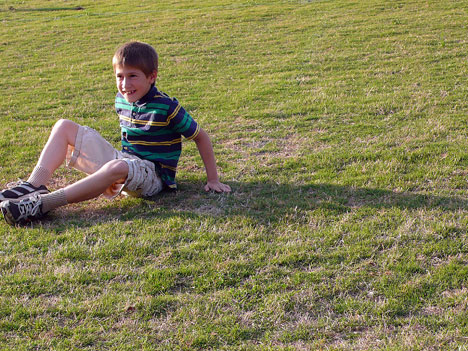 the oldest kids have been more elusive during this visit—they are involved in myriad activities of their own and they both have jobs now, so we only see them late at night.

back at the ranch, there is much to be jealous of outdoors—with the beautiful spring weather beginning in february here, it’s possible to get the garden going early and i’m green with envy over this 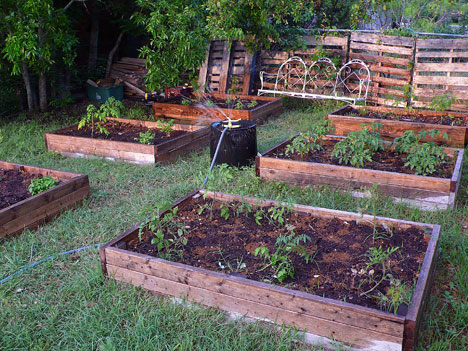 tomatoes and herbs, some already in flower. our garden isn’t even turned over yet (but then, i’ve hardly been home to do it). actually, we have it on the calendar to get out in our garden when we get home to turn up a little dirt and maybe plant some early greens, but the tomatoes won’t be going in the soil for at least another month. 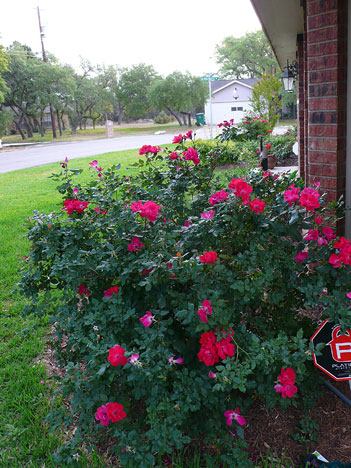 and the roses that are blooming everywhere right now—wow. my brother tells me you pretty much can’t kill a rosebush here. a far cry from ohio, where they are under constant threat from mildew and insects . . .

of course, all that also makes it prime allergy season here, which is adding to my lackadaisical attitude this week. i have been doing lots of knitting though; wanna see? 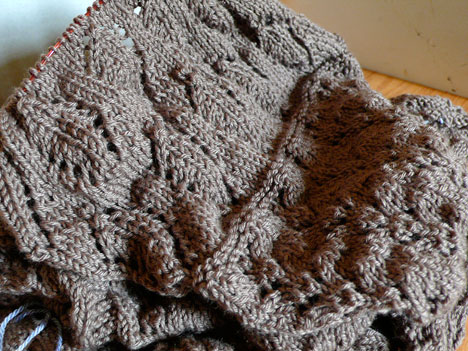 i’m zooming along on my secret project, which makes me very, very happy. you can see i’ve been through a texture change in the fabric at this point and i’m now happily knitting away on the feature motif of the piece, which is quite thrilling to construct (ok, that statement officially makes me a dork, but who cares?).

i can’t show you any more of it than that, but it’s been good to have a project well established on the needles for this part of my visit. i can just pick it up at any time and knit on it without too much need to have the instructions out—a good strategy when dealing with kids and pets in the near vicinity. 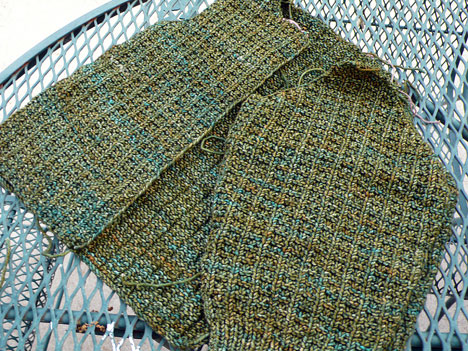 i’ve also made excellent progress on the whitfield shorty i’m knitting up in woolen rabbit frolic (colorway jungle book). i love the yarn; it’s sooo yummy to knit with and looks great in the fabric, too. it’s knit candy—every time i pull it out in public, knitters flock around to fondle it.

i’ve got just one front piece left to complete and that’s on the needles now. i’ll finish up the knitting here and then do the finishing work at home next week. after all, i’ve still got another sweater with me that has not seen nearly as much air time. for no good reason other than i only seem to be able to focus on two projects at a time; the rest stay packed in my suitcase (that’s an idea—keep some things hidden to improve one’s focus on other things . . .). once the shorty is done (probably tonight), the cable and rib cardigan will come back out.

i realized last night that i hadn’t yet shared any of the nice yarns i seem to have collected on this trip, so i thought you might enjoy a little yarn parade today. let’s start with my first stop at hazel knits in seattle, where cookie and i got to hang out with wendee and do some dyeing. 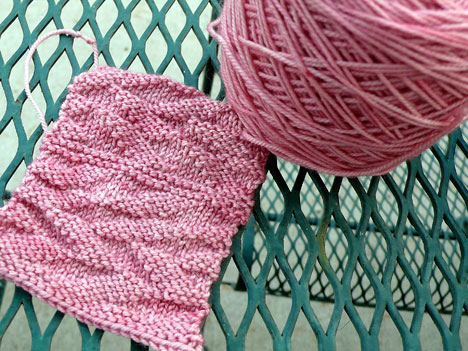 this skein of rubber-eraser pink caught my eye and i was smitten, so wendee handed it over and i’ve been fooling around with an idea for future hazel knits kit. then in the drying room, i found another temptation 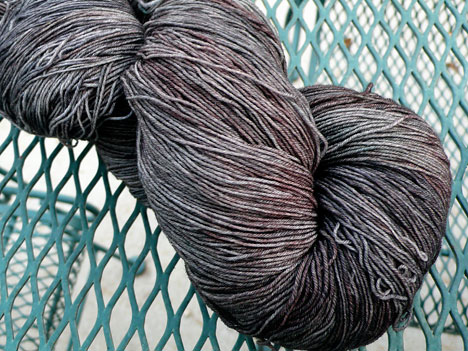 this is a fairly-new 4-ply lace base that wendee is working with called filigree. ever since working with the great northern yarns lace yarn i used for the crooked walking shawl and gray zigzag scarf, i’ve been fascinated with the characteristics of multi-ply lace yarn. there are definitely some that feel stringy to me, but there are many that are quite lovely and this is one of those. spun of the same fiber content as hazel artisan sock, it has a nice density and plumpness, while still remaining smooth and consistent. i’m looking forward to trying it. the skein is generous too, weighing almost 6 ounces and having 1200 yards—about 200 yards per ounce, which is a very nice weight to knit with, almost fingering. in fact, this yarn could make a very nice CWS.

and when i get home, i’ll get to see how my own dyeing efforts turned out . . .

next stop was sock camp, where sadly, i did not get to dye (tina and i have yet to spend quality creative time together!), but where i still managed to leave with yarn in tow, haha. 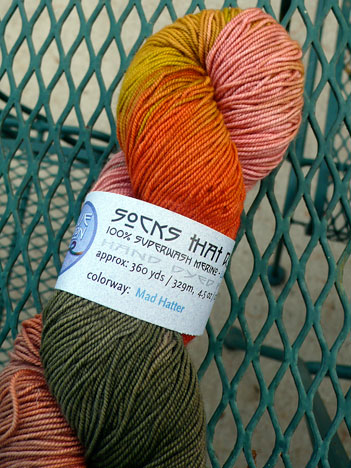 this is the skein i received i my welcome packet, in our camp colorway, which is mad hatter. so perfect—how can i NOT knit socks for myself with this?? even if they are plain ol’ stockinette, methinks i must cast on soon. but almost certainly, they will not be plain; i think i have an idea coming on . . . 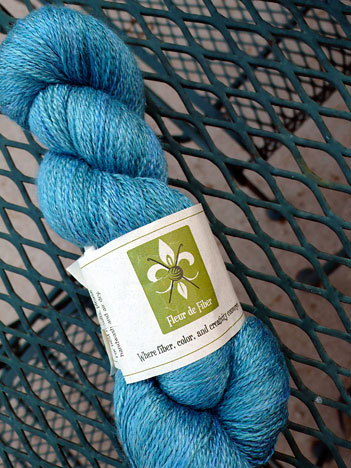 then i was gifted this gorgeous skein of blues by angela; this is her seacell rayon/silk blend, in colorway blue streak. it is the most heavenly blend of blues; i am seriously considering casting on a scarf with it before the weekend (it wouldn’t hurt to have a portable little project to carry in my purse; i’m currently out of those . . .).

next stop was dallas, as you know and there i finally got to meet susan from slackford studio, who provided the gorgeous yarn for the aria delicato and fallberry mitts projects.

susan not only treated each of my classes to a yarny door prize, but brought along a bag of goodies for me too—some of them new additions to her online shop. 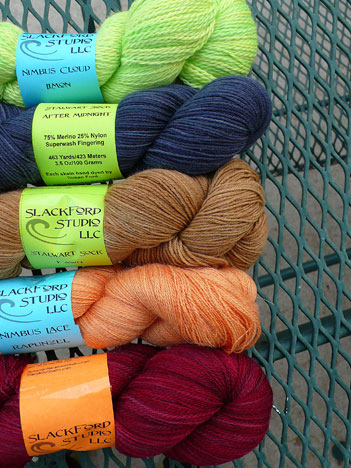 well, that just about wraps things up for the day—i think it’s time i got outside to walk that lazy dog (and myself), while david works a little longer. then, maybe this afternoon, we’ll go adventuring . . .

23 thoughts on “a little lazy this week—so far”