stephanie wrote yesterday about “ruining” some knitting, and maybe that was sticking in my subconcious somewhere, or maybe it’s just that i can’t STAND to be outdone on anything, but . . .

remember those amazing mitts i was working on from the luscious handspun alpaca? no??
let’s review the many ways in which they are amazing then:

and then, the most amazing thing of all: the flub-up of all times
because, of course, i had offered this pair of mitts as prize, presuming immaturely, that my work would do justice to all of the above qualities!

there i was last night, having missed my workout because i fell asleep and ended up taking a four-hour nap. once i finally awakened at 11 pm, i decided the only thing to do was knit until i got sleepy again. the first mitt had turned out grand (albeit, worked on the wrong needles) so i grabbed the second mitt and got going. i knitted and knitted, happily working away while david tuned us in to one saved program after another. a few hours later (and finally, i think, all caught up on the first season of the L word), i sighed as i wove in the last yarn tail and looked over my pair of mitts.

you know that oddly faint feeling you get when the blood in your veins suddenly turns ice-cold all at once (remember, EVERY yarn end has been woven in, and both thumbs are done . . .). ok, well, maybe that reaction was slightly unwarranted—after all, it IS just knitting, not brain surgery. but when i glanced down, for the second or third time mind you, at my finished pair i saw this 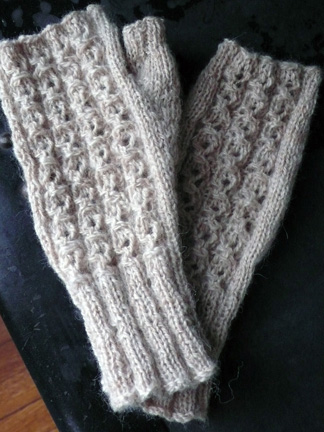 see anything odd there—just a little??
heh. i was so bummed. i mean, i had put them up as a prize, for heaven’s sake . . . jeez, the universe just HAS to laugh at me. it was not lost on the universe at all, even at 5:56 am, that i completely screwed up knitting the pattern WHICH I WROTE MYSELF.
i did NOT read the pattern. that is, i read the pattern, but i did not bother to do a stitch count when i reorganized the stitches after the ribbing. yeah, that. heh.

you can rest assured that the pattern itself is fine—witness the first mitt, which is correctly knitted. no, this was totally about me being a cocky dumbass.
(pardon my display of potty-mouth; i don’t like to swear on the blog, but that was one bonehead move).
i mean. i did not even notice it. not even a little.
and i sure as hell am NOT going to rip them out. i know, i know—i should rip them out. but i won’t. really, i just need to move on.

and then you know, we could look at this in a couple of ways. there are some people who would give anything to have these in their hall of shame, with the title “did you read your pattern??“.
of course there will be another “good” pair up for a prize. but should we keep these on the prize list too? i mean, this is certainly a prize-winning mistake . . .

and boy-oh-boy, speaking of prizes, if you haven’t seen it yet, you must go check out the blogiversary prize list and send me an email. course, you will have to compete with a LOT of other readers—YEE-GAW you all!

seriously, i had no idea; i probably announced the contest a little too early, but really—who knew?? the first time i ran a contest, maybe 12 people entered it. and then, for the lanterne rouge contest, i got about 30 or so entries. so i was pretty surprised yesterday and today to be clocking in, well, several hundred entries already. wow. i had no idea.

i had no idea that you all added up to a much bigger number than i have in my head most of the time (i don’t read stats—can’t make any sense of ’em). and i had no idea that word could get around so fast. i know the internet is powerful, but i always thought, based on previous responses, of knitspot as just a tiny speck on the radar. but things are a-changing—something has happened since august. and it feels really, really cool.

37 thoughts on “in which i actually DO ruin some knitting”