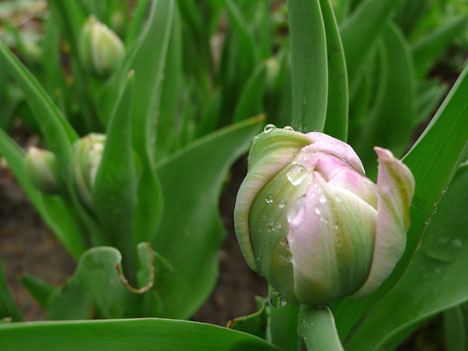 boy, oh boy, the weather has been nothing but miserable here this week—rain every day, except for the few hours when i absolutely cannot get outside. 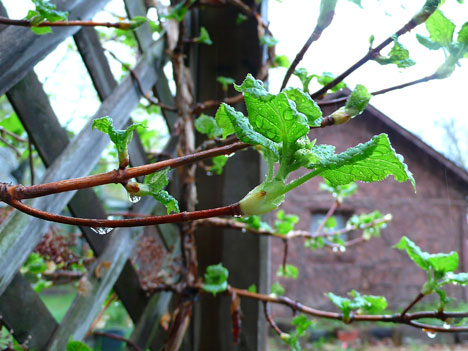 even if i could, everything is dripping wet; not the greatest conditions for planting onion sets or chard seeds. which is what i’d do if it would just dry out a little. haha, i had a look at the 10-day forecast, just see if the very weak sunlight trying to assert itself now would turn into any sort of trend. and i discovered that we are due for more heavy rain and thunderstorms every day EXCEPT the three days at the end of this week when i’ll be at spring fling. wouldn’t you know . . . 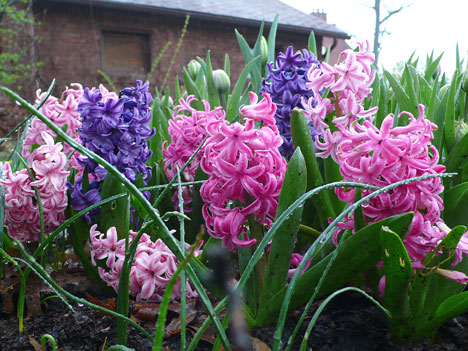 it’s still pretty though—the grass and flowers have taken on the most intense coloring from so must thirst-quenching rain. and it is warm—mostly in the high 60s and 70s; we can’t complain about that after the winter we had. 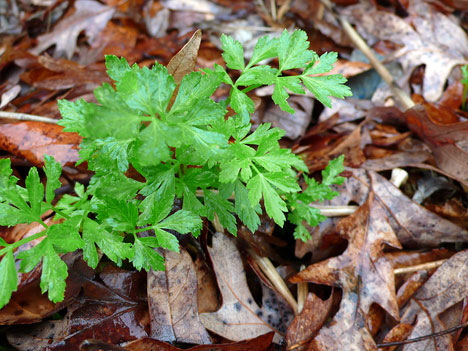 new growth is emerging everywhere i look—a row of parsley has come back along the edge of the asparagus bed (thanks jody m!). and our favorite, the may apple, has begun to poke its head out above ground, though not nearly as early or quickly as last year, when april was very warm and sunny. 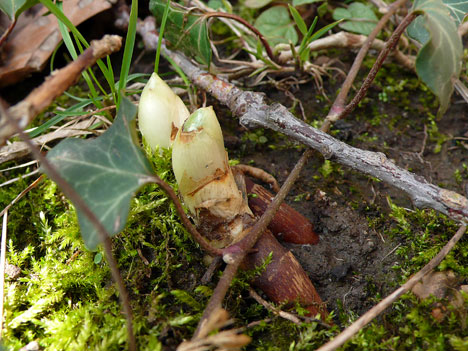 soon, though, very soon . . .
everything is a little later this year than in the last couple of years; it stayed cold into april, much longer than we’ve gotten used to. 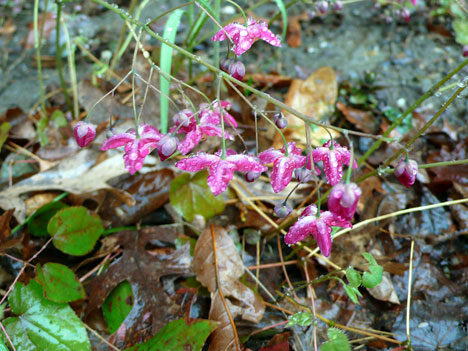 i do think we are headed toward warmer days now. maybe may will be brilliant for a change, to compensate. and, whether or not it rains, ’tis still the season for flowers . . . 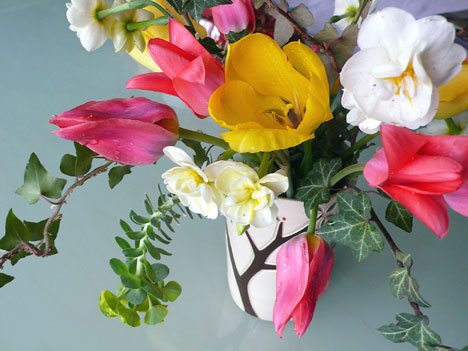 it’s just as well it wasn’t nice this weekend, though—i had some indoor jobs i’d been putting off that really, REALLY needed to be done. namely, cleaning out my closet and sorting out my yarn stash.

i took care of the closet thing on friday night, got rid of a bunch of old clothes, and took stock of what needs replacing (i am much too big a fan of old, soft t-shirts and sweats; some is good, too many is not).

i took a day off from the organizing on saturday to block the crooked little scarf and cook for the coming week. that was really nice; it’s been absolutely ages since i spent the day puttering in the kitchen and i sorely missed it. i made an excellent vegetable curry for supper, which we ate with relish (and we’ll eat leftovers tonight, yay). 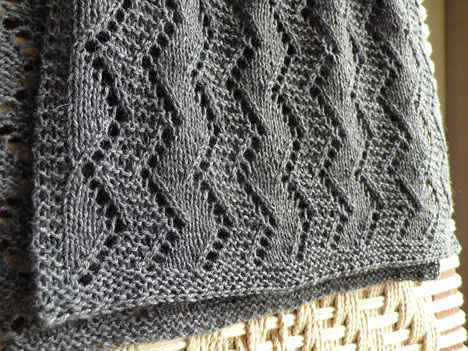 the scarf blocked out beautifully, too—knit up in great northern yarns yak/mink/merino/soy blend in charcoal gray, the yarn bloomed and relaxed into a soft, dense, but lightweight fabric that will be lovely to wear three seasons of the year. i’m actually planning to have david model it for the photo shoot to show off its versatility.

i knit the longer, wider version, but the pattern includes a regular size as well.

i also cast on for a couple of new lace scarf projects—this one is a somewhat-reversible pattern of soft, interlocking ovals that create a relaxed rib; i wanted a slightly-but-not-too fuzzy yarn to accentuate the zaftig curvature of the pattern and at the same time, hold its own in terms of stitch definition. i rooted through the stash and came up with several options, but this sweet georgia cashsilk lace in the gorgeous riptide colorway came out the winner of the swatch wars (there are no losers, only next times . . .).

you’ll be seeing much more of this project over the next couple of weeks—it’s the perfect size for traveling, and i’ll soon be on the road again. 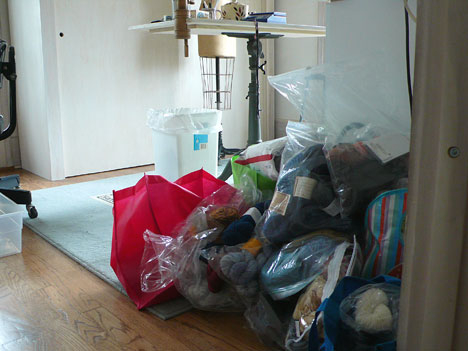 speaking of the stash, my day of reckoning with my yarn room was long overdue and since the weather outside was frightful, it seemed a good time to bite the bullet and make some headway. not only had i been dropping new arrivals in a pile just inside the door, but the trunk show needed shake and refolding before being put away. 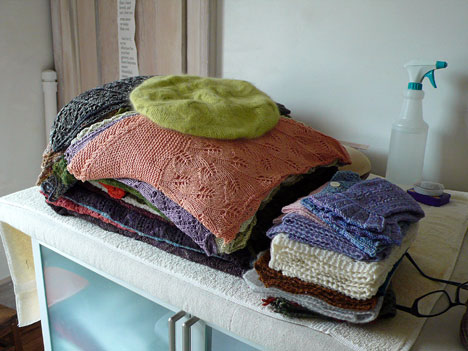 because i have to pack a wealth of tools, books, and materials into my work spaces, these kinds of piles really get to me in practically no time; they make me feel hemmed in, like a bull in a china shop.

and while it would be easier of all it amounted to was putting the yarn away in these bins, that was not the case this weekend—i need to make space by doing a serious sorting and culling of what was housed in my yarn closet—the equivalent of pulling out all the furniture and rolling up the rugs for a good spring cleaning. 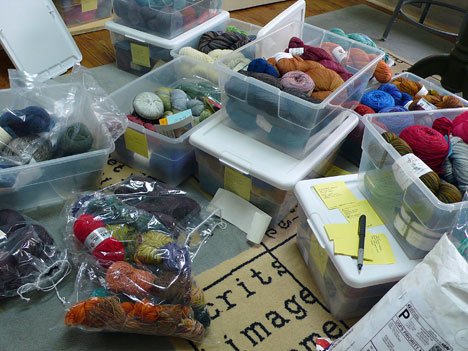 it’s always worse at the start, before i have a sense of what the new organization should be. basically, some of my work stash is sorted by yarn weight or type and some by dyer, depending on how much i have from any one source.

i took out everything that was discontinued or truly not something i would knit with. i also put aside skeins that i love, that will be knit by someone else into samples for the trunk show (this is a great use of extra yarn for me, but it doe eventually come back in another form, haha). 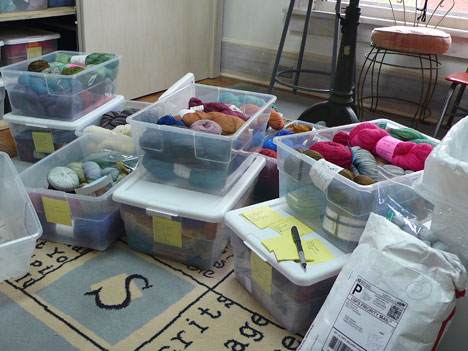 slowly at first, and then faster, the skeins get sorted and re-stored; each bin gets labeled with a yarn type and the dyers included. but that’s not the end of it—they all still have to have a spot on the shelf when it’s over. i had four new boxes filled and not enough space 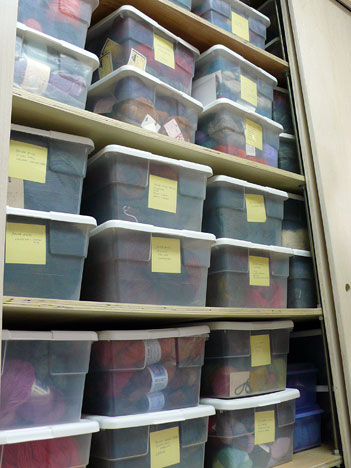 ok, make that NO space.
i got to work in another part of the closet, emptying a few bins of older novelty yarns (beautiful ones, i swear, or they wouldn’t still BE here). my mom and her friends have been knitting scarves with these yarns recently and i think they’ll get a lot more use out of them than i will. 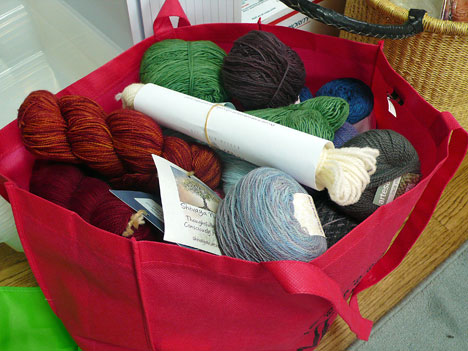 in the end, i had three big bags of good-quality yarn that need to go elsewhere. some of it is for test knitters, some for my mom and her friends, and i’m considering a possible destash sale to benefit a good cause . . . we’ll see. i’m not sure i’ll have time for that . . .

the whole process took ALL DAY yesterday—no joke. i started this project around 10 am-ish and did not walk downstairs til 6 pm. i was floored when i saw the time; no wonder i was hungry!

i made a nice dinner of flounder and veg from our freezer stash, using some fresh scallions form the garden that wintered over. 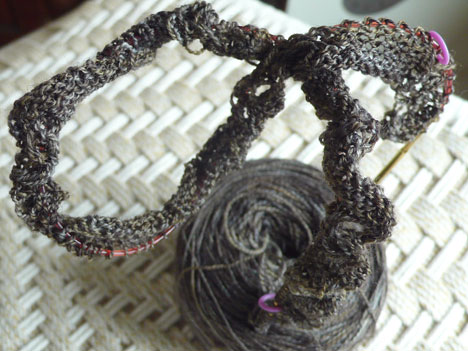 after that, i rewarded myself by starting the second new project of the weekend, a lace stole that i am totally and undyingly in love with (sorry david).

are you ready for this?? 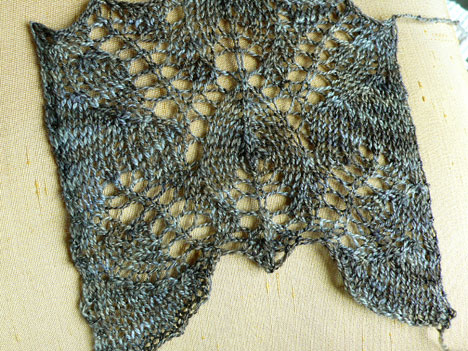 the yarn is glint of goldfish lace from alisha goes around, in colorway octavian. alisha gave me this skein at TNNA in january and i have been dreaming on it ever since—it is SO me. 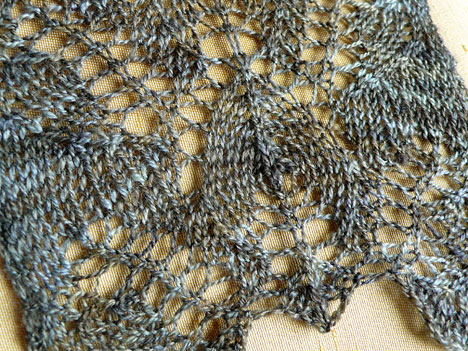 the stitch pattern is incredibly large for most yarns, but is perfectly proportioned for this fine laceweight. and the spidery interpretation of the dramatic line work within, when worked in the merino/silk blend just takes my breath away. 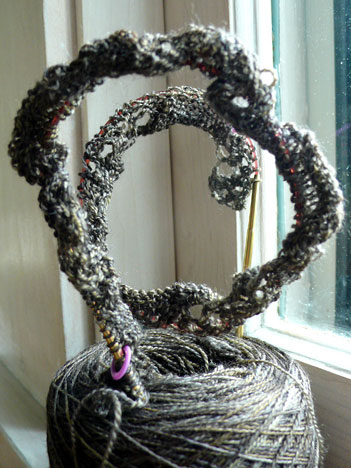 i’ll work each half toward the center and then graft for a beautiful center motif; i can’t wait to see more, can you??