i can’t believe it’s 10 pm already.
i was trying to get through a round of edits on a book, but promised myself i would stop at 6 even if i wasn’t done. and instead, i just kept saying “one more lesson, and then i’ll quit”.
i love my attitude when it comes to knitting, but really, what does one get from applying it to “real” work? more work, right?
ay-yi-yi.

which reminds of this hat i made last week. it was the night before the night before i left for SPA. i had this hat on my mind that i wanted to make. i didn’t get upstairs to knit til well after midnight. but i very much wanted to start this hat, so while david found a cool movie to watch (seriously, you gotta check out this film), i cast on for my hat.

i wanted a shoulder-length stocking cap. i had already made this cap from a dark-red handspun yarn. you can’t really tell, but it has a couple of dreds hanging down with beads on the end. 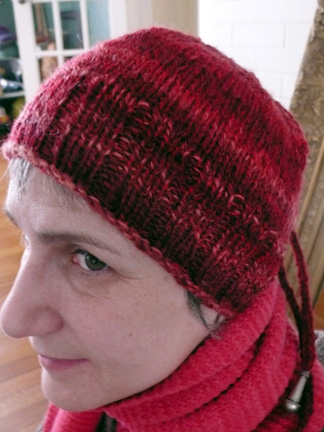 (when i look at this picture i have to giggle; it reminds me of this boyfriend i had a long time ago who used to draw cartoons in which i was some sort of superhero whose nose took up about half the page. the angle of this picture reminds me of those cartoons—not that i have issues with my nose; i don’t. the cartoons were just so hilarious; i distinctly remember that in some of them i was flying with knitting needles in hand. and not just my nose, but my pointy toes were frequently featured as well. sigh—what was i doing with him?)

anyway, there wasn’t enough of that yarn to make the stocking cap, so i decided to use another red handspun, which is just a tad brighter.

really all the knitting went fine. i just kept falling asleep over it. finally at around 4am, i had a hat. and do you know what i did then? i proceeded to take a whole week more to get the tassle on and weave in the ends. i took it to SPA but didn’t even touch it there. i finally finished it yesterday morning while i drank my coffee. 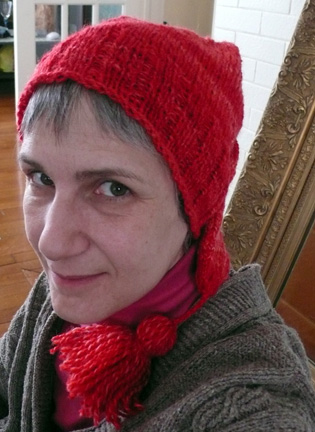 i like this hat, but debbie says i shouldn’t wear it. i may give it away. or i might just wear it for snow shoveling and fresh-air breaks—i take those during the day, no matter how freezing or hot it is—i like to go outside for a few minutes to breathe deeply and clear my head (and what debbie doesn’t know won’t hurt her, right?).
i have a couple of other hat ideas i want to try, like the fez-beret (i’m not sure if i’ll like the shape on me, but i LOVE the name . . . so therefore i must make it).

so back to staying up late working—from where do we get such bizarre behavior? can it be unlearned? i can see that it’s worth it for something i love, like spinning or knitting. but for work?? i mean, we’re not searching for organ donors, or working the 911 line here.

what’s up with feeling like i need to finish some huge goal before i can stop for the day? why can’t the goal be finishing eight hours? and especially, what’s up with putting aside the important pattern work to voluntarily do more of the daily grind? i know you won’t stand for that for very long, so i’m telling you that i’m working on it. i don’t think i’m succeeding, but i’m working on it.

while i thought about all that stuff, i started knitting with that luscious pink and gray sock yarn i spun a couple of weeks ago 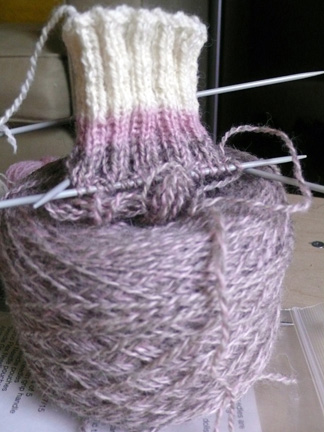 i decided to do a straight-up ragg wool sock, to play up the offbeat colorway best. i thought about doing something fancier, but i’ll save that for another two-tone alpaca/wool that i spun over the summer.

i’ve been working away on the starlight wrap, too, and am hoping to at least begin writing the pattern this weekend (that would be heavenly—it feels like ages since i tortured myself over charting and numbers calculations).

and now it’s another hour later, so i’m skedaddling. 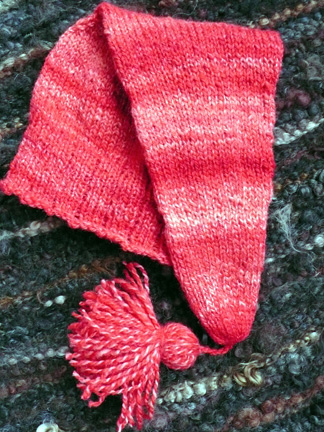