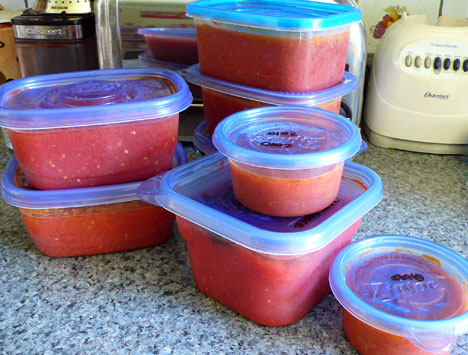 to make room for the new.

it’s a been a busy, busy weekend here across several categories of activity, but the first thing on my list friday morning was to get some cooking underway.

we both had a craving for pizza this week and i figured that making a batch of several was as good an excuse as any to use up the last of the 2010 tomatoes from the freezer. and we’ve had some pretty warm afternoons lately, so i wanted to get in the kitchen early.

sauce takes hardly any time to get going, but it does need an hour or so on the stove to cook, so i put that together first.

after which, i took out some baking ingredients to bring to room temperature while i cooked a couple other things. 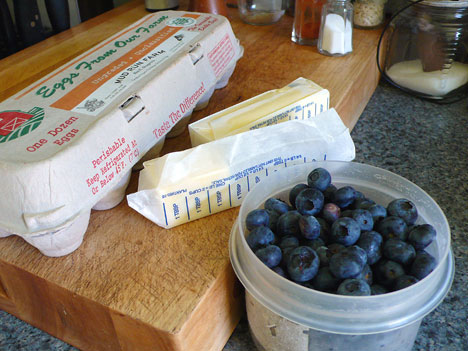 david went to a local farm for blueberries earlier this week and i wanted to make blueberry buckle very badly with some of them. mmm, one of my summer favorites and so easy.

so while those ingredients softened, i got some beets, onions, and garlic started for roasting in the oven

these came out delicious, BTW; but you know, i LOVE beets. it’s david that will have to be coaxed to eat them. he says he’ll do it because it’s good for him. meanwhile, i’m snacking on them so often, there might not be any left for him, haha. they are excellent cold . . . 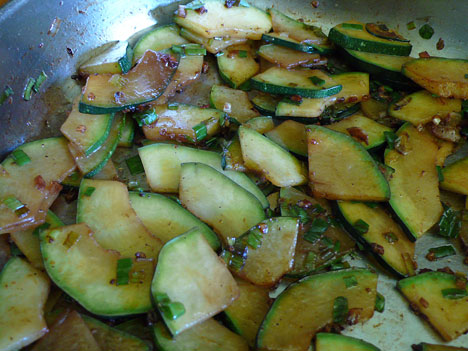 barb brought me a VERY large summer squash the other night, and this i cut up into pieces and cooked several different ways. plain sautéed squash to add to pasta or a summer soup and then i stir-fired some of it with sesame oil, ginger, garlic, scallions, and some black pepper sauce. another good snacking dish, i’ve discovered, heh.

once i had those out of the way i mixed up the cake and got that into the oven, right on the heels of the beets. 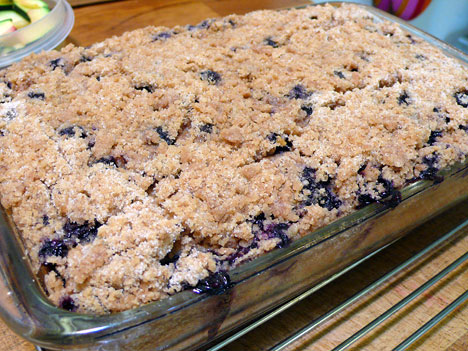 by noon, i had a nice cake and several side dishes prepared, plus a head start on dinner. what’s not to love about the kitchen?

oh—plus, i soaked all my sweater swatches so that once the cake was in the oven, i could rinse and lay them out to dry.

by the way, i love nathalie’s suggestion to call this sweater blümchen, which means little flower—it’s related to sprössling, but different. thanks nathalie!

i also liked dawn’s suggestion of zaailing, the dutch word for seedling, so i’m keeping that in mind, too; who knows, maybe this will turn into a series. 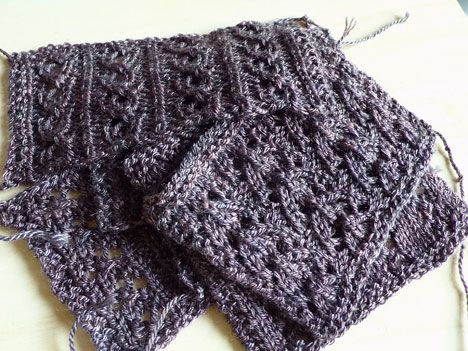 i have six swatches in all; one of them is a stockinette swatch that i’m using as a baseline, so that doesn’t really count, except to assess it for integrity 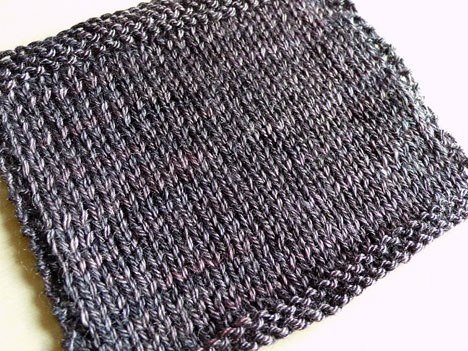 sea pearl is a wool/tencel blend which is a bit slinky, in that way that can make stitches separate and wiggle unevenly on the needles. it’s very different in nature than the merino yarn i used for the original sprössling. once washed though, it blooms just enough to make those stitches snuggle right up against each other in nice, even rows and columns, without losing its lovely sheen or drape.

this yarn also does not have much elasticity, so i’m looking for a fabric that provides some in its structure. this is the beauty of ribbing—or any motif that has a formal mix of knits and purls arranged in columns.

let’s take a sec to talk about what exactly i’m looking for in this process. i want a stitch pattern that has a similarly strong vertical orientation because i think that’s one of the elements which makes sprössling look so well on many different body types. i’d also like the fabric to be softly ribbed as in the original; this results in a fit that is universally forgiving and holds its shape well. but i do want a pattern that is visually different enough to justify a whole new design and which also works with the yarn (and of course, is fun and interesting to knit). and lastly, i want the sizing of this version to fit the in-between measurements—32, 36, 40 instead of 30, 34, 38—so i need a pattern that knits to a slightly different gauge or has a different stitch count.

that’s quite a list and why i swatched for a week. anyway by thursday night, i’d narrowed my million or so choices down to five possibilities and by this morning, they were dry—let’s take a look. 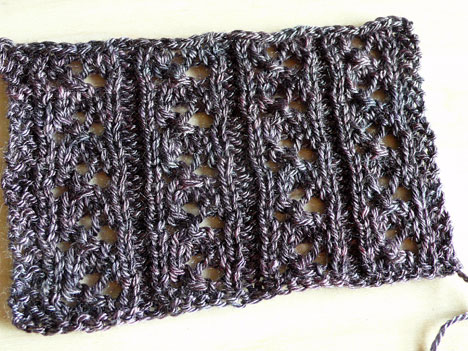 swatch A is the cloverleaf rib, a 7-stitch pattern that looks very, very similar to the original sprössling motif—maybe too similar. while it’s appealing for the ease with which i can work it into the existing sweater pattern, what’s the fun in that? however, i’ve been picturing this new sprössling for a while now in some form of this motif, so i didn’t give up. 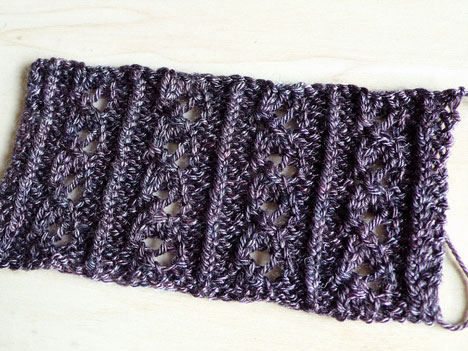 swatch B is a variation on the cloverleaf rib with more negative space and a nice, crisp stitch definition in the foreground elements. i like this one an awful lot. though the stitch pattern is a different width than the original, it also knits to a different gauge, which serves the purpose of achieving the in-between sizing i’m after. 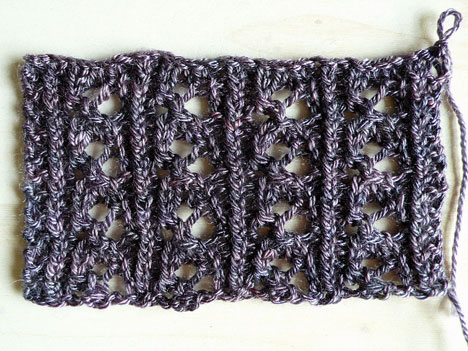 swatch C is the same motif with one purl stitch taken out on each side of the knit rib, so as to make it narrower (in case i needed a version that was smaller). this is also very nice, but lacks some of the dramatic effect that swatch B has. 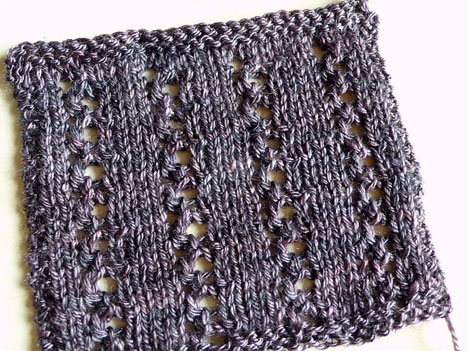 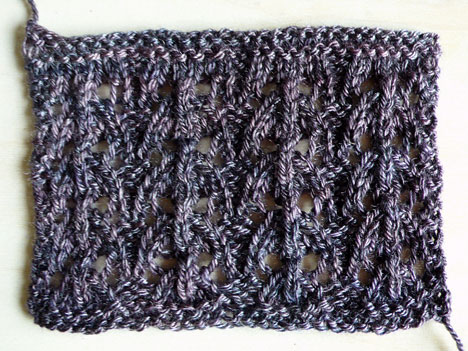 and then there is swatch E, which many of you have already shown an interest in. now, i like this too and at first, it was my forerunner; i thought it would neaten up once it was washed, but was surprised to find that it didn’t. though i do like the pattern, the stitch definition just isn’t what i’d hoped it would be and i’m not sure it will hold its shape in this yarn. you can see what i mean in the desk shot below . . .

so for me, it comes down to these three variations on the cloverleaf rib.

my next step was to lay them out on my desk for the day to fret over all of them some more. i measured each one carefully and calculated. i looked at them several times during the day in varying light. 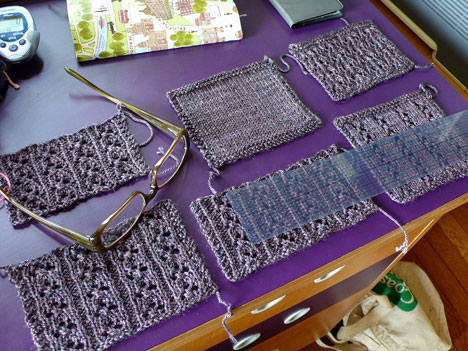 even though i’ve narrowed it down, none of them is out of the running until i’ve run all the calculations—and sometimes, looking at them differently makes one grow on me that i didn’t appreciate enough at first.

at this point though, for me there is a clear winner—can you guess which one? actually, i’ve even cobbled together my draft pattern and am ready to cast on, but before i tell you, i’d love to know what you think. these once-in-a-while input sessions are extremely informative; even more so when you’re not swayed by knowing my results.

and for your trouble, i’ll treat you to pizza. after a rigorous bike ride last evening, we showered and hit the kitchen to put our pizzas together 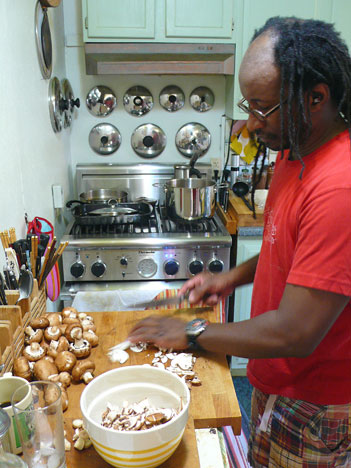 david prepped the sliced mushrooms, olives, and mozzarella, while i prepped the dough and put the pizzas together. 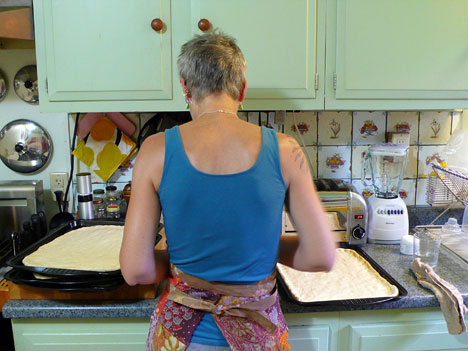 (he’s getting me back, i think for blogging his picture so often) 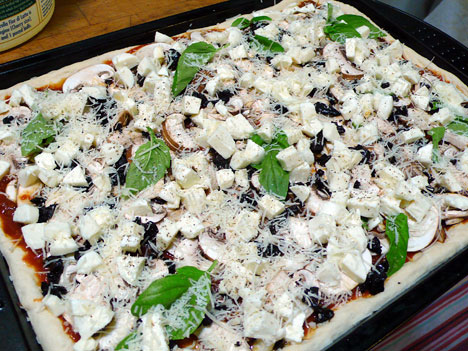 i love the way they look before they go in—white, black, and green is one of my all-time favorite color combinations. 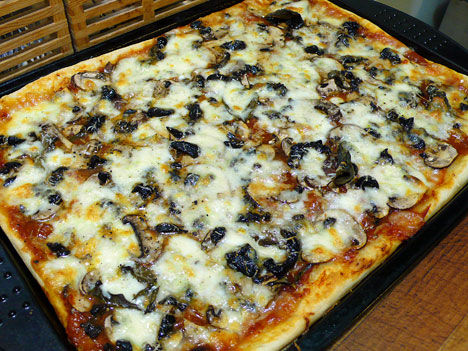 mmm, after about an hour, we had dinner ready. yum yum.
and you know what? it was SO good that we totally forgot about the cake and never even ate any.

but i’m pretty sure that tonight we’ll make up for that, haha.
time to go watch the bike races now—flexing my knuckles for my first tour de fleece session.