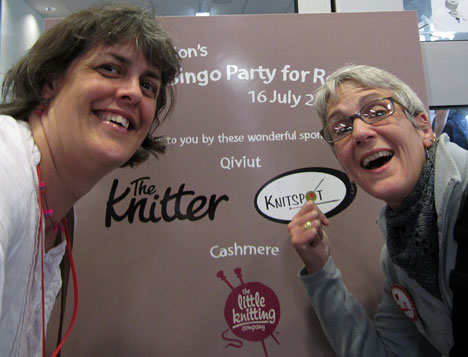 sigh . . i love knit nation. i’m so sad it’s over; it was, once again, a really REALLY fun event, attended by sweet and enthusiastic knitters from all over the globe.

that’s me with our friend helen, who many of you know as josiekitten. we are waiting for the doors to open on charity bingo, the saturday evening event to benefit refuge, which knitspot sponsored. 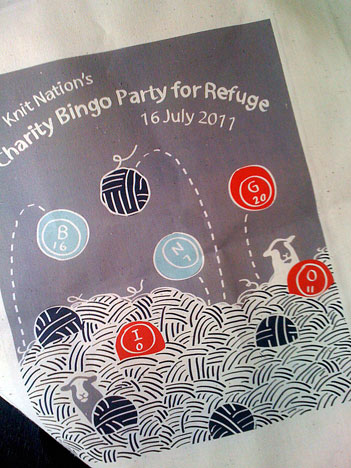 it was an uproariously fun evening and a brilliant success. not only did we raise a bunch of money for this good cause, but it turned out to be an opportunity for an impromptu meeting of the UK branch of our fall in full color club—also in attendance were janet, gina, rose, with cameo appearances by hattie, sandy, and of course socktopus and cookie. 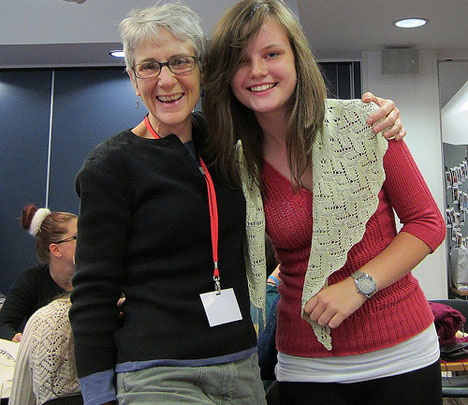 in addition to sponsoring the event, we also donated two prizes, including my sample knit of the budding apple shawlette in kollage creamy, which was won by lily (i feel awful that i don’t know her ravelry name, but i hope she keeps in touch as she is a wonderful designer herself).

the other prize was a full membership to our fall club, but unfortunately i never did get to meet or take a photo of the recipient.

not that a lot didn’t happen before saturday, of course. there was all day friday, full of sweater fitness class and the preview opening of the yarn market 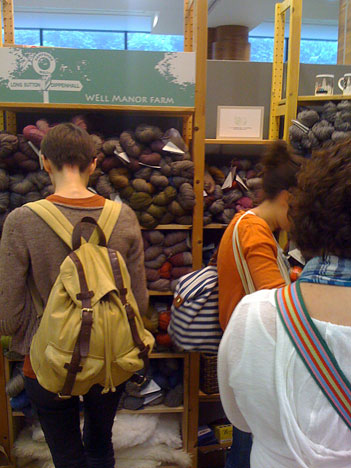 where loads and loads of beautiful british wools abounded. i was sorely tempted, but caught myself in the nick of time—i was already traveling very close to the limit of my luggage weight (i’m not sure how that happened), so i’m being very careful—i wanted to be sure to have room for belgian chocolate . . .

but still, i’m kicking myself; i wish i had purchased some shetland yarn form well manor farm and anything from john arbon. 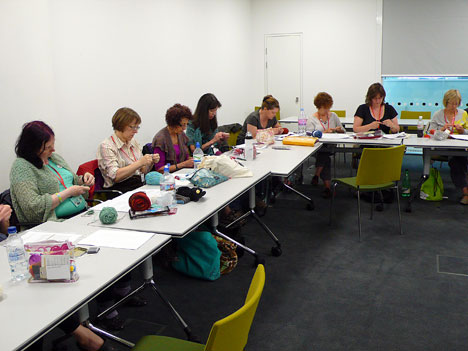 so yes, my teaching weekend was filled with several intense, all-day classes that i think were really great. at least, it seemed so from my side of the desk and i hope all the participants felt the same. we had an absolutely wonderful finishing class on saturday and advanced lace on sunday. 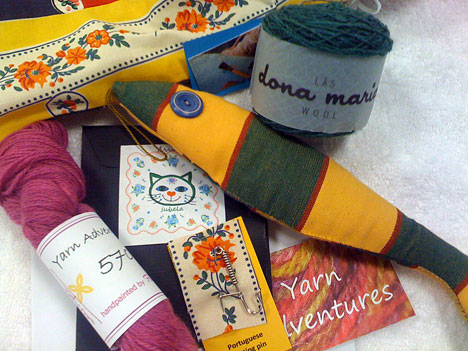 which included a lovely sampling of handmade items—yarns, a sardine-shaped lavender sachet (my favorite, hee-hee!), a portuguese knitting pin, and a hand embroidered knit pin tucked into the kitten envelope; everything presented in a pretty hand sewn bag. such a lovely gift—thank you ladies! 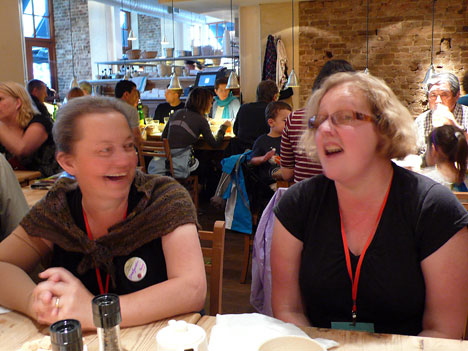 sunday provided another chance to get together with the norfolk knitters for a cozy lunch in between their classes with franklin habit and cookie. 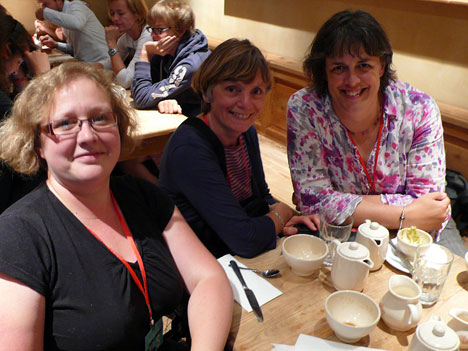 we did an awful lot of laughing in between delicious bites of LPQ soups and sandwiches, mmm. and we managed to dry out a bit from the drenching we received while running between raindrops to get there.

the weather this last week has been chilly and drizzly wherever i go—where london was quite warm last year for the event, apparently that was very unusual. this year is more the norm. 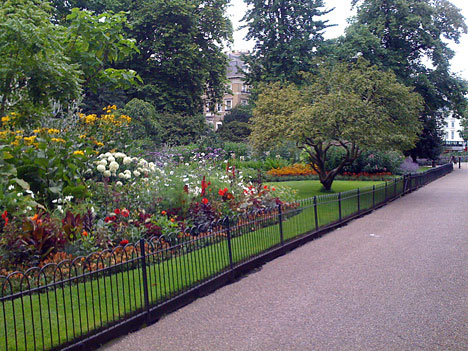 that said, i have still managed to get out daily for a nice walk or run—i have not sloughed off in the least (i do miss my bike very much, though . . . and even more, i miss my evening rides with david). 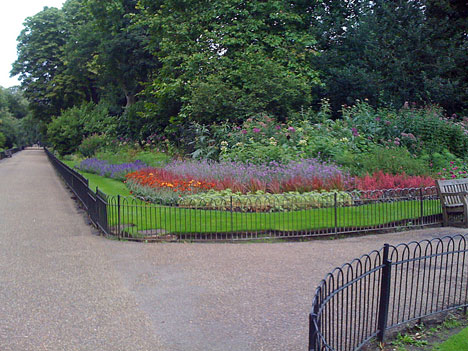 these photos were taken during a pause along the flower walk in kensington gardens, which was very close to the knit nation venue at imperial college. i went out every morning at the crack of dawn, which seemed to be the secret to hitting the best weather of each day—i managed to stay dry on all five days i went out; there was one morning that i didn’t go because of the rain.

i also went out along the thames path from alice’s flat yesterday morning and crossed over into the battersea park. i didn’t take photos, but you can see some of that walk from my february post about the same route.

so yeah, the running program is going well—yay. no more evidence of the ankle/lower leg issues i had in may, phew. i’m almost up to running a continuous 30 minutes—i can run 40 minuttes, but not all at once; i still need a couple of walk breaks in there. but i love it and that’s the best part of all.

now i bet you’re wondering where all the knitting is, right?
well, i have made excellent progress on a couple of larger secret projects but i can’t show you those. however, i can show you my blümchen cardigan front in briar rose sea pearl 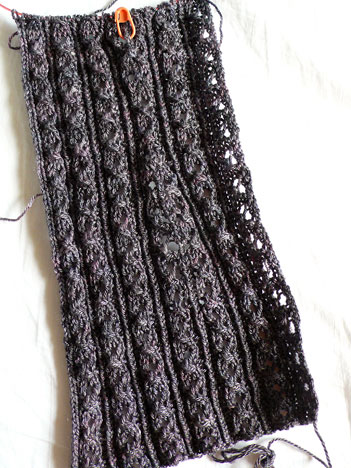 which is almost to the underarm already, woo-hoo. this is such a pleasure to knit; i’m still saving it for a treat between reaching other knitting goals, but it’s coming along, which tell you that the system is working for me. 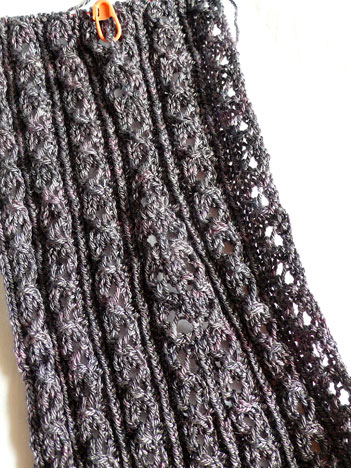 which on this piece, will converge onto one of the single knit tbl ribs. it’s working out really well—the way that the pattern diminishes and then expands again looks very good in this position. yay.

so even the knitting is good. while i haven’t had much of a chance to work on patterns during this trip yet, i’m hoping to squeeze in some of that between now and sock summit. even a little bit would be good. i have the rene sweater pattern back from proofreading now and the whitfield shorty is ready to go as well; i just need some spare time to devote to them. 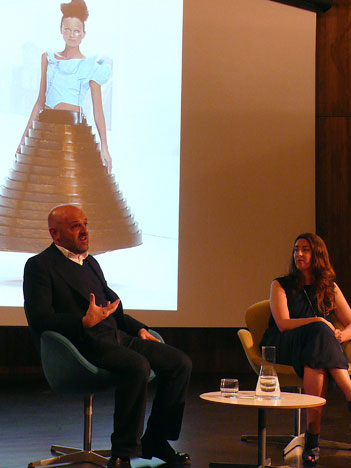 cookie and i had a rare opportunity to see one of our design heroes last night—hussein chalayan gave a talk/interview at the V&A in london and we managed to snag tickets to see it—we even got to sit in the front row. she actually changed her flight back to the states so we could attend and then continue on to belgium (where we are now) to see a knitwear exhibit in antwerp.

the talk was terrific and though we didn’t ask any questions, cookie bought a book and had it signed 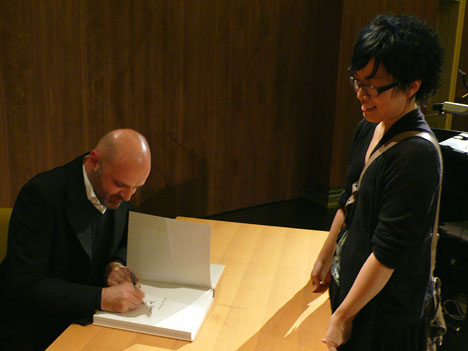 so now here we are in brussels; we got in around noon today and explored the city center this afternoon with alice and carol. tomorrow is a national holiday with all sorts of citywide festivities, including a parade that passes right by our hotel at 3 pm—we’ll get to see the king!

i have lots of pictures to share from the chocolate museum and the brewers museum, as well as from our long walk. but i’ll have to prepare those for another day—it’s very late now and we are past tired.

on friday we travel the short distance to antwerp to visit a fashion exhibit and shop around a bit—more from that stop and the rest of this one in a few days. til then, have fun and be good! 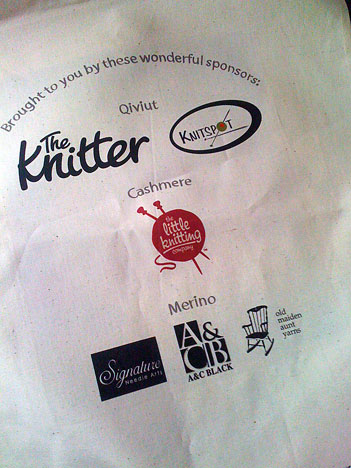 i’m trying to convince david to take some pictures of the garden in my absence and do a little post or two so we can all keep up together—hopefully, we can talk him into it.