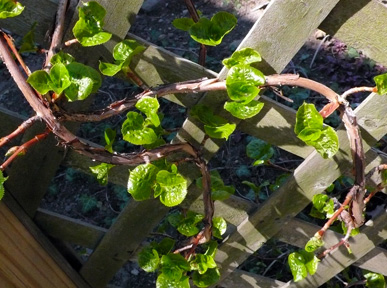 and though my hope is that we keep the health of the planet in mind every day, in all our actions, at least on this one day we would each do well to make plans to tread more lightly on our planet in the coming year.

the grand system that is earth is becoming ever more fragile under our care. it is our house and we are letting it—no causing it—to deteriorate. and, as they say, they are not making any more of it . . .

i am not by nature a doomsayer—i have plenty of optimism for the future (ok, that might make me a fool, and might make you turn me off now).
but neither do i think that there is a lot of time to waste.
it is likely that we can each think of a few small, healthy changes that probably won’t make much of a dent in our time, budgets, or desires. the most important areas to look at will be our usage of fuel, water, plastics, and household chemicals. you’ll know where you can pare down—just think about it, and do whatever you can. 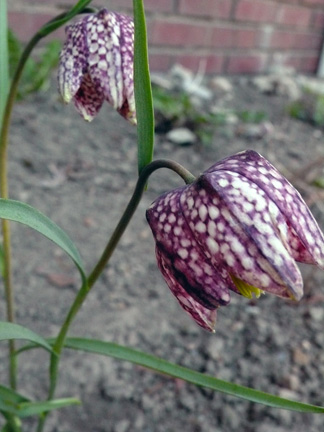 i must tell you now that i need to work on a few “secret projects” in the coming weeks, but all will be revealed later . . . so if it seems as if i have little to show, be assured there is more going on in the background. i’ll try to keep it entertaining with a bevy of other diversions—probably some more small projects.

i have been working on swatches for several projects this weekend, trying to get the visions in my head realized with stitches that i’ve fallen in love with from my books—stitches i’ve had earmarked for something some day, and have finally found a nice for (or so i think . . .). 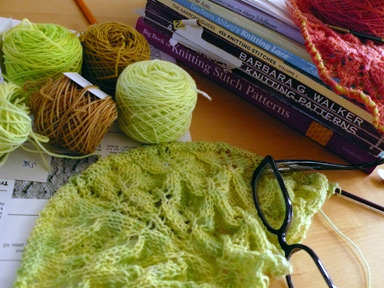 bzzzz—bee shawl. i shouldn’t jinx anything by saying this, but so far, so good. i had a little portfolio of stitches picked for this one since last summer and i think we are going to end up with something pretty. in the process of testing the stitches together, i’m trying out all the colors anne sent me. i can see i am going to have a tough time deciding; these are all wonderful interpretaions of my idea.

so far, S2a is looking good. it’s fresh, it’s yellow, but it’s green—and just look at the way it catches the light and then throws it back threefold. it is the essence of summer. later on, i’ll try S1a, and see what happens. i am also going to test that goldy-tan color; i have a feeling about that too.

i still have some work to do to pick an edging or two, but like i say, so far, so good on the stitches. hopefully, later this week we will be off to the races. (bee races—ha!)

once i decide on a color, i’ll need to wait a little bit for the yarn to come, so i’m going to start another project with some beautiful merino laceweight from deb at fearless fibers. 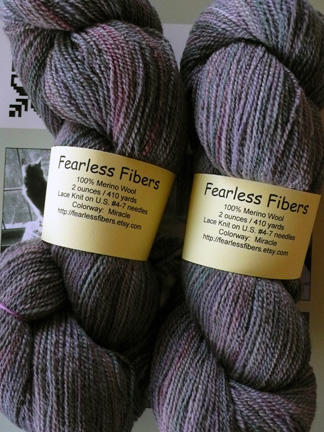 now, deb knows full-well that if she dangles a gorgeous gray colorway in front of me, i’m gonna go crazy. i’m using some of this same yarn for another project and omigosh—this stuff is incredibly soft; delicate, but still has something to grab onto when i knit with it. and did i mention it is soft?? 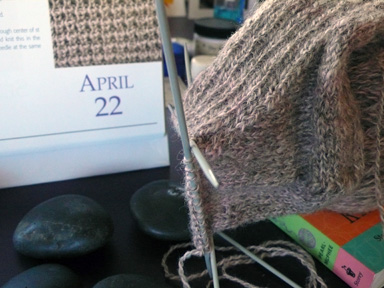 pink raggs are finally behaving and i am about halfway to the toe. if i can manage to finisht it correctly, this sock should be done real soon.

tree scum is all fixed up as well and right back where we left it last time we saw it, SO—(and i know this is a stupid faux pas) i did not take a new picture. i know—i’m a glutton for punishment. not only that, but i’ve totally turned my back on all those promises i made a few weeks ago to scummy. i’ll bring that one to class tomorrow and hopefully finish it off. i’ll show you then. sigh. and then i need to start sock number two of that pair.

and now, i have the new sock to show you, the one that i’m using my woolen rabbit yarn for. and can i just say? this is IT. this yarn knits up so beautifully and is so nice to work with—just look 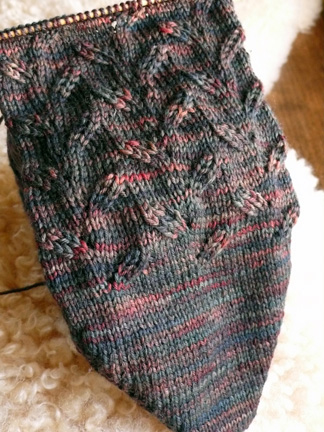 this is the next manLace piece. you might not be able to see it clearly here, because i did not have a model available this morning (he needs his beauty sleep on weekends . . .), but this actually is a lace stitch. a small one—we don’t want to scare them . . . it’s closing up a bit here in the photo, but i promise we’ll get to see it on a leg soon. this is sort of a dress sock—thinner, smooth, and with a little air-conditioning, but not underfoot. man-approved.

and lastly, have you seen this? 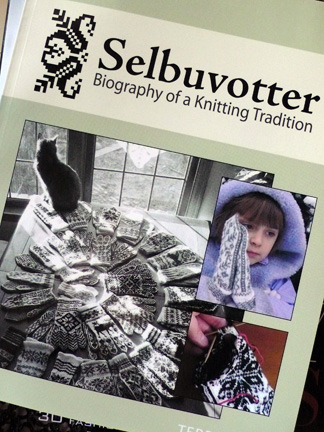 it’s a wonderful book by teri shea all about Selbuvotter—norwegian mittens. it’s got history, tradition, technique, and patterns. i pre-ordered mine in march, as an addition to my library of world knitting traditions. i have several books on norwegian mittens; a few of them in norwegian, which i can’t read, but knitting is pretty universal . . . anyway, if you buy one through the website, it will be autographed.