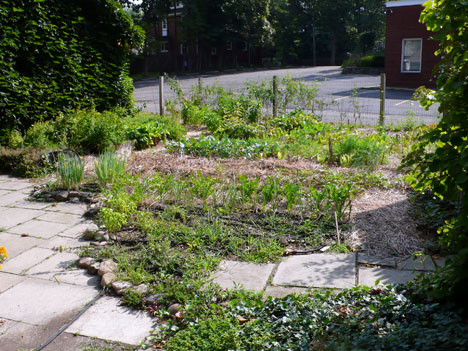 i know i haven’t talked much about the garden lately . . . not because i don’t love it every bit as much as i did in june, but because it’s got me stumped at the moment.

you see, it’s a bit stalled.
the mid-summer heat is always hard on the garden and this year, it seems to have taken a particularly large toll; it’s just not rallying with the advent of cooler weather, as i expected. it would be overly romantic to say that it missed me while i was gone, but it’s hard not to wonder if losing mother for a whole month was just too much stress on it. 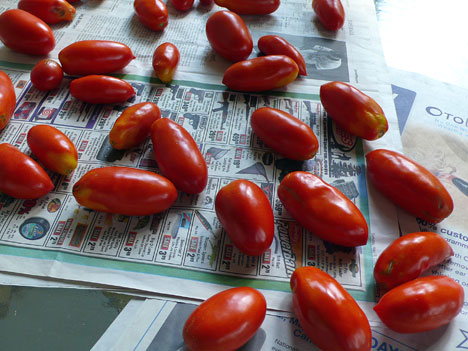 not that anything is dying or even sick; just not growing well or producing as heavily as usual. the tomatoes for instance, normally put out more than i can even keep up with during august. not only have we not gotten that tide that makes for good preserving, but the plants don’t seem to have many flowers or little green tomatoes coming along to indicate some hope for the future.

this batch of plum tomatoes will be enough to make some sauce for dinner and maybe one future freezer meal, but nothing to write home about.

and my greens, which were wonderfully lush and full of promise in early july, are nothing short of abysmal looking right now, having been under attack from both too much heat and too many flea-like creatures 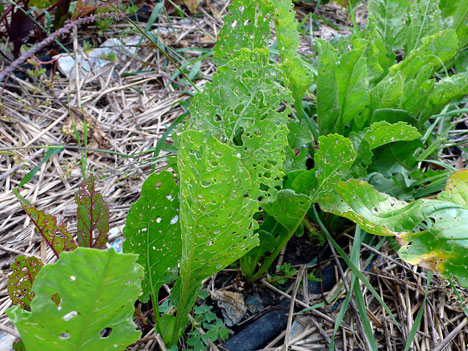 bugs are something we haven’t seen before in our tender greens, so i find this discouraging, although it might be that they need to be near another type of plant next time. i’m thinking of asking david to weed whack them down so they can start over. the cooler nights we’re having now just might agree with them enough that we can salvage the lot.

i’m particularly disappointed about the greens because they are my absolute favorite thing we grow and i was SO looking forward to eating loads of them when i got home. so far, we’ve been able to squeeze out one meal, but none since then. fortunately, david put up a few bags in the freezer while i was gone.

and who knows, i may even start new; i have some space where the green bean plants can be torn out . . . i could reseed some chard in there and hope for a fall harvest. they’re capable of producing until a hard frost hits; whether they WILL is another story. 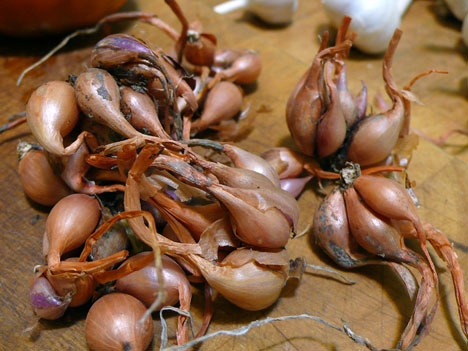 my shallots, which started out well enough (better than that, even), died back earlier than expected while i was away, so david dug them up and discovered them to be somewhat underdeveloped. they’ll be ok to use, but i was hoping for bigger . . . and more. i planted at least two dozen bulbs but we harvested only about six heads.

i might try planting them in the fall this year, when i put in the garlic. 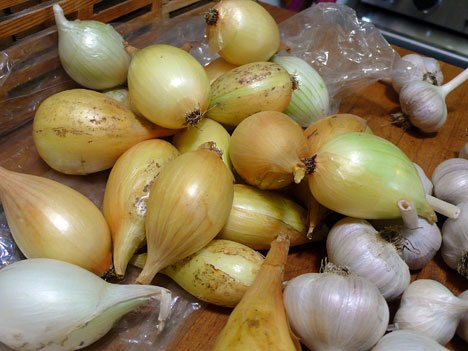 it’s a similar story with the onions; i must have planted five dozen sets in several varieties. and we got some lovely onions, though very few of them and rather small (that’s the total take in that photo). i’m going to have to do some research to see if i can improve their life next year. i did plant them pretty late; maybe that’s it . . .

although the leeks went in exactly at the same time as last year and they are also lagging (though still growing, so i have some hope for them). 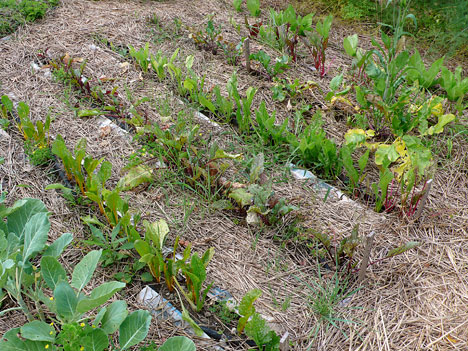 speaking of garlic, we did a little better with this crop, which also matured while i was away. david dug up all the onions, garlic, and shallots and laid them out to dry on the porch. just the other day, he clipped the dried tops off and peeled away the dirty outer shells so they could be used and stored. 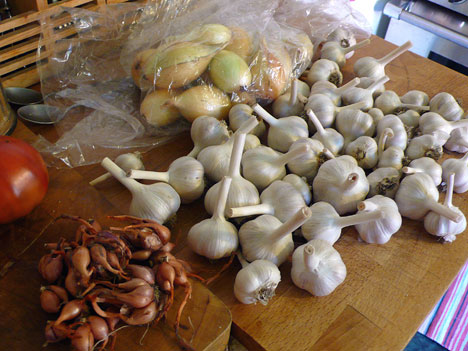 they look great and they taste good, too. again, a little smaller than i’d hoped for but at least we got out all that we put into them.

and on the other hand, i shouldn’t complain at all—some things are doing really well. it’s been an outstanding year all over our area for green beans—beckie, kris, and i are all still picking beans from plants that continue to flower long past their usual demise.

and our root vegetables are growing to beat the band. i pulled a couple of rutabaga the other day to try those out, mashed for a side dish with celery, onion, garlic and parsley, and WOW, were they good (sorry, i forgot to take pictures). i also have really large turnips that i still don’t know how i’ll use.

the second sowing of carrots which i was not able to monitor due to travel, ended up growing in great and i see there are some very large carrots as a result. celeriac is doing well, too, though the celery and parsley is not up to its usual standard. is it possible that only the above-ground plants are affected by the malaise?

but then there are the peppers, which continue to be the star of the garden for probably the eighth year running—we cannot NOT grow them, haha. this year i have beautiful, big bell peppers and nice, thick-fleshed yummy peppers (a sort of dwarf sweet frying pepper, very good), along with hot pepper plants that are simply loaded with fruit. way more than i know what to do with.

for now, i’m throwing my hands up and not probing too much—whatever it is, it is; i actually don’t have the time resources right now to fix this year’s garden, especially if it’s for naught. i am curious now about companion planting and how to put plants together so that they have greater resistance to damage from insects and disease. so i’ll start doing some research in the hope that there might be something there we can use in the future.

one thing that’s making me do a happy dance this week—you know how i thought my potato plants had died from disease?

encouraged by several readers who wrote to tell me it was normal for them to die back when they are done, david and i went out on friday to investigate and whaddaya know 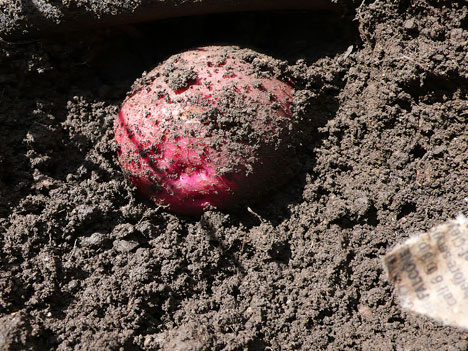 beautiful, big round potatoes awaited us under the earth. we just had to scratch around a bit for them and they turned up. we planted red cloud, yukon gold, king harry, and russian banana. 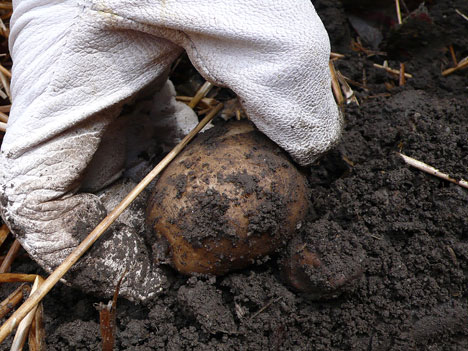 we pulled several large ones and a few small ones—just enough for dinner. we’ll go back for more as needed, until the frost comes, when we’ll dig up what’s left to store down in the root cellar. 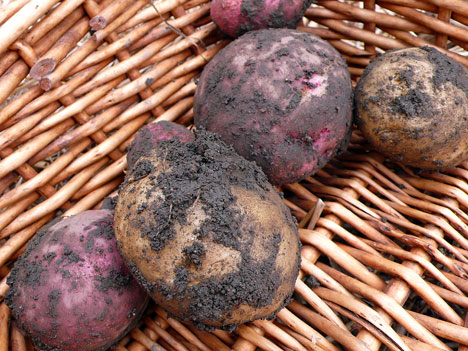 i couldn’t be more thrilled and excited that A) they are indeed, fine and B) that we can now eat fresh dug potatoes. thank you for encouraging me to look underneath; it was totally worth it. that night i made mashed potatoes with roasted garlic and fresh parsley for dinner and it was deLISH. 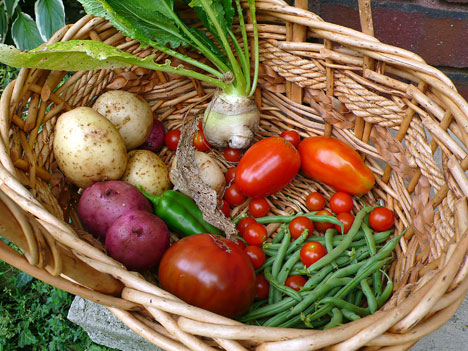 while david ran in and washed the potatoes, i picked a last handful of green beans (i do think the plants are done now), a few tomatoes, and pulled a turnip that day; plenty to round out a nice supper. mmm.

i haven’t been out thee since friday, but i think this afternoon i may go pull the bean plants and reseed that spot with chard. then clip back the existing chard plants to see if they’ll revive themselves.

in knitting news, not that much is new. i meant to work evenly on my two sweater backs this weekend but then got addicted to working on the blümchen one and rationalized it by telling myself i was simply getting it caught up with the rené piece. 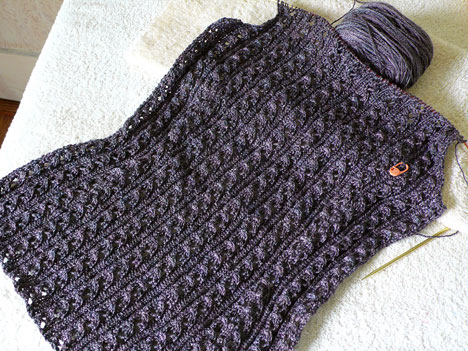 they are now just about even and since i really owe it to the rené sweater to move forward at least as much, i’m going to make a big effort to leave blümchen in its project bag “just for today”.

i figure that even if i fail grandly at keeping my hands off of blümchen, i’m still finishing one or the other of these back pieces tonight and really—how bad can that be?

beckie and i went shopping yesterday and if you didn’t notice the smoke coming off of our credit cards from where you are, you must have been doing something REALLY fun.

we started out looking for a top for me to wear to james’s wedding next weekend (i KNOW; nice time to start looking right? but trust me, i had a good excuse for not shopping earlier). it’s to go with a beautiful long missoni-esque skirt i’m excited to finally be wearing after owning it for too many years now; i bought it when i lived in NYC and haven’t had a chance get this dressed up since, but it will be perfect for this event.

anyway, we got out there and everything was not just on sale, but there were really BIG sales on all the sale prices. so everything was at least 75% off. we found a top right away that was perfect, along with several things for beckie—it was almost too easy.

and the trouble started when we kept going; in fact, we stayed out all day. honestly, i didn’t buy that many things, but i did buy a couple of larger items, including a raincoat.

and if giant sales weren’t a harbinger of fall, then this next sighting certainly is 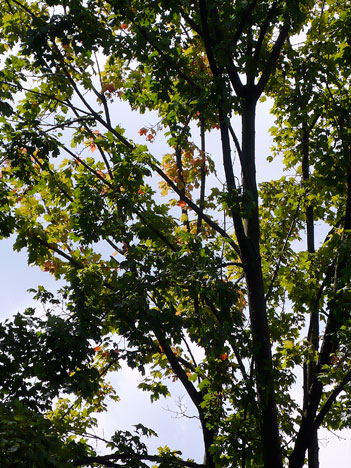 the first turning leaves on our sugar maple. sigh.