it’s a real cornucopia today, as i have had a couple of days of very distracted knitting. that is, with not much time on my hands, i picked up this thing or that, and worked just a little bit, then headed off to do something completely unrelated. 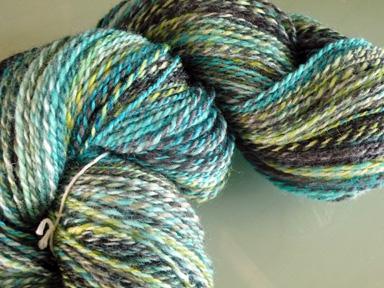 spunky eclectic merino/silk in midnight run colorway. i skeined it and washed it up last night, so it’s still a tad damp in this photo, and hasn’t acieved its full poofiness yet. i have about 432 yards of a sport weight-ish yarn here.

i split the roving into 2 lengths, and split each length into 4 strips, which i then spun onto 2 separate bobbins. i mixed the strips randomly, and for one bobbin, i turned the strips around make the colors feed on in the opposite direction. it’s still somewhat stripey, but very mixed.
the colors are different than anything i’ve spun in a while and they excite me. i think this is almost certain to become something rippled. just an idea, but it won’t go away.

and of course, you didn’t really think i would let those ragg sox lie around and moulder, did you? 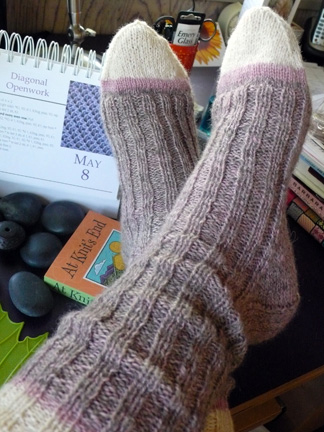 done. i’m so happy to have these off the needles i could cry. it’s getting too warm to have heavy socks in my hands—smooth, cool yarns feel better now. these have a nice, loose, slipper-sock feeling. great to wear with boots (as in herman survivors, or doc martens)

one of the reasons my knitting has been distracted is that we have been working in the yard some. we went to get some of our plants, and i filled the concrete pots that are here and there in the yard. 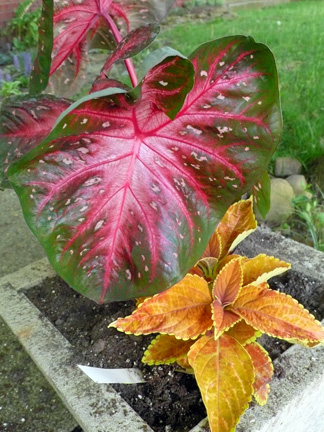 i adore calladiums and coleus. it’s the weird coloring i am attracted to. just can’t get enough of it. david made these concrete planters a few years ago and they are perfect for filling with these shade plants. and we have plenty of shade.
i found some begonia rex i wasn’t familiar with (ha! like i’m actually enough of a gardner to be “familiar with” what’s out there . . .)

they look hand painted—how could i resist?
we got the vegetable plants too, but i didn’t get those into the ground yet—maybe tomorrow.

speaking of nature and the outdoors, i started treeScum 2 because this is another pair i would like to be finished ASAP 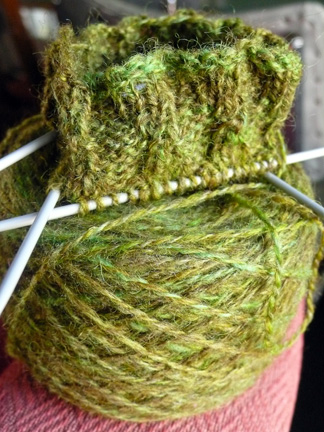 is it my imagination, or did the first one seem to take forever?? i really hope that was just a case of first sock syndorme and that this one just flies off the needles. where are those sock-knitting fairies when i need them??

and then i got started on a new one. i’ve had this idea for a while. i saw the stitch in a book and thought if i knit that into a top-down sock, it will be wrong-side-up in the fabric, and then it will look like golf tees.
and, if you’re not into golf or top-down socks, when you work the sock in the other direction, you get little eiffel towers

now in this photo it is just getting established, but i think it’s going to work. i know it looks like ice-cream cones here, but when you spread the fabric out (or put it on your leg), it looks like golf tees.

not a ra-ra crazy-for-golf sock. that would not really be my style, nor would it fit into the manLace series. but this, i think, does. but then, i’m not a golfer . . .

tomorrow, i think we’ll have some lace knitting; i’m not sure. the days have been flying by, and even though i have been designing like crazy, i don’t seem to have much to show for it.

yesterday, i sent my first-EVER submission off to a magazine. i’ve not done it before because i didn’t have much confidence going up against “famous” people; i just cringe at the thought of people laughing at my work (and i find secret knitting extremely difficult).
but, i realized that was sounding rather paranoid and presumptuous, even to myself
i mean, if a piece doesn’t get accepted, it’s fine—i can then have it back just for us to play with here.

still, i was shaking when i handed the envelope to the mail carrier. maybe other people do this kind of thing easily, but for me, it’s much harder. but i did it now, so that’s water under the bridge.

the thing is, this is the month of getting ready for submissions. i have one or two more to get out, and they will take a time and knitting that i can’t share on the blog. just so you know.

ok, i’ll stop talking about that now. let’s look at another nature picture 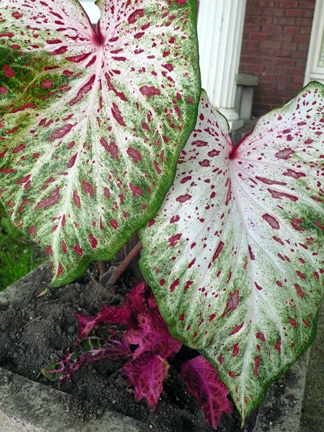 this weekend i am going on a trip to new york state, leaving friday. actually i’m tagging along with a friend who is going to a conference on harp tuning (i am NOT making that up) in the catskills. i will continue on to albany to spend mother’s day weekend with my mom. and i’m also going to be picking up a very special surprise or two . . . as always, i just wish this trip was longer so that i could visit friends. i must make time to do a special trip JUST for that soon.

so, i am planning on posting tomorrw, but it’s possible that i just will not be able to get to it. becasue, of course, i have not even given a thought to packing or getting ready in any way (like loading a few books onto the iP*d for one—hey, good sounds before clean underwear, i always say . . .). and i haven’t organized which knitting i am taking either, which is what makes me most nervous of all.

52 thoughts on “lots of little bits of knits”