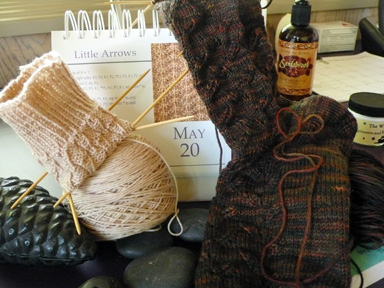 poor socks have been almost completely ignored this week. between the garden and the big knitting projects, the poor little guys have suffered. maybe this week they will see more action.

mystery project gave me a run for my money this week. it’s a good-sized piece, you know, and on thursday, when i was about 10 inches into it, i had a crisis of quantity—i looked at my piece and i looked at the remaining one-of-a-kind yarn and knew that i wouldn’t make it to a length that would even approximate my expectations. i also knew that it was knitting up wider than my estimation.

after skirting the issue for a few more rows (i’m on a deadline after all; going backwards didn’t seem productive), i realized i needed to stop shilly-shallying around, rip back, and start over with one less pattern repeat. it was my only hope of making it all work.

you know how sometimes, when you suck it up and do the right thing, even though you will lose time or money or dignity, it still doesn’t work out, and you are the only one who knows you really tried? (ok—let’s face it, that just doesn’t happen sometimes . . .)

well, this time, THAT didn’t happen. it all worked. everything felt more right-er as soon as i cast on again. the rows zipped along at a thrilling speed, and each completed repeat was a delight. the object fairly FLEW off the needles (well, sure i stayed up knitting til 4am thursday and friday, but who cares when it’s going well??). after a big push all day yesterday (i did not even look at the computer til evening), i had the thing done, soaked, and blocking by 9pm.

well. now that that’s all done, i can focus on some other commitments, and hopefully some variety. as soon as the last pin went into the blocking piece, i grabbed the orchid scarf and added a few repeats. 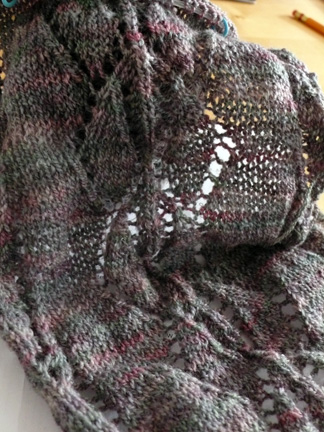 it felt weird not being on size 11 needles anymore, but also comforting to have this soft, light wisp of a thing in my hands. my shoulder was aching from the big piece—knitting on thick needles wrecks my neck (or maybe i’m just really out of shape, ya think?). anyway, this scarf is moving very fast too—it seems like i can add a few repeats in no time.

(is anyone else getting the sense that a sort of knitting mania has taken hold of me and my household? well, it’s time you all knew—i’m not normal. you’ll have to adjust.)

of course, as with all mania, there comes a moment when the affected body falls like a tree. that happened around 11:30 last night. after a jolting twitch struck and then subsided, i looked at the scarf in my hands and realized that i had just knit at least a few stitches while dozing.
“but it’s early!” i wailed to myself.
“go to bed, ” i wailed back.
and so i obeyed.

naturally, i was wide awake by 5:30. but you know, that’s a very good time of day to start something new, and i know you’ve been waiting for this 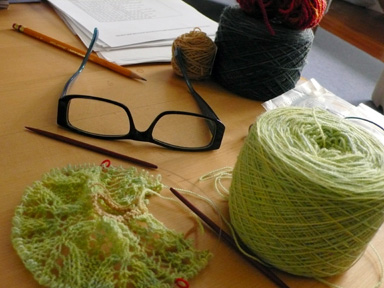 not much to look at yet, but there is a whole afternoon (and evening) ahead of me. had a couple of false starts where i miscounted and then changed my mind, but now it’s on it’s way.
i’m pretty excited . . . this one has been on my mind a long time. wish me luck!

we are still getting the yard in shape for summer, too, so i need to get outside for a little while at least. the vegetables are all in the ground now, but david tore up a terrible-looking patch in the back yard, so that we could plant it with some nice things. it used to look like this 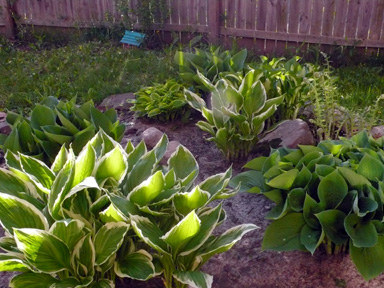 the hosta bed was nice, but the background part all along the fence was scruffy and weed-ridden, with our lilies struggling to hold their ground. now it looks like this 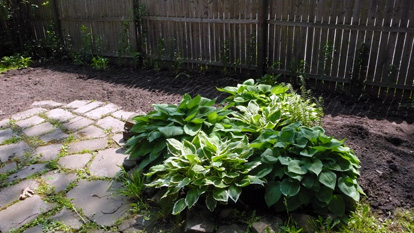 this is a small area outside the back door. it has an old slate patio which david re-laid a couple of years ago. i go out there for fresh air breaks a few times a day, to just sit and watch the plants grow for a minute or two.

(wow, look how big the hostas got in 2 weeks). david dug a new bed all along the fence, and we spread out the asiatic lilies more. they needed more space because they propogated so well this year. we’ll fill in the rest with more hostas, coleus, and other shade-loving plants.
we are on a mission to eventually replace all of the horrible, scrappy, weed-infested lawn surrounding the house with ground covers and plantings instead. you can’t grow a nice lawn in deep shade anyway—i don’t know why anyone ever tried that so close to the building.

it’s much nicer and more private than the front garden area, and we’ve worked harder and more creatively on it. some day we will do the same with the part that shows, but for now, this part is more appealing . . .

30 thoughts on “no time for socks”