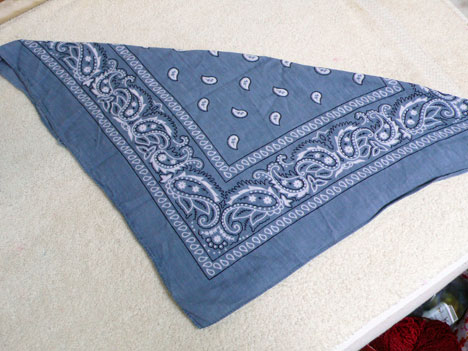 just before i went to rhinebeck, i showed you the beginnings of a shawlette that was inspired by the common bandana, an accessory which has been a part of my wardrobe as long as i can remember.

besides their intriguing printed surfaces, bandanas are incredibly useful—i don’t think a day went by in college that i didn’t knot one around my neck and nowadays, i use them to cover my head when i work around the house or in the garden. i like to keep one in my garden tote to wipe my face or hands as i work. david wears his on a daily basis and has a large stack of plain and printed bandanas on top of his dresser.

several years ago, i got the idea that the bandana design would make a great triangle shawl design for a guy—well, for a woman too, but i really liked the idea of incorporating something like this into my little collection of manLace pieces (i.e., anything david would wear that has openwork stitches). i even have a skein of cotton/wool yarn around here somewhere that i purchased for just this project.

when my friend erica at kollage yarns asked me to design something for their spring collection in riveting sport recycled denim yarn, i realized it was a good fit for this long-smoldering design idea. 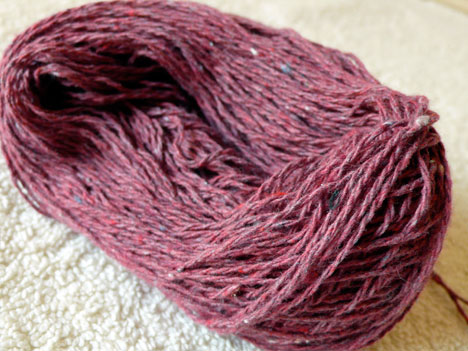 i love, LOVE the charcoal colorway, but chose to work with lava because i thought it might photograph better (but still kicking myself that i didn’t pick charcoal—dang it. i’m just gonna have to design a skirt with that color, i think).

once i got to sit down at the drawing board with it, i picked my stitch patterns with lightening speed, drew up some charts, and cast on, then packed everything into a project bag to take along on my trip. 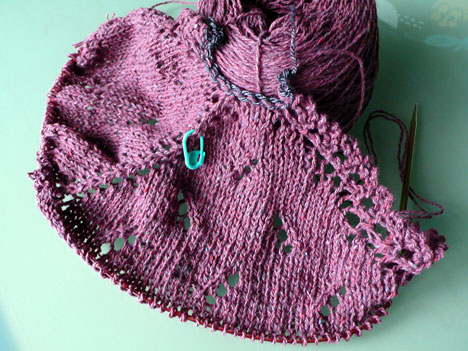 now, i really didn’t expect to love this yarn as much as i do—it’s cotton, you know?? and denim at that. but as it turns out, i really DO like knitting with it. yes, it’s denim and we’ve all handled denim yarns that bite back, but this one isn’t like that at all—it’s crisp but not hard and on the right needle size it knits up to a nice, soft fabric with a surface that feels like the proverbial well-worn jeans. i was seriously surprised.

i liked it so much in fact, that throughout my trip this was my go-to project and i made excellent progress on it (great car knitting; just ask beckie). by the time i got home, i was honing in on the last of the hem. 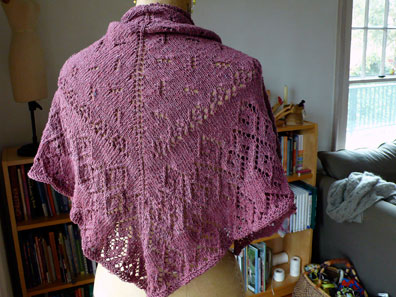 i made the prototype a little too big—i got carried away, what can i say?? (and that’s an unblocked shawl, so no judging yet!). since i had that second skein, i decided to go for it. but what i ended up with was not the neckerchief look i had in my head.

no worries, i adjusted the pattern accordingly and now it not only is a cuter size, but it can be knit from just one skein (karolyn and jocelyn are proving it as we speak). 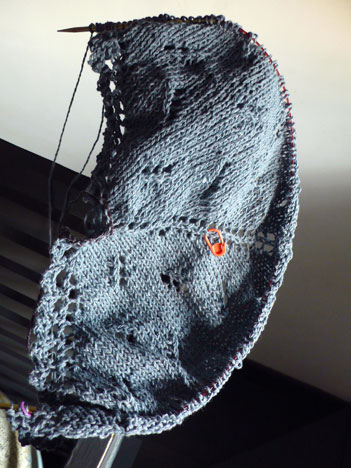 i really, really enjoyed knitting this and i missed it a little bit after i was done. i rationalized that since i had rewritten the pattern and since i had a single skein of that same yarn in storm colorway, i should cast on a little one for myself—you know, as a popcorn project (something mindless you knit while watching TV).

it’s that time of year when having an extra giftable FO on hand is never a bad idea. and david looks so handsome in denim blue. 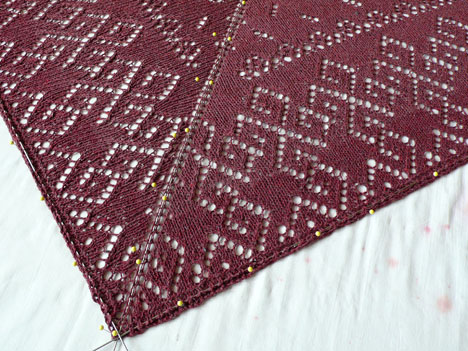 in the meantime, i blocked my protoype yesterday and wow—what a change. the fabric really smoothed out and the stitch patterns now pop in a way the they hadn’t before 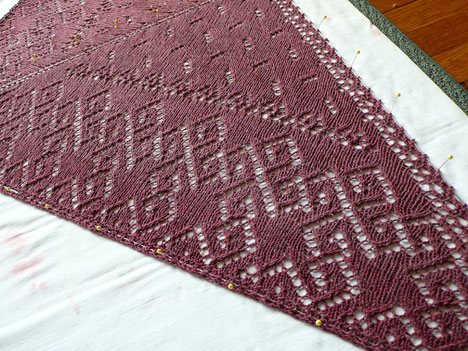 where before, i was skeptical that i’d actually met my goal of emulating a real bandana, i was now completely amazed at how accurate a replication it was—it was exactly what i’d been hoping for, but wasn’t sure i actually achieved.

from the faded red to the combination of patterns, it looks like the real mccoy; i’m sold. there is a remaining issue of the blocked fabric being a little stiff, but i’m going to experiment with using fabric softener or unicorn fabric rinse to see if i can soften it up.

this pattern will be offered in the kollage spring collection, to be sold on patternfish (not in our own shops); we will let you know when it becomes available.

ooops, beckie is here to do some work so i gotta run (i’m not even going to proofread this, sorry); i know i promised a yarn parade and it’s coming—we’ll do that next time!