the mail goddess brought great stuff today, and good thing, too, because none of my knitting is that much further along to wow you with.

i did get a bunch done on the orchid scarf in classes today, but i won’t have nice picture til tomorrow.

so we’ll just have to make do with some great stuff from adam. about a week ago or so, i sent adam some tree scum handspun yarn, thrown in a brown box without adornment of any kind.
and today i received this 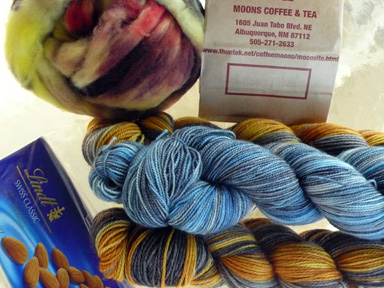 how embarrassed do i feel?? look at all this great stuff. yarn, fiber, chocolate, and coffee, too—whoa. i have GOT to hone my swapping skills, obviously. thanks, adam.

and how do you like that yarn? in person, it’s even better. it’s really nice. i picked a couple of colors—dijon mustard and charcoal gray—expecting somehow, to get two nearly-solid skeins. and he made a mixed colorway. that i love. serendipity to be sure.
he calls it “gray poupon”—ha!
it was going to be for david, but there’s plenty for me too.
adam, i hope you think about keeping this colorway in your collection; it’s pretty great. think of all the Falcons fans that need this . . .

the second color is “denims”, and i like its jeans-y feel; like the genuine article. this is his 900MHz weight; a fine, 100% merino sock yarn that knits up to about 9 sts/inch i would guess. the gray poupon is his 1500 MHz weight, which is heavier, and is a merino/nylon blend. and we love choices, right?

BTW, the roving is merino in colorway dallas; i haven’t had a chance to manhandle it yet, but it felt nice upon first groping . . . something else to try out on the new wheels.

and because he is so fun, and because i promised a picture of his yarn in my garden, 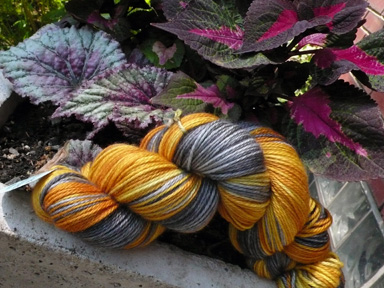 ok—and also because i could NOT resist its resemblance to a caterpillar . . .

and then, once i got out there, i just had to push the joke a little further (though the hangtags might give away the fact that they are not actual insects). 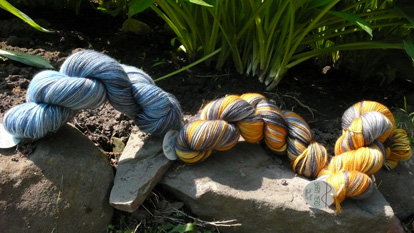 i SO was not expecting another package from ed and wanda, but there was one. just look at these trés delicate things 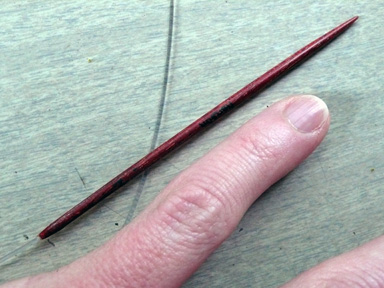 that is my pinkie finger next to ed’s latest—size 2 lace needles. now i realize that my little finger can hardly be classified as “little”, but these are still really tiny. just beautiful ed, and i thank you.

the join is so seamless, it deserves its own photo 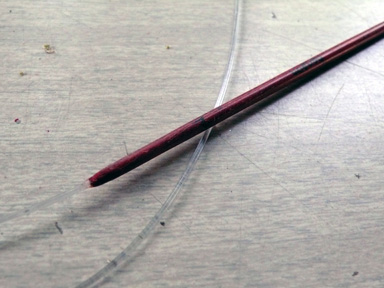 it’s just great that ed is working so hard to make these needles perfect. ten years ago, you wouldn’t even have imagined a knitting tool for the general market that was made through a process of back and forth conversation between woodworker and customer. this is the beauty of the internet, bringing us simple premium tools for handcrafting from specialty producers who hand craft them.
technology for better lo-tech. i LOVE it.