i have not allowed myself to even think about blogging this week til now. i’ve been buried deep in the pattern writing trenches. very deep. 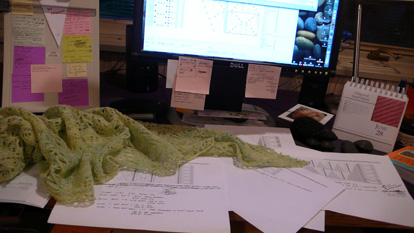 that is, when i’m not doing my job, which has been hectic this week. i have these documetns i’ve been getting back where each of the, oh, 100 or so pages looks like a cy twombly drawing gone awry. i SO wish i could show you some of them—seriously, they are hiLARious—just one rat’s nest of markups after another (it’s my job to sort out what the proofers wrote, and then pick through the digital text and fix it. fun, huh? oh yeah, and make sure it all still fits on the page AND looks pretty).

but i’ve been very diligent and have finally gotten the first part of the bee pattern out to the test knitters. see? 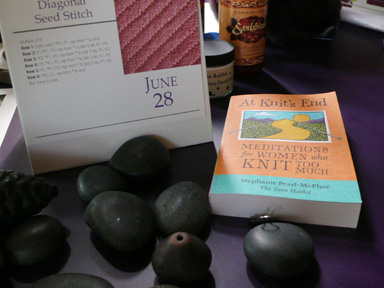 i don’t even have a sock on my desk. in fact—and you might want to sit down for this—i have just one project on the needles right now, and it’s a sock.

the pattern writing part is good, though when i first saw the pattern notes that were exported from the charts, i almost passed out. well, heh, there’s a lot going on in the bee shawl.
not to worry; none of it is very difficult to knit, but the choreography and orchestration are somewhat challenging. and it’s always a big job to make something easier for the end user, which is sort of a thing with me.

patternmaking is a very interesting vocation. i’ve been doing it professionally now for a long time—about 25 years, first in the dress-and-costume trades, then in knitwear. and i’ve always worked with one-off, couture, or first patterns. that is, i have spent a lot of time translating ideas into hardcopy.

as a first-pattern cutter, you are given all sorts of descriptive material—sketches, swatches, verbal descriptions, photos of similar shapes—and little, if any, actual data or tangible model to work off of. you begin by draping fabric on a dress form, and sculpting it with scissors and pins into what you think the designer wants. then you go back and forth, stitching and honing it til it is either overworked and awful, or until it clicks and is wonderful. then you take it apart and make a pattern from that.

with knitting, it’s even better—you have to create the fabric AS you sculpt it.

in both cases, the wider, and more well-absorbed your experience, the more informed your choices are (i.e., you guess right more often). and in both cases, you will do a LOT of math; you will do a lot of redoing, too.
the work gets more and more concrete the closer you get to the end of the process.

it all starts out as a swirl of beautiful abstraction, and it all comes down to knowing the exact number of stitches you will have after repeating a 12-st pattern plus 3 nine times more plus the edge stitches and doubling that, then add 1 stitch. and you BETTER be right.

and the thing is, i love it. i love all that stuff. the idea that there is a process by which i can take the impressions of light, scent, sky, and sound, find a fiber that feels like that, knit it up into patterns that look like those things, and THEN turn it all into numbers and graphs on paper so that other people can do it too, just floors me.

i’ve been thinking a lot about the connection between mathematics, physics, and knitting, admittedly partly due to the job i was talking about earlier. i’m working on a book about how to teach high school students, and i’ve noticed, not for the first time, that when i work on the math and science parts, i literally have moments when my heart races from excitement (out of boredom, i often read the material i am formatting—i know—just think of it as a kind of multitasking . . . instead of what it really is). i mean it—my heart thumps from just rubbing elbows with math theory.

i have similar moments with knitting and designing, in case you were still in any doubt about the breadth of my nerdiness. social science, history, and business just don’t attract me in the same way, although visual art knocks my socks off too.

don’t get me wrong—i am far from being fluent or even literate in higher math and science. i just love the ideas and reactions they cause in my mind. i literally have visions of stuff i could make from reading about math and science.
check it out—at the end of the post, there’s a selection of book titles from a resource list in the book i’m working on; i’m thinking i might need to read some of them.

ok, i’ll stop being weird now, and show you a few more pictures. because there has, at least, been good food this week 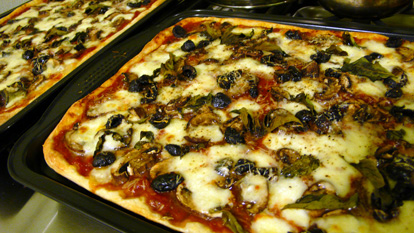 mmmm—pizza. with the last of last year’s tomatoes and herbs from this year’s garden
and then, the other day, i came downstairs from a quick nap late in the afternoon, and this was in the hallway 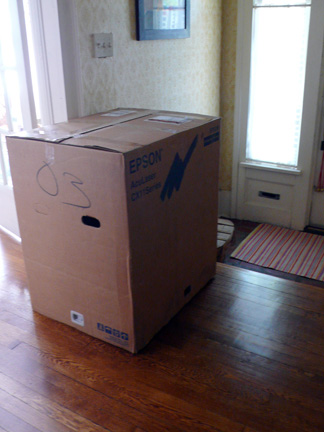 hmmm.
in case you aren’t fully appreciating the size of this box, i took a picture of it juxtaposed with my town bike 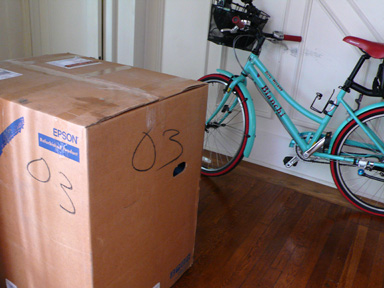 and from every angle we have a hint as to the contents. the light dawned so bright that i though my head would crack open.
david, is this the new printer?? (hey, i never said i was quick)
heh. (see, this is why he didn’t get to pick out my new camera last year.)

ok, i did remember that we discussed buying a much better printer, seeing as how i am printing almost constantly, and the old one was emitting streaky prints sometimes, for all it’s brilliantly turtlelike charm (translation, i was getting close to pitching it through a window . . . and we all know how that fax machine drawer got broken). 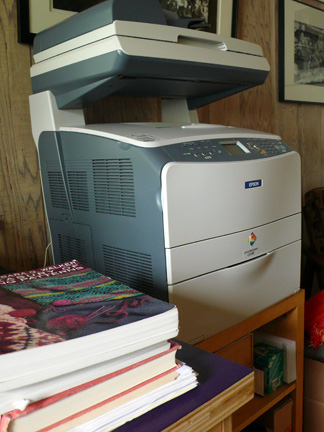 is it muhummed or the mountain?

well this thing is a wee bit bigger than i’d expected. but it prints lots of pages really fast and very crisply, which is a vast improvement over the old one. it replaces several of our ancient office machines (we are recycling those by selling them on ebay) and frees up a lot of surface area on our desktops.
so, it’s official—we are serious about the pattern printing business (we still prefer digital documents, but if we have to use paper, i’d rather it look great and use a minimum of supplies).

ok, that’s all for today. here’s the book list i promised—i just KNOW some of you are with me on this (oh shoot, just humor me so i don’t ever know i’m the only one) . . . and, ahem, i have full-length lists for anyone who wants them . . .

Abbott, E. Flatland: A Romance of Many Dimensions.London: Seeley & Co., 1884. 1985.
tell me you’re not curious
Boles, M., and R. Newman. The Golden Relationship: Art, Math, and Nature—Book 1: Universal Patterns. 2nd ed. Bradford, MA: Pythagorean Press, 1992.
everyone needs a golden relationship
Burger, Dionys. Sphereland: A Fantasy about Curved Spaces and an Expanding Universe. Translated by Cornelie J. Rheinboldt. New York: Crowell, 1965.
are you with me yet?
Cromwell, P. Polyhedra. New York: Cambridge University Press, 1999.
c’mon! polyhedra; who could resist?
Devlin, K. J. Mathematics, The Science of Patterns:The Search for Order in Life, Mind, and the Universe. New York: Scientific American Library, 1994.
ok, i think this one is my favorite and might move to the top of the list. if knitting isn’t the search fro order in life, mind, and the universe, then what the heck am i doing with my life?
Garland, T. H. Fascinating Fibonaccis: Mystery and Magic in Numbers. Palo Alto, CA: Dale Seymour Publications, 1987.
Grafton, C. B. Optical Designs in Motion with Moiré Overlays. New York: Dover Publications, 1976.
if this book isn’t chock full of knitting inspiration i’ll be really stunned
Huntley, H. E. The Divine Proportion: A Study in Mathematical Beauty. New York: Dover Publications, 1970.
anything that’s divine has to be on my bookshelf
Livio, M. The Golden Ratio: The Story of Phi, The World’s Most Astonishing Number. New York: Broadway Books, 2002.
hhmmm. the MOST astonishing number, eh . . . tell me you’re not wondering . . .
Locke, J. Isometric Perspective Designs and How to Create Them. New York: Dover Publications, 1981.
i want to create them—you betcha!
Mandelbrot, B. B. The Fractal Geometry of Nature. San Francisco: W. H. Freeman, 1983.
Miyazaki, K. An Adventure in Multidimensional Space: The Art and Geometry of Polygons, Polyhedra and Polytopes. New York: Wiley, 1986.
Pearce, P. Structure in Nature Is a Strategy for Design. Cambridge, MA: MIT Press, 1978.
Peitgen, H. O. The Beauty of Fractals: Images of Complex Dynamical Systems. New York: Springer-Verlag, 1986.
Stevens, P. S. Handbook of Regular Patterns: An Introduction to Symmetry in Two Dimensions.
Turner, H. Triad Optical Illusions and How to Design Them. New York: Dover Publications, 1978.

Cole, K. C. The Hole in the Universe: How Scientists Peered over the Edge of Emptiness and Found Everything. Harvest Books, 2001.
ok, that’s the limit . . . i have GOT to see what’s beyond the edge of emptiness
Einstein, Albert. The World As I See It/Out of My Later Years. Quality Paperback Books, 1990.
Feynman, Richard. Six Easy Pieces: Essentials of Physics Explained by Its Most Brilliant Teacher. Perseus Books Group, 1996.
Greene, Brian. The Elegant Universe. Vintage, 2003.
this is so simple, so beautiful, so-o-o . . . elegant a title; it’s a must-read
Macaulay, David. The New Way Things Work. Houghton Mifflin/Walter Lorraine Books, 1998.
Teresi, Dick. Lost Discoveries: The Ancient Roots of Modern Science—from the Babylonians to the Maya. Simon & Schuster, 2002.
Macaulay, David. Building Big. Walter Lorraine Books/Houghton Mifflin, 2000.
This book discusses the building of dams, domes, skyscrapers, bridges, and tunnels.
Skurzynski, Gloria. Waves: Electromagnetic Universe. National Geographic Society, 1996.

seriously, i’m going to read some of these.