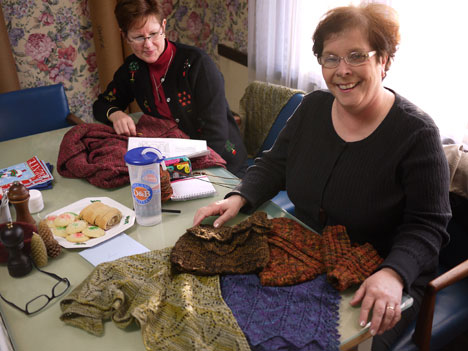 janet’s gonna kill me for putting her at the top of the blog, but i can’t help myself—i have very little knitting to show you and as far as things of knitterly interest go, the scale is tipping dangerously away from my pitiful holiday progress and toward her pile of wonders.

janet is just one among many of our fall in full color club members who are keeping up with each month’s shipment and who, after receiving the first four installments, has a beautiful pile of knits to show for it. 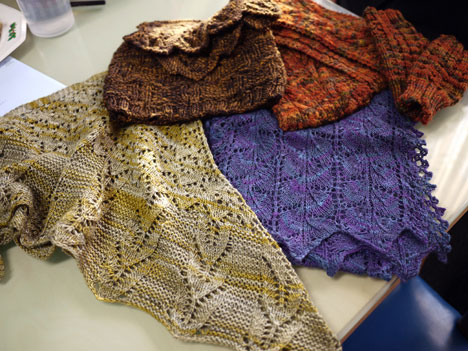 just look at her gorgeous FOs—from front to back, there’s the green hazeline shawlette, the blue longshadows scarf, the dark brown/gold set of haselnüsse and woodstacking neckwarmers, and the red/orange oktober zest set. and still two shipments to go!

all of my monday knitting students joined the fall club and each month we do the reveal during the class that lands closest to the shipping date. everyone closes their eyes while i place a package in front of each person and then they all open them at once. it’s hiLARious—totally worth the price of admission, so to speak. haha, i just wish you could hear the squealing and excitement (i keep telling david he should record or film it one of these times!). this month was particularly noisy, hee-hee, and we didn’t even have debby there.

it makes david and me really REALLY happy that we decided to do the clubs; we so enjoy planning and putting together the club’s design and further, all the positive energy and activity that is generated by the yarn choices, the eBook chapters, the goodies, and especially the clubhouse (well, thanks to our moderators kim and kat, the clubhouse would be a blast even if there wasn’t a club, haha).

we are in the midst of finalizing our yarn selections for the later months of the barenaked spring summer club now and the first shipments of yarn are on their way. i feel confident that the treasures to be had will be equally fulfilling and fun. i’ve actually got the yarn for the first project (it’s deLISH!) already packed to take along to albany next week; i’ll cast on and knit it while we visit with my family for a few days over christmas.

anyway, all that to say thank you to all of our current and future members for making the clubs so rewarding and fun. we are excited about all who signed up for another round, for those who are new to us and for those we don’t know yet. we still have space for anyone who wants to join the fun; we are that warm toasty fire when you need a break from the cold, haha. 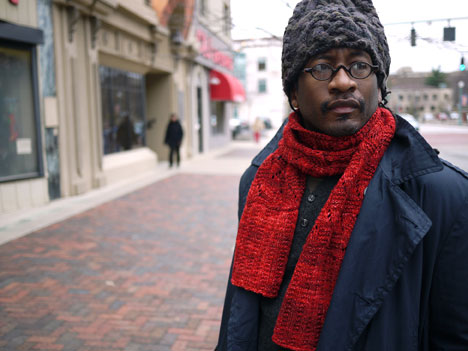 i wanted to let you know that sales of the crazy quilt scarf have have passed 225 copies and continue to rise—go YOU. and we still have 17.5 days left in december to rack up sales that will be forwarded to the red scarf project fund.

if you’re not sure what i’m talking about, you can refer back to my december 6 post to read more about our december crazy quilt/red scarf fundraiser (click here for information about foster care to success programs). 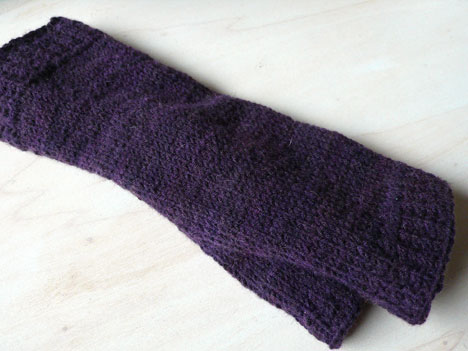 i’ve been working hard on patterns this week in an effort to get several into shape for proofreading before i go away. i’m also creating the layout for the december eBook chapter, which is always crazy time for me, haha. i accumulate photos and bits of information with abandon for weeks or even months in advance, then i have to sort, pare it down, write it, edit, and organize what remains into a book chapter. naturally, i never give myself as much time as i’d like, so it’s always a race to the finish, haha. hopefully, it doesn’t show too much.

anyway, despite the paperwork, i do have a few meager knit bits to offer . . . 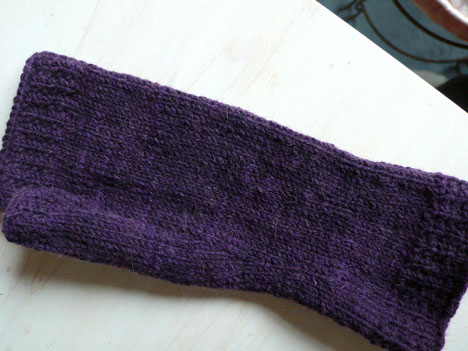 i finished my holda mitt in the fig colorway on monday—pretty much in one long sitting between class and an evening visit with my friend kris. isn’t it rich?? i just adore this color and today it photographed perfectly, despite the rain and dark gray sky. the second mitt is underway and there will be an ear warmer to match.

i kept the wrist shaping in my prototype, but i won’t be using it in future versions—the reason is that in order to include the shaping, i would have been forced to eliminate some of the sizes and i really wanted this pattern to span the whole family size range (i think you do too).

then i sat down and wrote up the pattern, which went off to the proofreader last night. i was really itchy to try out the kid sizes to see how i did with the proportions, so even though it was already midnight, i ran up and wound some yarn before we sat down to watch TV.

(poor david—any given coffee table in our house is perpetually covered with yarn creep almost all the time, even this gorgeous walnut one that he built)

while i love the holda luxury blend as my first choice for this design, i wanted to try the pattern out with something a little more springy, closer to what more people might have on hand to work with. i also wanted something a little more hardwearing—superwash if possible—because this set will be a gift for a kid who has more important things to do than stay clean.

i remembered that deb from fearless fibers sent me her gorgeous MCN luxury DK a little while back so i dug that out and wound it up. 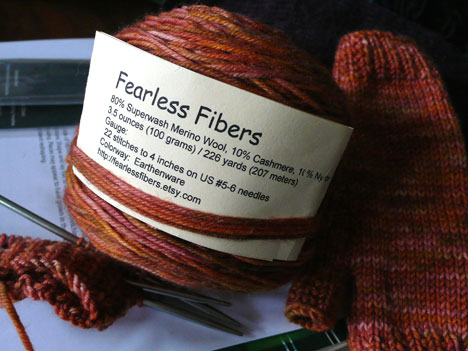 yum! the earthenware is a great color for my niece mary, i think. the gauge of my favorite fabric was a tad off, so i used a bigger needle and knit the instructions for a size smaller than i wanted and the mitt ended up being the just size i was aiming for (the largest child size). 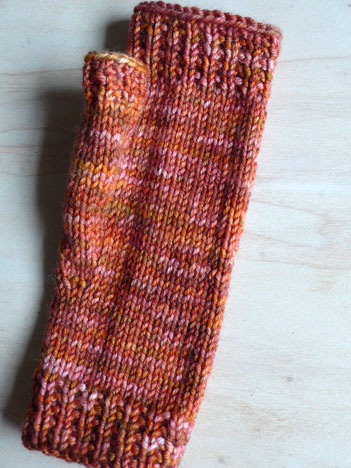 so cute! it’s dense and squishy and soft; all qualities that are much appreciated by kids and by knitters alike. the earband is going to be great in it. mary’s going to have to play hardball to keep this from winding up on aaron or andrew’s heads (they won’t care that it’s pink when it feels so good).

this yarn would also be terrific for handsies or hot waffles, among other speedy gift knit choices.

so this pattern is on its way, yay; i’m hoping we can release it on monday. we’re doing a photo shoot tomorrow of the beret and long mitts so we can release that pattern on friday. and i’m working as fast as i can on that large leaf criss-cross scarf, but my eBook chapter takes priority over that one. and then there is next month’s club knit to finish and i’ve just GOTTA figure out what i’m knitting for you-know-who this year. i have a swatch and a sweater pattern, but it’s been challenging to actually find time to cast on.