oooh, so sorry for disappearing all week—between traveling and having houseguests—my dear nephew james and our niece-in-law diana came to visit—we’ve been hibernating a bit to enjoy the post-holiday week. we’ve filled it with nice, late breakfasts, sharing pictures of their wedding and honeymoon, and movie marathons. i think between home and the cineplex, we saw six movies in the last three days, haha.

now they are on their way home and i can catch you up on the knitting i have and have not been doing.

poor mister knitspot kinda got the shaft when it came to christmas knits this year. most everyone else got something handmade under the tree, but not david—what’s up with that?? especially since he’s gotten a new handknit sweater every year for the last decade or so.

ugh, i didn’t even get a hat made, that’s how hectic and behind i’ve been all this year. now that the holiday is past and all the gift knitting is done, however, i’m trying to make up for the lack of cozy manly presents.

i figure i can approach the endeavor with more focus and thoughtfulness than usual if i devote this post-holiday period to things for him. 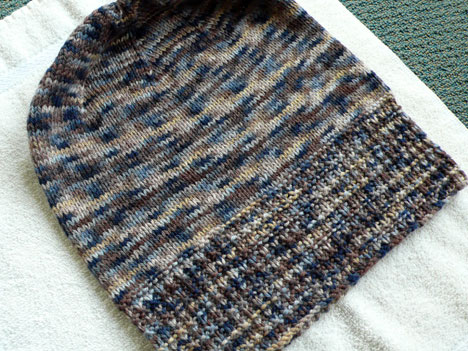 first up is this wonderfully soft and slouchy hat i knit from shalimar honey worsted, a delicious machine wash australian wool yarn that totally does NOT feel like superwash. it’s really lovely stuff. 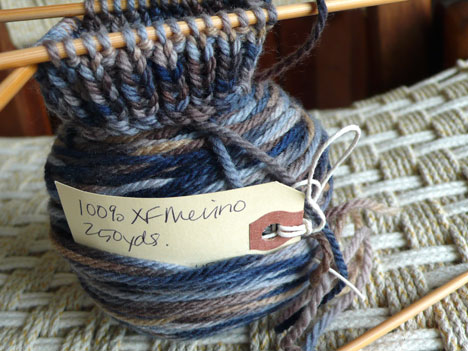 mmmmm.
i have no idea which colorway that is; it wasn’t marked and i can’t seem to match it to any of the pictured swatches. i do love it though and it goes with a lot of mister knitspot’s outerwear. his hat used about two-thirds of my available yarn; i don’t think there’s enough to knit a pair of mitts for him from the remainder, but i might be able to get a small pair out of it (or at least one prototype that would help me figure the yardage for other sizes).

the hat looks adorable on him and as luck would have it, when we went to see the girl with the dragon tattoo last night, the costuming included many examples of similar hats throughout, so he knows he’s right on the forward edge of the very chic, slouchy hat wave.

(and omg, i never thought i’d say it, but the david fincher version of that film is even better than the original—WAY better than i ever dreamed it would be. the clothing alone will knock your socks off. heck, the opening credits had me.) 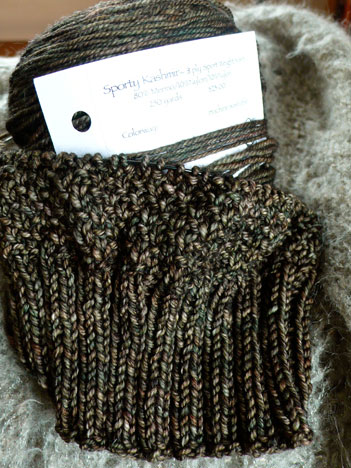 i am also going to get back to work on this sweater i started for david just before christmas in this beautiful woolen rabbit sporty kashmir, in colorway enchanted forest. kim’s recovering from back surgery right now, so she hasn’t got this yarn on her website yet, but i know she’ll have it up soon.

i started it pretty late—probably too late to get it done for christmas anyway, but THEN the whole project was waylaid when i discovered that last year’s christmas sweater—the rené i knit in handspun BFL??—had somehow gotten felted between last spring and this fall.

when i saw it a couple weeks ago, i was so heartsick about it that i just couldn’t get myself to knit on this year’s christmas sweater—even though i was using superwash and no way could it get felted. i just couldn’t make myself do it.

now i’ve gotten over that and am ready to go back to the new sweater project with renewed interest. (i have, however, told david not to wear the felted one in my sight until i’ve had a chance to try and recover its original shape; it’s too pathetic! and yes, i’ve undone felting before; i may be able to do it again . . . we shall see.)

it’s another remake of a sweater i knit for him years ago in a soft, charcoal gray yarn that, unfortunately, did not wear very well. the old one is just horrible looking but he continues to wear it. i would show you a photo but i can’t seem to find the offending garment anywhere—he’s probably hidden it away, knowing i’m on the warpath after it, haha.

it’s a very simple knit/purl fabric—very subtle, the way guys like it. unlike the original, which had no other ornamentation, i will probably add some simple, narrow cables at the side seams and armholes to better stabilize the fabric (the original, which was knit in the round, lost its shape somewhat and i’d prefer to avoid that). they will also add interest to the front of the cardigan version, which i plan to include in the pattern (much like the rené sweater). 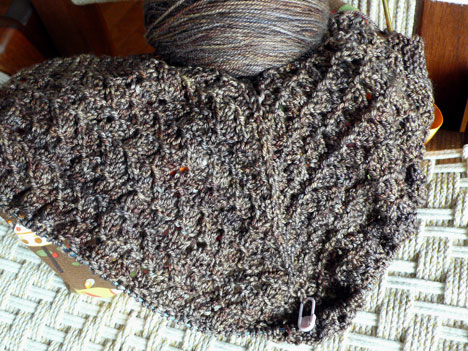 i’ve also gotten back to this little shawlette i’m knitting in hazel knits divine. i put it aside when i got to the point where i needed to do some calculations and now that i’ve had some time to work that out, i can proceed. this is a custom color i dyed during my visit to wendee’s studio, but it’s REALLY close to colorway arroyo, in a delicious blend of spice colors and brown.

just wait til you see the hem pattern on this one—it’s going to be gorgeous.

and ooops, i have to go get my hair cut now, so i’ve gotta run, but i’ll be back soon—happy new year!