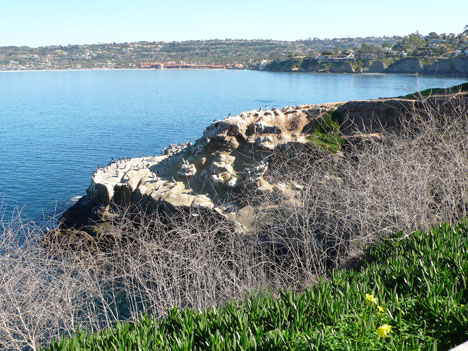 we have had a spectacular five days of vacation here in san diego—as usual, kim’s family has shown us a wonderful time. before we move on to visit family in las vegas (where we may not have internet access for blogging) i want to share some highlights from our adventures.

we landed early enough on thursday to get lunch at saffron (our favorite) on the way home form the airport and knit a little while we visited. then we both crashed for several hours.

when i got up it was late, so we spent the evening in with the boys, watching TV and overseeing their homework and, of course, knitting. 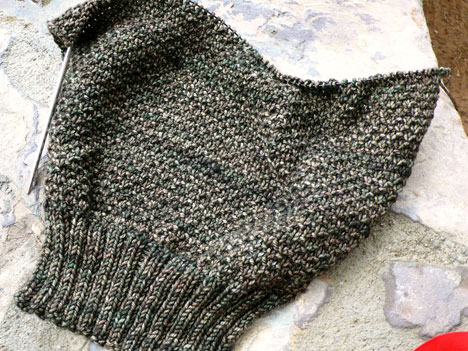 i worked on sleeve #2 of david’s new sweater in woolen rabbit sporty kashmir in colorway enchanted forest. i finished sleeve #1 in time to leave it behind at home and cast on this one at the airport when we took off.

i knit on it during the first flight out and the first evening here. then i switched to working on a rather large secret project, which i’m hoping to get mostly done on this trip; it would be great to have that completed when i get home on sunday morning.

all of that relaxing left us plenty rested for friday, when kim and i headed up to la jolla to meet jocelyn for lunch and a visit to blondstone (it’s become our tradition) 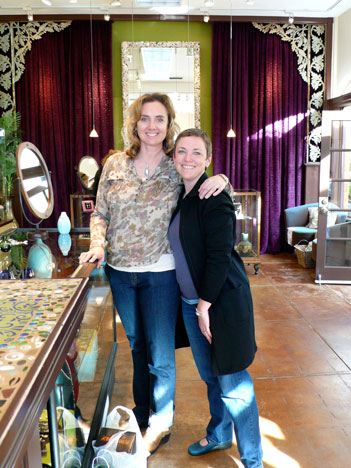 (where we were rather restrained, if i may say so myself.)
the weather was glorious that day—full sunshine and warm enough to walk around without a jacket and to eat outside instead of in. just what we came here for, mmmm. we shopped a bit and lunched a bit, chattering away the whole time—it’s great to catch up with jocelyn, who i don’t see often enough. 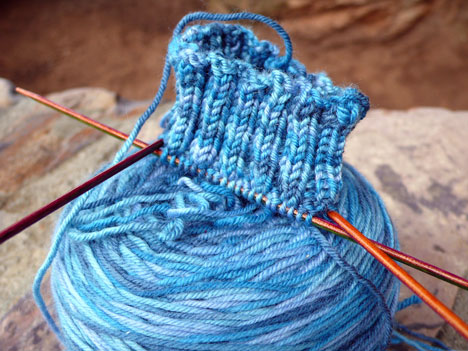 i knit a little bit in the car on the way down—i’ve started a new sock.
you heard right; a new sock. i wanted to knit a pair for our little nephew in las vegas, who is a great appreciator of handknit socks. i’m hoping to finish this pair before we leave there on saturday night, but as you can see, i’m not all that far along. thankfully, kid-sized socks don’t need to be so long; although this kid has pretty good-sized feet.

i’ll show you more of that project as it progresses; the stitch pattern is a nice knit/purl basketweave, mindless but fun enough to hold my attention for long stretches. my favorite for sock knitting. the yarn is kollage sock-a-licious, in his favorite color, blue heaven.

wish me luck. i know i should also cast on a hat for his little brother; maybe i’ll do that on the plane later today. i am woefully behind on knitting for these kids . . .

anyway, back to our present vacation rundown 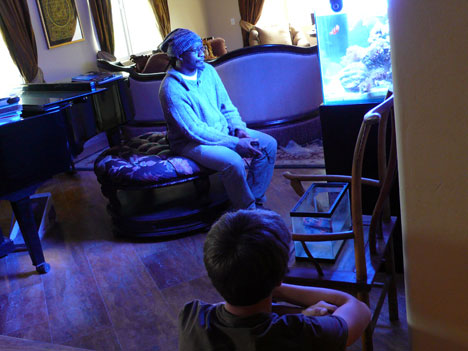 while i was knitting with kim and galavanting around la jolla, david was falling under the spell of kade’s salt water aquarium. he may even have a little film coming down the pike; not sure 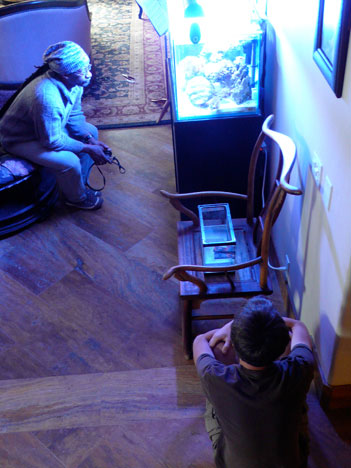 any time there was mostly nothing going on, the two of them would be glued to the happening spot in the house. kade let me know yesterday that he’s pretty sure we’re going to be getting one of these. hmmm. 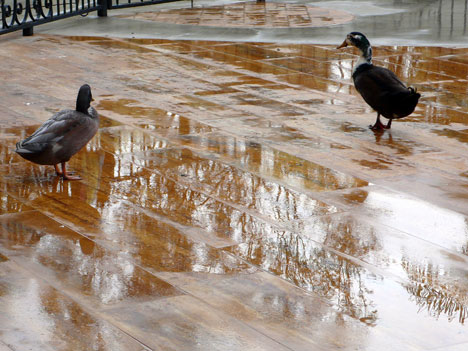 another new addition to kade’s menagerie for this visit are the ducks, firefly and morgan, who are a bit messier but no less loved. 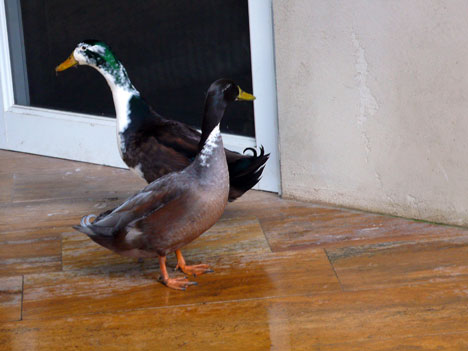 the chickens continue to thrive, of course, though they are getting older and eggs are not as plentiful as they used to be. 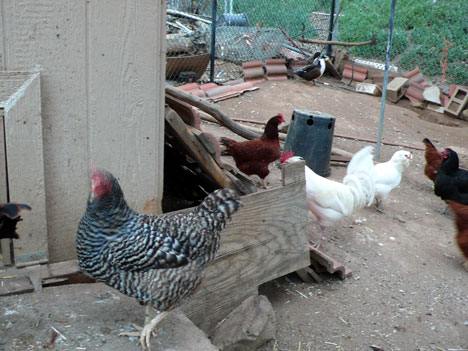 kade still loves them as much as ever, haha. 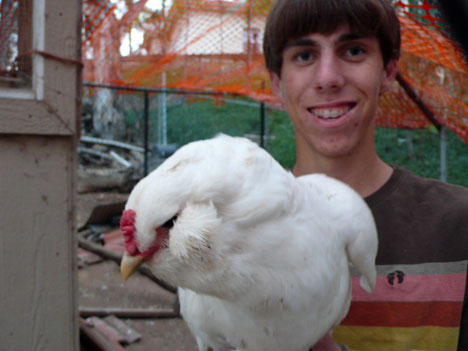 we had a nice walk through the orchard the other night with the whole family, getting an update on the trees and fruits this year.

the citrus trees are in full production, some heavy with fruit while others are just blooming now 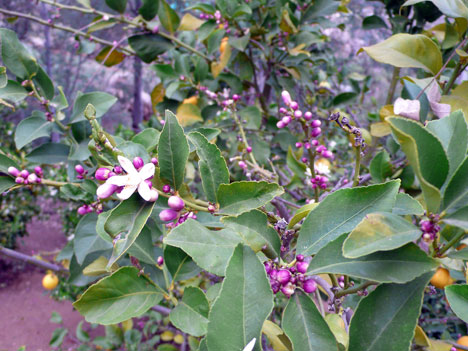 the fragrance is out of this world and a few trees are putting out a boatload of fruit and we have partaken generously while we had the chance, haha. 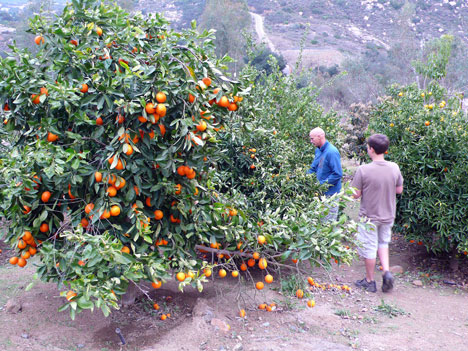 sam, who is the resident tree expert, tells us that this one has the best fruit so far this year and indeed, the tangelo that kelly tossed me to eat was really sweet and full-flavored. 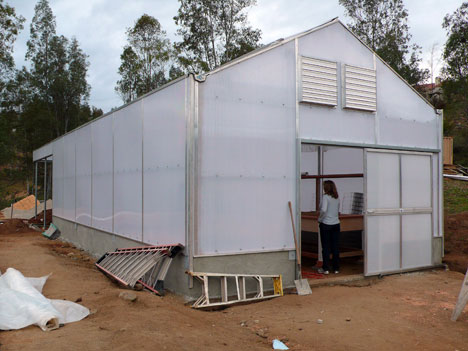 down at that bottom of the property is the site of kelly’s new obsession—a full-sized hydroponics operation. the shed will run entirely on solar power (as does the house and pool) 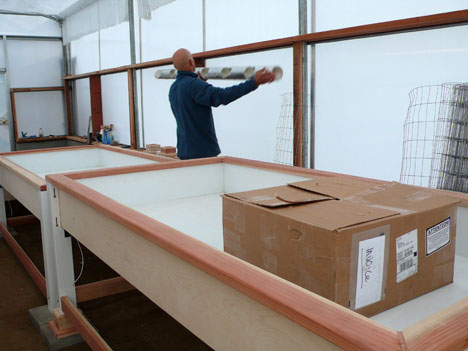 when completed he will grow a variety of greens, vegetables, berries, and fruit trees inside. in addition, there is a secondary shed for fish farming. they are already nursing some tilapia for it 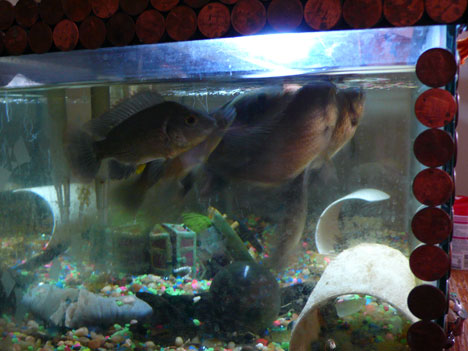 which, because it turned cold since the first of the year, had to be moved inside to a winter home in kade’s room.

on the way back up the hill, sam picked fruit for juicing (heavenly!) and kade brought us by franklin’s pen to see his growth over the year since our last visit 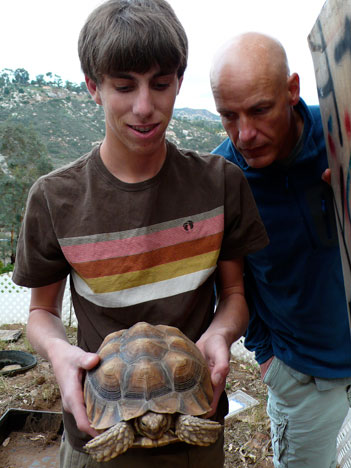 holy cow, he’s getting monstrous, heh.
one of the fun things we did together with the boys was to look back at old blog posts from my first visits here in 2008 and 2009. not only have the animals gotten big, but the boys too—they are both taller than kim now and kade is starting to plan what he’ll do when he’s done with high school next year. (ok, that one still stuns me; he was a little kid just last week!) 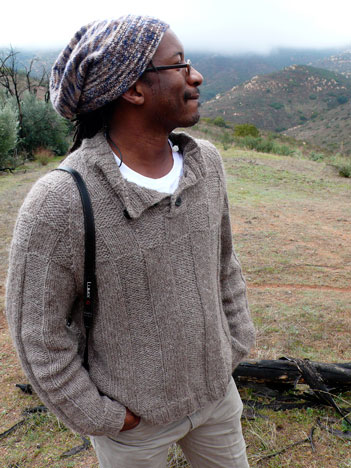 totally off-topic—david is getting a ton of wear from his slöfock hat on this trip; i think he really, really likes it, yay. and it’s certainly been chilly enough for it the last few days; i bet he’s glad he’s got it.

on saturday we drove to point loma to do the photo shoot for the last design issued in our fall in full color club. kim modeled and we got some gorgeous shots—the weather was balmy and brilliantly sunny; the light was amazing for what we needed.

on the way back we swung by ocean beach to visit the other blondstone shop, where we did do some damage, but in a good way. no one was hurt and that’s what counts, right?

we walked around and hit the beach just at sunset—wow

i love that pier; i was lucky to get some nice shots of it that day. 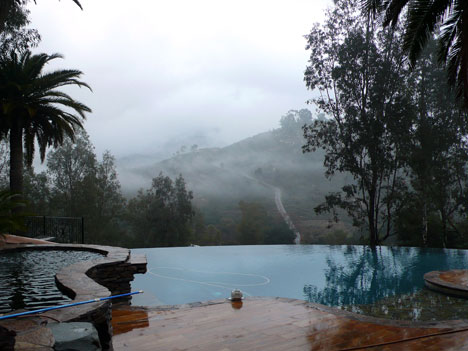 on sunday night and monday it actually rained; nothing like we get at home but it made for a misty, drizzly effect all day.

the boys were off from school, so once everyone was up and alive for the day, we all piled into the yukon and took a ride out to their hill property to take a look and hike around for a while. 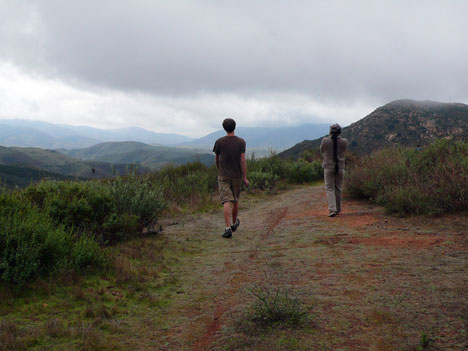 the property holds several olive groves and gorgeous terrain that is far away from any other buildings or people. 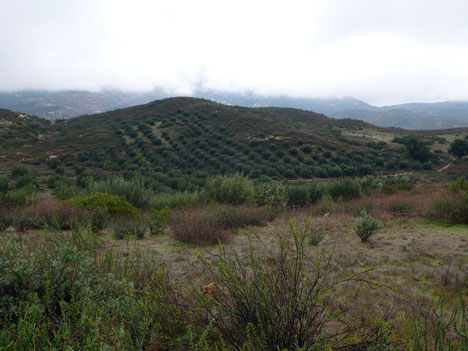 the views out here are fantastic and the property looks great—last time i was here in 2008, it was just after the fall 2007 wildfires had consumed most of the landscape. the trees were not just burnt, but gutted several feet down through their root balls and no one thought regrowth was even a possibility 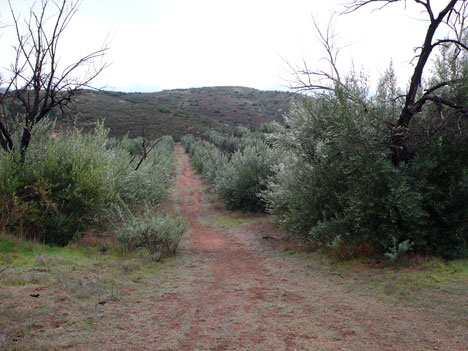 the roots smouldered like oil pots for months afterward. a few of them might have been still smoking when i saw them that may.
but look at them—they have made an astonishing recovery. 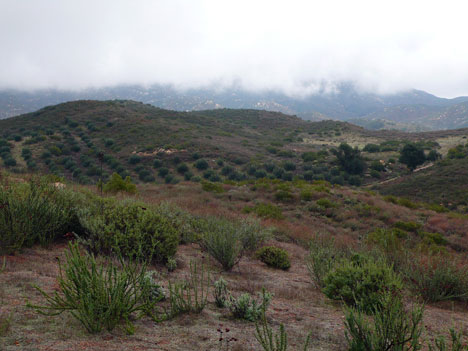 the new growth literally has pushed up from the center of the old root ball and shoved the charred remains of the old trees aside. 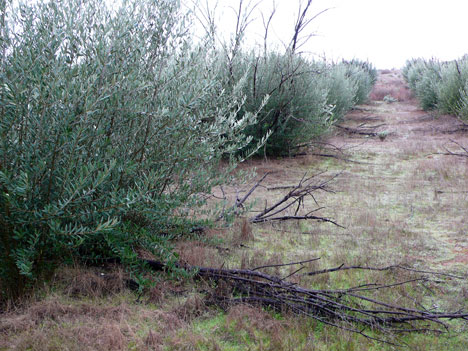 each tree site has a circle of blackened wood around it, breaking down slowly to fertilize the new growth. 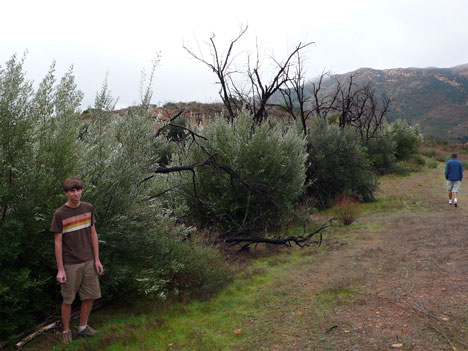 even though kim had told me it was growing back, i had no idea it would be so lush already. 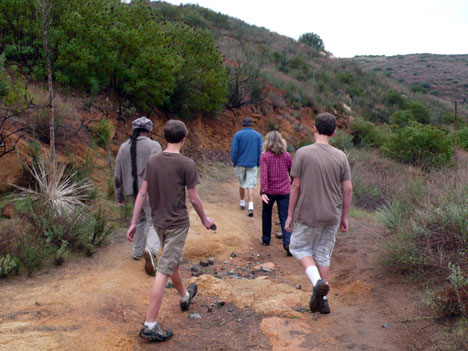 we hiked for about an hour, down to the valley where a small river runs through and different kinds of trees and plants thrive. 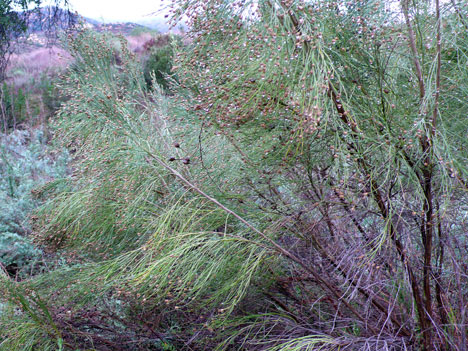 it was a chilly day though and wet, so we didn’t stay all afternoon. we headed back around lunchtime to eat and relax for the rest of the day. we had a bit of work to catch up on as well. 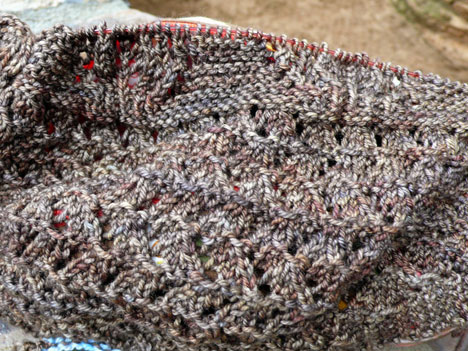 another project i’ve had a chance to reconvene with is the little shawlette i’m knitting with hazel knits divine. knit form neck to hem, it’s growing in size as i go and the rows are starting to feel a bit longer now. 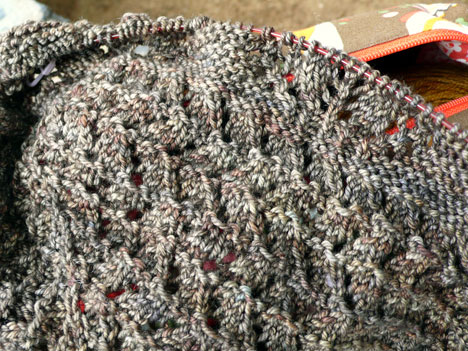 i finished the body section and started the hem during the second leg of our westbound flight, so i feel like i’m in pretty good shape. it’s a very enjoyable knit that i’m hoping to finish before i get home. that way, i can work on the pattern when i return, yay.

and now it’s time to close; i want to take one last morning walk with my buddy kim, then i have to pack my stuff; next stop, las vegas!
i’m really not sure what the internet situation will be there; i think they might not have it in the house. if that’s the case, i may be able to do email on my phone, but i don’t think blogging will be in the cards. i’ve set up a at least one post to go automatically, and i’m hoping to get another in as well, but i’m not sure it will happen.

if not, i’ll see you back at the ranch on sunday. 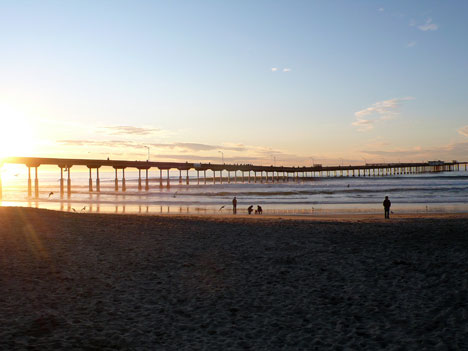 28 thoughts on “a little R&R never hurt anyone”