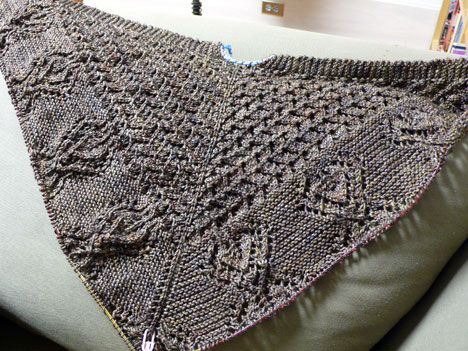 i’m one of those people who never gets sick—i can go years without even catching a cold. but three plane rides in the space of a week and five days full of kids left me carrying a cold home from las vegas.

we landed in a climate much warmer and moister than our usual january weather—the perfect petrie dish for brewing all sorts of nasties. of course i had to go and succumb to stomach flu within a few days, just as i was getting over the cold. ugh.

at least i was in good company—four of the six people in our monday knitting class were sick last week with it. i’m finally feeling better, but still hesitant about eating anything complicated. 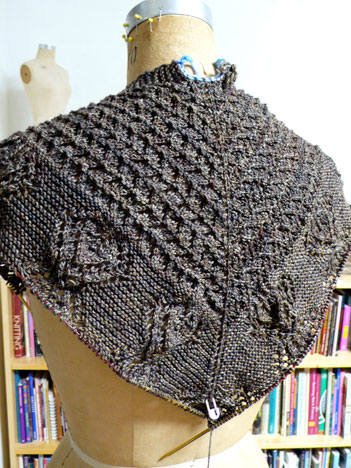 after the initial couple days of ick, i mostly just felt bleh—not really able to work at my desk, but not too sick to knit. so i got lots of project work done over the weekend. i took these photos when i had to switch to a longer needle on the hem of the new shawlette (yet to be named; i’m thinking of calling it grey gardens). 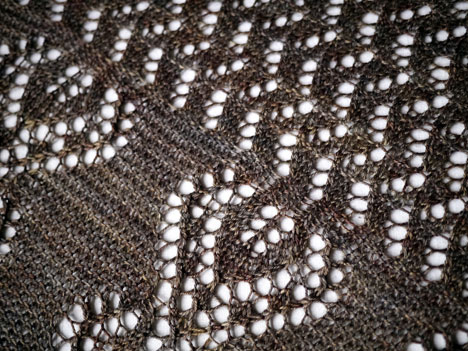 i actually finished up the knitting that night and blocked it on friday morning (maybe it was saturday?). the hazel knits divine looks gorgeous, doesn’t it? the silk and cashmere together have such a beautiful sheen, don’t they?

the piece blocked out a treat to a nice size—larger than i expected from what came off the needles. i love the mix of textures in it and of course, the rich, polished colors in the yarn. 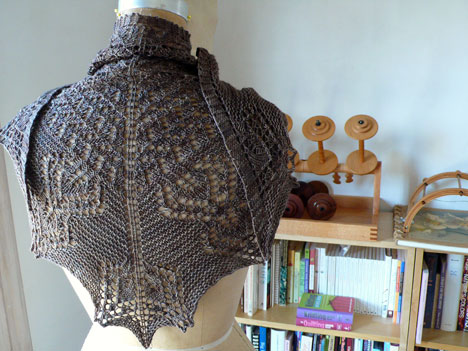 now i need to write up the pattern—i’m sadly behind on desk work at the moment. but with a couple of days of diligence, i should be able to catch up and pass it on to a test knitter. 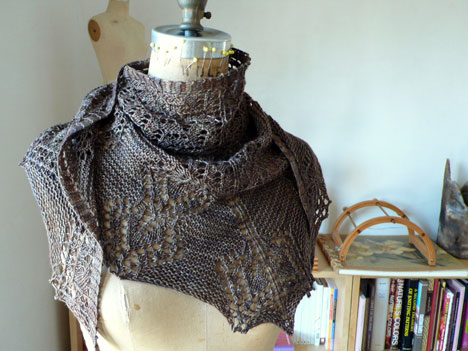 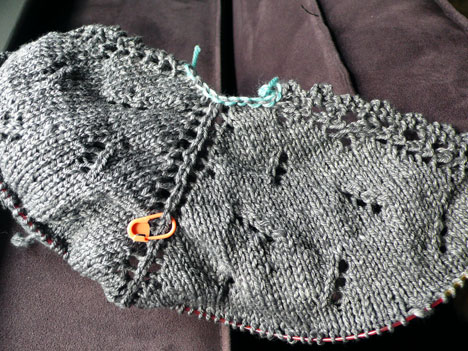 with that shawlette off the needles, i pulled out one of the ones i started in december to have in waiting as a grab-and-go project—a susannah shawlette in a lovely gray cotton/wool blend from maple creek farm (sorry, no direct link; i don’t believe they make this blend any more).

i enjoy knitting this project a lot and though i need a sample for our trunk show, the yarn is so appealingly soft that i may have to keep this one for myself.

and what of david’s sweater, you are probably wondering?

not to worry; being rather mindless, it saw LOTS of play over the weekend. i did have a mishap though, while visiting with a friend. i had started the large back piece, gotten through the ribbing, switched to my larger needle at the right time and proceeded to work in pattern. i thought it felt like it was growing awfully slow—and it seemed heavy as well. but i kept going a few more rows.

suddenly in mid sentence—and about two inches in—i finally saw what was wrong. 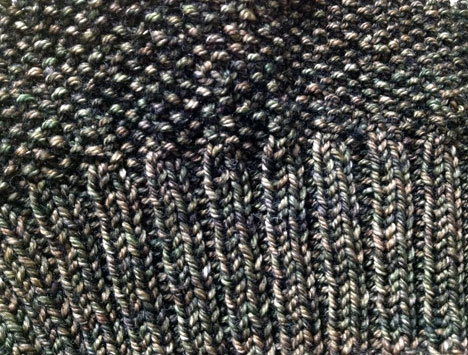 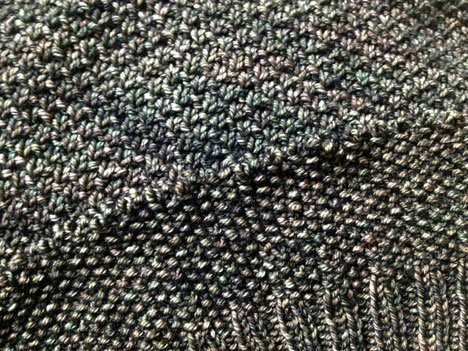 can you see it now?
that’s right, i was knitting the wrong pattern—seed stitch instead of pebble stitch. i’d forgotten to do my WS rows in purl for over two inches!! 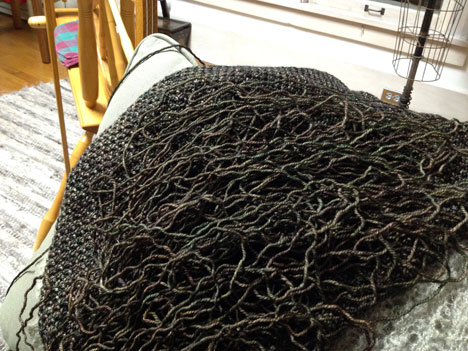 rrrriiiiipp.
my friend said it makes her feel immeasurably better when i do stuff like that. anything for my friends, haha.

the woolen rabbit sporty kashmir took the punishment very well, showing no wear or pilling to speak of from the ripping. 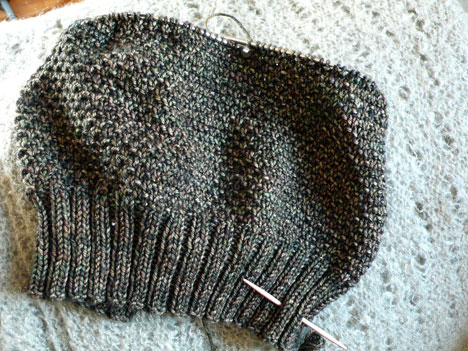 i’m back on the right track now and more than halfway to the underarm (it’s even bigger today than when the photo was taken yesterday).

do you want to see the cabled panels? they’re pretty subtle; david doesn’t like a lot of heavy cabling in most of his sweaters, unless they are specifically fisherman style. 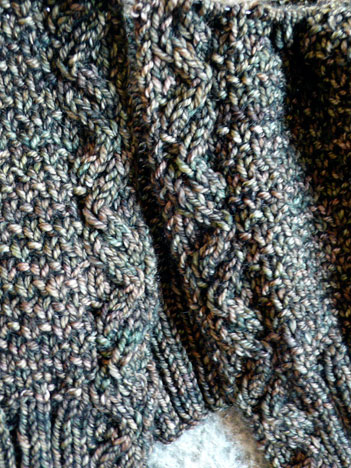 each side seam is getting half of a larger panel of overlaid diamond shapes. when the seam is sewn together it will look something like this

david will like this. and the color? sooo david.

on saturday, i felt good enough when i got up to make a big pot of pasta e fagioli (we had a lot of white beans in the cupboard), but truthfully, still not good enough to eat any til yesterday. i settled for sipping some of the broth with italian bread and that was plenty for me, haha.

while the soup was cooking, i cast on for david’s socks to match the ones i knit for amad. 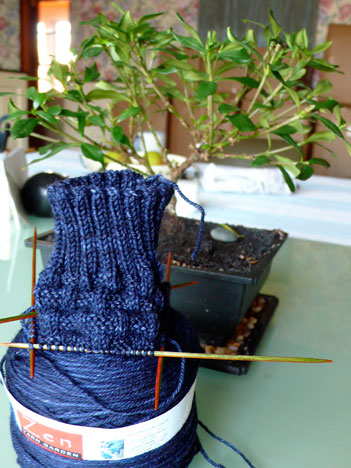 roxanne at zen yarn garden sent us a skein of david’s favorite smooshy sock at the end of the summer, so i could knit him something yummy.

isn’t that blue color amazing?? it was one of her artwalk sock club selections for last july and is inspired by the painting masculine waves (onami) by katsushika hokusai

the yarn is dyed in the magnificent, deep blue of japanese indigo fabrics, with dashes of undyed spots scattered throughout. the effect when it’s knit up is like ink on rice paper. 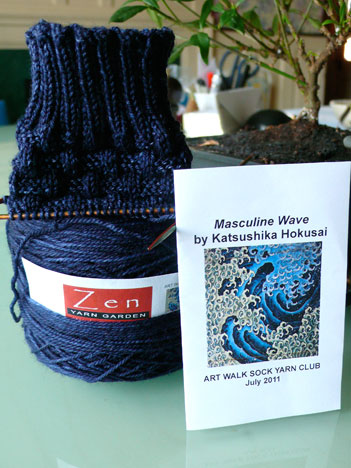 i’m going to try to stay on track with this project and finish the socks in a timely manner. i have to admit though, that the extra 24 sts per round very noticeable slows me down—they are not growing nearly as quickly as the child’s pair, which was, in itself, quite motivating for me. if i keep them front and center, working on them whenever i have an odd minute or two in the kitchen, that should help.

in fact, i’m even thinking of pulling them out after dinner each night to knit some rounds while we sit at the table for those few minutes after eating.

well, i think that’s all i have for today; i better see to a bit of catching up work before spinning class this evening. see you next time . . .

34 thoughts on “wednesday is hump day”