with no work from my day job this weekend, i made plans on friday to knit ALL weekend long. ahhh . . . it would be great. i pictured all the catching up i would do.

well, i have done some (coming, i promise), but i was hit with a reality check yesterday morning.

(cue in music from psycho here) 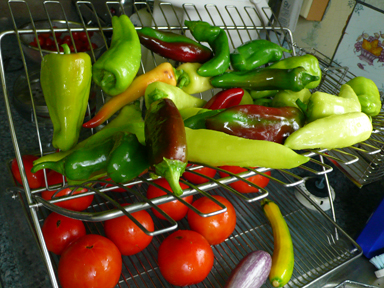 an overabundance of produce staring me straight in the face. i tried to deny it by running out to the porch to knit and relax. i sat down and started my swatching (tell you about that in a minute). i reached for my iced coffee (now aspartame free, thanks to prodding from juno) but what do i see on the table? 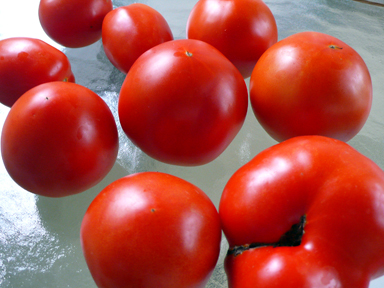 i ran to the fridge to get a snack and avoid the truth (that’s what snacks are for, right??). searching for just the right thing i found 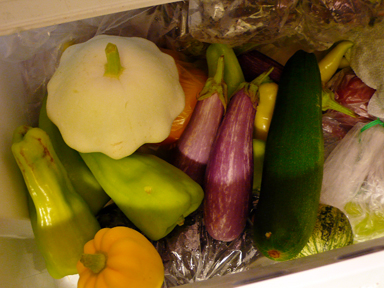 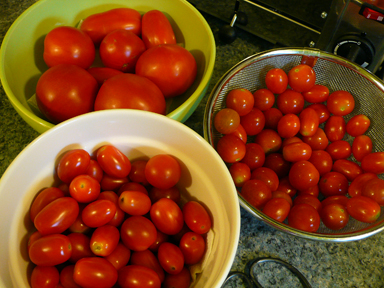 ok, okay. hint taken. like many working gardeners, i tend to pick stuff all week long for cooking, and leave most of it to ripen so i can “take care of it when i have free time”.
i am in complete denial that “free time” does not exist for me, and that even if there were any extra time, it would not be “free”. nor would i be “free” to use it any way i wanted.
there was no use for it but to get to work.

i spent most of the rest of the day in the kitchen and cleared away almost all the extra tomatoes, eggplant, and squash lying around. i dried two pans of pear tomatoes. i made a huge pot of ratatouille and put some of that along with tomato purée up in the freezer.
i took a quick nap and then made vegetable broth and a big batch of macaroni and cheese (i didn’t grow that in the garden, but it sounded good and the day was cool).

i still have peppers to stuff and bake, and greens to deal with, but i felt good about it.
til this morning 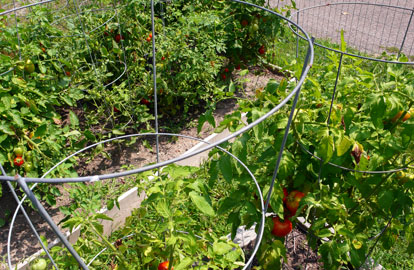 all these ripened since yesterday. i need a drink

mmmm. and it’s pretty too!

i have been plugging away on the second half of my honeybee stole and i think today i will get into the bee swarm section (that might be my favorite section—of course it is; it’s the smallest one . . . shoot). 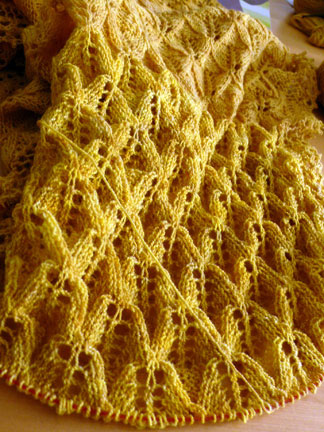 it has become a river of gold, a waterfall of honey goodness. it is luscious.

and i worked on the pattern for the big secret project in an effort to quell my nervousness about it. it’s a good-sized chunk of knitting and the yarn has not yet arrived. it has to be done in a couple of weeks. can you spell A-P-O-P-L-E-X-Y?

it’s not that i can’t get the knitting done. it’s the pattern i worry about. and all the stuff that has to go on hold for the marathon knitting. i’m trying to use my time wisely now to get a jump on non-knitting chores like cooking, pattern-writing, and preserving my sanity (what little there is left of it).

but still . . . yarn calls to me and my imagination never shuts down. now i have that red-speckled yarn from kim that has manLace written (dyed?) all over it and i have the BEST idea for it . . . which will have to wait a bit.

and then there is debbieKnitter, who is tired of knitting the japanese feather stole over and over, and wants a similarly pretty, fairly simple stole, with maybe one or two new skillbuilding features.

so i was like, yeah, let’s do it. i have some fearless fibers merino laceweight in a heartbreaking pinky-orange color that i have been anxious to see in a delicate-as-all-get-out stole. i have a stitch pattern i have been dying to use in something like this. let’s put it together real quick.
i swatched it 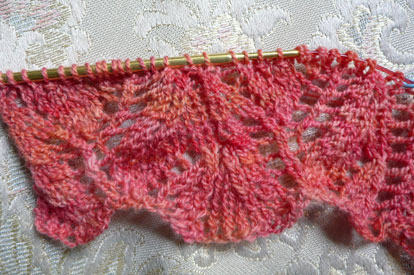 and love it. now i just have to find a pretty li’l edging and we’re done. simple simple simple. we can even do this in the slightly-heavier briar rose bamboo/merino i got the other day for a larger version. one pattern, two yarns, two sizes.
suh-weet.

now if only the big secret project was that easy . . .

46 thoughts on “has anyone seen my countertop?”