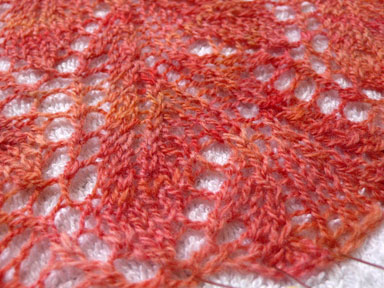 sorry about that . . the flowers for our yard are pretty much over. i think the only thing left to bloom out there are toad lilies, and they are gonna be a while. in fact, because i moved most of them to a new bed in june, we might not even get flowers.

there are days when the thought of the garden is so enticing, that it is all i can do not to drop everything and get out there to enjoy the sun. and then there are days when, despite all my best efforts to be stalwart, i am driven there. 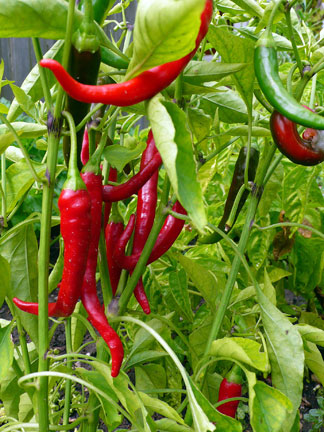 it’s not like i run out there screaming with my hands over my head because someone just cast the last straw. it’s more like i just have to, the way a sleepwalker does. sunday, for no particular reason was one of those days. i went out there to water, and then noticed that stuff needed to be picked, beds needed weeding, and the lettuce needed to be thinned. i didn’t have time, but was all too happy to stay outside a little longer in the quiet. 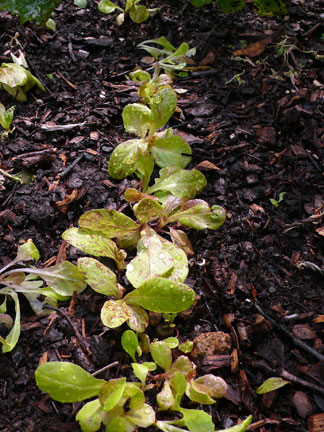 now i am a fairly thrifty person, but i’m also just curious. when it came time to thin the chard in may, i tried replanting the little culls in another spot to GRAND failure—every single one of them dropped dead about 5 minutes after i went back in the house. so i thought i’d try it again.
i just wanted to see if it was really a bad idea . . . or my technique.

so this time i did it a little different. i used more watering and i transplanted the culls with healthy plugs of the dirt around their roots, instead of pulling the plants out dirt-free. knock wood, but i think it’s working this time with the lettuce. 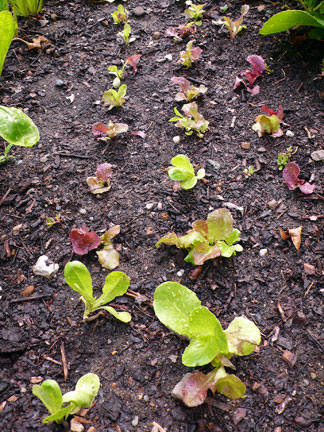 at least i don’t see any floppy, withered ones. keep your fingers crossed though (when you’re not knitting of course); they are still in danger.

produce is still being carted into the house faster than i can deal with it most days, but i figure if i do something each day, sooner or later i will catch up with it. 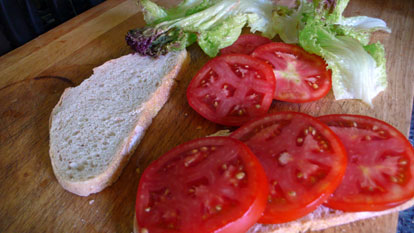 everything has its benefits.

well, my yarn arrived for the Big Secret Project, so i might be scarce for the next two weeks or so (but i’ll try really hard to be here). thankfully, work from our job is slowing to a trickle for a while, which is such a fortunate coincidence that i can’t help but marvel at the beauty of it.

so, not that i had any more free time yesterday than any other day, but i couldn’t help but be completely overtaken with the idea for that simple little stole i described the other day, once i started swatching it. plus, it really helps my anxiety levels to apply myself to a puzzle or a project. and this one had such a simple , clear direction, that i just went with it.
and let me tell you, i am in love. 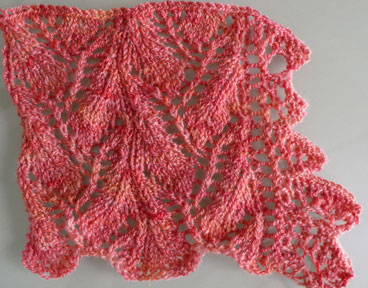 i have had my eye on this stitch pattern for ages and i just knew it would be über-pretty worked up. it hardly needs anything else, but i did add a little edging, with a delicateness that i can’t describe. 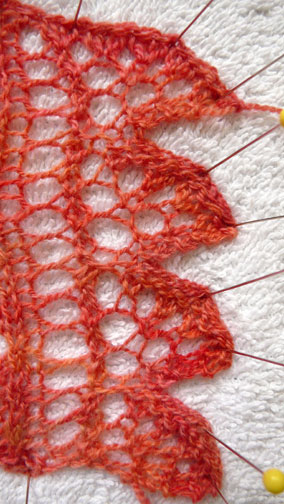 i love, love, LOVE the rustic crookedness of the meandering lines and the texture of the leaves which are sliced by double rows of simple decreases. i love it the same way i love the morning glory pattern—big and open-hearted love.

the yarn is deb’s merino laceweight (which is divine) in the rubicund colorway. i wasn’t sure if i should work it on size 6 or size 5 needles, so i did two swatches.

and guess what? they both block out to be the same width, even though i did not stretch them differently. the length on the size 6 swatch is a little different (and there are more rows in that swatch so it’s deceptive).

but get this—they feel different. i can’t explain this. they definitely look and feel different. the only thing i can think that might describe what is happening here is what stephanie always says: swatches lie.

now, i haven’t found that to be terribly true for me . . . i mean needles lie sometimes (they do SO); i have knit things with needles of differen brands that are “the same size” only to find that the gauge changes noticeably. but here we have something different. in fact, i don’t think these pieces are lying, even—no!—they’re being smart asses, that’s what.

i think i prefer the size 6 swatch a little more.

so all in a tizzy to feel closure on something, i wrote up the whole pattern and it just needs to be test knit. i like that.

this is a fairly simple, beginner-to-intermediate lace project. it is knit in two halves from hem to center back and grafted together. it has one main stitch pattern and a simple edge, that makes for a complete repeat of 16 rows. engaging rows . . . i thoroughly enjoy watching this vine pattern descend from the needles.

i might sneak this one onto my needles (even though i’m not supposed to be knitting this), and treat myself to a few rows of it now and then until the Big Secret Project is done. 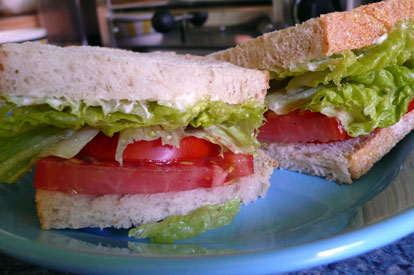 42 thoughts on “i couldn’t help myself”