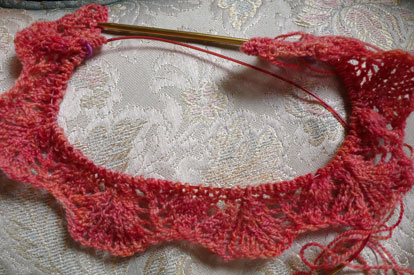 i know i said i wouldn’t (or that i shouldn’t), but i did and i know you knew that i would. i couldn’t help myself—just look at that fan-shaped bottom edge 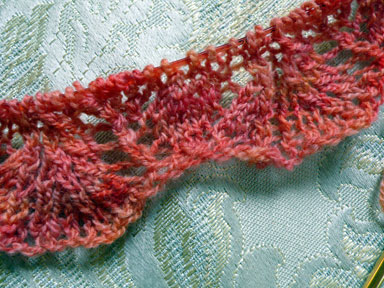 it looks like a parade of ginko leaves—probably my all-time favorite leaf shape. i can’t bear that four other people are knitting it and not me. so this is the deal i made myself: i will work on it in class only, where i need an easy knit so i can listen to questions and such, or when i am just too tired to think about the much more complex project i have going.

of course i also have this knit which i started in monday’s class. 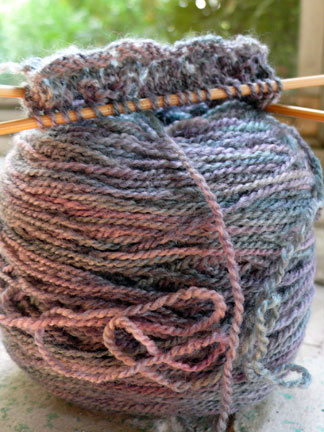 my shortie orchid mitts. you can see i did not get a lot done . . i had to rip back about 6 rows when i realized that i had started the chevron lace cuff in the wrong place. i was working from memory instead of reading the pattern. which has been known to bite me in the butt before, so why do i do it? just a lack of attention and/or discipline, i guess.

today i woke up to showers in the morning so i jumped out of bed, all happy that i might be able to knit, instead of watering, for the two hours before work.
ooops.

i forgot about the approximately 20 pounds of ripe tomatoes in the kitchen. so while the coffee perked, i got to work.
i put a huge pot of tomatoes on to cook for puree 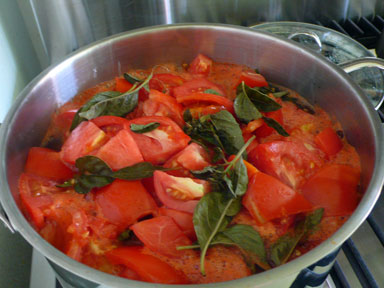 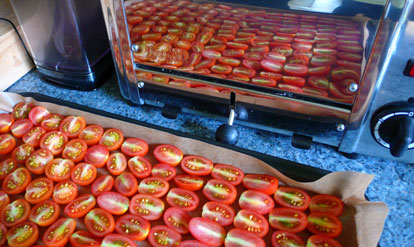 ok, maybe not a gazillion.
now, everyone always asks me how i dry the tomatoes. i got this idea from julia last year and it is the BEST cooking tip i’ve had in years.

see, we love to just stuff the freezer with as much summer produce as we can manage. but at some point we reach the limit. and drying is just a perfect space saver. just look at these pear tomatoes afterward 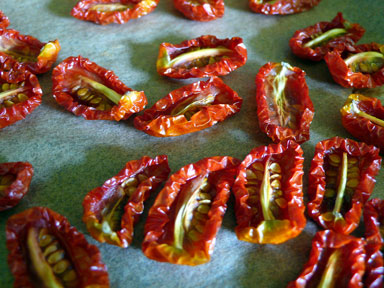 they shrink to at least half their size, and i can stuff them into zippered bags instead of bulky containers (if they make it that far . . i tend to eat them like candy, they are sooo good). but that’s NOT the best part.

the BEST part is that, when you take them out to throw a handful in a dish, the flavor hit they add is way, wa-a-ay, WAY beyond what the original animal could possible offer. i know what you are probably thinking . . . that i am straying toward exaggeration, right?

just try it yourself. here’s how:

i do a similar thing with the roma tomatoes to make a concentrate that i use as a paste in sauce. i find that the puree from my garden tomatoes, while delicious, tends to make a watery sauce unless it is cooked forever, which is not good for the other ingredients in our vegetarian sauces. and canned paste is awful. so i stumbled on this quick method for making my own—it’s a LOT less time consuming than cooking paste on the stove. 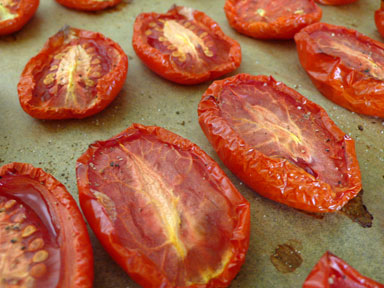 i use one 8-ounce container when i make a pot of sauce and it turns the sauce to just the right consistency—not too think or thin, and not too sweet.
i also use the concentrate for indian dishes where the somewhat-smoky intensity really contributes something special.

today was also a day of more arrivals. chris might have taken briar rose out of town for a show, but she still managed to send me more yarn. sigh. that woman . . . if you think that I’M an enabler, lemme tell you: i got nuthin’ on that one.

this is her newest yarn, a bamboo/merino blend in DK weight that she calls celebration. 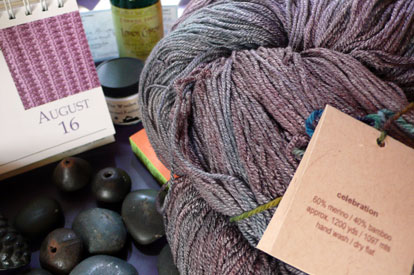 now, where was i?

oh yes, and then a package came from judy, too. now, i know how this appears, but believe me, this is different. it IS.
judy and i have been trying to hook up to do a project together since we met at rhinebeck last year. a year. we have tossed the idea around a few times but never acted on it for one reason or another.

but finally, FINALLY, we are going to do it. er, well in a couple of months we are. first i have to get the BSP out of the way as well as a few other smaller commitments. but come late october and i will be ready to dive into this: 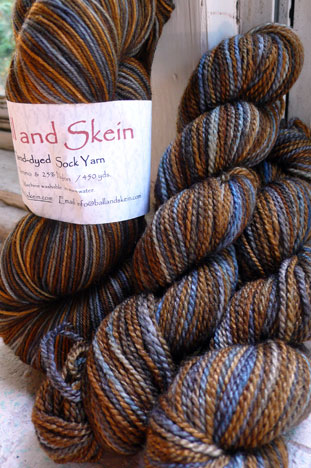 on the left is judy’s sock yarn and on the right is her own merino/silk artisan blend which is custom spun for her shop alone from her fiber blends and specifications. let’s just look a bit closer at that scrumptious, chubby-cheeked stuff 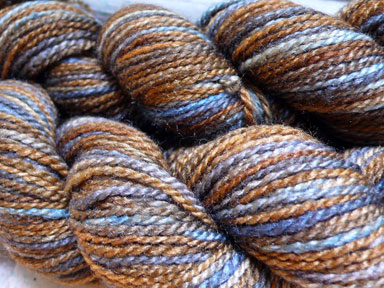 the colorway for both is end of winter—ok, everybody together now—O.M.G.
we are SO going to be working with that yarn later in the fall. it has manSomething written all over it. i love that she really got the color of earth going on in there; mmm-mm. 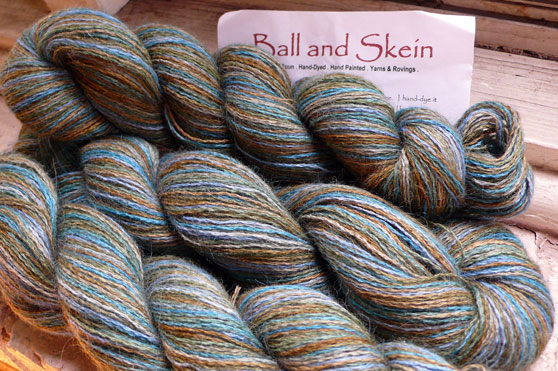 it really captures the feeling of the ocean in winter . .

ok, now, i’m feeling a little flushed and overexcited after all that. i think need to go sit with my knitting and calm down a bit.