i have some serious knit-envy going on.

i love my current project(s) . . . all of which are lace (more on the current projects later). i know a lot of people think of me as a “lace knitter” or “lace designer”. and i am.
since i started blogging, the focus of my knitting and designing has been heavily weighted toward lace; it is a fascinating, mesmerizing kind of knitting. which might lead some people to think i am a fanatic who only knits lace (as opposed to them thinking i am just a crazy lady, which is ok).

but the lace thing is a phase; a stopover in a cycle. i have other knitting lives. i know i’ve kept them hidden from the blog for the most part (there is only so much knitting time in the day, week, or year, after all). but—newsflash—i knit sweaters too. 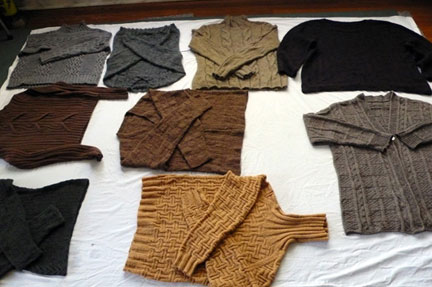 and that’s only a few of the handknit ones we own. in fact, i love knitting sweaters, and i sometimes feel a bit grumpy that they cannot be more a of a priority right now. since i am relying on lace for part of my living, sweater knitting has to take a backseat for a while.
but believe me, sweaters will have their turn too (i almost don’t even want to contemplate the firestorm that could occur when the worm turns; i’ve been known to turn out a couple of sweaters a month in some years . . . and they are real stash-reducers too, which is not lost on me).

as we head into fall and the air cools i have a growing yearning to cast on some DK-weight yarn for a sweater . . . or three. maybe even a cozy worsted-weight one. heck, i’d settle for finishing the two that i have on the needles since last year (both very desirable to me—why am i not finishing them??). other bloggers are starting to talk about the ones they are making to wear to rhinebeck and i am very jealous—now i want one, too.

i know i can bring this one, which is new since the last rhinebeck

but that’s not the same as having a new one FOR rhinebeck. maybe debbieKnitter will make me one . . . what do all of you do about project envy? (uh, besides the obvious—casting on for something new.)

if only there were two of me. i think i could handle it. overseeing two different sets of knitting projects. one of me could continue with all these lace projects and patterns, and the other one could make us some sweaters. and maybe even some sweater patterns. wouldn’t that be great?

well, we’ll see. i have a big deadline at the end of this week (BSP, which is why i was absent most of last week) that i’m knitting toward now. it’s a nail-biter for sure, and it will come right down to the very wire. i have been knitting every day on it—when i haven’t been working on the pattern. over the last two days, when i did not have work or internet service, i put in huge knitting hours. i have not knit this much ins this amount of time since forever (and i’m totally loving it).

i’m more than halfway there; i’m feeling good, but i’ll feel better after the three-quarter mark. if i finish the knitting by tuesday i will be absolutely ecstatic—that means i can block it and mail it by friday, and skip around all the long weekend without a care.
he-he, well, not really . . i still have a couple of socks i need to finish for the next deadline, but at least i will be able to sleep at night.

i thought i would grow to hate this piece—the fact that it is on a super-tight deadline, that i would have to be monogamous, and that the yarn is a bit difficult did not bode well initially. in fact, i could almost say i hated the damn thing last weekend at this time. earlier this week i was stressed about it to the point that i was in anxiety-attack mode for a few days straight. i wasn’t working on it enough between work, business, and teaching.

but now that i have clocked some solid work hours on it, the deadline is incentive and i’m enjoying the challenge (i can’t believe i’m saying this). of course i have dropped almost everything else and sequestered myself in a knitting cocoon. a person can’t do that all the time.

i have taken breaks to cook . . . the garden does not stop producing because i am busy. yesterday i finally got completely on top of the produce that was inside the house. i cooked and dried tomatoes, and made a huge batch of our family’s stuffed peppers