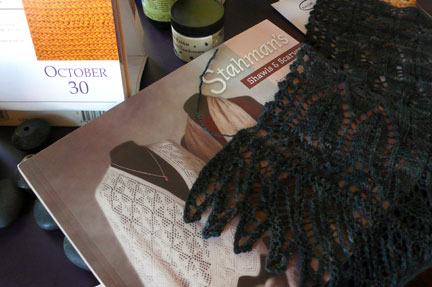 some things just don’t come easy. and then . . . some do.
when tina approached me about doing a design for her new series of raven colorways, i could see it was a little of both.

on the one hand, here was an opportunity that came knocking, yarn in hand, with the basic concept already narrowed down a bit. on the other hand, to have this (big) design idea inserted into my brain half-formed was new for me, along with the feeling that, for myself, i just couldn’t say no (who would say no??). 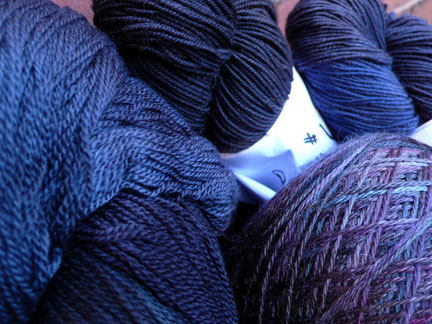 how then, to embrace the idea of this raven shawl, filter it through my own creative process, and come up with something wonderful on a fairly short (for me) timeline?

until you realize you might give yourself a stroke and never knit again. or worse, that you’ll die of anxiety and your stash will be donated to the girl scouts (i will haunt david if this happens and he knows it).

i kinda didn’t do anything but think about it for a week or so. it was still summer, and i spent a lot of time sitting out in the dark, in the yard, waiting for a visualization of what the shawl would look like. honestly, all i kept seeing was a big bird shaped thing that more resembled a kite than a shawl.

i wanted to see something weightless, pretty, something with movement, and mystery—but i didn’t want to see a big fat bird. i can’t help it . . i’ve always had an aversion to knits that are about themselves more than the body that gives them shape. i like a nice marriage there.

for someone who has a painting background, and tons of arty sketchbooks laying around, i am no good at using sketches for my design work . . the best i can do is the doodle-sketch 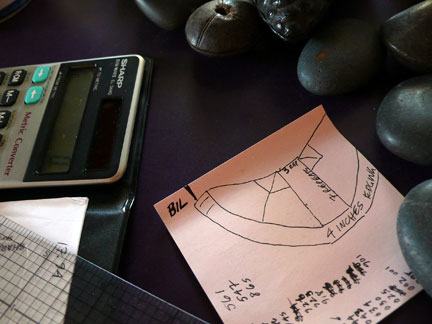 . . . on a genuine sticky note to boot. pretty pathetic, right? but it works for what i need—i do a lot of the work through charting on the computer, and sticky notes are always so handily nearby. somehow working with the symbols makes it easier for me to see the overall layout of patterns and stitches.
and as for a shape, i decided this was the project for which i would go faroese.
BUT
i know how you all feel about rectangles so i am seriously considering doing both. in fact, i have pretty much decided i will.

in october, i received my yarn, so i decided i should start swatching . . . 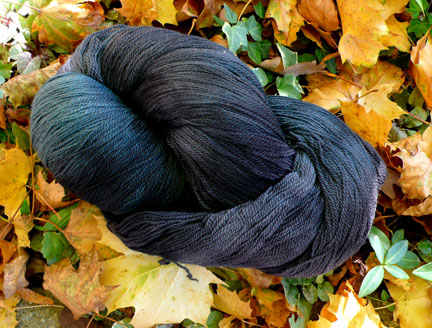 maybe that would help pull things together. so i left the concept part simmering while i looked at stitch books.
BTW, this yarn is impossible for me to photograph, so you will see lots of variation in the photos over the next few weeks. the best photo i have of the color is that first one. it’s very dark, richly-colored yarn with greens and purples and blues that reveal themselves. it’s so dark that the camera constantly lightens and fades it (and i am so utterly NOT in command of my camera when it comes to this . . maybe david can teach me something).

i thought that choosing stitches would be the easy part—there are tons of feather-like patterns out there right?
HAHAHAHA!

actually there are.
but they all run in the wrong direction; i needed to work top-down on this piece rather than hem-up, and i needed patterns that run in the opposite direction so that the feathers point to the hem. there are virtually none of those.
i am not exaggerating when i say that i looked at hundreds of possibilities, tried out about 25 of them, then discarded all but three. plus two edgings. 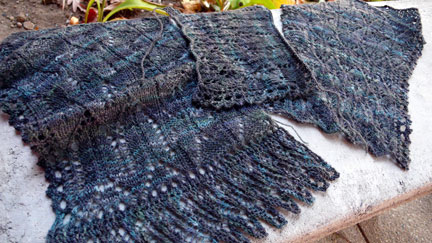 that’s a lotta swatching. these are the keeper swatches, i.e., the ones that did not go to the frog pond (there were many).

now i know that you know that i love swatching. can i tell you a secret?
swatching for a new design is frustrating and worrisome and it keeps me up at night—and i love it.
how sick is that?? 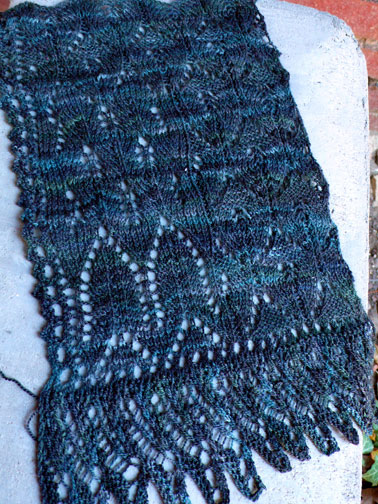 i just couldn’t swatch any more though . . . and i had all i needed.

i know. you can’t really tell anything from this swatch right? don’t worry, i’m going to explain.

first of all let’s talk about the bad swatch. why don’t i like that one?
well, first of all i DO like part of it. i like the top half—this bit here 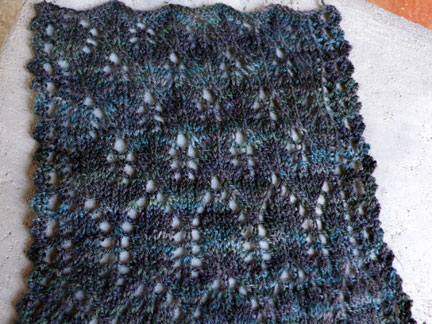 this is the combination of stitches that will make up the largest areas of the shawl. i love the scale—in the good swatch i used the same stitches but i tried to enlarge them by adding a couple of rows and i didn’t like the result. here the pattern has more stitch definition and that diagonal line that cuts across the edges of overlapping feathers is much stronger when the pattern is smaller.
since that line provides the overall movement component that i am looking for, it’s important that it be somewhat crisp, though not overpowering.

the bad part of this swatch is that the progression of patterns is all wrong. 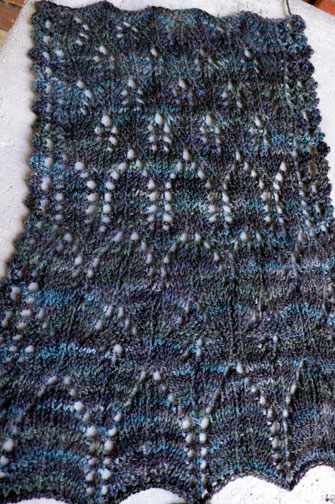 could i actually flip that around and have it succeed? 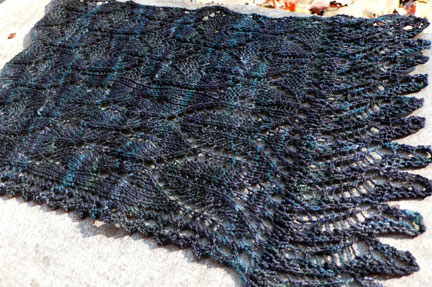 i switched the largest motif to the top shoulder area, and used it also for the back panel which will run straight from neck to hem. mu-u-uch better. then i ruined that swatch by enlarging the field patterns.
trust me, it will look TONS better with smaller field motifs—a series of smaller overlapping “feathers” cascading from underneath the shoulder ruff of large “feathers” (but i swear it’s not a bird, it’s a shawl).

i was getting excited . . the feeling was pulling together totally for me now. it is lace AND it’s bird-ish.

let’s look at the edgings. along the front and top neck edge i used—just guess—bird‘s eye edging. it’s crisp, simple-to-do, and works well with lots of body patterns because of its four-row repeat. then for the hem, i chose to work with an applied edge. 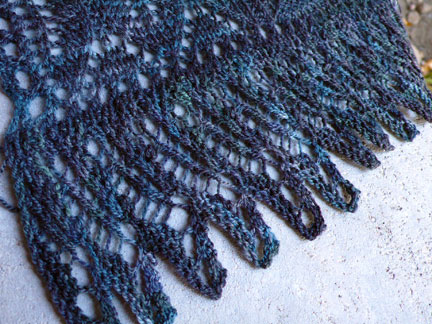 this one is SO worth the work. it looks JUST like flight feathers (check out this photo here and tell me this is the wrong edging). 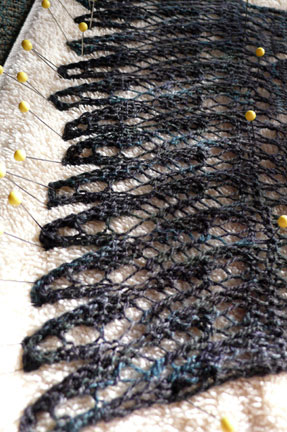 so that settled everything . . . i started knitting and am partway through it already. so far so good. i haven’t run into any big roadblocks yet. i have working charts that i’m knitting from and correcting as i go; hopefully i’ll have a working pattern soon for the test knitters. and a rectangle pattern to follow.
next time i talk about it i’ll flesh out some of the structural details for you. it is good to be working with a new shape. and on a whole new venture.

let’s have a little peek at what the end might bring . . . 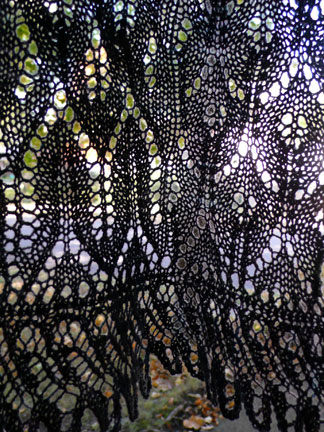 85 thoughts on “a good long think about it”