i know you’ve been wondering why i’m holding out on you. you’ve been dying to see THAT photo and i haven’t shown it yet. but this season i waited til the setting was absolutely finished and perfect before i took it for you. and you will not be disappointed.

anyway, i give you 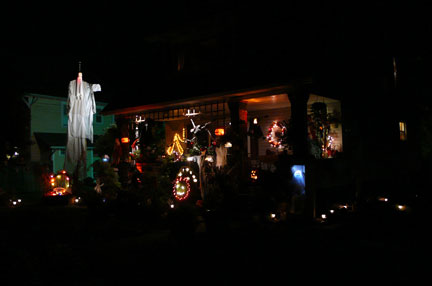 our neighbor has truly outdone himself this time; just look at that ghostly skeleton up on the flagpole. trust me, that took several days of outdoor work and many buckets of flour-and-water paste. i got to watch it from my office window. let’s walk in for a closer view (though even at that, you won’t get the benefit of the flashing lights and the flying bats powered by remote battery packs. 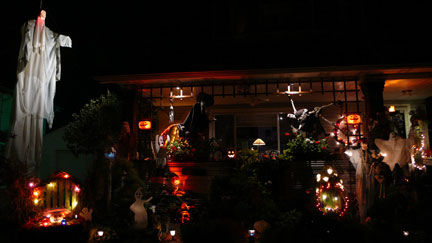 It’s Halloween, one of the oldest holidays in the Western European tradition, invented by the Celts, who believed Halloween was the day of the year when spirits, ghosts, faeries, and goblins walked the earth. The tradition of dressing up and getting candy probably started with the Celts as well. Historians believe that they dressed up as ghost and goblins to scare away the spirits, and they would put food and wine on their doorstep for the spirits of family members who had come back to visit the home.

Pope Gregory III turned Halloween into a Christian holiday in the eighth century, and people were encouraged to dress up as saints and give food to the poor. But when Irish Catholics brought the Celtic traditions to the United States, Halloween became a holiday for them to let off steam by pulling pranks, hoisting wagons onto barn roofs, releasing cows from their pastures, and committing all kinds of mischief involving outhouses. Treats evolved as a way to bribe the vandals and protect homes.

It wasn’t until the early 20th century that Halloween became a holiday for children. In 1920, the Ladies’ Home Journal made the first known reference to children going door to door for candy, and by the 1950s it was a universal practice in this country. By the end of the 20th century, 92 percent of America’s children were trick-or-treating. Tonight, about 70 percent of American households will open their doors and offer candy to children, and Halloween parties are becoming increasingly popular among adults. It’s the one day a year that people can freely dress as the opposite gender, as criminals, superheroes, celebrities, animals, or even inanimate objects. But retailers report that the most popular costumes remain some variation on witches, ghosts, and devils.

14 thoughts on “tricks or treats”