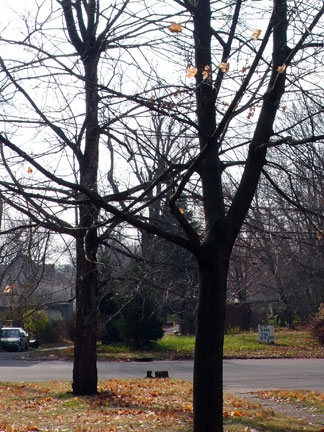 when we arrived home sunday this is what remained of that glorious gold foliage which served as the backdrop for our photo shoot just 7 days earlier.

it’s just like the theater . . . once the scenery is gone and the house has emptied, you wonder if you really saw what you saw.

i have so much to talk about that i already know i can’t fit it all in one post. i wanted to write yesterday, but i had classes, a server breakdown (can i just say one more time that joe is a genius AND my hero?), orders to print, and loads of office-ey tasks to catch up on (i’d rather be talking about knitting, but such is life).
even my knitting was stalled yesterday for the most part, though i did get some done late last night.

we had a great trip east—i didn’t take nearly enough pictures, but maybe next time i’ll feel more comfortable with that. i especially wanted to share a beautiful old cemetery that we visited on friday, where much of my extended family is buried. but it was bitter cold, so we just tended the graves we came to visit and did not walk around much.

albany is a very old city—in fact, the first dutch settlement in america, during the early 1600s. this cemetery was opened in the mid-1800s, but graves from an even older burial ground downtown were moved to this spot at that time. so it’s very cool; when you enter the long, iron-fenced drive, between rows of tall trees, the first lots near the entrance have the oldest stones and monuments. various paths wind into the deep, narrow property, and up the hillside.
it’s sooo beautiful. some time i will get photos there.

so, let’s start with simurgh, shall we?
i am all done with the first half of my stole. 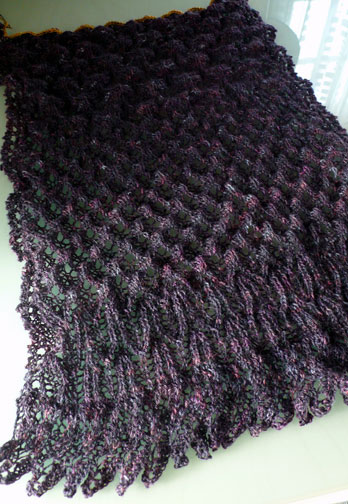 it’s looking good, but i have some decisions to make. the test knitters and i are all knitting different versions, some not even in the pattern (hey—change is good). jocelyn is knitting the straight petite size in the geisha yarn, colorway, shadow (same yarn as me). hers is coming out a little narrower than i thought (which makes me nervous), but it’s not blocked yet, and silk grows a lot, so we are waiting to see what the finished size will be.

it’s a good question though: how petite do you like a petite size to be in length and width? i mean, if i’m going to offer sizes they should be right—right?? is 21 inches too wide for petite, or 18 inches too narrow? and what about the length? tall people should vote too; i am all ears . . . 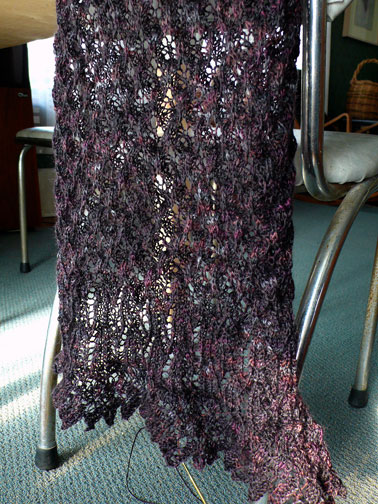 i am knitting the tall width and the petite length (i know—i can’t even follow my own pattern as written). but i’m doing it for a reason.
oh. no—i’m doing it for two reasons.

so i split my yarn in half and started the first stole half with the slightly smaller ball. now i’m done and i can see that indeed, i can knit half the stole with half a skein of geisha 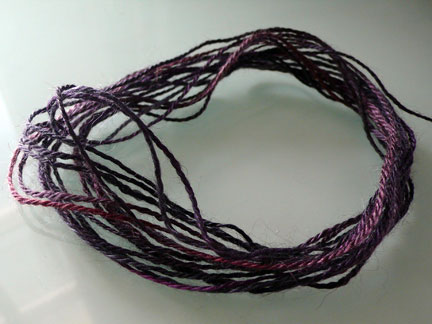 and still have some left over. hehe. ok, not much.
which means you’d better knit REALLY close to my gauge, or tighter, to make a similar hybrid.
but you could do it.

we’ll see when the final blocking is done whether i will need to adjust the width in the pattern.

meanwhile, rachael has been quietly and diligently working away on another version of the stole. she is knitting the tall size with the laci merino yarn in thraven on a smaller needle. my prediction was that if you prefer laci, you could knit a petite stole using the tall instructions and the lighter yarn. you know, just to give you options.
however, what rachael is finding is that her stole is somewhere in between . . not as big as the tall would be in geisha, but not as small as the petite in geisha. interesting; doesn’t meet my predictions, but all good info for those who looove substituting yarn. 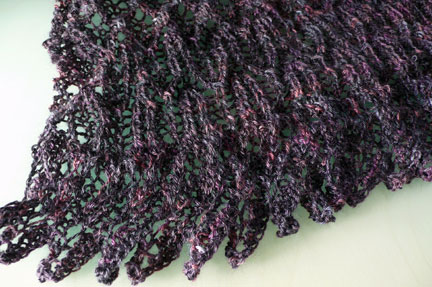 i still adore with the edging, both knitting it and looking at it . . . and it’s even longer in geisha.
i want to block this first half to see what i end up with, but i also want to get it right back on the needles and knit to the finish so we can do another full photo shoot with it.

and check this out, dudes—remember my good friend nan, who test knit irtfa’a (her first faroese shawl)?
i swear, this is true: she cast off the last bit of edging and do you know what she did then?
she cast on for a second irtfa’a, because she liked making the first one so much.

of course, i also feel a bit of a tug to cast on for another faroese. hmmm, we’ll see. i have to dig through my goodie box and see what yarn in the queue needs to be shown off.

(oh wow. the mail carrier just dropped off the mail they were holding at the post office when we were gone. hmm. after telling rachel that 80 percent of our packages are for david, today i see that 100 percent are for me. and they are all soft and squishy, except for the books. looks like tomorrow we should all bring drool rags.)

now, let’s talk about some more knitting in progress (seriosuly, there is so much to talk about; i hope i have time to blog every day this week.).
the geese wrap is also getting very close to half-done. in fact i can tell you the name: oh! canada. 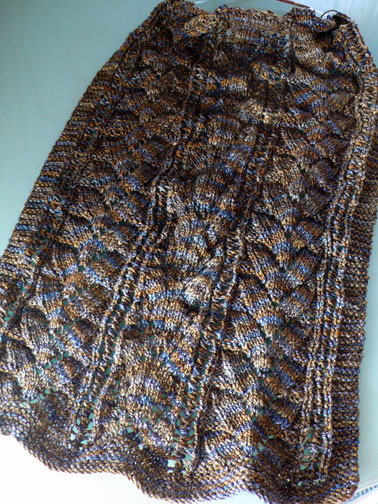 it makes great car knitting both going and coming, and i found it also makes a great piece to take along to class. i can pretty much knit it without looking, and it feels so good i don’t want to put it down. 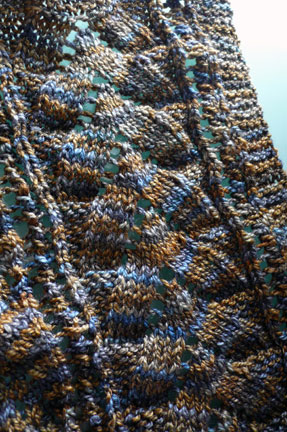 that photo is for jessica—she’ll know why . . .

and now for something really special. i told you i was working a bee sock right? in response to a special request from our lovely friend kim from the woolen rabbit.

kim has a beautiful new hi-twist merino sock yarn and she sent me some in her tupelo gold colorway with a plea to create a bee sock.

now, if you’ve not been feeling your usual queen bee mojo lately, and are in need a little pick-me-up; you know, something to wear with those peter fox mules, when you need a dose of “specialness”, then i think i might have the sock for you. 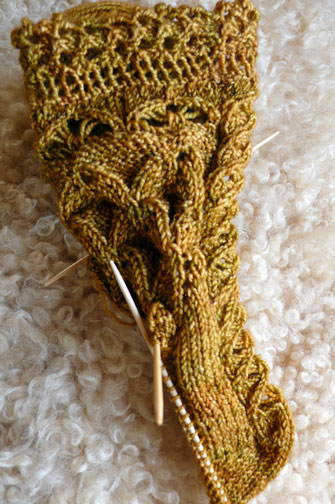 i know they’re ornate, but don’t they appeal to that teeny weeny little liberace streak we all have somewhere inside us (he had peter fox mules; i’m sure of it)?

i never really intended to go this route with them, but i was foundering around for a cohesive sock design (it’s harder than you think to morph a shawl into a sock), and i finally just started. i decided the socks could design themselves, and you know what? they are.

ok, and secondly (as if being queen weren’t enough), if you like a little touch of gold on your ba-a-ad queenly self—as in 24k-jewelry-gold, then this is the color for you.
do these socks not look like they are carved from a hunk of the stuff? 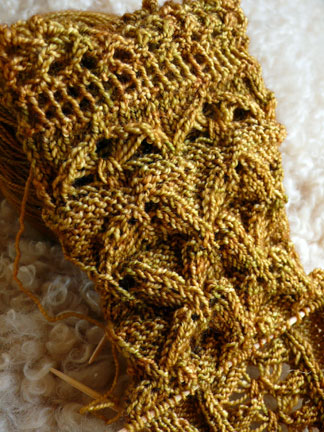 let’s take a peek at the back of the heel (i know kim is wriggling in her seat right now and i don’t want to make her wait any longer. 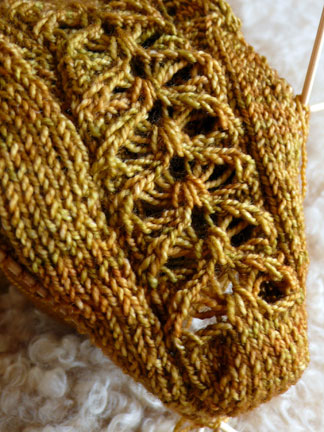 now, you wouldn’t have to add bees all the way down to the heel as i did here (but you would if you were answering to your inner liberace . . . or queen bee).

and i have a name for this one too—it just occurred to me this morning.
since the bee is the symbol of royalty, let’s call them marie antoinette.
(she didn’t have peter fox mules—she invented them).