lace is everywhere.
these ghostly leaf shadows left behind by wet, molding oak leaves are not only beautiful, but the kind of imprint my brain obsesses over when i think about lace scarves.

a little while back i was rattling on here about doing a series of “little nothings”—lace scarves that look as if they could be torn from the remaining good parts of a lace curtain or coverlet, with almost-raggedy edges, and knit in the lightest of fabrics.

sometimes these sorts of ideas vanish quickly and i never think about them again, but this one sticks, and actually, has been nagging at me. not only that, but forces from outside myself are feeding it. first, deb from fearless fibers wrote and suggested that a new yarn she is dying might be perfect for one.

it’s a beautiful alpaca laceweight that is really, really soft. and um, she just happens to have it in a colorway called green thumb, would i like to sample it? 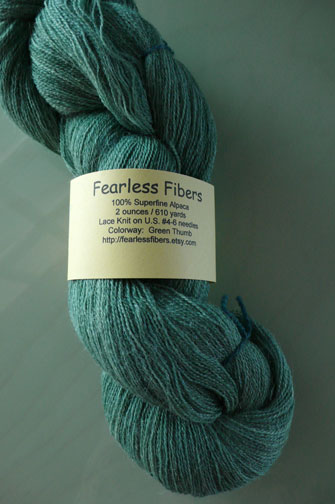 hehehe. would i.
(the reverie color also tugged my heartstrings, but in the end, green thumb won out). if you love a fine laceweight, this is a beautiful example—it’s not cobweb, but it certainly is lightweight and will knit up into something positively gossamer.
it would be perfect for a sheer scarf.

and then, when we did our photoshoot for irtfa’a, and i did not have a turtleneck in off-white, i grabbed a little scarf at the last minute to wrap around my neck. 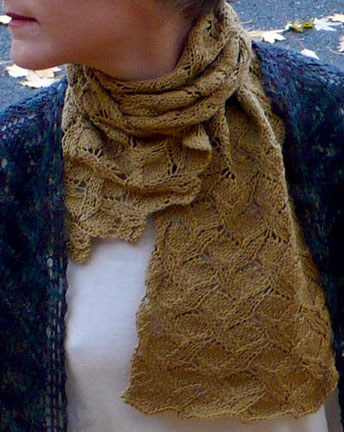 (really, i was just trying to hide the fact that i’d gotten mascara on my old cream wool undershirt)
and i couldn’t believe how many inquiries i received about that little nothing.

about six or seven years ago, when i still worked in a corporate office and commuted daily by train or bus, i bought an extremely expensive black cashmere coat. in the city, i needed something long and warm for walking to the train (over a mile away) or waiting for the bus (let’s face it; could be an hour some days).

(since moving to ohio, i’ve only had a few occasions to wear this beautiful coat; mostly to funerals, but i know it will last a lifetime)

anyway, i was pretty proud of this purchase and i wanted a little scarf to show off the neckline. i had 2 balls of K1C2 richesse in butterscotch burning a hole in my stash. not only that, but the yarn was an exact match for a little leather purse i also owned (so sad—i actually have a very nice work wardrobe, but no place to wear it). 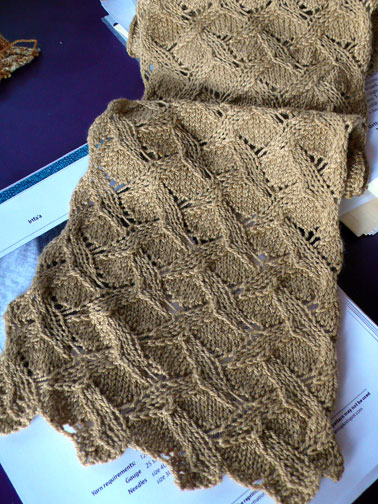 recognize it? i remember i had to restart it several times because i flirted with a few edgings, then finally decided the best thing was to just knit it in the one stitch and let the edges do what they will. 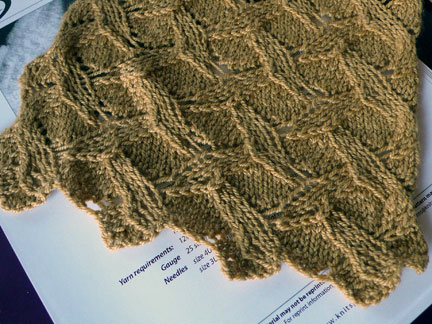 and the payoff was exactly what i wanted . . a little rustic, a little raggedy, and plenty of contrast to the smooth, rich black fabric of the coat.

and its simple; i just grab it when i need a little extra something at my neck and i’m good. no draping or elaborate wrapping, no long ends—it’s small enough that i could tuck it into my purse or pocket if i don’t need it, and light enough to wear inside a cardigan in place of a blouse.

so i’m going to type up a pattern for it and this will be the first in the little nothings series.
this is the kind of project i used knit while commuting; always a good conversation starter with seatmates. since i don’t commute that way any more, this kind of knitting has fallen by the wayside, but i think it’s time to revisit it.

now that my instinct is prodded though, all i can think about are these scarves. i have so may single skeins of lace- and fingering-weight yarn that would be perfect. or, if not single skeins, amounts that cannot be knit into anything more substantial.

perfect for necklines or to keep the draft off or for a nice little gift, they will make good on-the-go projects if one is tired of socks. once the two wraps are done and off my desk, i think i will start on this series; they won’t be priority pieces by any means—just a nice little side activity, and you’ll see a finished one with a pattern now and again.

yesterday, the post office dropped off a big box of mail and packages that had been held while we were away. there were five packages in it for me—five.

this must be the season when dyers everywhere are exploring new fibers and experimenting with additions for their lines. and wow—there are some great new offerings.

deb’s (above) is just one among several that have arrived from our wonderful dyeing friends.

anne has something really special right now, too. an incredibly soft artisan yarn spun just for her by her local mill, in 90/10 cormo/angora. 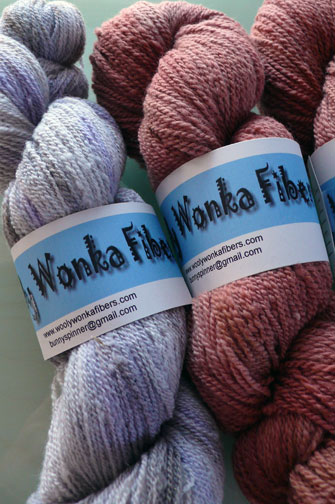 just look at that chubby, squooshy stuff. the texture is awesome; being millspun in small quantities from anne’s own fiber blend gives it an almost-handspun feel.
it comes in both laceweight and sportweight; the colorways pictured are: left, laceweight in wasatch; and right, sportweight in red rock.

again, the laceweight will be a wonderful choice for a little wisp of a neck thing.

ok, i think we need a little break from the yarn to cool down a bit. let’s look at what came from rachel. she and joe recently arrived home from a month in israel, and rachel brought me a few gifts from there

chocolate and spices . . . . how much do we love her? and of course, something sheepy. that little varmint was created by an artist in the market where rachel shopped; maybe it’s not exactly anatomically correct, but it’s cute.

the chocolate is divine BTW, and the spices are ones i don’t have but they smell extraordinary and i can’t wait to try them. i’m thinking indian food, though i know rachel uses them for soups and such.

i think i mentioned a while back too that the next big shawl project, which i will start in a couple of weeks will be a shawl with snow motifs . . . sort-of like the snow on cedars mitts, but more and bigger, and hopefully, with an interesting twist (if i can work that out; testing will be needed).

the yarn for it is from michelle at the sweet sheep wool shoppe, who has been playing with several dye options for “snow” yarn.

i love this one

doesn’t it look just like a snowscape at dusk? or the inside of a snowbank?

i can’t wait to see what it does in swatches—i have a good feeling about how it will streak. and working with this pale yarn in the dead light of the darkest months will be a real pleasure.
(michelle also has great yarns at her site for all sorts of lovely gift knitting; i am not allowing myself to delve too deeply over there, but if i needed something? that’s one place i would search.)

this last ball of wonderfulness is a gift from chris so that i can knit a sweater. it’s the newest fiber addition to her incredible line of yarns. it’s 100 percent BFL (blue-faced leicester) and it is offered in three weights.

here we have (i think) DK weight which is called Glory Days, in a custom colorway that chris dyed with colors of my choice. 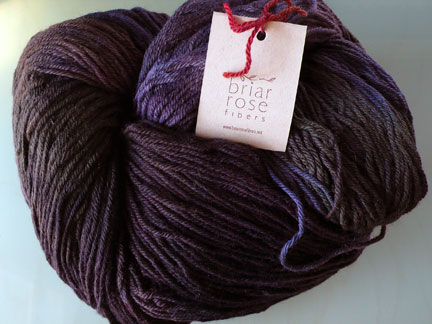 gimme plum, baby.
and anything else that “goes”. there is lots of yardage here, and the fiber takes dye with an intensity that reminds me of her Abundance yarn. yet another gorgeous single-breed yarn in her collection.

the bulky version will be called Robusta, and there is a worsted singles called Pilgrim, so look for these soon at the briar rose site.

now tomorrow we need to have a serious talk about . . .AHHHGGHH . . . christmas knitting.
you would be correct in assuming that, since i haven’t mentioned holiday knitting at all, i haven’t started any.
so, as usual, i am way behind.

in the meantime remember: 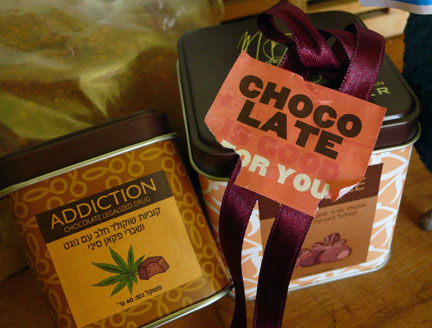 chocolate is good for you.