(sshhh—don’t tell erica, but i’m sneaking this post in early on sunday morning before she gets up. it’s a working weekend for us here, but being up before anyone else means that i have a free zone of time to do what i want, right??)

ok, i wasn’t going to blog about the garden or flowering trees or spring today, but i can’t help myself—just look at what i glimpsed from the kitchen window on this chilly, drizzly, march morning 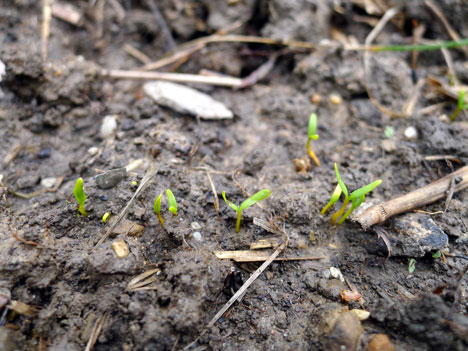 and yellow ones—YAY. almost everything i threw at my little greens patch last sunday has germinated and i think the rest will come in the next couple of days.

i know what you’re saying, too—how the heck did she even see those little mites all the way from the kitchen window, blind as she is???

it’s true that my eyesight for task work has gone to ruin, but my distance vision is still sharp enough apparently to detect a haze of bright green on the brown patch i’ve been studying all week for signs of life.

not only that, but david was out there raking around yesterday and when i turned my eyes to the rest of the garden, i saw he’d uncovered this 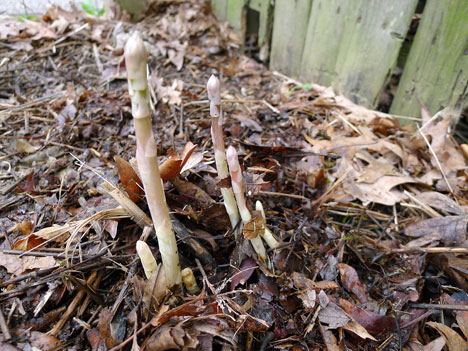 and purple ones too

not only that, we also have quite a few white ones 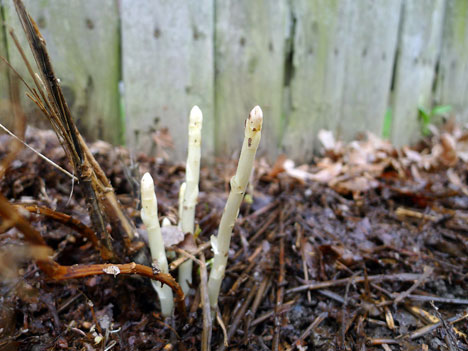 they are really all green and purple at heart; these are white because they’ve been buried under such a deep layer of mulch (maybe twelve to fourteen inches?). we could cut them right now and eat them as white for a milder flavor. i’m not sure if they’ll turn green now that they are exposed; i’m reading up on it and i see lots of info about how to produce white spears, but none on whether they’ll change color after sprouting as white. my guess would be that the sun will bring out their color. we’ll know in a few days, right?

ok, now we can talk about other stuff.

as i mentioned in the last post, erica is here to work and we’ve been hitting the books pretty hard. our main goal this weekend is to get our 2012 fall in full club organized—yes, can you believe it? signups are coming up soon in may (we’ll be sure to let you know when the info is posted; keep an eye on our FIFC ravelry group in the meantime).

we’re looking at a dizzying number of yarns, colorways, websites, and emails to pull together all the puzzle parts that make up a beautiful club palette. we still have a lot to do today and tomorrow, but we’re getting there. 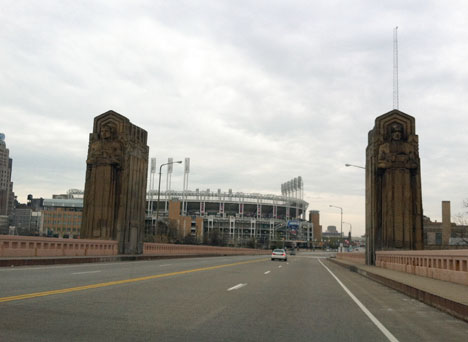 and when the yarn fumes get to be too much, we take a little break. yesterday morning, for instance, we shot up to cleveland in the new volt to show erica the west side market. that is, we shot up after spending 30 minutes in the driveway figuring out how to work the navigation system, haha; we crack ourselves up sometimes . . .

on the other hand, we’ve had the car for two weeks and we only used gasoline for the first time on friday—that makes ME happy.

doesn’t erica look fabulous? the baby is the size of a sweet potato now. 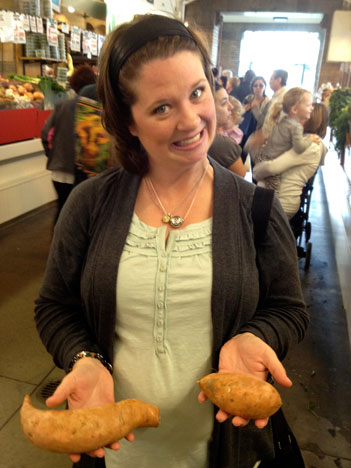 when i casually mentioned that my friend jeff grows sweet potatoes that are the size of footballs, she blanched just a little; sure enough, we saw some big ones at the market. 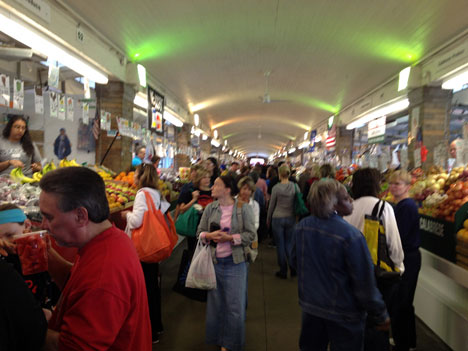 we spent about an hour shopping the aisles, starting with the outer perimeter of produce vendors. we bought a few things for dinner and then headed inside. 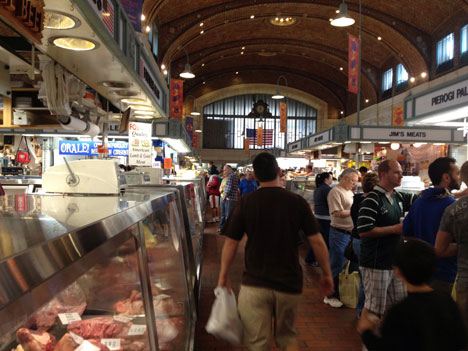 the place was packed. i didn’t really need a lot; we were there mostly for the people watching and to immerse ourselves in happy, foody surroundings—something completely different from my study. 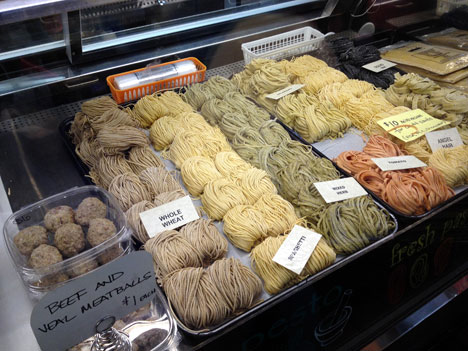 the fresh pasta booth was a real draw for the photo op; the owners create such a pretty display—as beautiful as the pastry shops do 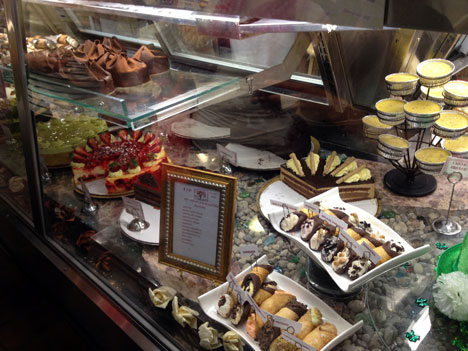 speaking of which, we did indulge ourselves at royale

though the cheesecake looked divine, we went for chocolate desserts (erica is posting the spoils somewhere). we ate those for a midnight snack while we watched a movie.

i loaded up on breads from mediterra bakehouse, my favorite regional bread bakery; i brought home bagels, ciabatta, paesano, and my favorite—semolina bread coated with sesame seeds. 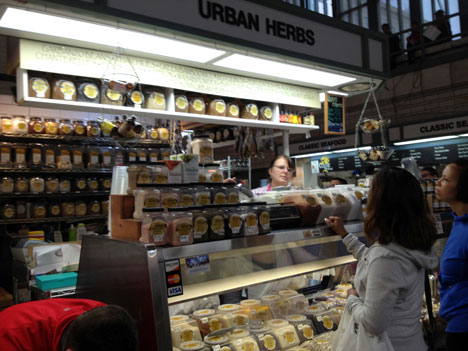 my favorite salt vendor was on vacation, so we perused the urban herbs stall instead. 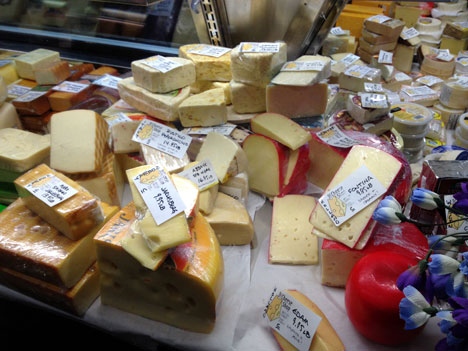 there are several wonderful cheese mongers, but they were so busy that i didn’t stop; i really just wanted a little chunk of manchego and i can wait on that. 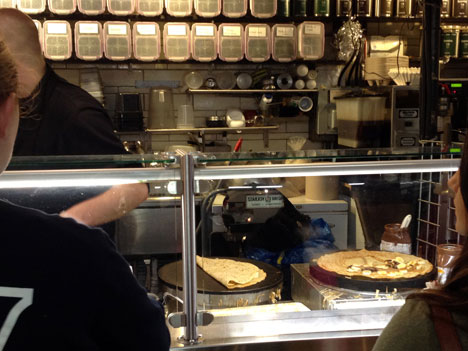 lastly we went to watch the show at the creperie stall 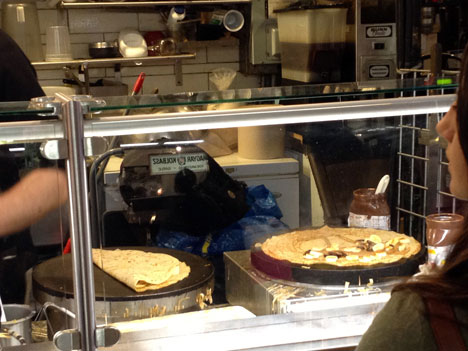 where the vendor was putting together a peanutbutter/banana concoction for someone. 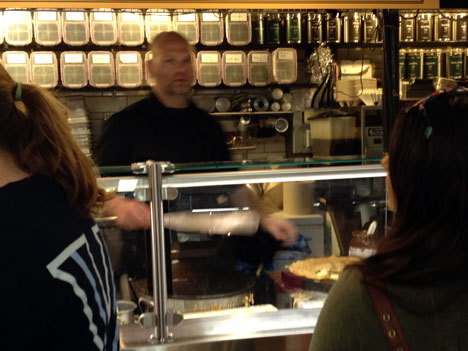 being such a chilly, gray morning, the line was around the corner and down the aisle, and the crepe maker didn’t look very happy at all to be serving, so we left that idea for another time . . . maybe. 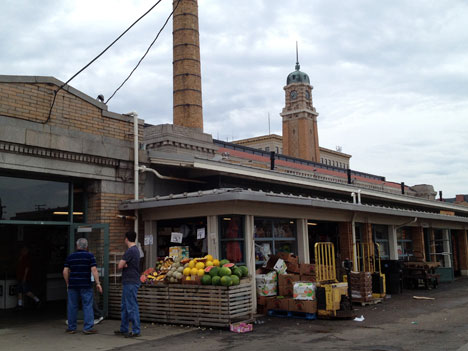 we were done with all our errands in under an hour, which, combined with the ride, was enough of a break, so we headed back to canton to resume our work. 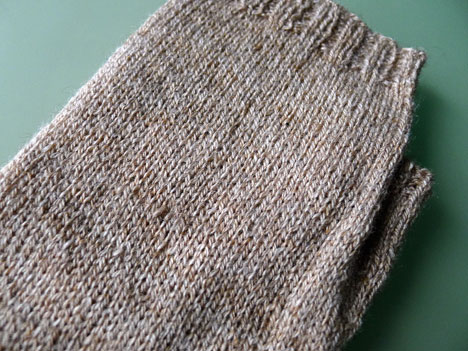 the by the by, i washed and blocked that laceweight mitt the other day and WOW, the difference in the fabric is just remarkable. even when i know that blocking is going to transform a finished piece, i’m still amazed by it.

i’m hoping that you can see clearly the change in the fabric—it might be subtle in the photos (though in person, it’s not all so). 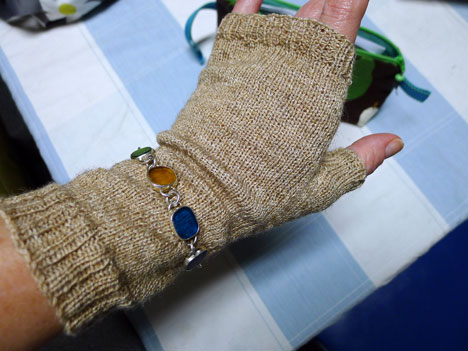 see how much smoother, silkier, and more even the texture is in the first photo? and that is multiplied in the way it feels as it slides on over my skin—it feels simply divine. 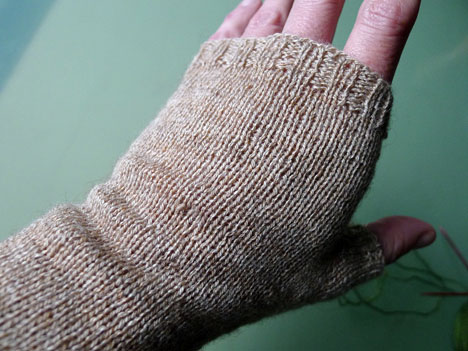 if you think that small items like mitts don’t need blocking, you should try this test—wash just one of them and lay flat to dry, turning and reshaping frequently to encourage the fiber to bloom and the stitches to snuggle into their right positions. you’ll be amazed; i mean it.

now, remember i said i was going to offer a couple of optional detail variations in the pattern? this will be similar to the way the handsies pattern is presented—one mitt construction with a couple of patterns added for the back of the hand. 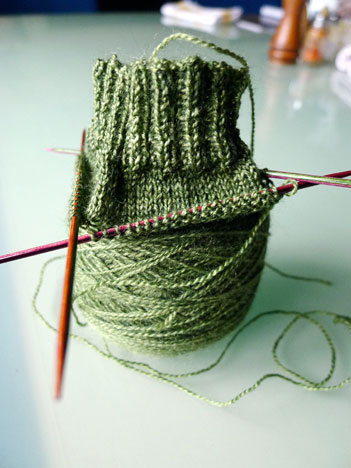 so i’ve started a new sample in a delicious grass green to illustrate the idea for the pattern cover and photo shoot. mmm, green—my favorite.

this is fearless fibers laceweight BFL and silk in colorway melifluous green.

i love the way this yarn is knitting up. it’s different thatn the bamboo/bison blend i used for the first one—a little stiffer, maybe but stunningly lustrous; an example of how the total effect seems more than the sum of its parts.

it appears to be a very fine laceweight, but in fact, it has nice heft as it passes through my hands. and it’s very smooth to knit with. the yardage is quite generous, too—there will be plenty left over to make a wide, sheer scarf and maybe even another pair of mitts as well.

since these are composed largely of stockinette stitch, i’m working on them as much as possible as we get through the material we are covering here. and beckie is dropping by any minute for brunch, so i’ll have some knitting time this morning, too.

in fact, i’d better go make a second pot of coffee and warm up the rolls—i’ll be back tuesday, i think, with an update. 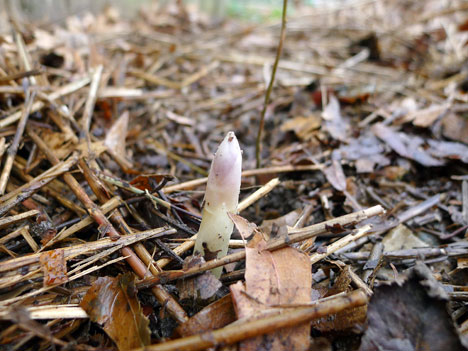