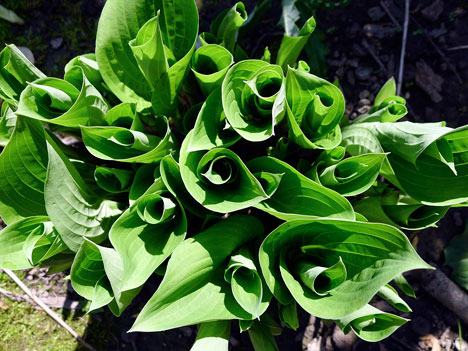 once again this year, i’m spending most of the month of april away from home. it’s a time of great change in the yard and garden, though still too early and cold to plant or to work outside for very long, most days. 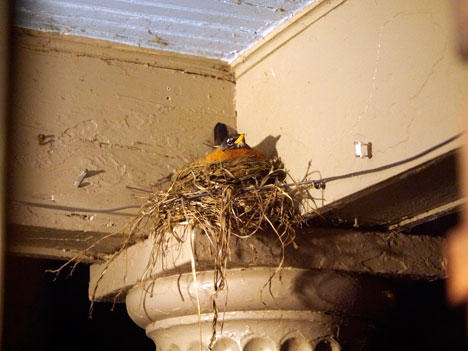 i found this picture in the camera while downloading the photos from our sticks and stones shoot—david must have gotten up on a box inside the entry hall to aim the camera out the window at the robin’s nest.
it’s adorable . . .

and that reminded me that i wanted to check on the dove’s nest as well—i wondered how her hatching was progressing. 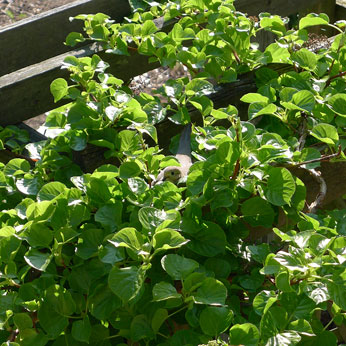 she’s still at it, dead center of the photo, though the greenery has grown up all around her to provide even better camouflage.

(excuse the square photos; i inadvertently moved the aspect setting on the camera without realizing it and got a series of square pictures instead of rectangular ones. variety is the spice of life, right?)

my times at home between trips are often filled with catching up on desk work, but i took a few breaks this week to get outside and shoot some photos. i like to have a photo record of each year’s progress to remind me when the plants emerged, bloomed, and died back. 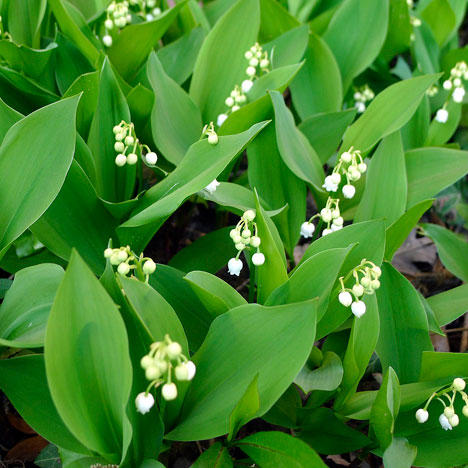 the exciting news as i write this is that the lily of the valley is opening up—by the time you read this, they will all be open and a heavenly scent will fill the back yard, where whole swaths of them are growing. it is totally better than grass . . . i thought the event deserved a slightly bigger size photo, haha. 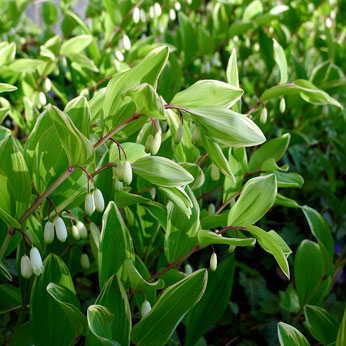 next to the LOV, the variegated solomon’s seal is blooming—we have lots of this too; it loves living and propagating in our yard. 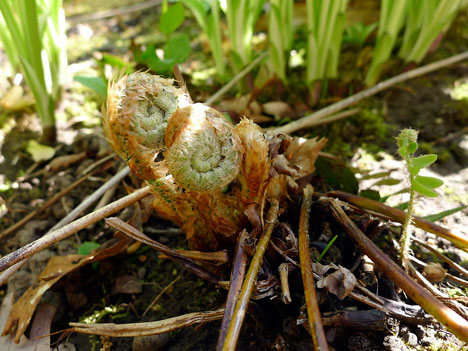 the fiddleheads that were so tightly wound the last time i checked have begun to open and raise their little heads up—they remind me of baby chicks at this stage. 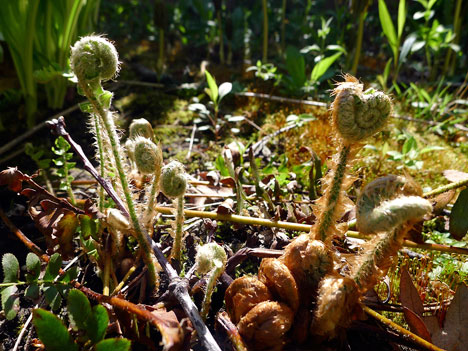 or snails on a stick??
(ok, just pretend i didn’t say that)

i have some beautiful ferns in the back garden and i wouldn’t mind collecting some of the more unusual types. for instance these autumn ferns

they look like a swamp creature, don’t they?
but actually, they change rapidly once they emerge and those black, papery shells dry up or fall off 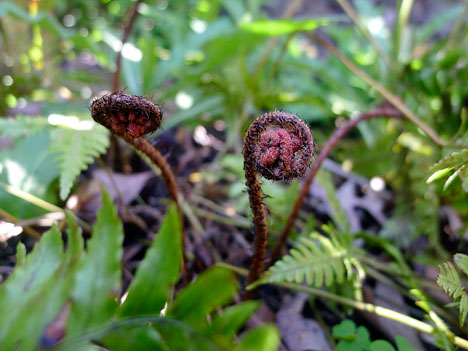 they are quite beautiful, almost reptilian. when they open they are orangey-red, having the opposite color cycle of a green fern. in spring and early summer they flame as brightly as a maple tree. then toward fall, they begin to fade to green and they retain a bright green color most of the winter, finally dying back completely in early spring. 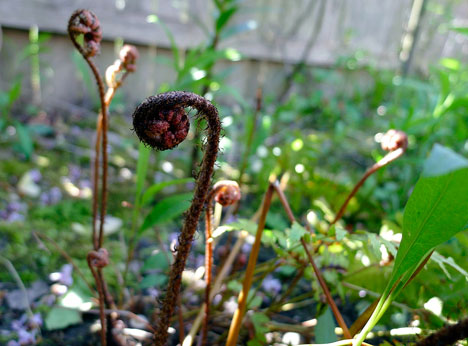 i often miss this stage of their emergence, because they blend so well with rotting leaves and dirt. i’m glad i got some nice photos this time . . . 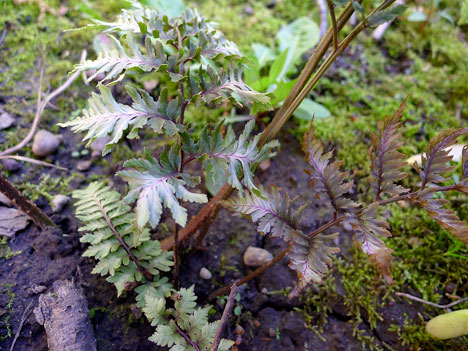 the painted ferns are the early birds of the bunch, having opened a couple of weeks back. i love their veriegated colors; each stem is slightly different and each plant as well.

in my absence, david has taken up the spade to get the dirt turned in the existing vegetable patch and to work on turning yet another section of our lawn into planting space. 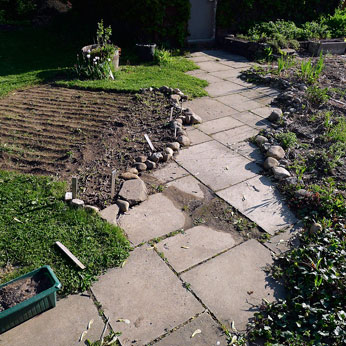 we’re charting new territory on the other side of the path, where i had begun a small patch for greens and herbs. if we had our druthers, we’d dig up the whole yard to dispense with the grass entirely in favor of more space for vegetables and flowers.

but since we don’t have enough topsoil for that yet, we’re doing it one piece at a time (this is also a good way to find out what our limit will be for taking care of it all). you can see where david marked out the perimeter of the new planting area—it will extend from the back door all the way to the garage. 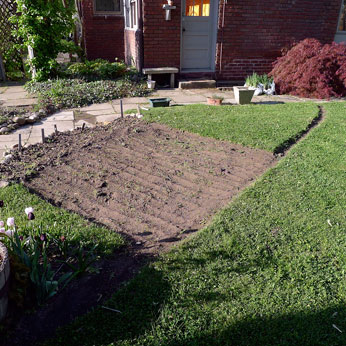 he’s scraping the sod off the top first. this gets carted off to the compost pit, which takes up a very large area behind our garage.

taking care of the compost pit is one of david’s ongoing projects; it was there when we moved in but hadn’t been attended to in years. when we saw how many bags of leaves we filled each spring and fall (over forty, each season), we decided to invest in a shredder in order not to send all that to the dump. now, he piles up all the shredded yard debris over the course of the year and turns the whole shebang maybe once or twice.

the older stuff gets buried under newly added stuff (see the height of that back pile?), where it begins to cook from being trapped and heated by the sun. the cooking produces gaseous emissions, which encourages faster rotting and breakdown of the material. also, it’s a worm magnet, so there are droves of them in there, churning away and adding worm manure. if you dig into the mountain, you can feel and measure the heat of the cooking plant matter; it’s pretty impressive—david quickly learned to save the turning work for chilly spring and fall days. 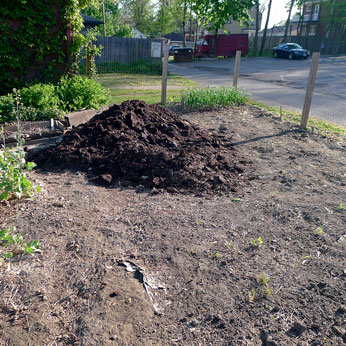 eventually, this is what comes out the bottom of the pile—black gold. we work this into our soil whenever we create a new planting area or when an older bed needs topping off. we also share with our neighbors and some of them are kind enough to pitch in on helping david turn the compost (we’ve probably got fifteen or twenty yards of it at any one time).

i haven’t decided yet what to put in the new planting bed—i’m not sure if one type of crop is better than another for a new area, but i have about two more weeks to think about it before planting time. i was thinking that root vegetables might be good there—they’d provide pretty vines on the street side. but chard is pretty, too . . .

well, i’m done for now—you have a good weekend and i’ll be back probably tuesday. i heard that erica has an update on her sock  project which she’ll be posting between now and then.