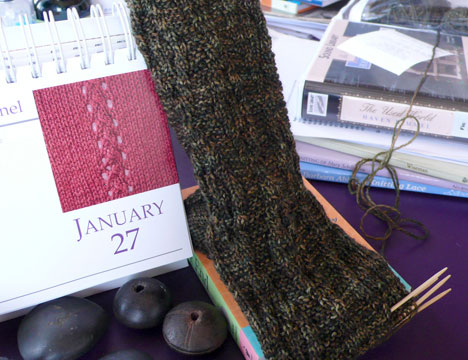 january is drawing to a close already . . . for a while, it seemed to be dragging and now suddenly it is only a few days to february.
wow. i never even made any resolutions or goals for the coming year.

yesterday . . where did that go? i totally lost any semblance of knitting time, and that’s rare for me. but we had a dinner date with friends for whom i promised to make eggplant parmagiano 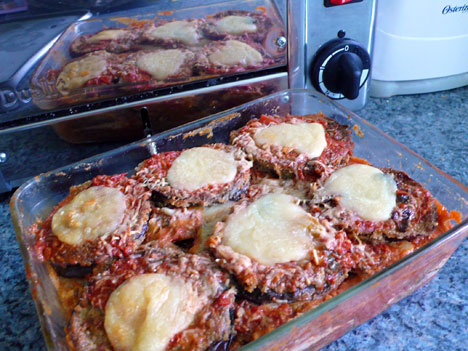 and that takes a few hours so i made enough that we could have a pan or two for later (this would look even better if it was bubbling hot, but it’s been in the fridge overnight).

then i taught a class at the library and when i came home we headed to our friends’ home for a wonderfully relaxing evening with them.

i realized by friday that i needed to get some cooking done this weekend as we were getting low on meals to pull from the freezer. so this morning i fired up the stove again and put a pot of black bean stew on to bubble 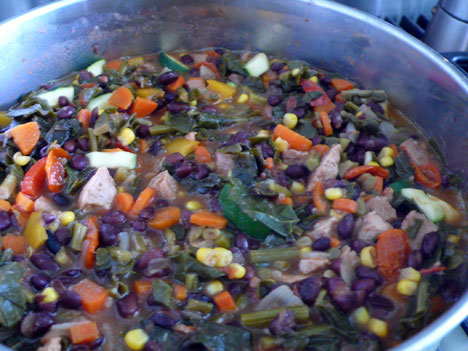 and i think i’ll try to make one of those easy spinach pies this evening—i made enough crust last time to put one in the freezer and i can just roll that out, fill, and bake. that should get us through the week and put some portions in the freezer for future meals.

readers often ask how i have time to get so much knitting done, and this is one of the ways . . . i don’t waste time on repetitive domestic tasks. if i am setting out to cook, i rarely cook just enough for one meal—that’s almost impossible if one is cooking for just two, anyway (at least for me . . i grew up in a large family, i’ve cooked in restaurants and catering, and small meals just aren’t in my vocabulary). so when i cook, i tend to make two or three big batches of food, portion them out, and freeze some. this makes weeknight dinners a breeze, and ensures that we always eat well.

as with all months i got done more and less than i’d hoped . . . like those socks above. yes i’m almost done, but i’ve been almost done for ages it seems. i think though, that tomorrow during classes i can finish. then i’ll have just one sock languishing on the needles and i’ll try to get that one done during february (hopefully, during the first week of february or so . . .).

otherwise, it has been a pretty productive month, and i’m happy. i’m wearing a new sweater, which i never expected to finish so fast. 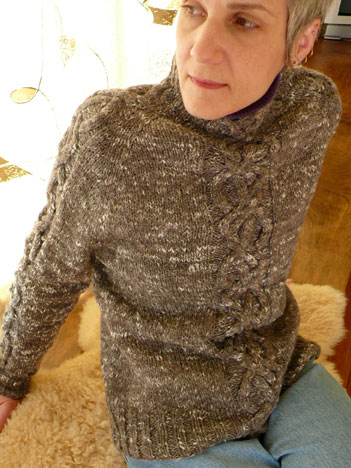 i love it, and it’s toasty warm; i’ve hardly taken off during the last few days. the handspun yarn made a lightweight, cozy fabric with plenty of air to trap that real good warm 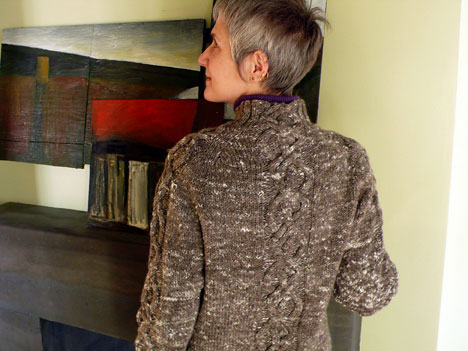 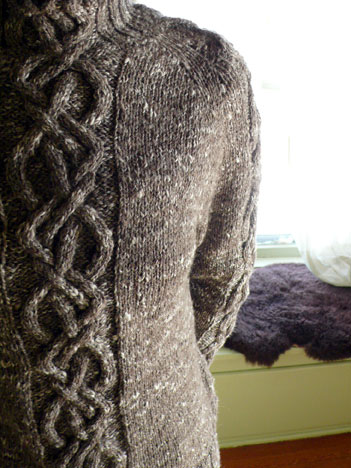 placed on all four sides, it invites a close inspection (and even a squeeze or two) without making the wearer feel self-conscious (just ask beckie!) 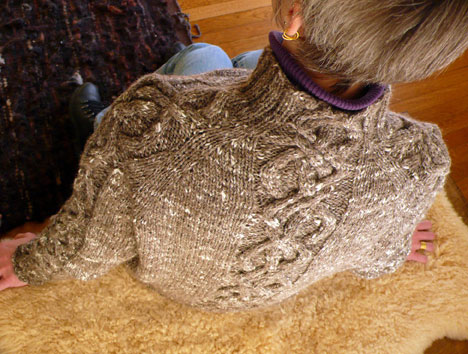 it has enough shaping to be flattering but enough ease to be truly comfortable. there is one thing i would tweak—i went back into the yoke after ripping the sleeve for a second time and increased the top some more. this was good for the width but added underarm length that i don’t truly need. if i had known ahead, or been willing to rip back a large quanttity of the yoke (i wasn’t), i could have put more increases in a shorter space to solve the issue. here, it’s not enough to be disappointed over, but i would tweak that next time. 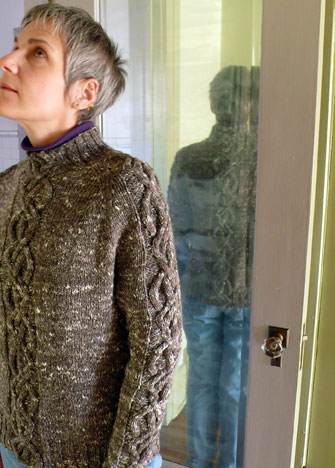 it’s a winner for me and my needs; i’m happy to have it off the needles and doing its job. and i am SO going to start another handspun sweater soon.
(oh boy did i need a haircut the day . . but since then i’ve been to renée, and she hooked me up)

and now, i think i have some swatches and a snow shawl calling my name . . . and some shoveling.