today i have a bit of this and a bit of that—not really anything that makes a coherent story.
oh yeah, but we’re talking about me and my knitting so chaos is status quo.

first of all, HAPPY BIRTHDAY to my two nephews, james (28) and daniel (11). much as they may chafe about sharing a birthday, they are each uniquely special to me. i marvel at the admirable, arian qualities they share (great sense of humor, gregarious personality, self-assurance, ease in conversation) and delight in the differences that set them apart (daniel has a beautiful speaking and singing voice, james is a veritable arsenal of information about comic book art and artists).

i finally scored a skein of the right dye lot of ranco to finish my school socks, though it doesn’t match all that well, unfortunately. 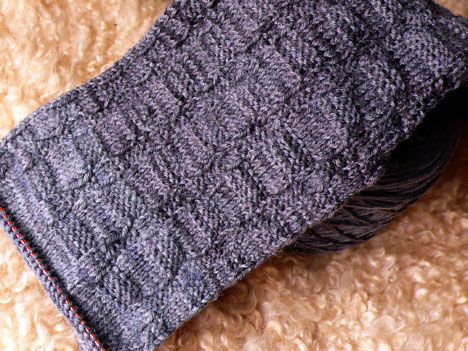 i know. i should rip back and intersperse the old with the new so that the transition is nicer (why didn’t i think of that at 1am??). of course i should, and curse me for not doing that to begin with. but i also want to have these off the needles—like now—so i’m waffling (can you believe the laziness??). why am i not willing to go back and fix it when i am happy to do in more complicated circumstances for less obvious reasons?

ahhh, the eternal question (hmm, maybe the answer is in stephanie’s new book).
i think the cause is a temporary feeling of too much to do, needing to put closure on something, brought on when i when i gaze over my flooded inbox 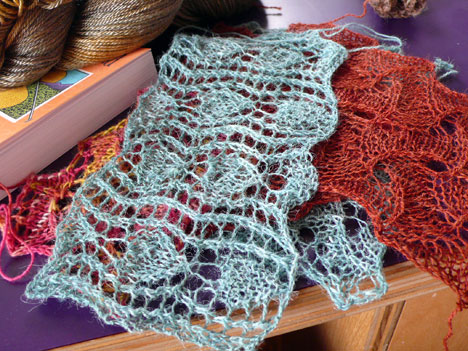 but then, what an inbox, right? who wouldn’t want this to be their workload for the next little bit?
i really am very lucky, and because of that i should fix the sock, right?
right. maybe after i put together a scarf pattern and get another foot done on my secret project (which i’d like to finish up this weekend, so i’d better get crackin’ on that . . .)

or, i could just move on. oh yeah, i’ve already done that 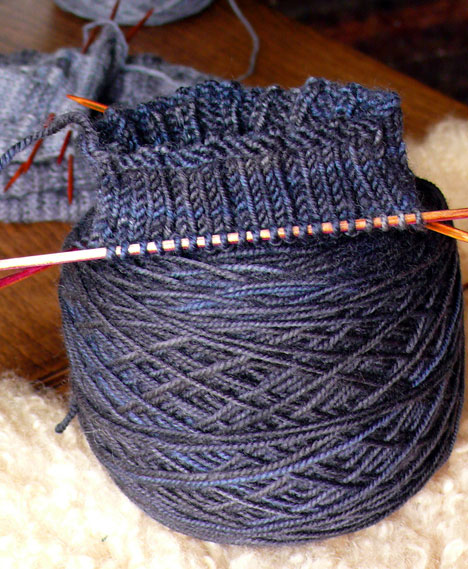 oh, and i’m not a virgin any more—i’ve finally broken into one of the STR sample skeins i have, to continue my exploration of how best to use very dark colorways in socks. this is one of the raven clan samples tina sent me last summer; i’m not exactly sure which one (it was marked only by number), but i’m thinking it’s haida, or an early version of it.

i know this little bit of a sock tells you nothing, but all will be revealed in good time.

the mail carrier brought another little surprise for me this morning 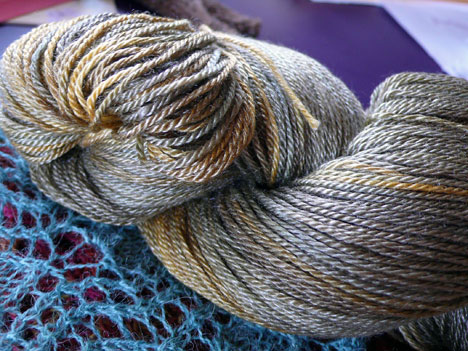 this is a test skein of a new sock yarn that deb is thinking of adding to her fearless fibers collection. it’s a merino/tencel blend and she’s really excited about it. i’m going to try it out, either in a sock or in a scarf or maybe even mitts. it’s an interesting colorway with lots of rich gold.
hmm, yes, i could see doing some mitts in this—they would make one’s hands look like they were sheathed in precious metal—it could be really nice.

it is trying so hard to be spring here 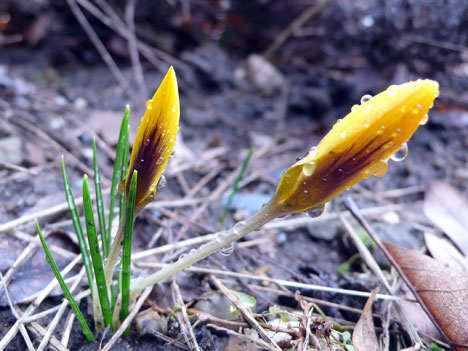 while at the same time being determinedly stuck in 30-degree cold. these crocuses had half-opened the other day in a tentative testing of the spring sun, but have snapped themselves up tight against the chilly wind and rain today. 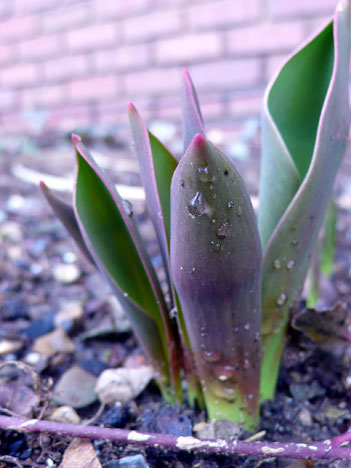 our first tulip has broken ground in a hardy surge toward its goal.