i confess—i couldn’t keep my hands off the mediterreanean sock yarn—and can you blame me? just look at those juicy blues and greens. so i caved, wound it up, and began swatching.
i started a sock with it last night which i won’t show you just yet; i want to get to a certain point with it to show off the full effect of the yarn and stitches together.

but i’ll give you this; it’s a great yarn to work with. the twist and texture are a lot like koigu, and it has lots of bounce, with great stitch definition. and the coloration is simply gorgeous; i keep stopping to look at how the colors are coming together and floating apart; it looks just like water. 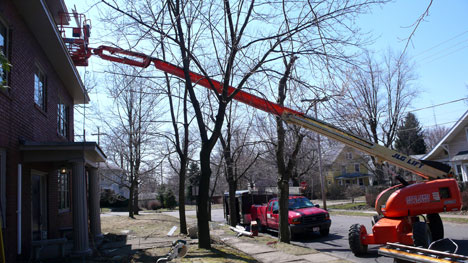 i’m not sure if this qualifies for eye candy, but it certainly brought our house project to the next level for me. i dunno why, but i found the need to use one of these sort-of impressive. i thought seriously about asking one of them to take my sock up there and hold it for a photo (you know, for the inexplicable knitter behavior), because the guy who ran the job is married to a knitter i know and he might have understood this—i’m an optimist—but i decided the guys looked WAY too busy to deal with my shenanigans.

and now, of course, as i write this, i regret it.

at any rate, i’m glad the workmen decided that ladders were just too dangerous for the high areas of the house; i was more than a little squeamish about that.
and it made the job go a lot faster—they are gone, all done.
just in time, too; an hour after they finished last evening, it started raining.

the last few gloriously sunny days, warm temps, and now rain, have combined to orchestrate some major changes in our yard. 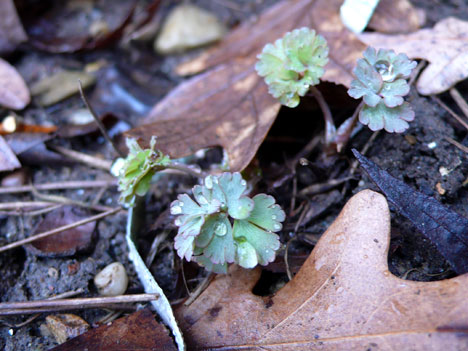 the bleeding hearts are up (oak leaves included for scale, and because well, they were there). this floors me; it seems like just a few months back back when they were growing last, and i was designing a stole for IK as a reflection on these tender little guys. was that really a year ago? wow. 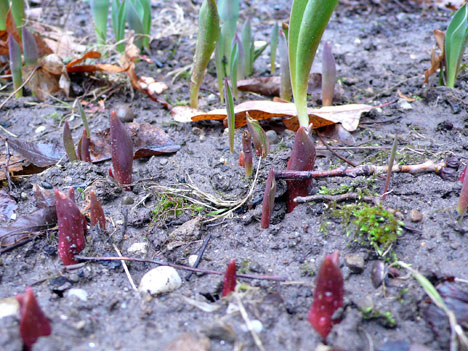 they are popping up everywhere. which is nice because last year we had precious few (that could’ve been due to a late snowstorm/freeze which killed a bunch of our plants in april). it could also be that david overcompensated for last year’s lack of them by planting lots and LOTS this year; i dunno. (tulips are a real favorite of mine, so he is insistent that we have waves of them in large quantities. hey—i’m not arguing)

i’ve been working out a new shawl design (and that sock i talked about) so i haven’t been knitting full force. i’ve spent a lot of time with my face buried in the knitting books, looking for the right edging or swatching (lots of swatching).

i like to get this kind of work out of the way during the week so i can knit a lot over the weekend.

however, i did start that sock, and i’ve been working on my two new scarves late at night. i have to promise the responsible side of myself that i will keep the impulsive side of myself away from them until i get a certain amount of other work done, because once i start, i can’t stop 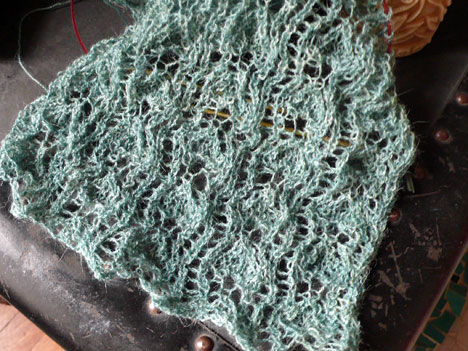 good thing it’s fun—i’m constantly saying to myself “i’ll go to bed after i finish this repeat”. but that’s a lie and i know it before the sentence is even out of my (imaginary) mouth i don’t. this one, in particular, really sucks me in

and i know you’d fall prey to the same syndrome. luckily, it is so tiny and light i can stick in in my pocket or purse and work on it it anywhere.
not that i go anywhere. but i could, and then i’d get more done on it, probably.