i’m at erica’s place, working for the weekend. this morning she had a non stress test; i played the role of spectator, keeping erica laughing for the duration. there was plenty of knitting time as well, which i spent on twig and leaf, but did not take pictures—apparently i am only capable of taking pictures of one subject at a time, haha.

after the non stress test, we moved on to the BPP ultrasound 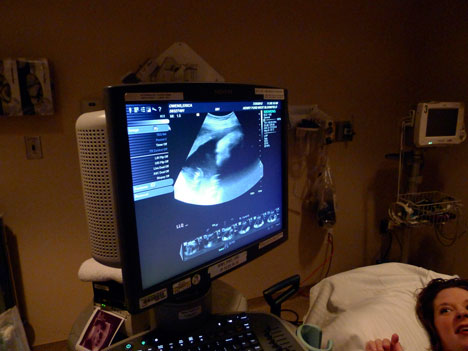 which was even more cool; the technician was really enthusiastic about the baby’s movements and behaviors and gave us a very detailed blow by blow of the whole show. i’ve never seen an ultrasound before and being one of those people that can never figure out what i’m looking at in the photos—head? butt? i can’t tell the difference—i found it fascinating.

in fact, i managed to shoot a nice five minute video of the experience, which i’ve posted on the knitspot youTube channel for your viewing entertainment.

i got a lot of knitting done since you saw my project last, so next time, i promise i’ll have a few photos to share . . .

10 thoughts on “six weeks to ejection”