as fall runs its fingers through our garden bringing cool nights, a little more rain, a few curled and dried leaves, i tend to let it have its way with things. i give up on keeping things tidy, even though this means  i have to crawl through tangles to find ripe tomatoes or summer squash nested among layers of decaying leaves. 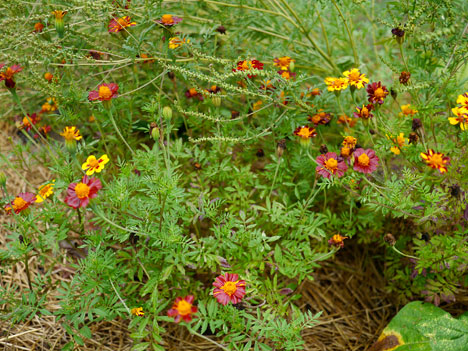 i enjoy watching everything return to wild chaos, becoming one big franken-shrub with an arm here of basil, a leg there of tomato, with eggplant leaf ears and a tall, tall radish body, gone to seed at the top. i let it go every year, just to see what happens. sometimes it’s just a quiet, gray demise but sometimes, it’s a real swan song with fireworks and everything. 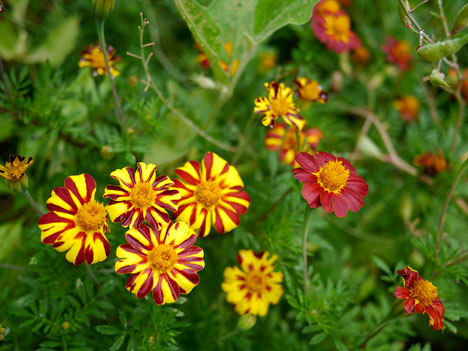 even at that, i can’t help but notice this week how suddenly and ferociously the marigolds have risen up to claim the kingdom. they are all at once everywhere, gigantic and and flowering profusely from every stem.

it’s a marigold rave, a burning man, i’m telling you. 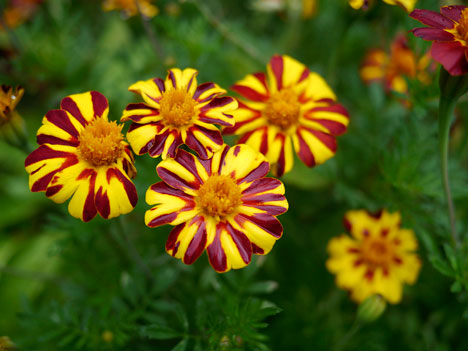 the marigolds are planted throughout the garden, along with the nasturtiums and radishes, to help keep the bad insects out. and together, they have done a bang up job of it—we had literally no damage this year from squash bugs, stem beetle, spider mites, aphids, and whatever it is that always gets to the eggplant. they are so hired back for next year.

i noticed a couple of weeks back that they were getting big and they had millions of buds, but there were so many and it was happening so fast, that i actually thought i had mistaken them for something else and it was just weeds taking over. 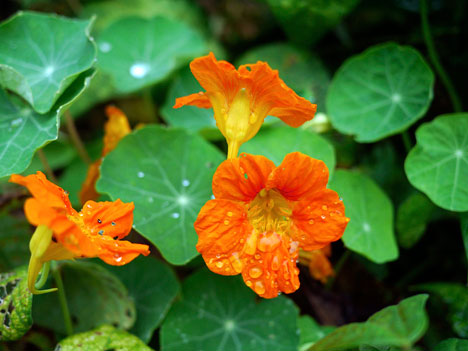 because the nasturtiums are at it, too. not with quite the abandon of the marigolds, but certainly a robust showing. it’s as if they’ve just been waiting for those noisy vegetable kids to clear out of the way so the flowers could show them how it’s done. 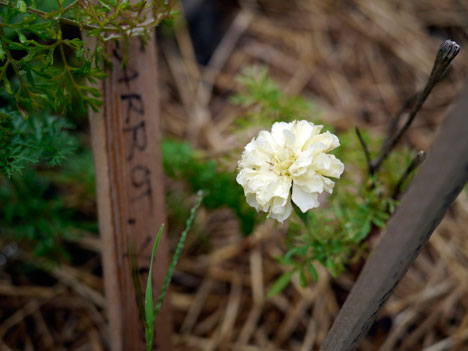 this is my favorite one i think—a lone vanilla flower at the head of the carrot row. i’m sure it won’t stay this size for long—it has many more buds on it . . .

ok, speaking of the garden, who wants to know who won vegetarian cooking at home??

that would be . . . danielle, congratulations!
thank you everyone for participating; it was fun to read your comments on foods you’d like to know more about.

ok, enough about food; let’s talk about knitting. i’ve been making excellent progress on my indigodragonfly sweater—in fact, a tidy little pile of completed pieces is piling up. 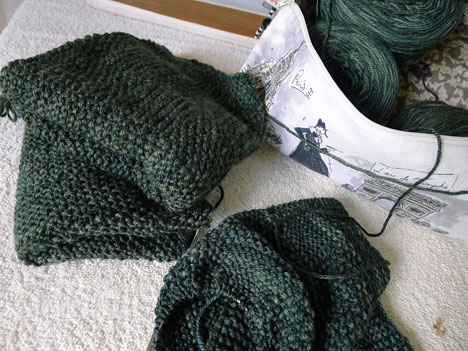 two sleeves are now done and i cast on the back piece sunday night. since monday was a holiday, susie and debby didn’t have to work and we got together for our second knitting breakfast in three days (go us). i worked on the back piece of the sweater because the relaxed, easy knitting goes so well with goofing off. 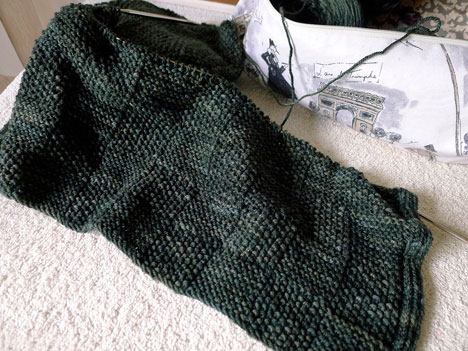 by the time i went to bed last night i was about halfway to the underarm bindoff—a decent showing, i think, considering i have a couple of other projects in the works.

oh and when i took the pieces out of the project bag today to photograph them, what do you think fell out??

a quite dead, but perfectly preserved, baby dragonfly.
for REAL. how strange and wonderful is that?? i know it has to be some kind of omen, but i can’t think what. kim swears she did not put it in the yarn on purpose, but i can just hear its tiny little voice saying “curse your sudden but inevitable betrayal!”

do you want to know the results of our sweater naming game?

so, full disclosure: when i set up the survey, i forgot that on survey monkey, you can only get the first 100 results for free. well, we had nearly 400 votes, so i wasn’t able to access the majority of the results. but i figure, the first 100 was probably enough to show a trend that would continue, right? since we’re all grownups and no one was winning a prize or anything based on the results, i went with the results form the first 100:

Bloch Ness it is then. i like that one; it goes with the green polwarth/silk yarn, right?

while i have been making steady progress on wasp and rose as well, i know it’s been frustrating for YOU because you can’t really see the patterns or even the length as it’s all scrunched up on the needles.

however, the other night, i got to the start of the hem chart, where i am changing to a slightly larger needle. i saw the opportunity for a photo op, so i grabbed the chance while i had it

wah-LA. ok, it’s not done yet, but take a gander . . . it’s looking pretty good.
the photos are a bit dreary because it was dark and rainy all day yesterday (yay), but we’ll get better ones later. 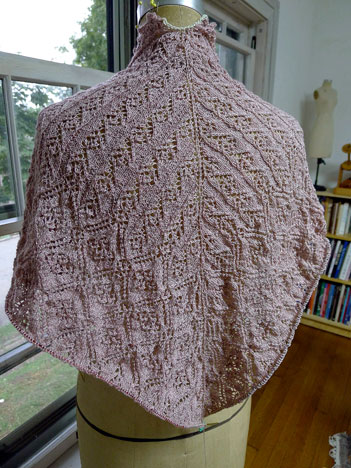 and i don’t know about you, but i just had to see what it looked like on the dress form. 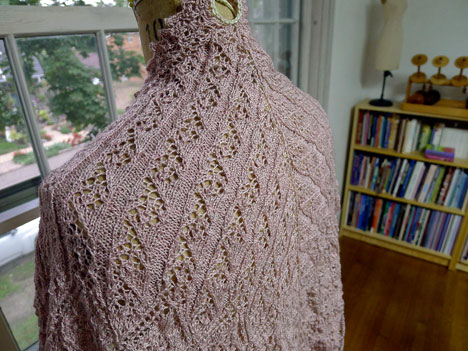 i love the stripes and how they lay over the shoulders and neck.
i know it looks all crinkled and messy now, but it will amaze you with its ability to magically transform into a thing of beauty during the blocking—trust me, it will be positively ethereal. 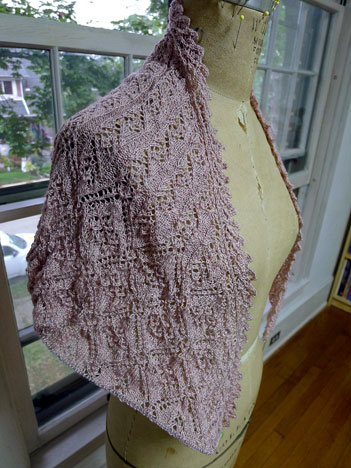 it will also be quite a bit larger than this—i’m knitting the tall size and it will grow a good deal; about 40 percent, i would say, based on experience with similar fibers. the petite size will be smaller, but still generous, not a shawlette. there is really only one section in this piece that can be resized.

i started the hem section while i chatted with cookie on the phone last night; i think i have 32 rows to go til it’s bindoff time.

hey, turns out, i’m not done talking about food—remember those peaches i bought over the weekend? well i got some of them put up for the freezer on sunday, but the rest needed to ripen for a few more days and today when i woke up, they were ready. 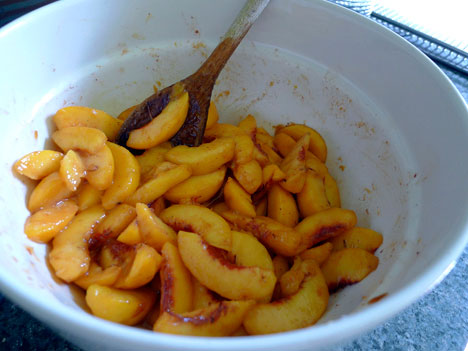 since they were the perfect first-quality ones and since we have spinning class tonight, i decided that it was time to bake the fresh peach pie i’ve been craving for a couple of weeks.

the peaches were so ripe that the skin pulled right off; i barely needed a knife at all. i sliced them and added brown sugar, a few pinches of clove, nutmeg, ginger, and cardamom, and just a few shakes of corn starch. 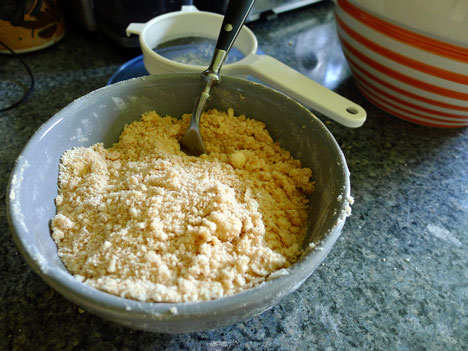 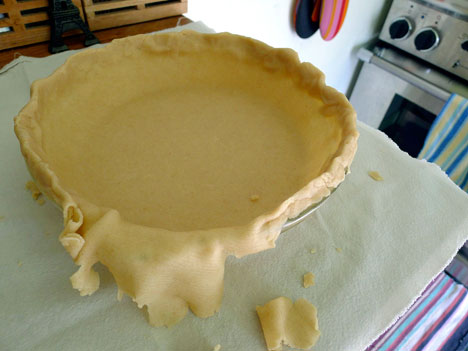 while the peaches macerated just a bit, i rolled out the crust i had stored in the freezer, all set to go. 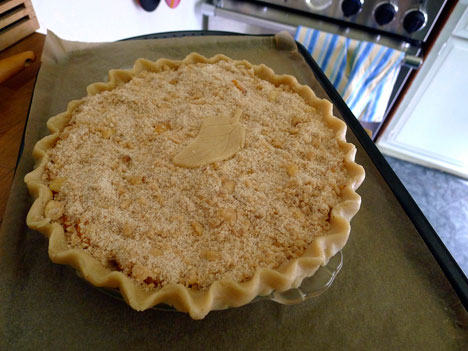 the assembled pie, ready to go into the oven, on a baking sheet lined with parchment to catch any filling that bubbles over 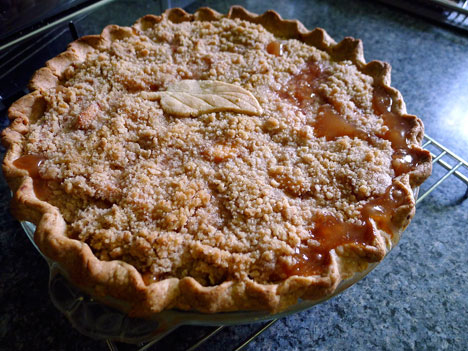 about 50 minutes later, it was perfectly done—lightly browned and fragrant.

the scent is intoxicating, i mean it. and it has filled the house, YUM. 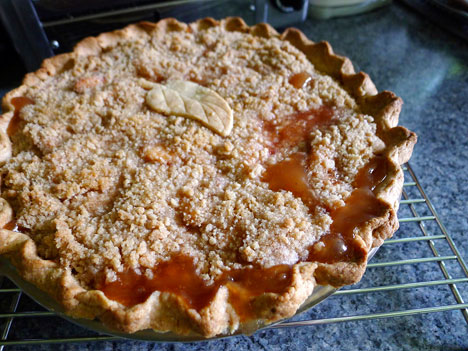 i even managed to get a shot of the filling bubbling up; how sexy is that?

boy oh boy, is the monday class ever gonna be jealous.
i might just have to make another for monday . . . or maybe some cobbler—yeah.

ok, time to back away from the pie, before i lose my senses and dive into it.

what could possibly follow that up? well, i’ve got tomatoes . . .

that’s going on tomorrow’s agenda; time now for me to get a bike ride in before class.