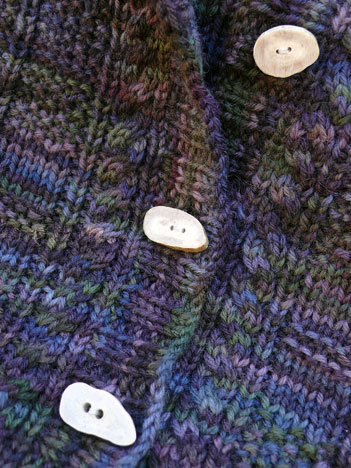 i guess you could say that it’s good to have focus. it’s good to be monogamous to one project from beginning to completion. but boy, howdy—as much as i like the results,

i am not used to it. being so buried in working on one thing makes me feel disoriented when i’m done. like i lost a week there or something. but nevermind, i’ve got a new sweater, yay.

and one i really like. i finished knitting the sleeves on wednesday evening and blocked them.
then i sewed the first one in while we watched TV late into the night.

yesterday i put the second one in and sewed on the buttons, then wove in all the yarn ends. finis!

and it fits great . . . it’s dense and warm and the fabric feels yummy—it’ll be a great indoor/outdoor sweater. it’s a little smaller than i imagined it would be, but if it was bigger i might find it baggy; a bigger sweater would need to be a bit lighter than this one i think. this has a classic fit with about two inches of ease and looks trim and neat. there is plenty of room for a shirt underneath without excess folds of fabric where i wouldn’t want them. i’m very happy.

and hungry to knit more sweaters now. i have another batch of this yarn in a different colorway 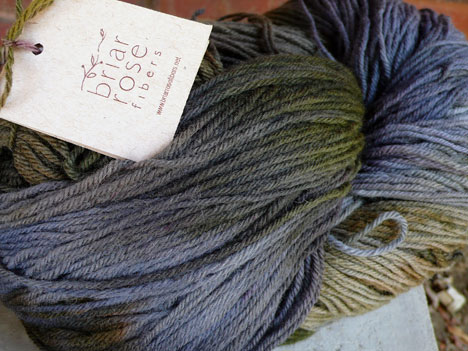 that is keeping me awake at night.
and then there is the baby spice handspun . . . 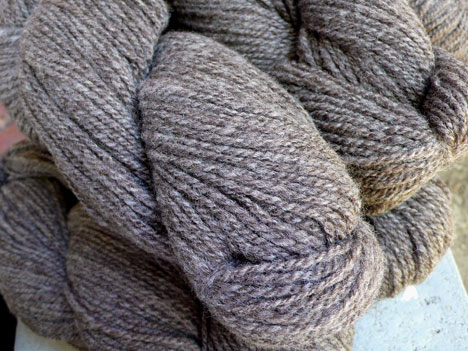 which i would love to knit up in a looser, more casual sweater.
something like my old bathrobe sweater 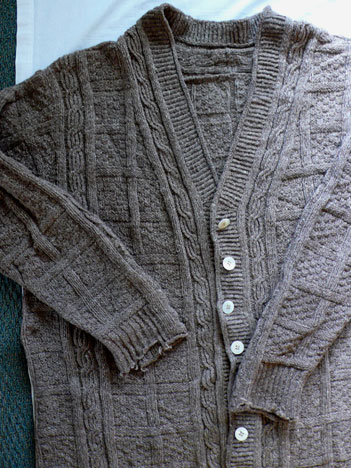 which has seen better days and now cannot be worn outside the house (besides, the size of it dwarfs me and that looks a little silly). but i reach for it day after day in winter because it’s so right—it’s light but long and cozy and warm. and while i’m not saying i want to replace it*, i think that in its old age it deserves a few more rest days than i give it—an alternate choice would be a good thing.

*(i just couldn’t. and anyway, it’s still very good except for those cuffs i am too lazy to fix—or maybe i just like them; i think that might be more like it. you know, when it comes to clothes i see myself turning into my father a little more every day and i really need to watch that. he was married to his oldest, most worn clothes, and i’m afraid i’m just like that.)

and it’s about time i knit that yarn up; i spun it at least two years ago, maybe three.
i know it’s not a colorful color like i said i would knit, but i love it.

now i know that before all that, i need to write the pattern for this new one (it will take time—i’m new at the sizing thing—but i’m doing it. please be patient with me; it is coming.). i also have a couple of shawls on the agenda for the next little bit and some small items (mitts!). 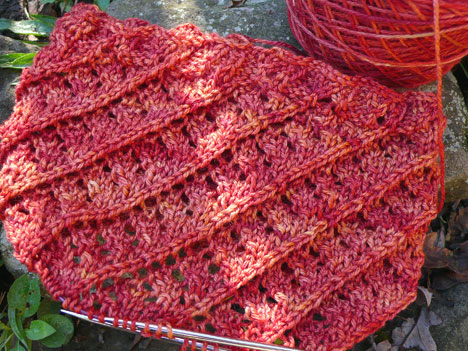 and all i have left to do on that is the edging at the bottom. then i can block it and take some photos of both the red and the iris one.

this afternoon i’m swatching for the fearless fibers shawl (i think it’s going to be a triangle), and hopefully casting on mitts as well.

my butternut scarf is growing and maybe tonight i’ll put some inches on that—it will be nice to have something light and delicate in my hands.