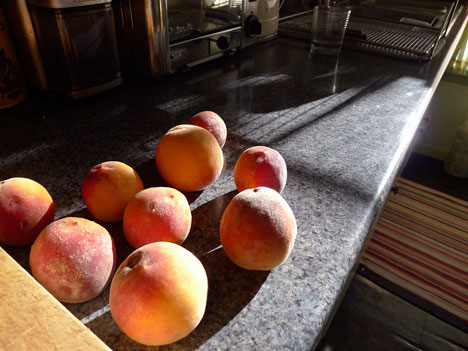 i think this is just about the last of the fresh peaches we are going to see in our area—boo hoo. when i went to the orchard on saturday to pick some up for baking this week, there were just a few boxes left and while the flavor is good, they are not as consistently nice for eating as they were a couple weeks back. 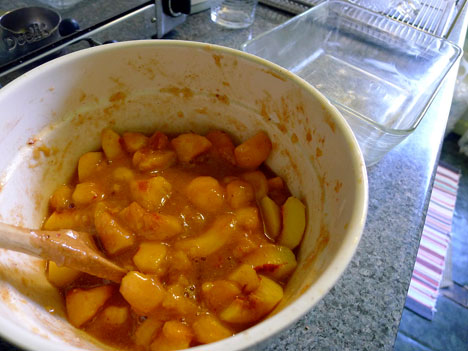 plenty nice enough to bake with though—and that’s just what i set about doing, first thing monday morning. i had promised my monday class that i’d bake a cobbler.

(can i just say, i don’t care; i’ll have it either way if you just keep talking to me like that)

i found some tasty sounding recipes from both camps, so i was a bit stymied as to which way i should go. then i realized there was a simple solution—just take a poll. and sure enough, when i asked susie and debby, they both voted for top-crust cobbler.

i used the recipe from an old favorite of mine—farm house cookbook, by susan loomis. the author traveled all over america talking to farmers and their families about the food they grow, while collecting their recipes for this wonderful book. i have made many, many dishes from this collection; not only is this book filled with terrific recipes, it’s chock-full of good cooking advice and fascinating stories as well. very well worth the price. sadly, it’s out of print now, but you can still buy it pretty easily. 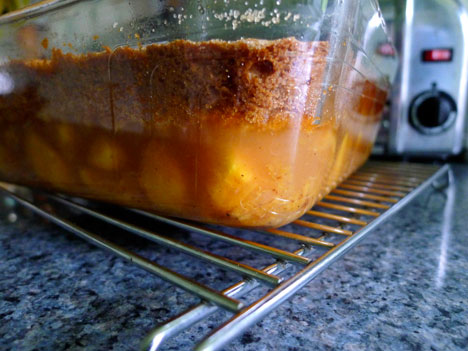 while this top-crust is similar to a biscuit, it is also not. it doesn’t have exactly the same crumb or density and is definitely moister. it takes a while to bake and you have to let it get pretty brown to be sure it cooks all the way through, but that will not cause it to dry it out.

the recipe fills a very large pan, so i cut it in half. normally, the filling would be able to bubble through the crust, but my pan was a little smaller than it should have been, so my cobbler came out deeper and the topping more solid. no harm done—it was grand. 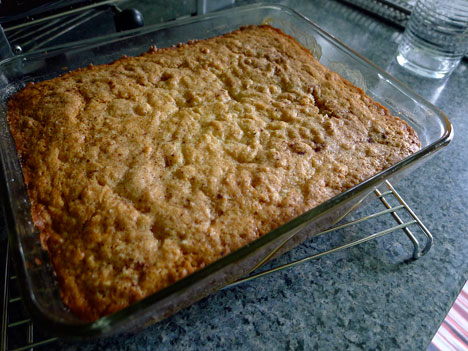 for some reason, i did not get a picture of it plated up—and the camera was sitting right there, too. i must have been distracted . . . the general consensus from the class was “stop asking how i like it; i’m busy eating”.

the afternoon was bright but chilly enough for sweaters and anne C. showed up in her completed blumchen. look—it matches mine exactly, haha. she wants you to know she loves it and will probably be making another, very soon. our friend cherie has shared her recently completed the short sleeved version on ravelry and has told me that while she loves all of her sweaters dearly, this one has risen to top of the heap—she’s just thrilled with it.
yay for a sweater we adore. 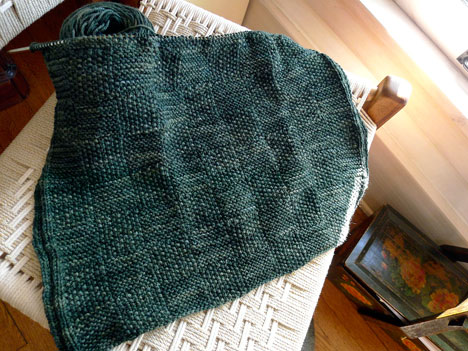 my own knitting is making progress, though it seems to look nearly the same as it did the last time i showed you. here is the bloch ness back; i’ve knit to the underarms several times since i last showed it, haha, because i changed my mind twice about the body length. i’ve settled on it now and am finally working on the raglan shaping. the color of this polwarth/silk blend from indigodragonfly is photographing particularly well these days (the site says the color is sold out, but kim will gladly dye you up a batch if you email her).

on and off, i have doubts and concerns about those selvedge edges. 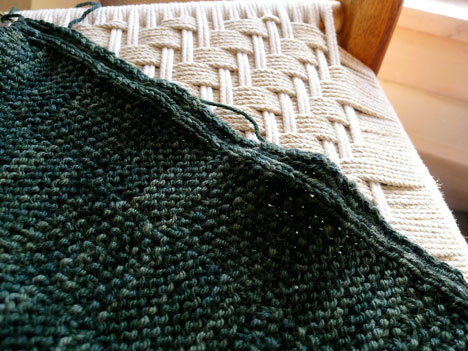 they are might curly; i sure do hope they flatten out with blocking and seaming. based on my swatches and experience, i’m making an educated guess that the garter/seed stitch pattern will relax and elongate once it’s been soaked and coaxed into its final shape.

even now, they straighten out completely with just a little tug on the fabric, so i’m hoping i’m right. once i have this piece off the needles, i’ll block to out to see what happens. but i won’t stop knitting yet, no sirree.

but i will be really pissed if i have to rip this whole thing out and start the body over with cabled seams instead of ribbed seams (and still, she doesn’t stop!). 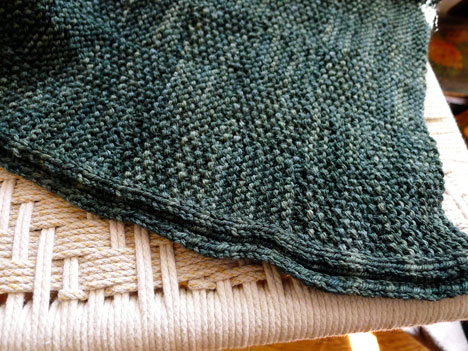 as with a sock heel flap, one side is worse than the other; from this angle it’s not all that much of an issue. so i’m thinking that like a sock heel, when it’s all tidied up into a seam, steamed, blocked, and then washed, everything will pull together nicely. 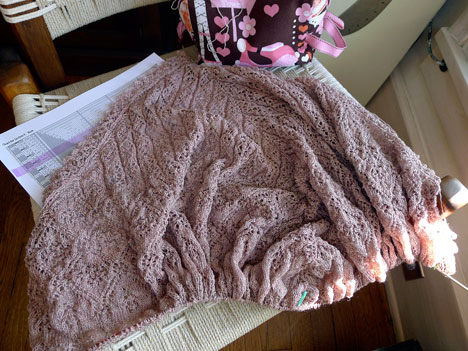 i am in the final—but extremely slow moving—stretch of wasp and rose. that’s the last chart and as of yesterday, when this photo was taken, i had sixteen rows to go. now i’m down to ten. if i could just take the afternoon away from the computer to knit, i’d finish it up for sure.

but i have a club chapter to finish up before i can do that. believe me, as soon as that chapter is done, W&T is getting finished, too. it’s not that i’m ready to release the pattern—no, that is still with the proofreader (it’s a hum-dinger and she needs lots of time). then it will need to be test knit, too. so, no, i don’t need to rush for those reasons.

i just want to be done, haha. i want so badly to see the blocked shawl, i can taste it.

and of course, it will be nice to move on to other things. i want to get started on some new accessories for fall and for the holidays (i know—it seems early, but for me, it’s not). i would also like to start on a design for the boys—a raglan pullover version of sticks and stones for the shorties. i’ve got three little guys who would look great in that. 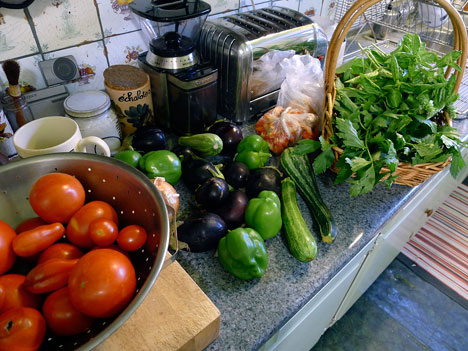 last night, i unloaded the produce bin of the fridge  to make a big pot of ratatouille—some to eat for dinner and some to store away for winter. we had tomatoes, eggplant, zucchini, peppers, onions, garlic, and basil—all from the garden. not one ingredient came from the store.

i use the recipe from another old favorite cookbook—the cuisine of the sun, by mireille johnson. i’ve cooked this recipe so many times that i know it by heart and as far as i remembered, i have made very few, if any, changes to the original. but i got out the cookbook yesterday anyway, just to verify my method before passing on the recommendation. 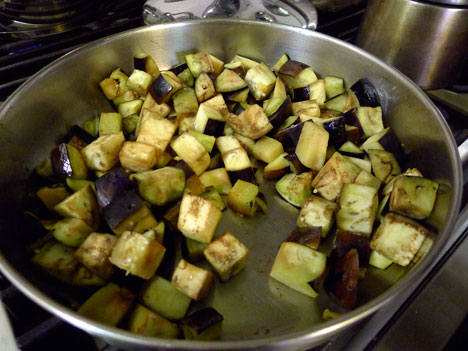 it’s such a simple, simple dish to put together; the only challenge to making it is keeping everything from cooking too much—you want to retain the fresh, bright summer taste and texture of all the vegetables. it relies heavily on getting the eggplant sauté right, so that you don’t end up needing to stew it too long later on. 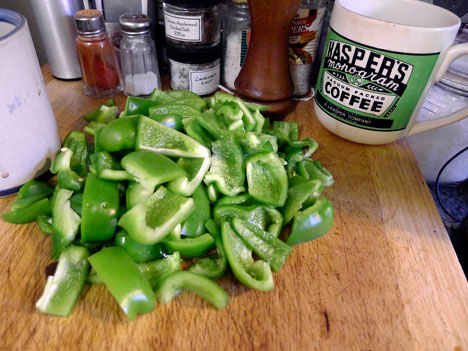 using the freshest young vegetables possible will go a long way to making sure they cook quickly. big or old vegetables get tough and interfere with the process. cut everything into nice big chunks—they will better retain their color and tolerate some variation in cooking time, should you get behind or interrupted. 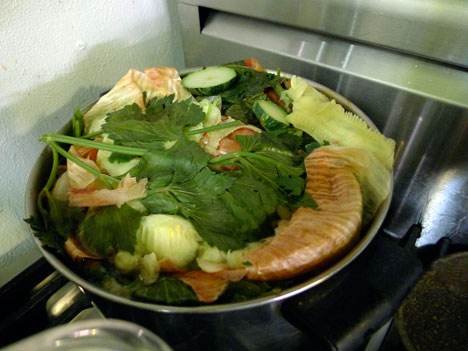 since i’m cutting up lots of vegetables all at once, it’s a good opportunity to put a pot of  vegetable stock on the back burner, using the discarded tops and bottoms, seeds and peels, along with a few stalks of celery, some parsley, and an old potato or two.

meanwhile, on the front two burners, i am sautéing the vegetables one by one and adding them to the pot of crushed tomatoes. once everything is in there, it gets seasoned and cooked, just long enough for the eggplant to be tender.

then it can sit; you can eat it right away or cook it in the morning and let it sit. and many people prefer to eat it day-old. i usually plan to let it sit several hours on the day i want to eat it, but last night we had it right away and it was great. no matter which way you do it, wait til just before serving to add great handfuls of fresh basil (preferably picked in the morning, when it is at its sweetest)

this way, the leaves are barely wilted when you plate it up and the scent from the dish is extraordinary. for the cartons i put in the freezer, i piled fresh basil leaves on top before putting on the lid, to add before serving on some future winter day. 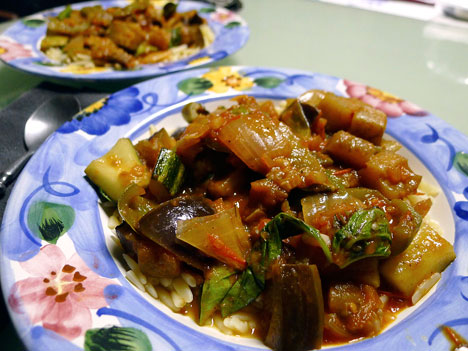 the final result was fantastic, if i may say so myself—the eggplant was especially divine. oh, how i will miss these fresh eggplant when they go by the by in a month or so . . .
we gobbled it up, served over orzo pasta, but not before taking a picture to show you.

and for dessert, we’ll have the cobbler, please.

with that, i’m done for today. i have a million things to do before class this evening—did i mention a book chapter?? yes, it’s time to edit photos—people are waiting . . . 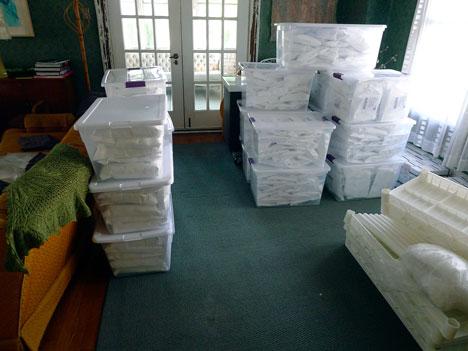