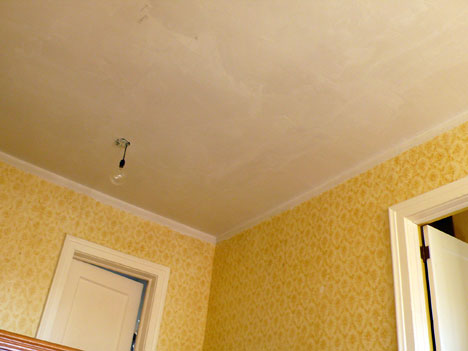 so, i came home from new mexico last week to discover that, after three years of looking at the dark underside of the third floor sub-floor (say it three times fast), we are finally getting a new ceiling in the center stair hall.

david said he wanted to do the job himself (natch), even though it would require some special equipment and could possibly be dangerous (oh joy). he figgers he’s saving about $1200 (we’ll see about that). so he decided to do the job while i was away. i was glad . . . working in the two-story space normally requires this 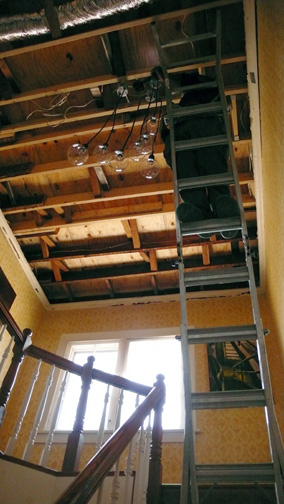 i can’t rest at all when that is going on, much less knit with peace of mind. david wisely suggested that if he worked on it while he was alone in the house (i had visions of dead husband sprawled over the lower-hall floorboards), the mess and turmoil would be mostly cleared away by the time i got back. so it was with much anticipation that i entered the house last sunday.

but alas, things were as normal—all behind schedule. nothing is as efficient in reality as it is in one’s mind during the planning. that said, the project has not caused as much disturbance as we’d imagined (maybe that’s why “we” are not feeling so much urgency to make it move faster).

david set up a good, sturdy staging platform from which to work 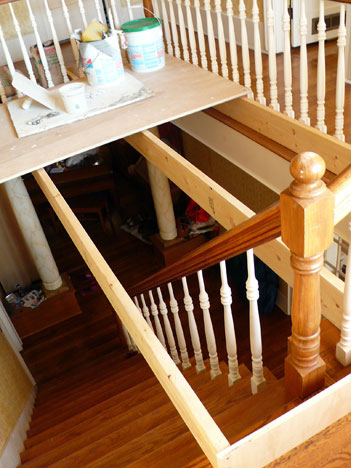 with sliding plywood sheets that he can move across the gap as needed. and since he is a very clean worker and always tidies up nicely each night, the mess isn’t too bad either.
there’s just one thing . . . 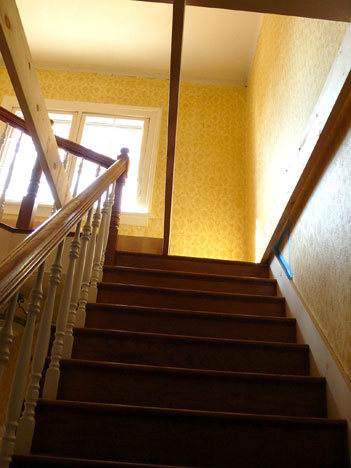 wanna guess how many times i have knocked my head on the @&%$* joist supporting the platform? geesh.
i’ll go way out on a limb here and predict that i’ll just about have it down to a science when that platform needs to be dismantled. such is life.

so anyway . . . i do have to say that the new ceiling is excellent. the light up there is already enthralling and the skim coat of plaster hasn’t even been applied yet. once that’s up, burnished and waxed, that space is going to be awesome (well, as much as it can be for now; we still need to rip down that wallpaper and do something about the tacky railings someone installed on the cheap).

with all that soft, glowy light, we should be able to use it for photo shoots. that’ll be a lot warmer than doing them all out in the snow.

david’s also playing with something new he bought on ebay. ok, actually, he’s re-doing the bathroom he just finished re-doing. just one part (so he says)—apparently the wood slab he installed as a vanity was temporary (wow, really, coulda fooled me; i thought it looked great). he intended all along to replace it with this 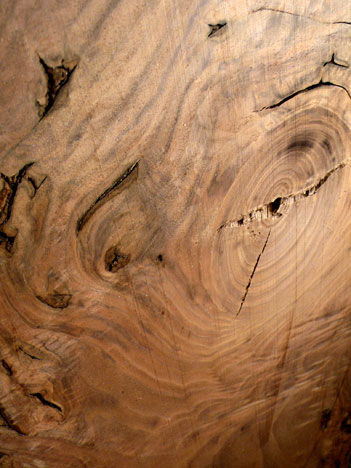 who knew you could buy slabs of black walnut on ebay. (well, obviously david knew . . .)
i admit, it’s pretty stunning. it’s going to look great up there. and hopefully then we’ll be really done.
as in fini.

ok, now that i have that off my mind, let’s talk about knitting.

first, i need to announce that anne at wooly wonka fibers is taking signups now for her 2009 Shakespeare in Lace Club. her Change in Seasons club was very popular this year, featuring unique, hand-dyed and artisan yarns along with fresh, new designs for each installment. the new club promises to be equally intriguing.

like i said, there hasn’t been much quantifiable knitting going on around there this week. i’m still feeling a bit jumbled in my mind from traveling, but also i’ve been working hard to systematically reduce the number of items on my to-do list.

i had several submissions i needed to get ready which required plenty of swatching and knitting but nothing to show for it really.. however, i did start a much-needed hat 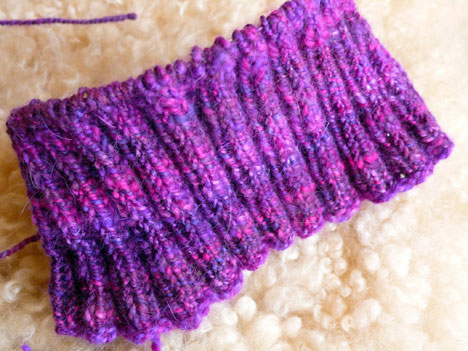 this is a nice, lightweight-but-warm hat which will have cables next time you see it. it’ll match the wiggle mitts i finished up recently. 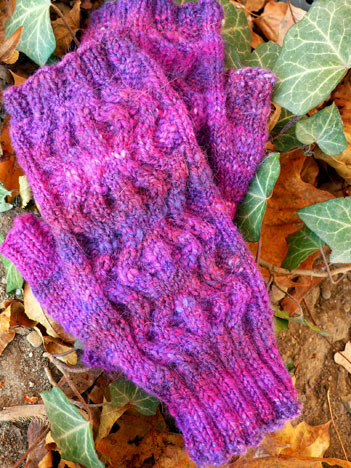 i just love this yarn from new hue handspuns . . . it’s truly soft enough to wear against my ears and across my forehead, where most yarns are troublesomely itchy. it’s so cozy; i’m gonna love having a hat in it.

i’ll need a heavier hat too, for the bitter cold months, so i’m thinking about starting that next. i tend to put off knitting for myself, so this year i’m thinking that if i do the ones for me first, then i’ll finally have what i need, instead of borrowing that old army-colored one from bin (army-colored hat + gray hair = bleccch).

i have some gorgeous nearly-black color blends from briar rose that i’m going to look at for winter hats and mitts this year, as well as some beefier sport weight yarns i’ve been saving for the same type of project. as we head toward deep winter and the holidays, i’d like to have these projects coming off the needles on a regular basis—someone always needs a hat or mitts, including me.

it’s nice to be thinking about denser knits and heavier yarns that wait patiently in my stash.

yesterday i got a nice box in the mail from norma, whose hilariously addictive blog is an absolute must-read for me (she writes every day, too). well, recently norma had a little fund-raiser for the red scarf project and the orphan foundation of america, two organizations that give a leg up to kids who are aging out of the foster care system and want to go to school or pursue careers (they do great work; please take a moment to read about it).

anyway, i won a prize in her fundraising raffle, which arrived yesterday 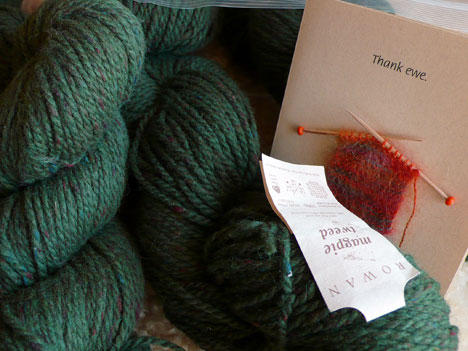 eight skeins of magpie tweed—whoa. that’s enough to make a really nice sweater.
and i love the color. thanks norma!

BTW, the red scarf project will be accepting scarves for care packages until december 15th. the packages are sent to college kids without families at valentine’s day i think. please consider sending a scarf (there are guidelines and patterns on the red scarf blog) along for this wonderful cause—kids really appreciate receiving the care packages. and if you’d rather forward a few bucks instead, that wouldn’t be at all unappreciated.

all in all norma’s fundraiser collected a whopping sum of somewhere near $8,000 which goes to supply kids with necessities such as postage, stationery, toiletries, snacks, and other useful items that are often priced out of a strict budget.

well done norma—thank you so much. 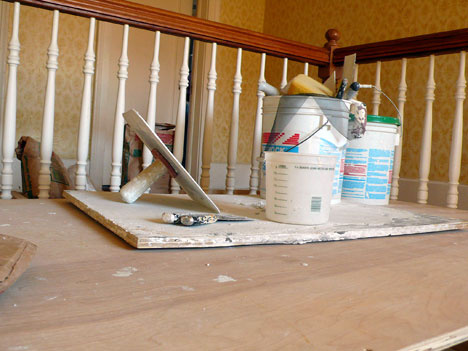 21 thoughts on “she’s a head-banger and plastered, too”