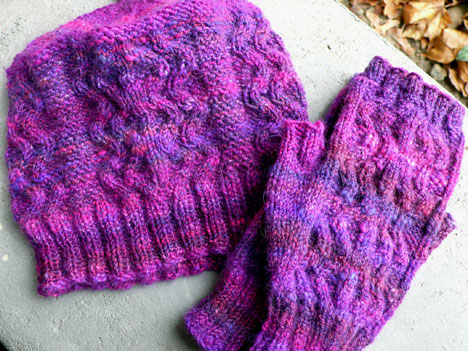 it’s a quickie project. just when you think it’s going slower than you’d planned, it’s time to start the decreases and from there it’s 1-2-3-done.

for myself, i knit the smallest of the three sizes i’d planned; it’s probably perfect for most youngsters. almost anyone else will need one of the larger sizes (if one knits to gauge). i’ll probably knit another in a bigger size to match the gray/brown tweed mitts, too—then i’ll have a nice set to give as a christmas gift. 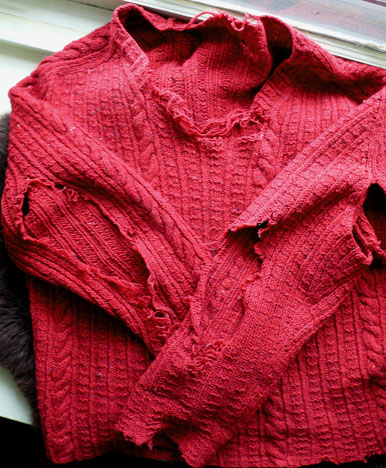 (and we laughed at its condition last year, but it was positively pristine then, compared to now. i think he’s clinging to the sweater it used to be—he keeps calling it his “after hours” sweater. i know—suave, right?)

i was skeptical about the heaviness, but i believe that people should discover their own folly in life, so i duly forwarded his thoughts to chris, who is always eager to help (she was dying yarn for her son; could she by any chance send some for david?? hehe). 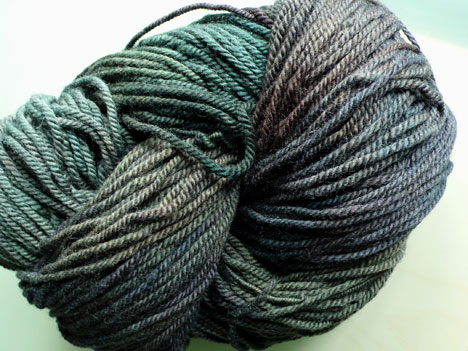 this is her robusta chunky/bulky yarn—it’s 100% blue-faced leicester, just like the yarn i knit my october sweater from, only fatter. the mail carrier just dropped it off; isn’t it great? david’s not here at the moment but i’m sure he’s going to like it.

so, he says he wants a “plain” sweater. of course he said that—he always says that. but does he wear his plain sweaters? not as much as the patterned ones i’ve made (i don’t go crazy with it; just enough patterning to keep me from losing my mind). so i’m going to have to pin him down on the design a little bit more.

i have time though—i almost certainly won’t start knitting it til december 1st (it’s sort-of a tradition around here to race the clock on the christmas sweater project), but i’m planning it.

before i even swatch for that though, i’m making myself another hat. and starting the new lace stole. today is the day—i can feel it.