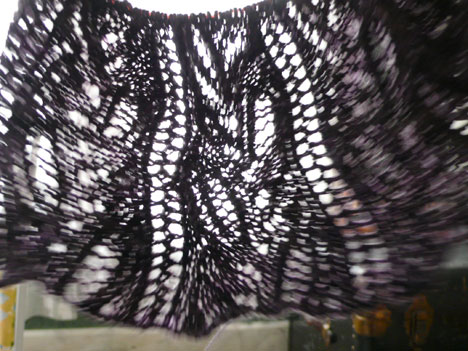 in searching for a name to describe or define my new lace stole project, i got into a conversation with jocelyn, the knitting linguist, about what one word would encapsulate the (rather long) list of phrases and mental pictures that i hold in my head regarding this design. and she brilliantly responded with a single word:

pal·imp·sest (pāl’ĭmp-sěst’): A manuscript, typically of papyrus or parchment, that has been written on more than once, with the earlier writing incompletely erased and often legible
(from dictionary.com . . .)

it was the perfect one.
i keep saying this project is about frost, but what i really mean is that it is about the apocolypse of frost—that which transforms my yard every november from a green living ecosystem to a forest of dry, skeletal forms in grays and browns, no less beautiful for their new state of being. 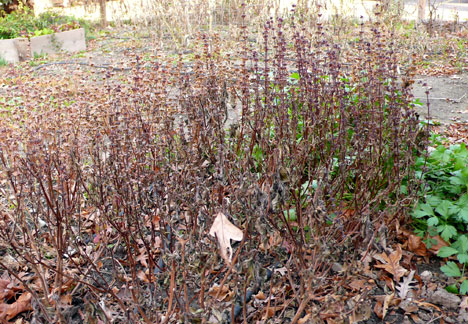 traceries of what the lilies and hosta used to be are etched against a sky that is heavily gray instead of blue. they have a stark, proud presence in beds stripped bare of what now seems like an embarrassment of greenery (but oh-so-fittingly cool in the month of june). 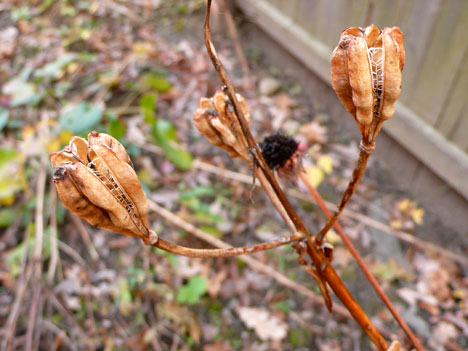 that heady green phase has been erased by frost and cold, replaced by new and interesting forms. their markings allow us to see through and around while seeing the very thing at the same time. windows of precious light replace heavy umbrellas of foliage we needed a few months back 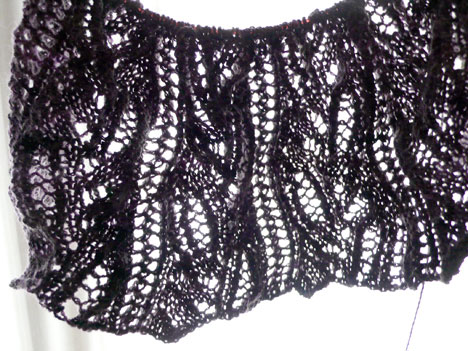 it is evening throughout the afternoon and night comes down early in the evening time now. within the shadows i can see a range of rich grays, blacks, purples, and browns that tend to hide from the flat, bright light of high summer.

i’m lucky enough to have received a yarn for the project that snares that whole post-apocolyptic feeling in its twists of sooty gray/black/purples and its lofty, airy weightlessness. it’s just perfect. 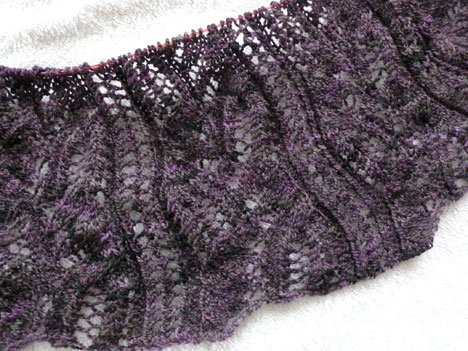 so yeah, workin’ away on the stole . . . it took me a while to nail everything down but i’m on track now. i even have a pattern in the works already—sometimes it goes like that; i struggle and wrestle and sigh for weeks over the development and then suddenly it comes together (as opposed to struggling, wrestling, sighing, and then tearing my hair out every step of the way through the pattern, too. cough).

my plan is to get a couple of chart repeats done every day at least (that’s 48 rows). this will be an excellent project to bring on our trip next week; i have it memorized already and i can do it while holding a conversation or watching TV. it might not be my favorite car knitting (that’s what socks are for) but certainly it’ll be great sitting-around-hanging-out knitting.

meanwhile i finished my socks and we just need to get some nice photos.
you won’t see those again for a little bit . . . but they’ll appear in my shop in early december, once the club kits have all reached their destinations. 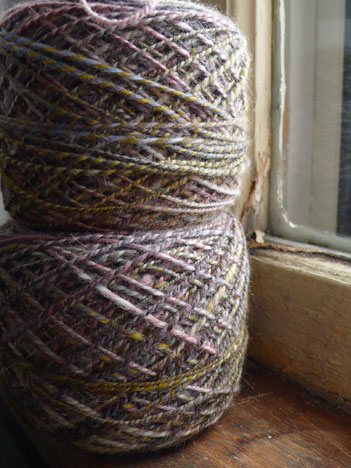 this is more bunny patch yarn from cheryl, in the dawn on the mountain colorway. now, normally i would feel a bit funny about using such a luxurious yarn for socks, but cheryl really wants to see some. and then the temperatures plummeted here and my feet got cold in that way that says they will not warm up ever again unless i knit them some angora/merino socks, so i caved. now i just need to find the right stitch pattern to showcase this soft, yumminess. 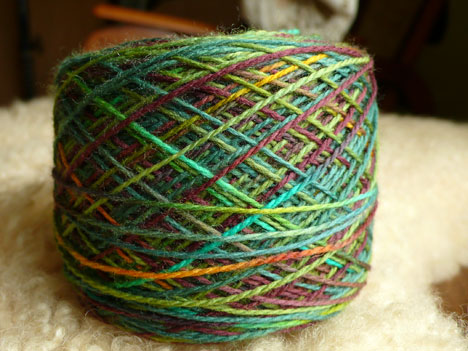 i also have this sock yarn from melanie at dye-namics!. it’s a long story how we met—let’s just say that helping my mom find bread in the bakery aisle at price right and running into a friend of hers from work turned inot a contact with a new-to-me dyer. got that?

we tried to meet up at rhinebeck but that plan went awry, so melanie mailed me this skein of her superwash fingering yarn in the forest dreams colorway. this yarn is the total opposite of what i was talking about above concerning the stole yarn—this is my i’m-in-denial-that-it’s-really-already-winter yarn. it’s got such happy greens and yellows. i’m not sure what i’m going to do with it yet . . . it might just turn out to be a plain sock, or maybe not a sock at all, or not socks for me. maybe its socks for a nephew who likes dragons . . . (i’m kinda liking that idea) 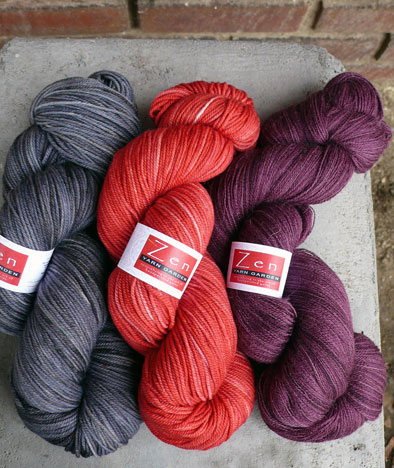 we’re going to work on a collaboration with the cashmere sock yarn for a kit roxanne will offer early next year. i can’t wait to get started—that sock will be the perfect thing to add to my arsenal of armor against the cold.

the best thing about these sock yarns is that they have some nylon in them. they don’t feel like they do, but they do, which is good; some of my sock recipients really can use something sturdier. roxanne also offer yarns without nylon but i’m really glad she has these.

i have so may disparate projects on the go right now that i think i’ll save a couple of the updates for today til tomorrow. my knitting is scattered all over the place and so are my thoughts about some of it. i finished the spiraluscious mitt, for instance, and just as i was weaving in the last ends, i thought of another way to knit it that i want to try before i commit to a pattern. so i think i’ll explore that tonight, then update you on the whole thing tomorrow (plus i have to knit my to repeats!).

i also have two new mitts in the works that i think you’ll like. it would help though, if i had them far enough along that you could actually get a sense of them. heh.

i’m plugging away on the wiggle scarf and i have to say, i really really love how soft and cuddly it is (again, thank you cheryl for this tempting yarn) 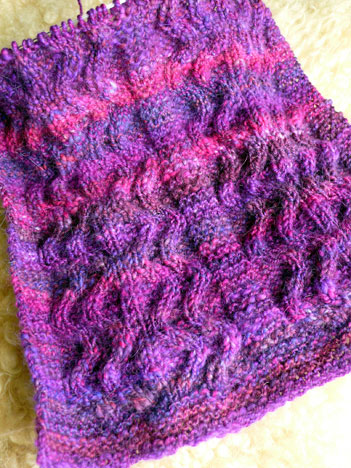 now that the socks are done, i can spend more of my late-night-TV knittng time on this project.

today i got a little package in the mail form deb that was not yarn . . . and it’s so pretty that i have to share it 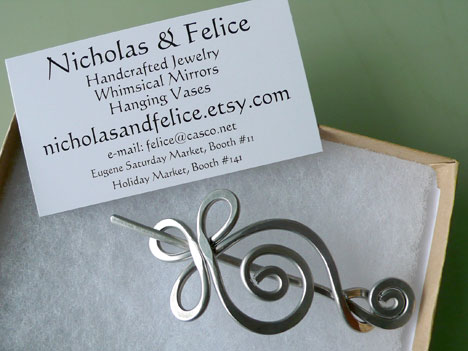 from nicholas and felice, a shawl pin (or hair clasp, if you prefer) that looks like a little puff of frosty north wind . . . it will look excellent with her yarn on the ice shawls, i think. thank you deb!

41 thoughts on “what’s left behind”