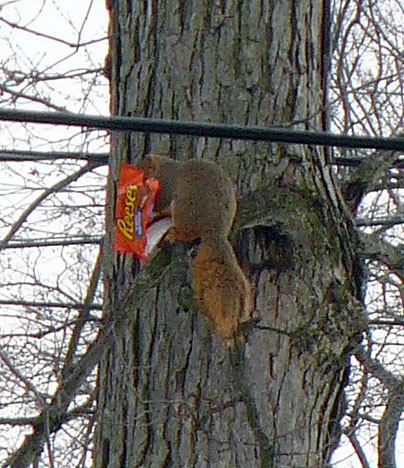 sometimes, you just gotta lick the wrapper, too.

wow, can i just say?? all weekend long i thought it was the 10th today. i just realized it’s not; it’s the 8th, and i’m SO happy for that (ok, well now it’s the 9th, but still—i have two more days than i thought).

monday is a day of classes for me, and today my afternoon group met at janet’s house for our annual christmas party get-together. her place looked so pretty 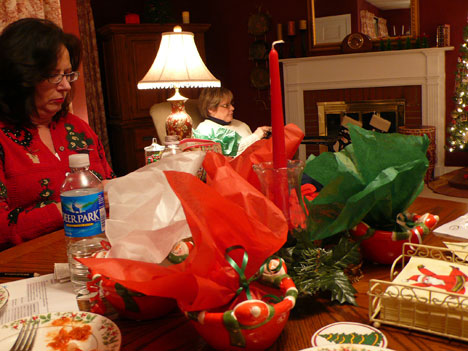 we knitted and laughed . . . and ate—janet made some delicious snacks and a beautiful dessert 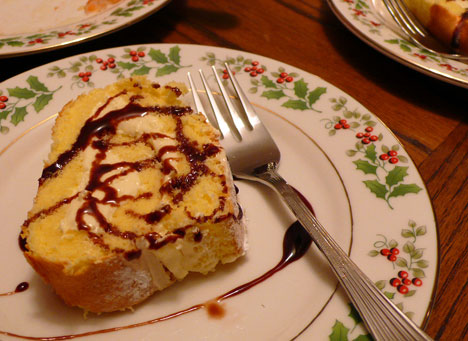 this is a class that has been meeting for almost five years together at this time; it’s amazing how the months fly by when we enjoy each other’s company so much.

i worked on the scarf i’m knitting for my mom and exhausted one ball of yarn; i’m almost halfway to the finish on that, i think.

yesterday i told you that i had a bunch of new yarn i wanted to share—while we were away over thanksgiving, the post office held our mail. then there was a mixup about what date to deliver it to us, and we ended up with a big boxful to go through on friday. so there is quite a concentration of yarn love here, but i think you’ll think it’s fun—let’s get started. 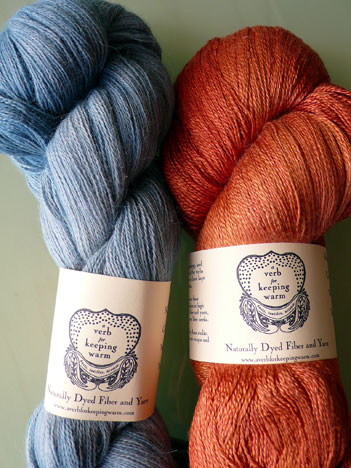 wow, that blue-gray alpaca lace yarn just about knocked my socks off when i saw it. i’m going to be mulling over that one for an early spring project i think. 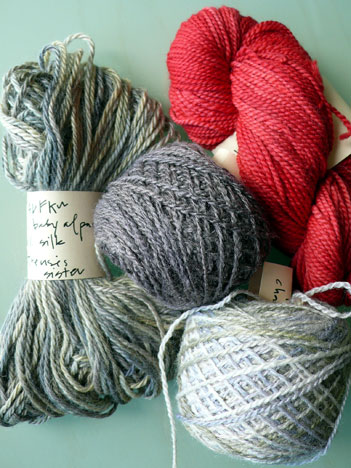 which look simply delicious. that one on the left . . wow; i love that.

kristine just opened a new workshop/retail space in berkeley that sounds great; if you live in the area, drop in and say hi—i’m sure she would love to show you her beautiful fiber and yarn selections.

i also got a package of goodies from miss babs, a dyer, teacher, and retailer who started carrying my patterns in her online shop a few months ago. she recently emailed to ask if i’d like to try some of her yarn, and i tried to fend her off—i really did (NOT; i’m a liar, liar pants on fire).

actually i went to take a look at the sock yarns in her shop and immediately zeroed in on her terracopper colorway. 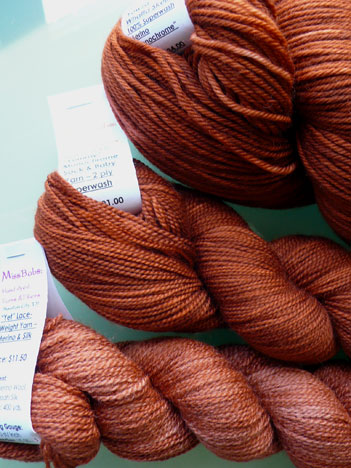 it really is terracopper, too. babs was nice enough to send it in three different fiber blends—you know, just in case. top to bottom we have whatta skein, a generously-sized skein of sportweight merino yarn. in the middle is yummy, a squooshy sock/baby weight merino yarn. and at the bottom, there is yet a merino/silk laceweight. all are soft and enticing . . . sigh.

then i had a package from cheryl, who found a bit more of the yarn i’m using to knit the wiggle scarf, and since she was sending that, she decided to add some bunny patch spinning fiber to the box. 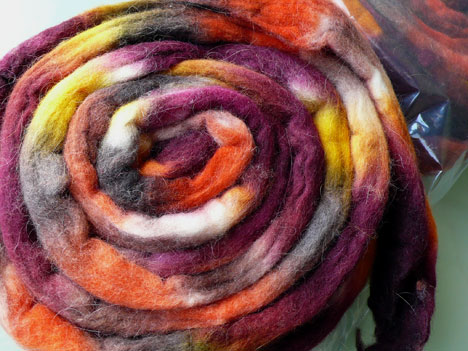 this is a rich colorway named damascus—it will be really nice to spin during the cold months after christmas, yum.

ok, now, are you ready for this? i saved the big box from kim at the woolen rabbit for last. i know there are a bunch of woolen rabbit fans out there and you should see what kim’s been cooking up in her studio. she’s got new fibers, new colors, and new excitement all over again. she said she was “dropping a few things in the mail” for me and when the big box arrived i grinned . . . that’s kim for ya.
inside, was what can only be described as a knitting orgasm—wanna see? 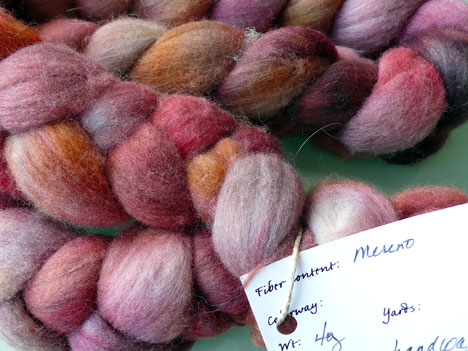 first there is a bundle of her ultra-soft merino roving in the sandra dee colorway—how pretty is that??

then there was the yarn . . . well, first let’s look at a yarn she actually sent me a little while back that i haven’t told you about yet. 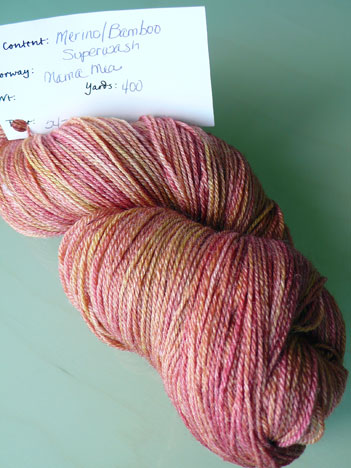 she’s got the bambino thang goin’ on over there now and wow, it’s almost edible in this mama mia colorway. 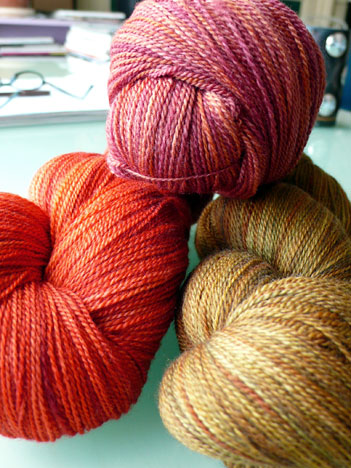 then there is a trio of whisper merino lace, in (clockwise from the top) chiquita, oakmoss, and new england red. we’ll be using these colors to knit the faroese version of the autumn arbor stole in january. i can’t decide which one of these i want for mine . . . i’m leaning toward the burning embers . . .

then i pulled out these two beautiful skeins 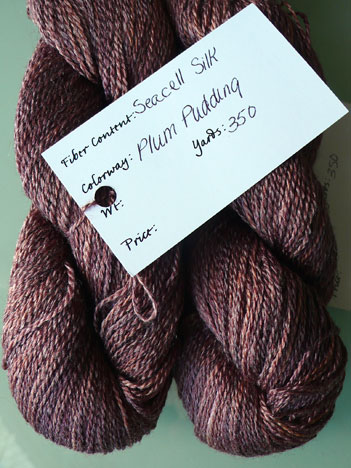 this is kim’s seacell silk which is not available in her shop just yet, but which she talked about on her blog the other day. mmm, it’s gorgeous—soft, with a sheen and feels like it will have a fine drape. i’m eager to try it; i haven’t knit with anything seacell yet, and i’m curious about its properties. 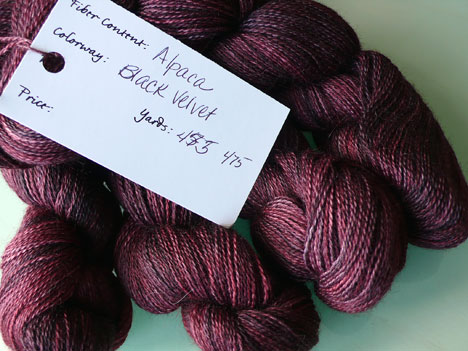 ok, now this one should just be illegal, right?? it’s the incredibly lovely tranquilo alpaca lace yarn in colorway black velvet. the fact that it shares a name with both a whiskey and a dark chocolate cake does not escape me—it’s at least equally sinful.
kim searched for some time this year to find just the right alpaca yarn base; we had several email conversations about what makes or breaks an alpaca yarn. one thing we both agree on is that alpaca yarn with lots of hair just doesn’t cut it. and as you can see, she patiently located a nearly-hairless yarn that takes dye beautifully and is seriously silky. that’s why we love her.

and just in case i was running low on sock yarn, kim lovingly folded a skein of her harmony sock into the last possible space in the box 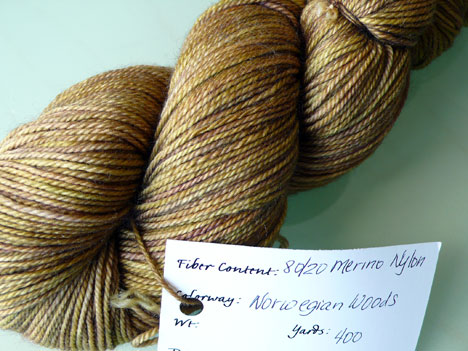 that’s the new norwegian woods colorway—kim and i share a love of greens and foresty colors.

wow, i think i need a cigarette after that, whew.

and with that i think it’s time i went on to the next piece of work; we have another mitt/hat set to release and i need to prepare it. so if i’m going to get any knitting done tonight at all, i better shove off—there are a million things to do around here.

31 thoughts on “yarn parade and a party”