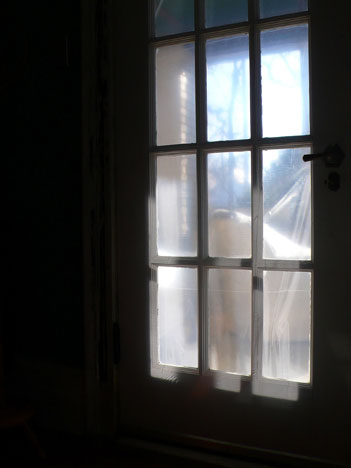 this morning i opened my eyes to the feeling of a foreign presence in my room, which at first, was troubling in its unfamiliarity. why were my eyes so uncomfortably squinched up?
there was a sort of visual cacophony going on, but without the sound—what the heck? 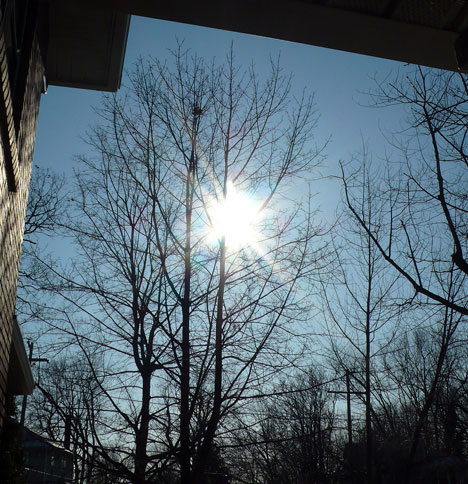 oh.
i mean, oh my.
i tried to calculate just how many days had passed since we’d had sun last, but i came up empty. i really cannot remember. but i’m happy we have it today. all day. this wasn’t one of those ohio jokes where the sun shines brightly for all of, oh, 15 minutes at 10 am. no sirree, this has been a day full of sun. 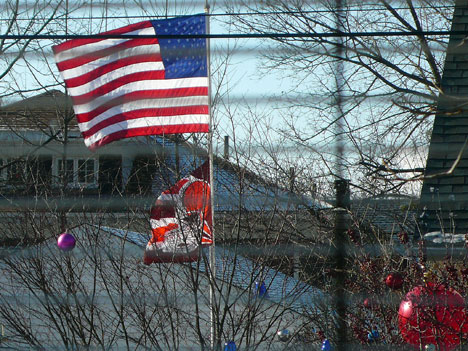 brett’s flags are flying straight out most of the time.
and cold—the temperature has dropped eight degrees just since i sat down to retrieve my photos and start writing (about 30 minutes). it was 26 when i got up this morning and now it’s 11, and that’s with full sun all day. brr.

but it’s so pretty, who could complain? 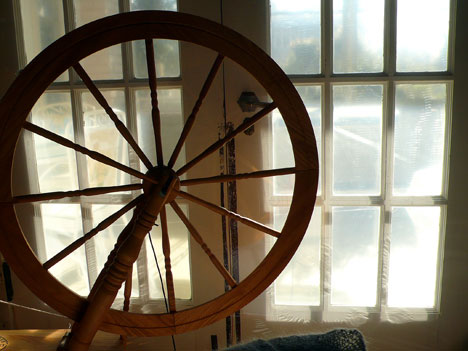 we had spinning class this morning, as usual. anne marie brought cranberry-orange muffins, mmm. i worked on my briar rose BFL 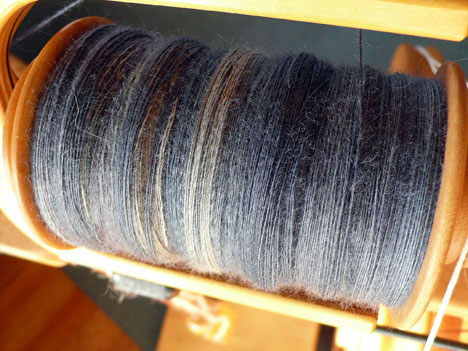 i’m almost done with the first one-third of the fiber (that’s sort-of a warning that this project is gonna take a while). linda’s been working hard on drafting more evenly with the merino top she’s spinning (she getting bumps and too-loose spots in the plied yarn). we talked about adjusting the length of her drafting zone to accommodate the shorter fiber. i think one of the most common ruts newer spinners get stuck in is to treat every fiber the same, whether due to success using a technique in the recent past, or because it’s comfortable and they long to be productive.

the truth is that almost every batch of fiber requires an adjustment of technique, but we can pretty much count on having to make shifts when working with fiber from a different breed entirely. in time we learn that this is actually the long-term enjoyment of spinning, but at first, it can be frustrating or, as in linda’s case, she just didn’t really know to explore it that way.

sometimes just a small change in handling can increase consistency a lot. though top does not have twist added during processing, it will tend to twist a bit on it’s journey from the basket or bag to my hands. i find that when working with top or sliver, it must enter my back hand with no back twist (not even a little) to be ready to pass into the drafting zone, or the front twist (the singles) will want to grab the fiber in “lumps”. the straighter i’m able to keep the fiber as it moves along, the easier it is to keep the spinning consistent. it’s not such a problem with woolen preparations that i can tell, maybe because the fibers have a lot of air between them and don’t tend to lump as easily.

since at the moment we’re all spinning with top, everyone went home today with that to think about and practice with. i also asked them to visit abby’s blog to read a couple of fascinating articles about plies and spinning for a purpose (click the links to the reference articles too).

it turned out though, that this wasn’t linda’s only problem; on closer examination, we found that her bobbin wasn’t turning freely on the flyer shaft because the little plastic grommet on the end had gotten misshapen a bit. geesh. just goes to show that sometimes the equipment is at fault . . .

after they left, i took advantage of the beautiful light today to take some photos. first i dragged david’s christmas sweater over near the window for a picture 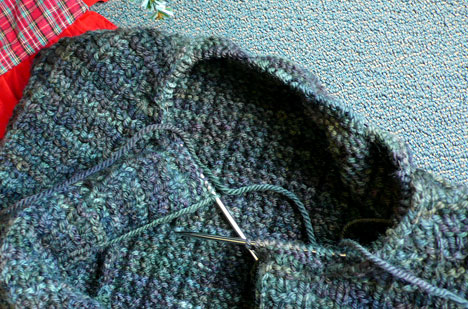 the sleeves and body are done and i’ve got the collar on the needles. i think i’m just barely gonna squeeze it out with the yarn i have left. i hope so, because then i can work on sewing everything up while i wait for the extra skein to arrive from chris. once i have that, i can knit some pockets for it.

while i was over there with the sweater, i hung the new ornament anne marie gave me on the tree 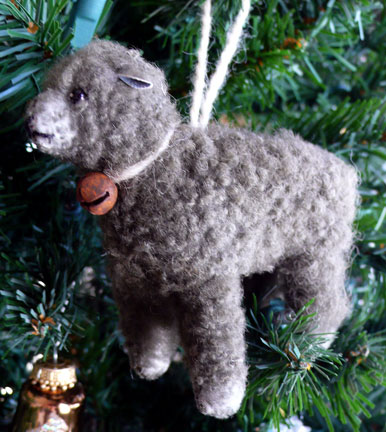 isn’t that just adorable? the bell actually rings, too.

i always think the tree couldn’t possibly hold one more, and then i see a good spot. i took a few minutes to reminisce over the ornaments. i have ones that go pretty far back—i’ve lived on my own since my first year of college. 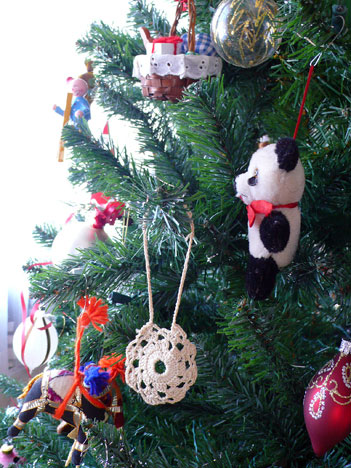 a few readers have already commented on my kliban cats; those were purchased for my first tree, in 1978, when affordable was the key decorating concept. 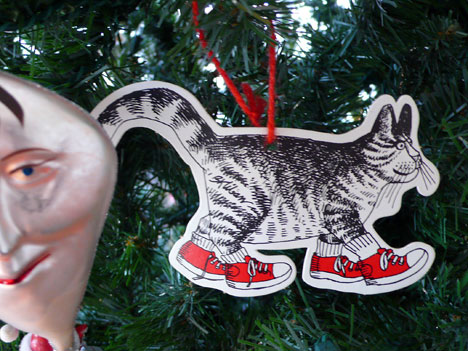 there are five or six different cardboard klibans, each cost probably 25¢ back then. my favorite is this maniacally grinning st. nick. 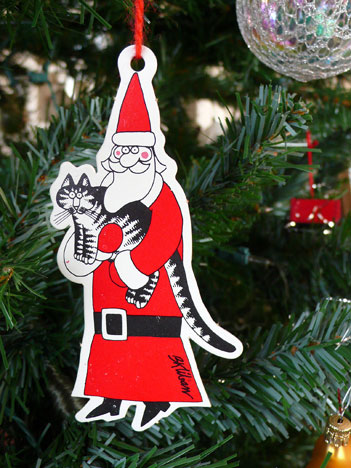 (bartender, i’ll have whatever he’s having)

the next year my cousin’s 8-year-old daughter brought me some handmade ornaments from school. she used to visit my apartment several afternoons a week and i taught her to knit a bit 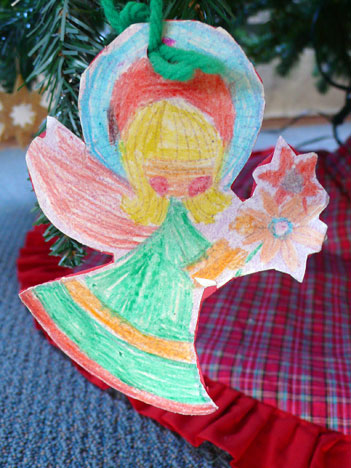 i was so touched to receive them and worried that they wouldn’t last long, but here we are using them almost 30 years later. she has children that age (or older) now . . . 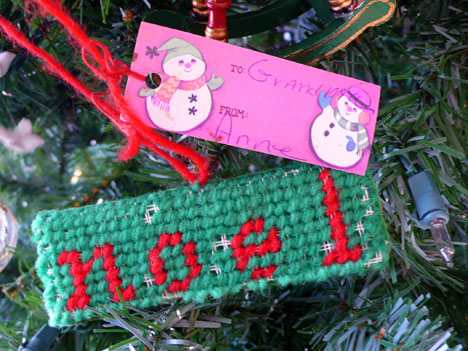 i know for sure this was my very first attempt at needlepoint—my favorite part is the stained-but-intact gift tag, written in my mother’s hand, with those groovy 60s snowmen waving away on it. i must have been young enough that my handwriting couldn’t fit on the card . . .
i inherited this back when my grandparents gave up having a large tree and asked me to take their ornaments for my tree.

i’m still working on socks late at night, though i know this pair won’t be done for christmas gifting 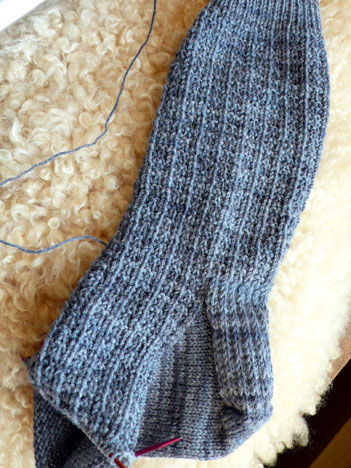 but i found an alternative gift for my nephew: i took the tesserae from my brother’s birthday pile to put in my nephew’s christmas pile, and i’ll put the new blue pair in my brother’s pile to send in january.

i worked a little bit on the second lacunae sock 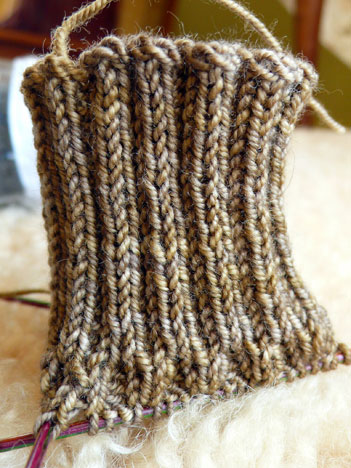 but truthfully, only because i really needed a change. that’s enough break though—i have a sweater to stitch up.

23 thoughts on “a strange and glorious spectacle”