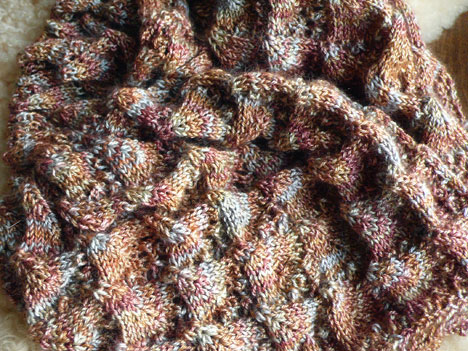 (sunday, 10 am)
just look at those yummy cocoons of cashmere-y goodness. they look innocent, but they’re not. not quite.

(monday, 2 pm)
i mean, what could look sweeter or cozier than a cashmere shawl sprawled across the living room floor? trust me, it’s a pose—it’s really there to suck me in, like the sucka i am.

i meant to work on other things these last two evenings, but my complete addiction to this project got the best of me. it’s over now, though. 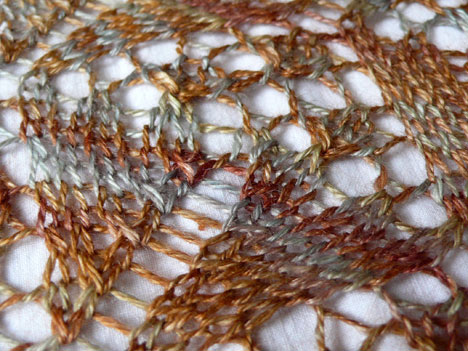 really. it is.
(ok—the truth: i just plain ran out of yarn)
but can i just take one moment point out to you the gorgeous sheen and soft halo on this hand maiden yarn, and the way the colors play across the fabric? i’m desperate to try it on and feel it against my skin 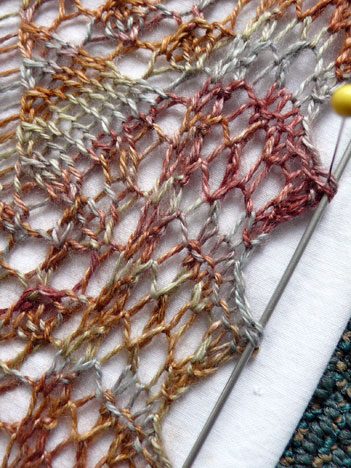 but that’s cashmere for you—it dries slo-o-wly, just when you’re panting for it to go faster. 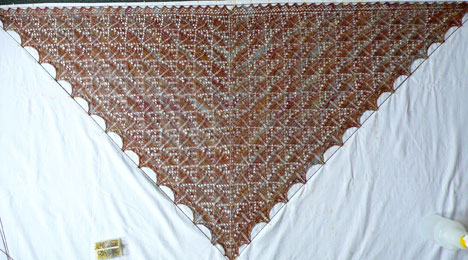 ok, that’s better. now, how about a name for this baby?
thank you for all the wonderful suggestions—it’s been really tough to decide. i know a LOT of people liked the name tussie-mussie, and it’s appropriate, but somehow the words just don’t sit right for me.

then one suggestion jumped out at me simply because it described the feeling of the yarn so well (it’s got a dangerously rich, buttery, caress). it was maryann b. who suggested “embrace me” and that one hit me as the one.

so off i went to google and search on ravelry, but lo and behold, that name has been used quite a bit (but i also like “caress” as an alternative). so i went to my favorite language translator to look for variations and came up with two choices: caricia (caress) and embrassez-moi (embrace me).

still waffling over which one i like better . . . wanna vote?
here, lemme give you something to help you concentrate

i did get some charting for the new shawl squared away but want to wait to show pictures of it till i have something substantial for you to look at ( i am loving the orange, though). 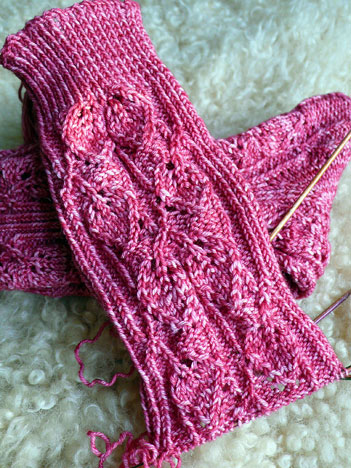 friday night i got my second bougainvillea sock all the way to the start of the toe shaping before i went to bed. on saturday morning i sat down to write the pattern and sat . . . and sat—it just wasn’t working out on paper. i had sock #1 right there and it looked fine (and i know it knit up ok), but what i stared at on-screen didn’t make sense any more, according to what i was doing on sock #2 (which i was knitting exactly the same way).

heh. i ran up to get my sock-in-progress, brought it downstairs, counted stitches and looked it over carefully several times before i finally saw it.

it wasn’t the same at all.

while working on it in the airport i somehow moved one stitch in the wrong direction before i started my heel flap. that resulted in the heel pattern being two stitches off-center, which in turn, caused the foot to be asymmetrical. that’s bad enough, but not the worst part, even—what’s really bad is that i proceeded to knit through the heel and down the whole foot without noticing, like i was high or something . . . oh wait—hehe, i was.

i’m blaming it on cashmere fumes. it’s just like your mama said—that’s dangerous territory and if you touch it, you’ll go blind.
another reason it was a very good idea to finish that schmata and lock it UP where it can’t harm anyone else.

i was so mad at myself that i started another sock saturday night just to calm my nerves and distract me from my own stupidity. 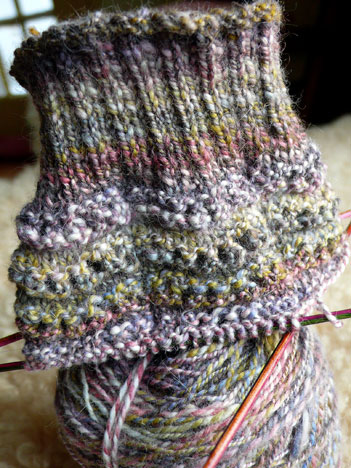 (don’t think i’m completely unaware that i’m trading one dangerous fiber for another here—i do, but like any good addict i can justify it. somehow)

anyway. this is the sock for this yarn i think, finally. you might remember this yarn in its previous incarnation as a poppy sock which i waffled over for a good long time before finally deciding to rip out. yes it was ok, but i thought i could do a better job showing off the yarn to its best potential.

i like the new one a lot better—the color transitions are more muted and the little wave in the motif enhances them. it’s another variation on a feather and fan pattern which works up quickly and easily, making the sock another good traveler.

ok . . . i’ve put myself on a bit of a schedule and i’m trying to stick with it in order to catch up and to fit in another activity that’s been on hold for way too long. 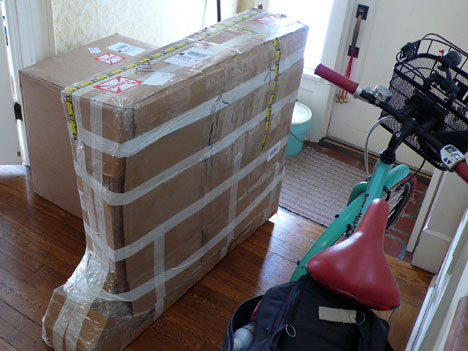 here’s a clue: it involves whatever is inside the box that arrived the other day.
(don’t forget to vote on one of the two names!)