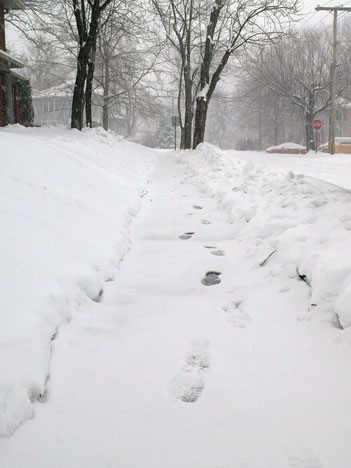 we are very lucky that our house was built on a double lot all those many years ago—it offers some really nice perks, such as a distance of more than 15 feet from our neighbors windows, an open area to have the garden each summer (which we now feel we couldn’t live without), and plenty of space left where tall trees can grow to shade the house in summer so we can forgo air conditioning.

there’s just one drawback to all this which comes to mind: double the shoveling in winter. and today, we’re in the midst of a real doozy of a storm.

our property is an oddly-shaped peninsula at the end of our street; because of the backstreet that runs behind, it’s not very deep but it is very long streetside, with a lot of sidewalk trimming the edge. since our mail carrier delivers on foot, i feel it’s only fair that i get the stoop and walks cleaned early. 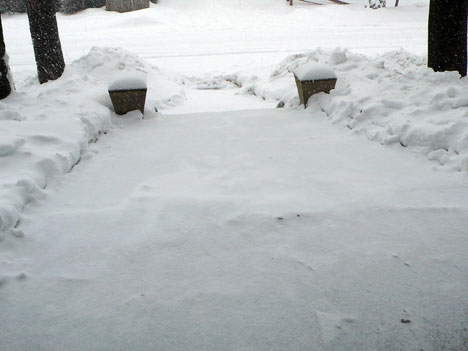 i like shoveling actually; it’s a good chance to chat with the neighbors and get some fresh air. of course there are days when i wish a thousand shoveling faeries would descend on harvard avenue out of thin air to make the snow disappear—it isn’t always convenient to drop everything and shovel. but in general, i like getting the exercise (today it was a strength workout; this snow is dense, wet, and heavy).

i’ve been smiling that so many people think i’m going to be weaving now (you know—in my copious free time). while i admire weaving greatly and wish i enjoyed it more, i’ve never seriously gotten into it. i really can’t take on another thing that i can only pay a little attention to. but, maybe some day . . .

no, the big box that arrived the other day contained something completely un-fibery and very mundane in its own way 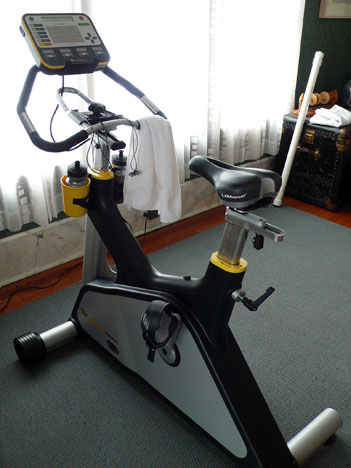 i’ve been wanting an exercise bike for years to use in bad weather. ever since we moved to ohio, where week-long bouts of bad weather keep us inside too often. david always poo-poo-ed these things, preferring to ride on his set of training rollers. with my balance, that option is so dangerous that even david had to agree we needed another option. i tried using my regular road bike mounted on a resistance training stand, but it was killing my back.

finally, i rebelled (haha, like that’s a new turn of events).
i don’t care anymore if my exercise bike takes me down a peg in david’s estimation. honestly, this winter has broken me. and it’s not like i’m training for the tour de france or anything (ha-HAH-haha!!).
it’s been almost impossible to get outdoors even to walk regularly since thanksgiving; i need my endorphins, dammit (david won’t argue with that).

today though, the shoveling may have sufficed for a workout. 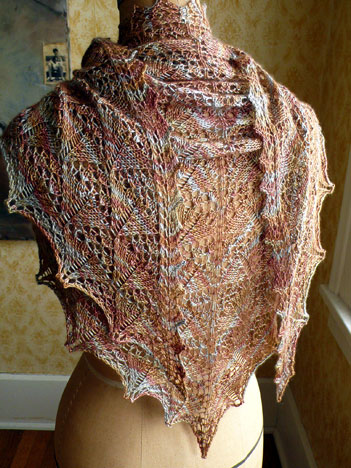 caricia it is.
thank you all for letting me know your thoughts on the name; i appreciate it. with the heat running pretty briskly this week (you know it’s been damn cold when you glance at the thermometer and say, wow, look, its 21!!), the shawl was well-dried by yesterday morning so i draped it on the dress form for a few photos. we’ll do real modeling shots in the next couple of days. rachel has the pattern for proofing now so we should be all set to release it pretty soon.

in the meantime, lis at one planet yarn and fiber has put up a listing for anyone interested in preordering a shawl kit, which includes the yarn used here and a copy of the pattern. there is a link in the listing to views of a few more photos as well. 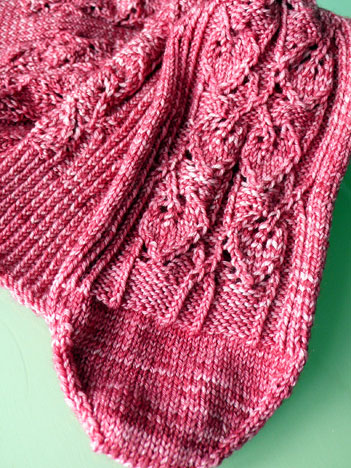 bougainvillea socks are done—got those back on track monday night and did the toes last night to finish, yay.
to recap, these socks are a design for the first installment of the dye dreams four seasons sock club, and are knit from their new dream sox merino/nylon blend yarn (which is yummy). 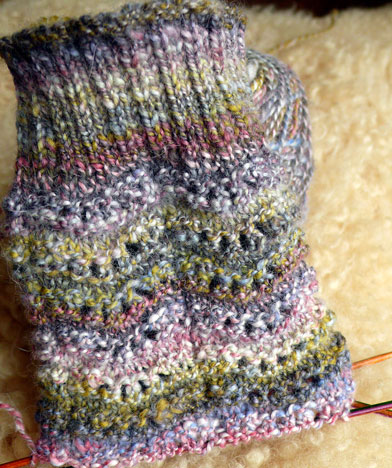 it’s really time to get these done so i can take advantage of the angora content.
(omg, the amount of snow coming down is starting to freak me out a little, heh)

after this sock i think i really need to start a little scarf—i’m jonesing for that sort of project . . . maybe a little nothing is in order. too many socks make jane a dull girl.

now it’s no use having a all-day blizzard if you don’t spend at least part of it curled up with a good audiobook and some knitting. since i still feel sorta wet and chilly from shoveling, i think i’ll grab a shower, put something good in the oven for dinner, and spend the rest of the evening doing just that. 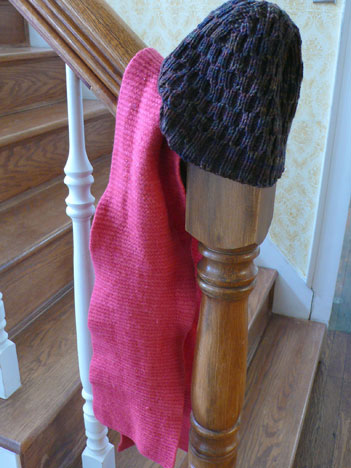 39 thoughts on “the long home walk”