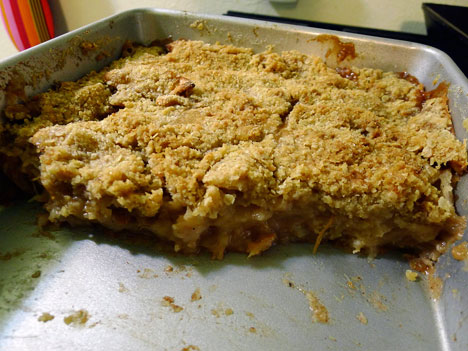 that ina garten, she sure writes a good apple crisp recipe, mm-mmm. especially the apple part, though i do think i like my friend chris’s recipe better for the topping. next time, i might marry the two and see.

so now that we’re settled with our apple crisp, let’s get down to the business of what yarns i’m playing with and what’s on the needles. cuz there’s a LOT to see right now and i’m not even going to get into the three secret projects i’ve got going. i gotta tell, you, this staying home stuff is really good for my productivity  . . . 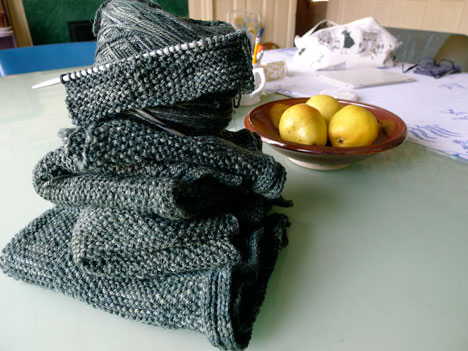 i am honing in on a finished bloch ness cardigan—i’m so close i can taste it. this is my pile of sweater parts on monday, when i had just begun work on the last front piece. don’t they look luscious? the polwarth silk from indigodragonfly just gets better and better; i can’t wait to actually wear it.

this morning, my front piece is just about ready for the armhole bindoff

sweater knitting goes so fast when i actually stay home to work on it!

but i’m especially motivated to have this one off the needles; in recent months it’s become increasingly clear that for now, cardigans are the only practical sweater option; all my pullovers are migrating to the back of the drawer until my climate control issues even out. but i miss the variety of choices i’ve grown used to, so the minute this sweater is done it will go directly into circulation. and a good green sweater will be so useful for my wardrobe. yay.

also, i want to get this done before i become absolutely swamped with holiday knitting (the fact that i don’t think i’m there yet should indicate how much of a crisis this could turn out to be).

i’ve been working on it late at night, when we settle in to watch TV for an hour or two; that’s the time when i knit on something fairly mindless until i can’t keep my eyes open any longer. when david has a project going, he works on it then, too; that way, i’m nearby in case he blunders. 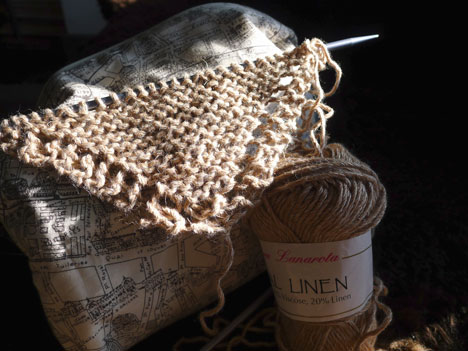 as you know from his post-thanksgiving essay, he’s working on a washrag—isn’t his knitting nice? he got pretty far with it on thanksgiving day, nearly to the widest point. but last night when he took it out, he thought the fabric seemed too loose (he’s picking that up from us!). so—and i’m so proud of him for this—he ripped the whole thing out and started over. it’s only his third knitting project, so i especially admire his willingness to redo work he isn’t crazy about.

the yarn he’s using has been in my stash quite a while; it’s a linen blend gifted to me by rosi g, specifically for knitting washrags. the linen content makes it very hardwearing. i used one skein and kept the other back; now david is enjoying it.

i think he’s going to make a little series out of these; he enjoyed working in a pattern when he knit an afghan square for kat j recently and wanted to try using more patterns in washcloth squares. and well, we’ve got plenty of resources he can mine for this venture . . .

i’ve started several new projects, some of them secret, but one that is NOT secret and that i’m super excited about is a new cowl/infinity scarf project in two delicious yarns. cuz really? there’s no point in putting something near your neck if it isn’t luscious. it is also stupid quick and easy to knit; my favorite kind at this time of the year.

ok, here’s the swatch front—i love how it scrunches up all by itself 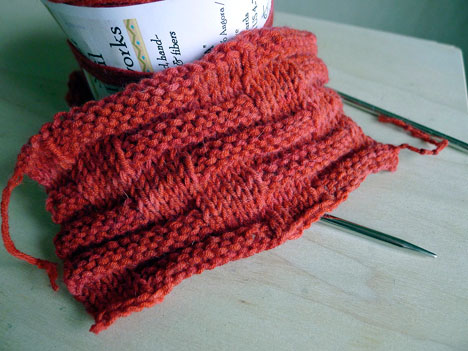 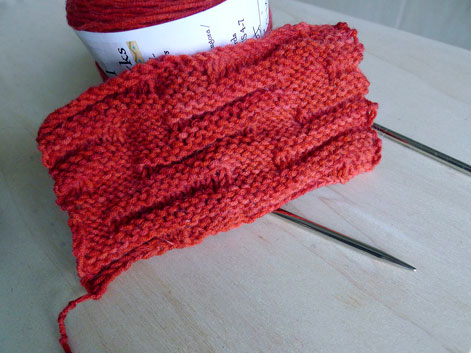 great texture contrast for the loops of that infinity scarf (or for putting either piece on in the dark).

(WHY did i say that, because we get dressed in the dark so often???) 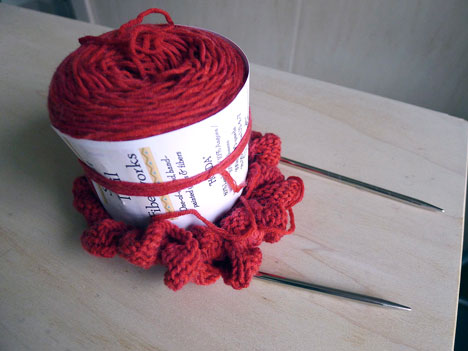 i’m knitting the infinity version in this awesome red holda, from spirit trail fiberworks. the colorway is named sorbet and it’s a red i just adore; i think of it as the color of faded red sneakers, but you could say it’s kind of a watermelon color (it’s less orangey in real life than it looks here; i’ll try to get a better photo as the project progresses.) 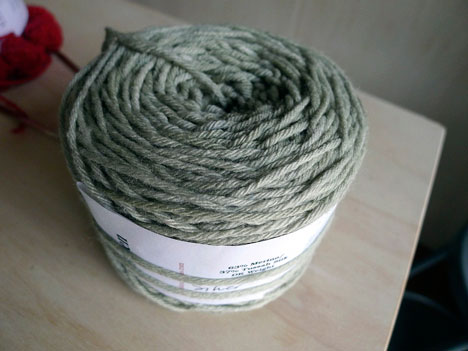 i’ve cast on the shorter cowl version in a different scrumptious yarn from shalimar yarns called haven. it’s a 5-ply merino/silk blend that has a similar hand to the holda yarn—drapey but plush, with great body. 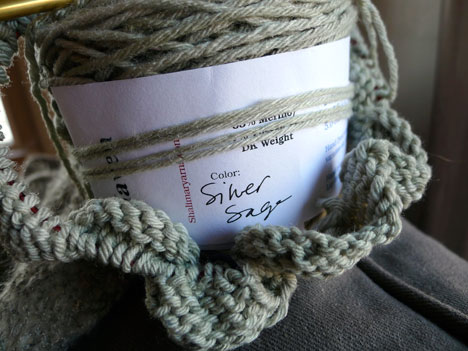 i’m knitting with the silver sage colorway here; it has subtle gray-green tones which i find entrancing. and shalimar has a wide array of additional color options. the haven is just a tad thicker than the holda, so i went up one needle size and the fabric seems perfect (though i can expect the result to exceed the garment measurements).

the other day, i finished the cowl i was knitting with that gorgeous handspun baa baa huey from newhue handspuns.

david has been eyeing this piece ever since it began to take shape. he reaches over to squeeze the fabric every so often, letting me know he plans to make it his (i’m letting him sweat but in truth, i’ve had it earmarked for him ever since i first laid eyes on it. it’ll make a great christmas gift.). david’s favorite kind of yarn is handspun; in a sea of choices, he will gravitate straight to it.

while we were playing dress up with it, i had david try it on his head so i could get an idea of what modifications might be needed for the hat. 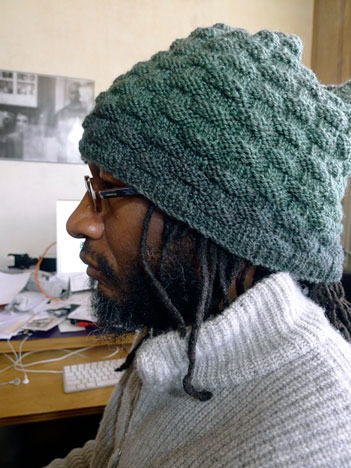 okay, first—even i can’t believe that giant cowl fits his head! (david is the reason that all my unisex hat patterns go up to size 26-27 inches). i’m glad i put it on him though, because it made me wonder about making an entire hat in that texture. after a bit of discussion, we decided that the bottom part should be basketweave and the top part should be the underlying rib pattern. i’ll keep you updated on the design. 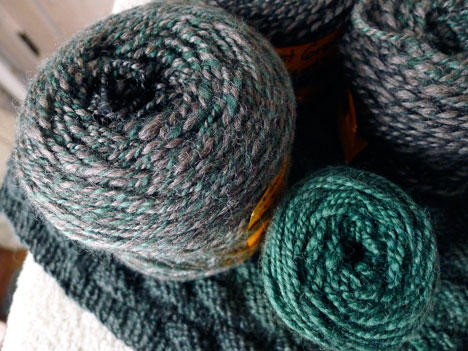 i got out the hat kit and cast on the other night. i rewound the yarn so that the darker portion was at the outside of the ball and i could start with the lighter portion. i worked a narrow ribbed edge in the plain green yarn (right), then started the basketweave pattern in the shaded colorway.

now i’m doubting my choice though—i think before i get too much more invested, i’m going to rip back, rewind the yarn back to where it was, and start with the darker end, so that the ribbing blends a little more subtly.

the hat will have a somewhat different look than the cowl, because the hat and mitt kits are spun with some dyed fiber and some natural fiber, making the colorway more tweedy. they will coordinate perfectly with the cowl, but will have their own look.

ok, that’s where i’m going to stop for today, but i have more already lined up for next time—several projects i have pulled yarn for, but have not started yet and which are poised to go on the needles when that sweater is done.

til then, happy stitching; don’t let the holiday rush eclipse the joy of having a great big excuse to sit and knit.

17 thoughts on “fits and starts”