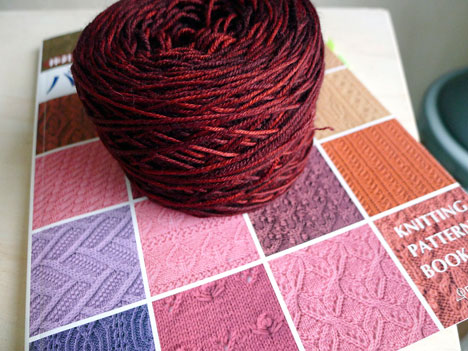 like all the things i am getting started late on, the traditional december red scarf is behind schedule. but fear not—there will be one.

the yarn i’ve pulled is this delicious vampire red 8-ply merino sport from skeinny dipping, appropriately named crime scene. yum. christine is still  dyeing this colorway, but tells me she is now working with a different sport yarn base, so we put our heads together and decided to switch out the sport weight for worsted weight. she’s dyeing the yarn today (or maybe yesterday) and i should have it shortly.

and as it turns out, i may not end up as far behind “schedule” on this as i imagined—i dove into the archives to see when exactly i did start last year’s red scarf and it looks like it was november 28, 2011, because i blogged about it on the 29th. ok, so i guess i’m not behind??

hahaha, can you tell i’ve made a life of working right up against the deadline?

the actual drive to collect scarves may be over for this year by the time i finish it, BUT the main point of this project is to create a scarf pattern from which we can dedicate december sales proceeds to foster care to success, under which the red scarf project operates. last year, we raised enough to form a $2500 scholarship—go blog!

it’d be a crime if we didn’t match that effort this year.

another crime—not finishing up this adorable sticks and stones baby sweater, knit up in briar rose nate’s sock yarn.

it’s been sitting in the project bag for a month, ever since i left rhinebeck. i didn’t take it to NYC because i needed to trim down my baggage. and then one thing led to another once i got home, so here it lies, needing neck trim and front bands. that’s it—it’ll be finished once i put those on and sew up the underarm seams.

basically, this little guy is my swatch—it was small enough to knit very quickly with one big skein of yarn and yet had all the parts i needed to make sure the adult sweater design would translate well and the shaping would work.

now it’s time to make a couple of bigger ones and silly me, i think i can do it by christmas. haha. in fact, if i could knit them before we leave for las vegas on december 18th, that would be ideal, since we are going there to visit the recipients and it would be best to have them done and dusted when we get there.

i’ve got two batches of chris’s new yarn, which is the same weight and texture as the nate’s sock yarn, but with 10% mohair added, giving it a soft sheen and nice hand, but not enough to make it fuzzy or prickly. the coppery colorway above is for micah’s smaller sweater and i have a big batch of blue as well 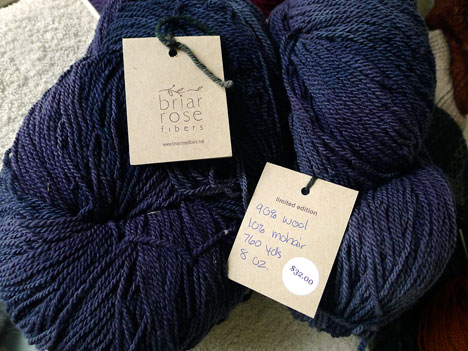 which is amad’s favorite (i can’t believe amad is big enough to need a sweater that takes one and a half of these giant skeins!). he’s gonna flip when he sees this color—blue is his absolute favorite.

chris isn’t listing this yarn yet on her site (and it may end up as simply an experiment), but nate’s sock is interchangeable with it and chris has lots of that to choose from.

i finished up the knitting on my bloch ness cardigan two nights ago, so i am ready to start knitting the boys’ sweaters. i think i’ll go wind my yarn now; i’ll be back monday with updates on all the christmas projects now in play.

til then, happy knitting!