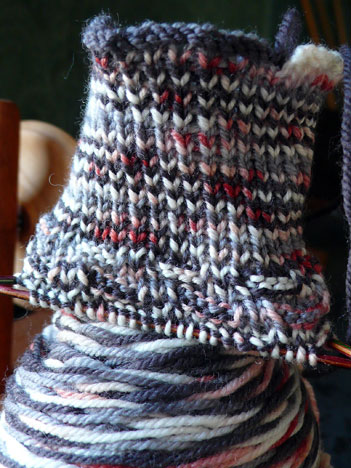 this is my traveling sock—the one i keep in my tote bag near the door, which i take with me on any trip where i might need to sit and wait for a while, or where we’ll be in the car for a bit. its mate was almost entirely knit on our trip to albany in february. when i finished it, i cast on for this one immediately and . . . obviously, it hasn’t seen much action.

and not because i don’t love it—i DO. the yarn is just amazing; it’s zoe sock from shalimar yarns, a beautiful 3-ply with a soft, sturdy feel which knits up to a springy, even-textured fabric—just lovely. and it feels great on the foot.

but since i started sock #2, i’ve probably been out maybe three times when i could work on it (since i work at home, i really don’t have cause to go out in the car that much). it’s nice that i have the chance to rediscover the fun of this yarn and pattern every time i pick it up, but i should probably finish the sock—i have exactly one pair of man socks on the shelf and the giving season is just seven months away (we start in november with anniversary socks). this will definitely be going along to the loopy ewe spring fling with me—i see plenty of potential here for plane knitting.

so what’s going on around here . . . hmm, well it has warmed back up and today promises to be outdoors-worthy. i’m definitely pumping up the bike tires and getting out there this afternoon. 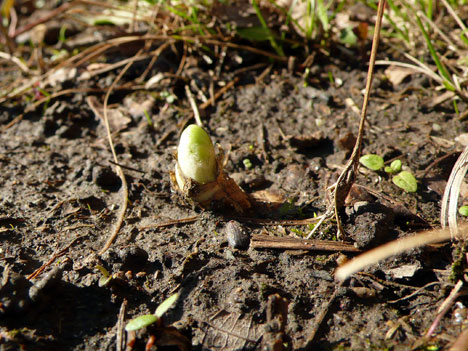 the snow did not stop the force of spring bustin’ out all over and once it melted, there was even more new growth popping up from underneath. this is the may apple—doesn’t look all that exciting now, but just wait til you see what that lil bud turns into. it’s one of my favorite transformations.

this isn’t a great photo (i had to stand in an odd spot on the edge of a window well to take it) but i was really surprised to find lily of the valley up and budding already today. this is just a little patch near the warm brick that happens to get more sun—we’ll have lots more in a convenient photo location in the coming weeks.

anyway, indoors i can’t seem to find all that much knitting to show you even though it seemed as if i did a lot of it over the past couple of days. weird . . . 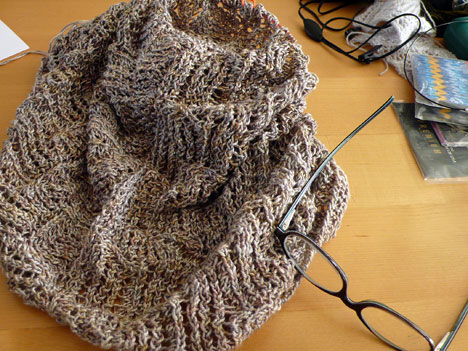 trevi is growing but it looks the same as it always does—a blob. i’m waffling over where to stop—according to my initial calculations (which are no more than an educated guess based on a swatch), i should be ready to start the edging for the petite size. but i haven’t even finished my first skein yet, and the center back measurement isn’t as long as i thought it should be. that really doesn’t mean as much as it would appear, though; silky fabrics can grow as much as fifty percent during blocking, in my experience, depending on the stitch pattern, fiber content, etc. and this fabric is very stretchy.

so i’m knitting one more repeat—if it comes out bigger than what i’m aiming for, that won’t be all bad. i was hoping to be working on the edging by now—i’m holding off on sending it to the test knitters, because there is an engineering thing with the edging that i want to be sure about first. actually, i also want to see if it really needs an edging. so, i’m devoting a lot of my evening time to it this week in an effort to get ahead. 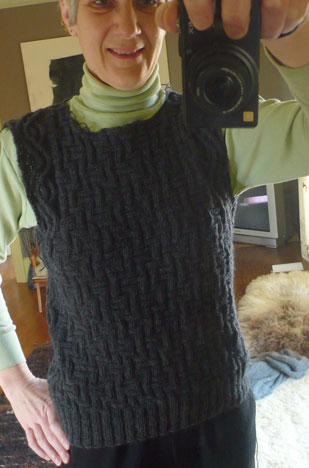 i did treat myself to some sweater knitting on tuesday night though—the front of my gray sweater was so close to being done that i couldn’t resist. i got the shoulders joined while anne marie was visiting last night, but i couldn’t try it on in front of her.

see, i’ve been concerned about the size of this sweater—on the needles it was measuring a little small and i didn’t want to show her my disappointment if it didn’t fit. but phew—once i was able to truly lay it flat, it measures a lot closer to the right size (and it will grow quite a bit when it’s washed). my plan is for it to have 4 inches of ease after blocking, based on an almost identical sweater in the same yarn that i used to own (someone whose initials are DAVID shrank it in the wash by accident. and still i wore it for a while, but we won’t talk about what that looked like).

anyway, yeah, i think it’s going to be right on target—it’s even very comfortable just the way it is, though the plan is for it to be a looser, casual fit. the shoulders will drop down about an inch or two over the cap once the sleeves are in and it’s blocked. it has a wide, gansey-style neck that will be mock-turtle height. the wide mock turtle is great for wearing a cotton t-neck underneath. next time i work on it i’ll probably do the neck, then start a sleeve.

speaking of anne marie, she came over to knit last night and brought her test knit for the highlander sweater. it’s looking great—woo-hoo. i showed her my washed and dried briar rose BFL handspun

you guys—it’s soft. really soft. and smooth and it has an incredible sheen. i can’t wait to think up a sweater for it. i don’t say this often, because i know we are all on a budget and/or a yarn diet, but if you spin—you should totally get some of this fiber. the preparation is impeccable—it spins like buttah. and of course the colorways are out of this world. if you’re waffling over colors, just pick something—they are all beautiful, trust me.

i’ve been working on a couple of small secret projects as well, so maybe that’s why it feels i don’t have much to share. by next time, though, i might have trevi done, or almost there. and maybe a new sock started or fernfrost progress. there’s always something growing. 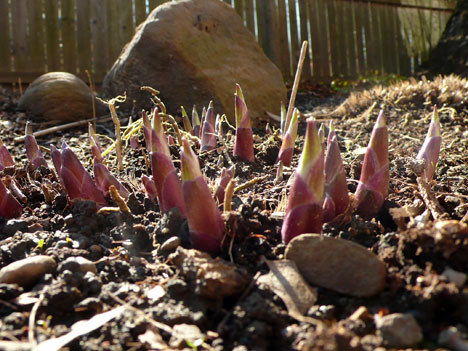