the skies are intent on sending rain today—the tension is in the air, and the light is extremely flat out there, but it hasn’t started yet. the bleeding hearts are poised to receive a shower. 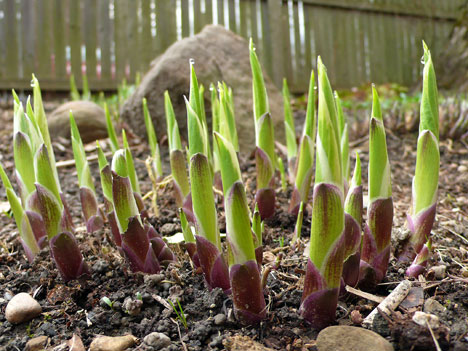 each hosta point has a droplet of water, but i’m not sure if it’s condensation or if it comes from the plant itself. i sorta wanted to taste it but then i forgot.

and seemingly overnight, the astilbe have poked out from underground, looking as if they’ll be lush and full this year. 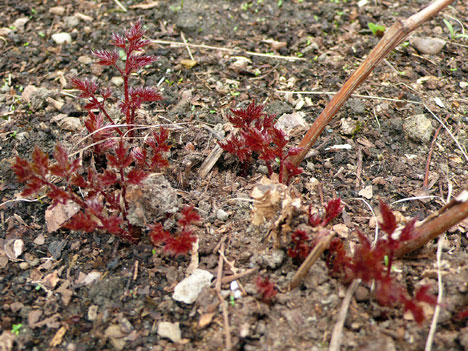 inside, we had our spinning class this morning. i began working with this gray alpaca from island alpaca company of martha’s vineyard last week 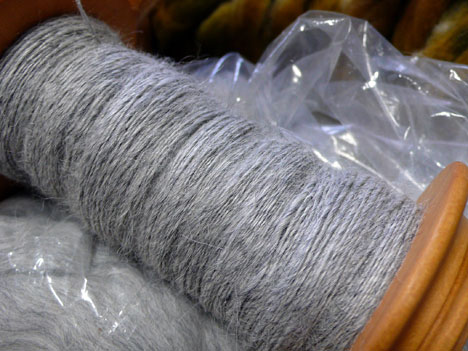 this is a gorgeously-prepared superfine alpaca top. it would be perfect for laceweight yarn if i was in the mood to spin that, but having just come off a long-term spinning project, i’m more inclined to spin something at a heavier weight. i think this will make a nice, fuzzy DK weight yarn for a super-soft hat or scarf. 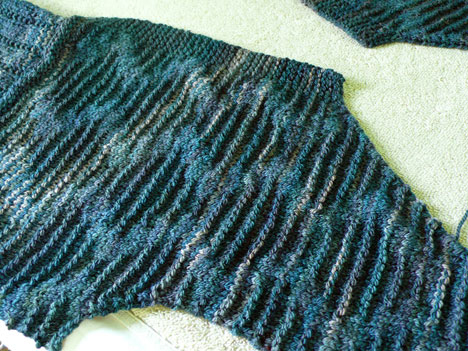 i’ve been completely monogamous in my knitting for the last few days, addicted to the ondulé sweater project. i finished the back section on friday night and joined the shoulders with a 3-needle bindoff. on saturday i set out to block the body pieces so i could proceed with the collar and have everything ready for sewing the sleeves in later on. 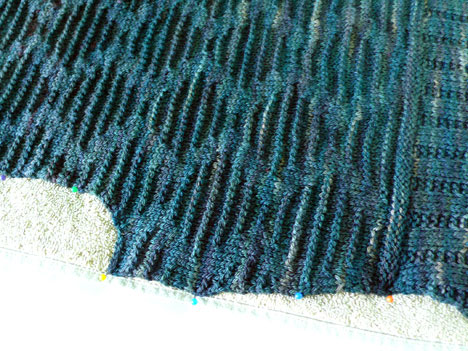 so far everything has worked up exactly to the sizes i estimated in the pattern i wrote—big sigh of relief there. so i proceeded to pin out the back to the measurements in my schematic 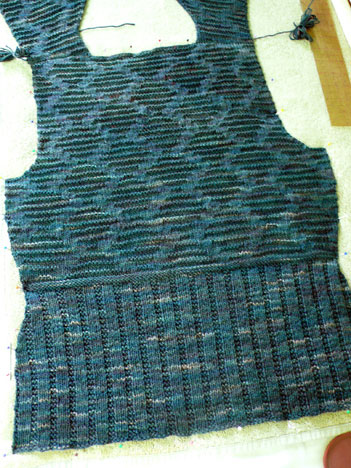 then i overlaid that with a wet towel, touched it with a hot iron to produce steam, and allowed the piece to air dry. i don’t use any pressure with the iron—we don’t want flattened texture, just generate a good amount of steam and let that do the work.

blocking the sections after they are already joined at the shoulders is slightly awkward, but not too bad. having them joined gives me the opportunity to press those seams while i have the iron on and my wet towels handy. 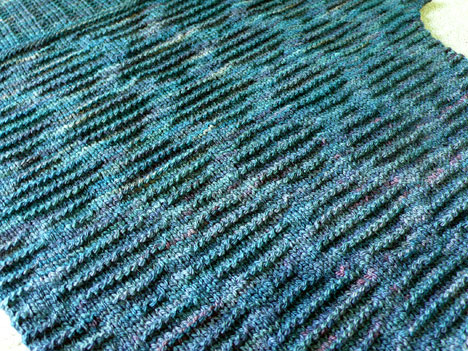 i just love the way the fabric is transformed by steaming; all the lumpy-bumpy, unironed look is gone and the pieces drape beautifully without clinging or buckling. the curling at the edges is tamed a bit too, which will help the seaming go more smoothly. 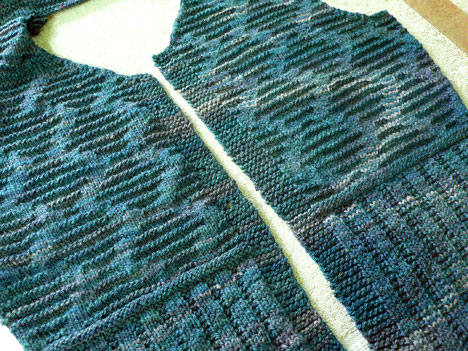 here you can see the drastic difference a little blocking can make; the texture of the right-hand, blocked piece, is still quite defined, but the “background” has smoothed and receded, while the “foreground” stands proud of the surface. 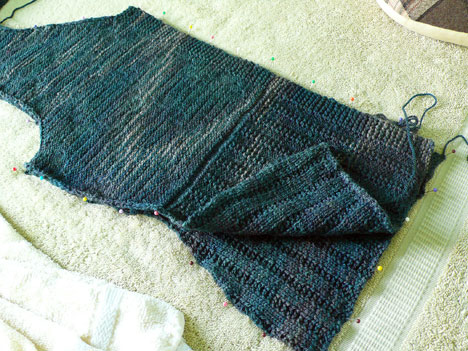 i block the front pieces the same way i block the back. once i have one front done, i pin out the second one the same, but before i steam it i overlay it with the blocked piece to make sure all the edges match, making any adjustments as needed. i’ll do the sleeves the same way when they are ready. 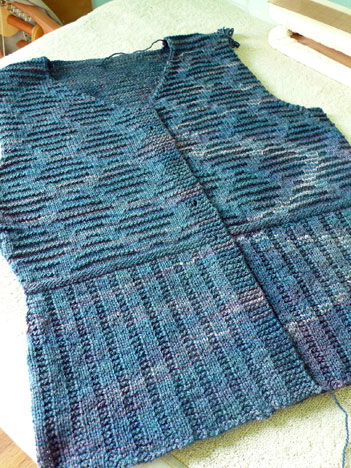 now that the body was done, i moved on to the next steps.
i picked up around the neck edge for my collar and found i had to make a couple of corrections to the stitch count in the pattern i wrote, but the construction steps worked out just right as written. by late afternoon, i had a collar. 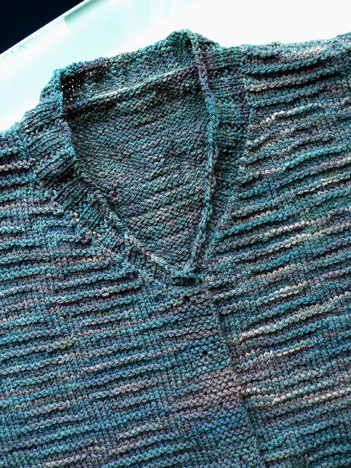 it’s not pressed yet; i’ll do that when i have the sleeve seams sewn and press all at once before i join the side seams. 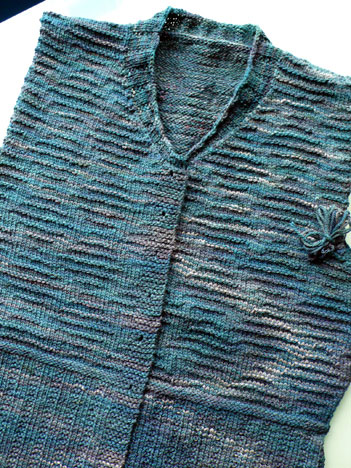 the depth of the neckline was one of the things i wanted to adjust from the original red cardi i knit a while back—it was a little deeper than i first envisioned for this sweater. this one is just what i wanted and the waist length is more to my liking as well.

i’m so excited that i’ve gotten this far that i decided to set a goal of having it done to wear to the loopy spring fling later this week. what’s life without a little pressure?

but really, i think i can do it. and it’s so compelling i don’t think i could not try for it. i started the first sleeve yesterday and i’m almost done with it—just about halfway through the cap. 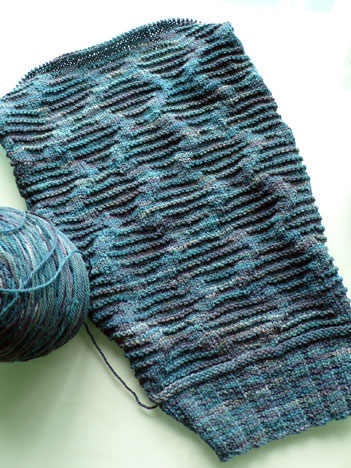 if i start the second sleeve this afternoon, i might finish it by bedtime. i might be seaming by tomorrow. i might then have time to start a new sock and/or scarf project to take on my trip.