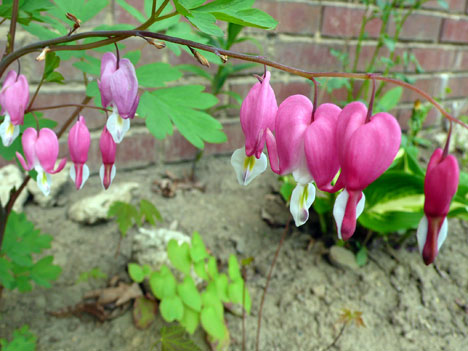 it’s that time of year when you could just sit and watch the plants grow—last week’s rain coupled with the weekend heat instigated a explosion of growth and bloom out there. now it’s raining again and cooler—good thing too, because i’ve had a lot of catching up to do this week. 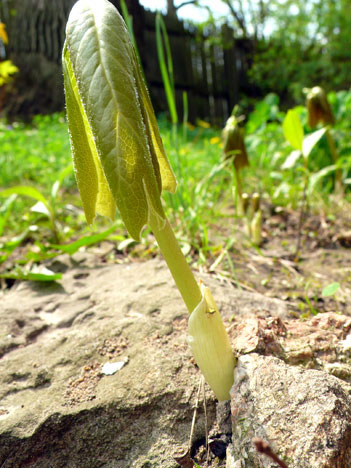 we even have live plants springing from cracks between the rocks. awesome.
david spent the whole weekend reconfiguring our vegetable plot so it would be ready for planting in a couple of weeks. last year he dug trenches in our very hard and compacted soil (that area used to be a gravel parking lot, if that gives you any idea of the soil conditions) to make rows for planting

we filled them with friable soil and that worked pretty well. but this year when it was time to start tilling some amending compounds into the soil, he realized that we had a LOT of wasted space and that the old system restricted us to planting in rows.

so he decided to dig the whole plot up (no small feat; our in-between dirt is like soft concrete and fraught with stones and roots) so that now, it looks like this 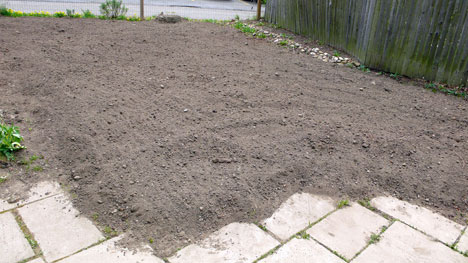 and consists of 100% plantable earth. we can have so many more things now. and watering will be easier, too. we need to let it settle, but i’m already collecting plants—my friend kris gave me some tomatoes already that are hardening on the sun porch. i do have leeks and celeriac planted in one of the lettuce boxes. there will be squash, peppers, eggplant, herbs, beets—and the asparagus is coming up (we kept that bed as it was).

we really can’t plant til at least mother’s day, when the danger of frost is mostly past. til then though, plenty of other offerings are on show 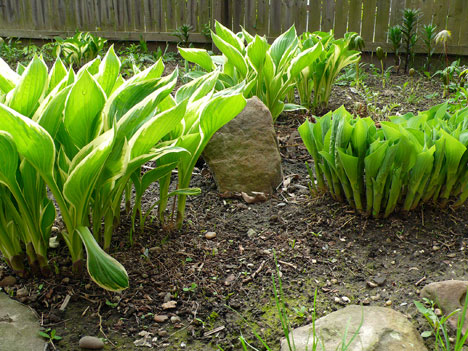 soon it’ll be completely obscured. nearby is my all-time spring favorite—the much-anticipated emergence of the fiddleheads is underway 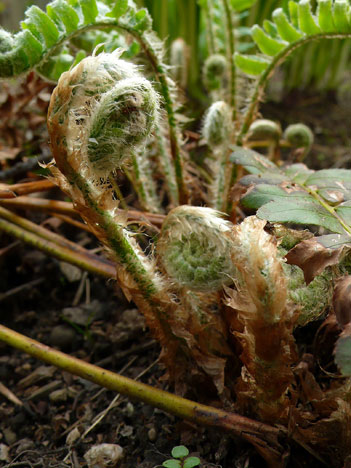 like fuzzy little chicks popping up from the nest—i just love them.

david’s double tulips are about to pop; it was very hot over the weekend but has cooled down to normal temps (50°) so the blooming is slowed enough to get some beautiful shots of semi-open flowers 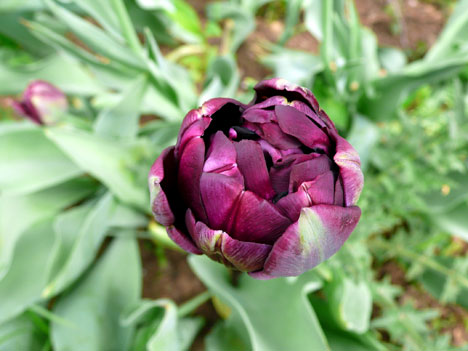 which reminds me—this is a knitting blog, heh. and i have a tulip-y sock underway so maybe this is a good time to talk about it. i finished up the first sock the other day 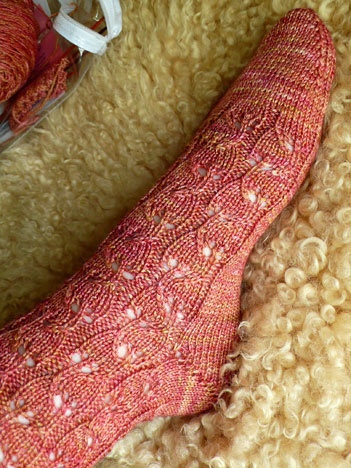 i think i should have made it a tad longer though; i may have to fix that. this knit up so fast i can’t help but be pleased and that’s not the only thing i like about it. the yarn and pattern together make a good marriage, i think—the springy, peachy-pink colors with a dash of bright green make me think of sweet peas, tulips, and all those wonderful blooms of the season.

i’m torn about the name; i’ve got two great suggestions from readers that i like equally-well:
cynthis A suggested laleh, the persian word for tulip (and so feminine)—which would honor the flower’s origins in the persian empire.

and claire offered Keukenhof, which refers to a large public garden in lisse, netherlands that features vast tulip displays. this appealed to me because the stitch pattern sort of looks like row upon row of tulips—so much so that i was even thinking at first of naming it tulip ribbons or something similar.

while i’m thinking that over, i have the second sock to knit; it’s already on the needles, ready to go wherever i go (more on that later).

have i mentioned how yummy this woolen rabbit bambino yarn is?? gosh, this stuff is just perfect for transitioning weather—it’s comfortably squishy without having any weight whatsoever. the fabric is dense and silky at the same time. and it slides right into my shoe without bunching or snagging at all. nice. 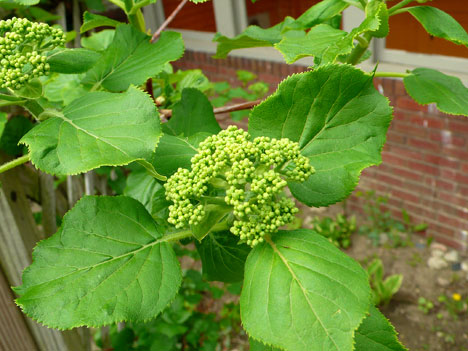 the climbing hydrangea is just covered with buds this year—hopefully we’ll see plump white flowers all over it before long. last year for the first time, we had three “blooms” on it that really looked more like dillweed flowers; i don’t know what’s normal for this plant so i’m anxious to find out if the flowers get better as time goes on. 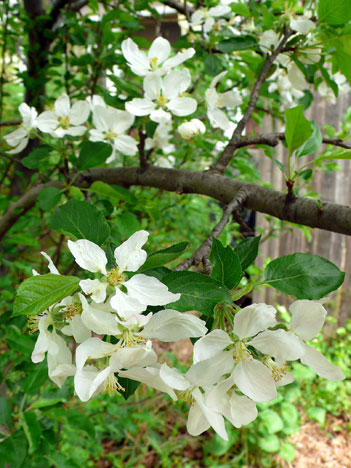 the apple tree is blooming too, but not as effusively as last year; i wonder what’s up with that? usually it’s completely covered with flowers, but not so this spring, hmm. it sems healthy otherwise; maybe i’m just missing something.

that reminds me of an FO that actually came off my needles a week ago, just before i left for spring fling. i finally got around to blocking it tuesday morning

i love the shadowing in the stitch pattern—it’s made even more apparent by the glow of the yarn itself. 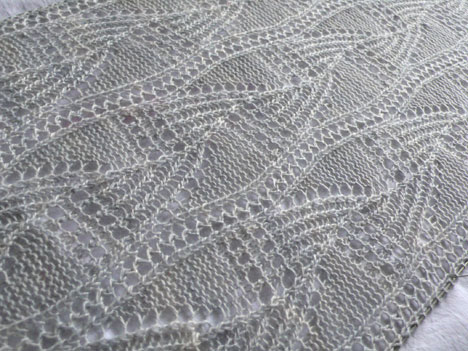 several people have written me over the last few months, asking how i thread blocking wires at the edges. the answer is, very patiently (i love blocking tasks; i don’t mind this). 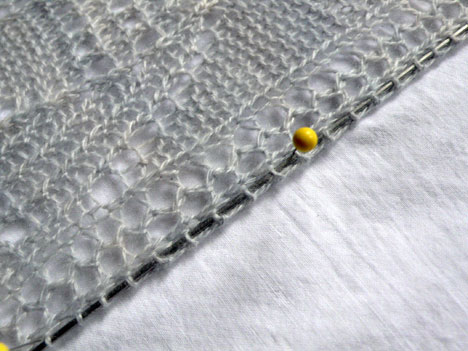 if the piece has a garter edge, even just one stitch, i can pick up the ladder that lays on top of the fabric. i like to pick up every other ladder. this gives me a nice straight edge. my garter is sorta tight at the row ends so it holds pretty firm, but if yours is loose, you can pick up a couple of sts from the edge, where it’s more stable.

once it was dry, i played dress up with it on the form and took some photos—i’ll give you a couple of teasers 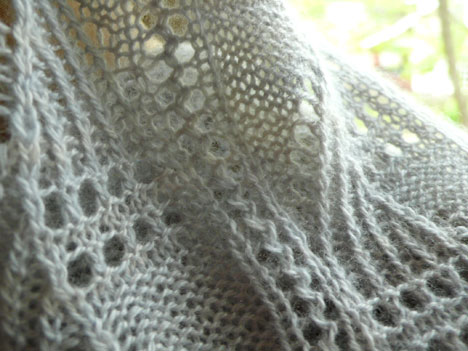 lean in close and rub your cheek—maybe you can feel it?? 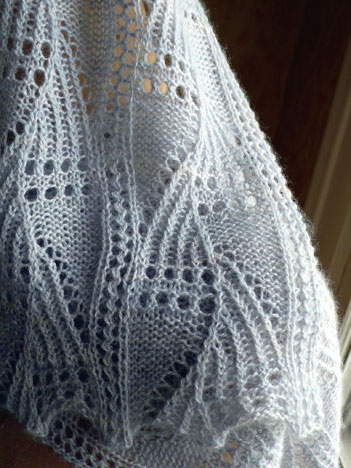 just look at how the light washes over that fabric—breathtaking, right? i so wish you could touch it. the cashmere laceweight from fearless fibers is amazing. it bloomed during the soak to offer up an ethereal halo—just enough to gather up and reflect more light. sigh.

i keep detouring to the table where the scarf is sitting, just for an excuse to stroke it.

this pattern will be released in my shop after the club kits go out at the end of may. i was thinking too, that this would be a great pattern for summery silk yarns—the twisted rib makes a nice stable fabric that would encourage stitch definition even in fibers that normally offer little that way. 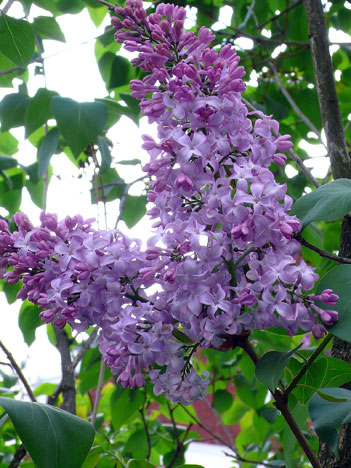 lilac is blooming—much as we love looking at it, this is one flower that both of us react strongly to. so we’re not exactly gathering armloads of it to bring in the house (been there, done that, heh).

because i need to beef up the fall supply of man socks, i’ve been working away at a new one for david (or whoever). i’ve shown bits and pieces of it but it was hard to get the overall picture from those photos

i’m working on the heel flap now, which i’m knitting in the same rib pattern as the cuff. once again i’m using grandma’s blessing—this one is headed for sock summit in august for sure. i love the colorway—it’s so david. i’m not sure which one it is—maybe this or this.

while i’m somewhat caught up, i still have lots to do—i’m trying to get ahead on pattern writing and trafficking the various stages of the sweater test knitting. lots of people involved means lots of emailing; it’s hectic. and i still need to knit.

in fact, i think today i will try to start knitting in the afternoon because i’ve fallen behind a bit. i have to get a scarf on the needles (or two). and i need to make headway on the next sweater 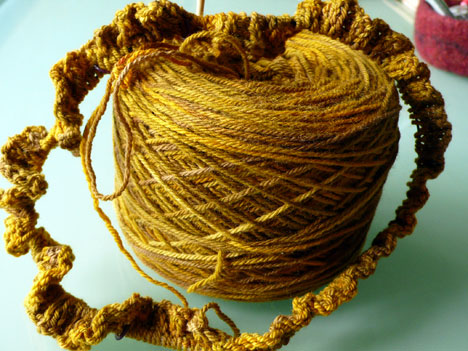 this is the re-knit of the gray maze sweater (which isn’t finished, but i need to start the new one so i can write a pattern). i cast on last night in this gold briar rose legend—a beautiful yarn i haven’t knit with before that i’m falling in love with. and this color—wow; this is an old favorite for me and one i haven’t used in ages. i knit a gansey in a similar gold-green yarn in the early 90s that i wear still, but i could use an update (the old one has the giant sleeves that were so popular back then). 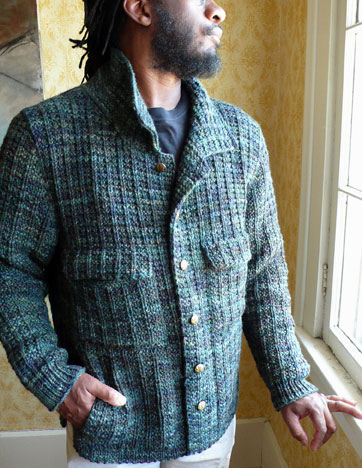 but just barely—next week i’ll need to concentrate on pulling that together for tana to tech edit and start the search for a test knitter. it’s an easy knit in heavier yarn that’s definitely jacket-weight 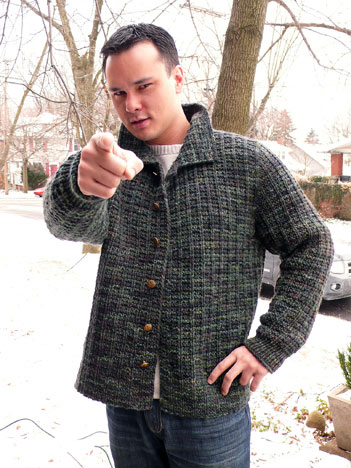 all the handsome guys want one.
that’s my nephew james who you might remember from previous posts. he’s graduating later this month and i’m very excited to report that he already landed a great job in his field (graphic design and communications)—in fact he started work on monday and he likes it a lot so far.

it’s incredibly encouraging to hear about graduates that get jobs they like—forecasts of gloom and doom for them are rampant and it can dampen the spirit of the job search. it’s demoralizing when people leave school thinking that four years of hard work is not marketable toward a satisfying job.

it sounds like he has a boss who is generous with encouraging feedback, as well. i’m very impressed by that—it means she is happy in her position, too.
why, she deserves some flowers 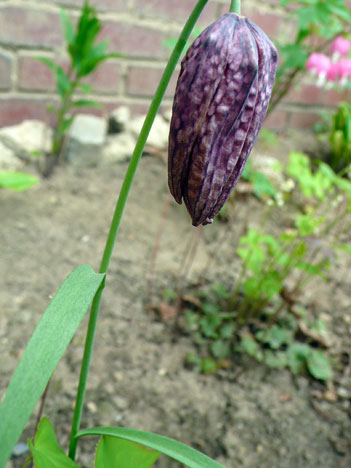 ok, well, one flower; it’s all i have left. but it’s so special—the lone checkered fritillaria in my little shade bed.

anyway, because he can’t score enough tickets for all of us to go to the graduation ceremony, david and i are heading off to see him this weekend for just a couple of days. coincidentally, he lives just a stone’s throw from the howard county fairgrounds—site of the maryland sheep and wool festival. imagine that.

he remembered that i talked about coming out for that a few times before, so he invited us to visit now, instead of at graduation, when he will only have about a half day off from work. so, i guess we’re going to be there; if you see me please say hi—i hope i see you first.

i’ll try to post something before i go tomorrow, especially if i have new knitting for you to look at. i feel bad that my posts have been sporadic the last week or so and then i bombard you will all manner of wool and flowers.

oh well, we could do worse than wool and flowers, right?