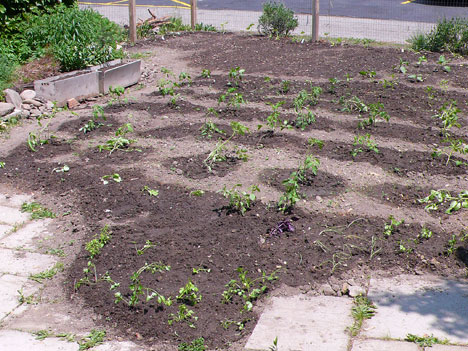 well, the garden is in—i’ve spent the last few evenings and and this morning cleaning up and getting all the plants in the ground. we reconfigured things yet again this year; david decided we weren’t making good use of the space we had so he plowed up a little more around the edges and made the whole area one big planting patch.

the front bumpout there is the kitchen cutting patch—herbs, celery, leeks, scallions, etc. directly behind them is a big patch of tomatoes that extends several rows (i once again bought too many tomato plants); i’m rotating them from their usual space at the back. behind those there is a pepper patch and an eggplant patch; out of sight to the right is the strawberry patch and the asparagus bed—still struggling along. we’re not sure why the asparagus does not come back after a good first year, but it’s happened twice now . . . and we’re still trying.

the big dark patch toward the back is my seed bed—i have all sorts of greens and beet seeds planted there. since i have more room this year i planted the greens further apart rather than broadcasting them randomly as before. this should cut down on the need to thin and allow the plants to grow bigger (provided the seeds take well).

then, along the back fence are all the squash plants; kris, beckie, and i are all trying out the idea of training them up the fence to cut down on beetle invasion; it worked well for kris last year so we’re experimenting with it more. i even have a few watermelon plants this year—small refrigerator melons for david; he really loves them.

i planted lettuce and spinach in the boxes to the left, near the dye bed. and out of sight i have another planter with jalapeño peppers in it.

that should be plenty to get started, heh.
i still have a few perennials to get into the ground, but i think i’ll do that over the weekend; right now i’ve had enough sun and dirt and bending over, oof.

needless to say, not a huge amount of knitting has gotten done in the last couple of days, but there is some 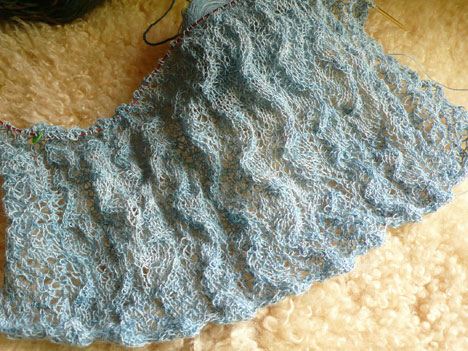 my nightingale stole is growing—seems like there is little progress when i’m knitting it, but then when i spread it out the morning after, i can see it’s getting longer. hard to believe that this will transform into a larger version of this, isn’t it? 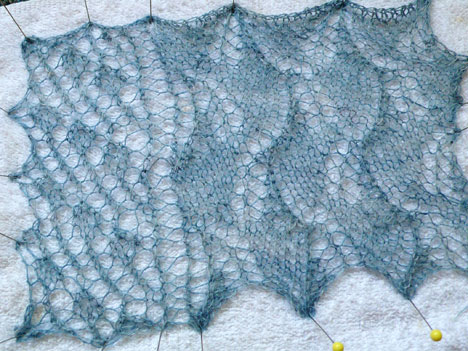 but it will. about the name—though the composition was inspired by the blooming of the lily of the valley, when i looked into using that in the name i found that there are dozens of patterns already using it. so i looked at the swatch and thought some more, and realized that the pattern also looks like the fluttering wings of a small bird—maybe a starling or nightingale. and since the yarn (alpaca lace from kristine) color is nightingale, i’m going with that for now.

my second david sock is progressing nicely, but not done yet

and somehow, though i haven’t been knitting much at all (opting instead to fall into bed, stupid-tired, at the end of the night), the maze sweater has grown a lot—i’m just a few rows from the underarm bindoff now (that cable is at the side seam, btw) 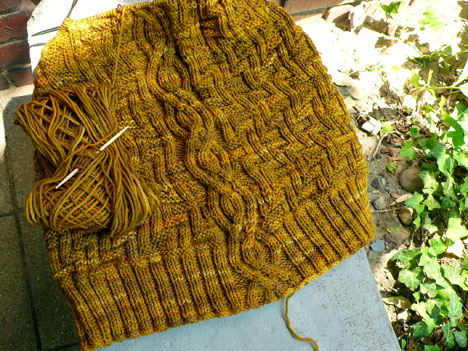 these sweaters in the round can get you that way—with rounds that amount to over 200 sts, usually, you start out resigned that you have a whole lotta knitting to do before you see much progress at all. the stretch ahead to the underarm bindoff seems interminable. you measure and measure and it never freakin’ grows.

then suddenly—usually when you’ve finally got into a groovy zen state with it—you’ve either overshot your mark (grrr), or you’re right there. i’ve stopped measuring these kinds of sweaters until i’m really almost sure it’s worth it, hehehe.

so yeah, i’ll be splitting it into two halves soon to work the armhole and shoulder area, which is often the point that these sweaters go a lot faster for a while (until the sleeves, but we won’t think about that now).

and now, before i sign off for a couple of days of holiday weekend activity and a trip to the fiber show, how about a little yarn prøn?? i knew you’d say yes . . . 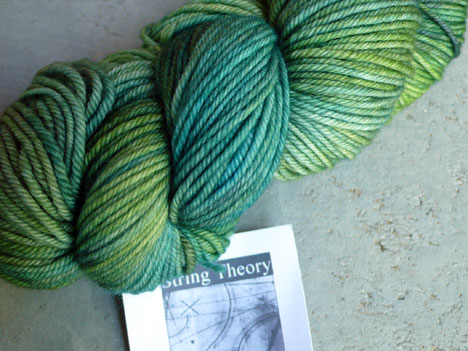 tanis and karen at string theory sent me some yummy sample skeins this week to try at some point in the near future. above we have their impossibly squishy DK merino, colorway north haven 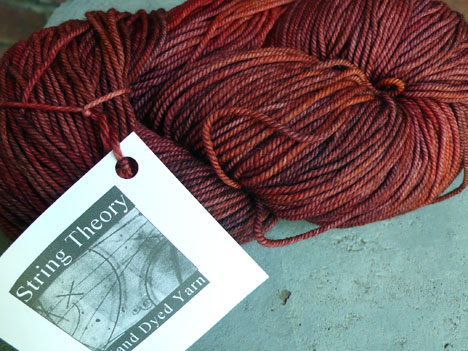 we have the delectable caper sock yarn in colorway fusion. this stuff is deeply lovable and has the best of all worlds—merino blended with nylon and a bit of cashmere, yum.

next i have something very special from great northern yarns, where craig had the brilliant idea to blend combed mink fiber with cashmere for an ultimately luxurious yarn. my friend kim in san diego is knitting a shawl from the lightweight version and we all fell over ourselves trying to sit next to it on our visit. 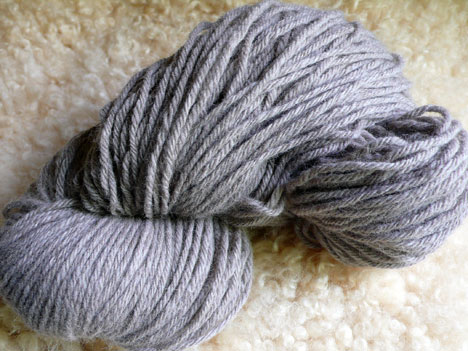 it blooms in the most lovely way as it’s knit up, creating a gorgeous halo that is nothing like anything else i’ve seen. and do i even have to say that it’s soft?? well it is—you’ll have to trust me, it’s softer than soft. use your imagination and go as far as you like, hee-hee!
this is the DK weight yarn in the natural brown colorway; currently he also has black, but will soon be releasing a line of dyed yarns. we can’t wait, right??

ok, now, we have a dinner date at a great restaurant with dear friends tonight and i just happen to be ravenously hungry. in fact, i skimmed this post but didn’t rally proofread it—please forgive any errors . . .
i’ll try to be back maybe sunday, but probably, it’ll be monday.
have a wonderful holiday weekend.